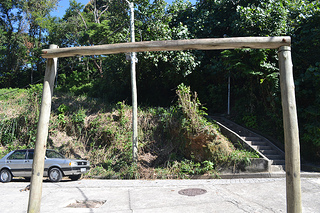 Dull concrete, broken equipment and sparse vegetation compose Vidigal‘s official “Ecological Park.” Like many residents, Felipe Paiva of Cidade Unida (“United City”) wasn’t impressed. His voice carried more than a hint of irony as he detailed its construction: “The Prefeitura (City Hall) tore down some buildings to clear out this square, left the trees around the edges, and called it an ecological park.”  An unfinished swing set framed the scene in tired themes of half-hearted government investment that define too many favela communities. But Felipe continued on a brighter note: “Down there, residents built a proper ecological park for ourselves.” 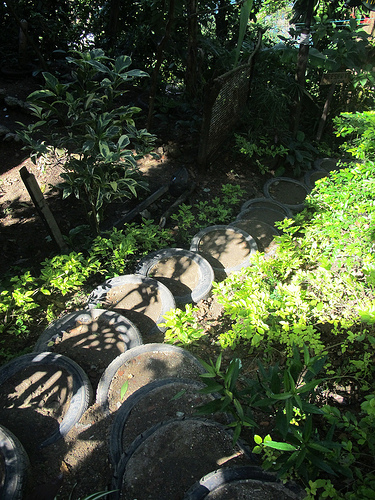 After our group’s descent down a staircase neatly laid out from discarded tires, the contrast between the two efforts was striking. A rich composition of plant life and clever ornamentation welcomed us to Sitiê, a community-built ecological park situated along the slope of Morro Dois Irmãos (“Two Brothers Hill”). Beside the inviting entrance arch, leaves sprung out of the soil filling old ceramic toilets; yellow butterfly wings fluttered lightly from perch to perch; and a plant comically named saco-de-velho (“elderly sacks” is a polite translation) ballooned and glowed half-transparent in the sun.

Straddled by a view of the ocean on one side and a forested hill towering above on the other, Sitiê’s location almost seems like too easy a choice for this kind of scenic project. But less than a decade ago, few would have imagined a park like Sitiê being built where it is now. What was originally part of the Atlantic Forest had been transformed into a trash deposit by years of waste and neglect. Vitor, one of Sitiê’s founders, told us of dead refrigerators lying amid an acre of filth – and of the original band of five who decided to clean it up.

“We performed a liposuction of the earth,” he said, recalling days in the hot sun surrounded by the smells and textures of garbage. The small group of founding voices eventually inspired the critical mass of a mutirão: a multitude of community members working together to accomplish the task at hand. It was all manual labor, he explained, bare hands and bare feet clearing out a staggering volume of garbage, 12 tons in all, powered by nothing but solidarity and the desire for a relaxing and green leisure space. With the land finally cleared, the garden and reforestation were achieved through community support and plant donations from Rio de Janeiro’s Botanical Gardens. 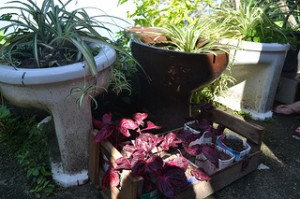 The amount of foreign press that the Rio+20 conference brought to the city and to the issue of environmental sustainability has triggered an unprecedented flood of media attention to Sitiê. Though the recognition is flattering, Vitor shared his frustration about the outcome of those interactions. “People come in with cameras, take three hours of our time and energy, and leave without offering any support or resources,” he said. When asked about the idea of monetizing their project, Vitor was open but hesitant. “We didn’t do this for money,” he said. “We’re open to donations, but all I wanted was a good place to have a caipirinha and listen to some calm music.” He also voiced some speculation about the government stepping in to appropriate some of Sitiê’s achievements for itself under the pretense of integration. 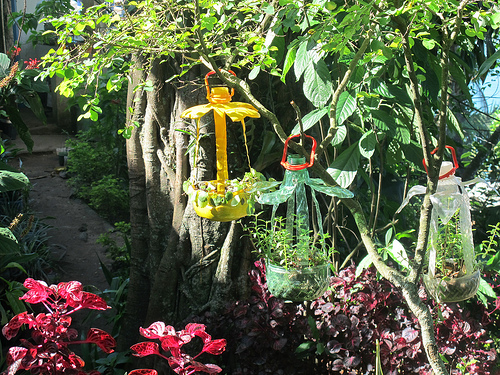 The past, present, and future of Sitiê embody some pressing issues faced by Vidigal and many of Rio’s other favelas. At the most obvious level, the environmental destruction and accumulation of garbage that necessitated the mutirão is far from an isolated incident. During our exit, just minutes down the hill from Sitiê, Felipe brought our attention to a valley of garbage that was accumulating just below our vantage point. “This was a river in the eighties,” he said, “but people kept throwing trash into it and eventually it just dried up.”

Layers of neglect by uninformed residents and an absent government have fed into this problem. Though trash bins and garbage collectors exist, their services are not nearly extensive enough to keep the situation from worsening. On rainy days, bags of trash can be seen sliding yards down the winding hill. “It’s a filthy place,” said one resident who caught us during our walk up the hill earlier that morning, “and it’s only getting worse. People from outside come in to admire the good parts, but the truth is that it’s a mess.” 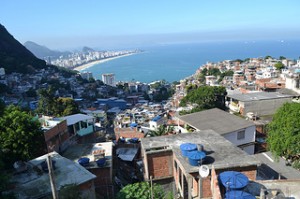 That last sentence, along with the increased media attention Sitiê has attracted, brings us to the other side of the difficult position in which Vidigal finds itself. As Vidigal’s stunning heights, coastal views, and ecological spaces become better known and desired, demand for housing heightens and prices rise beyond the range of what many residents are able to afford. Expanded provisions may contribute to this progression. The situation is one that calls for careful attention to both sides of the equation: for both residents and government to work together to improve the quality of life in Vidigal, and at the same time pursue mechanisms to keep prices stable and affordable. 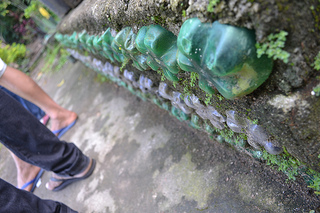 Sitiê continues to tackle the first part of this equation, cultivating a culture of environmental responsibility by the promotion of community participation and the sheer energy of its presence. These ethics are present in the used bottles that make for ornamentation and on the wall of writing that loudly proclaims, “A natureza depende de você!” (“Nature depends on you!”) Children were laughing and playing amid the plants and the windchimes during our visit – children to whom Sitiê offers its gardening classes. And Vitor, recalling his own body’s resilience to the waste and the heat, asserted: “I’m immune to accidents. The earth protects whoever takes care of it.”

This article was written by Rexy Josh Dorado, and published on July 5, 2012.
in Interviews & Profiles, Policies, Solutions, Sustainability

At the most basic level, I am attracted to individuals and institutions fighting for change, for the flourishing of their own potential, for a better life and for a world in which (in the words of Paulo Freire) "it is easier to love." My work springs from questions of freedom and opportunity, as well as the mechanics through which ground-level dynamism is transmitted to wider-scale growth. And the conflicts that emerge from this fold: between the powerful and the oppressed, the privileged and the marginalized, the comfortable and the dissident.