This is the second article in a two-part series on the demolition of the former IBGE (Brazilian Institute for Geography and Statistics) building. Read part one here.

From slavery to occupation

One thing that Rio de Janeiro Mayor Marcelo Crivella seems to forget is that the senzalas (slave quarters) of the past, just like today’s occupations, were not merely dirty dwellings with no water but they were also places full of culture and resistance. These places have a profound political significance, of which those enslaved in the past and today’s occupants are much more conscious than Crivella appears to realize. Enslaved populations fought for 350 years in Brazil to gain their freedom through daily acts of resistance, rebellions, escapes, and the creation of quilombos. To invoke the memory of slavery without recognizing this is to perpetuate a very limited view of history. This passive and victim-oriented view of enslaved populations does a disservice to the centuries of resistance by Brazil’s black and indigenous populations, who even today struggle to survive, be recognized, and keep their cultures alive. Similarly, calling former IBGE occupants ‘slaves’ is to use a reductive term that fails to recognize the survival strategies, immense inventiveness and resilience that characterized life within the occupation, not to mention the active political consciousness and pride that some residents felt when they conquered a space for themselves and transformed it into a home. If the mayor insists on referring to an image of slavery to talk about housing, rather than invoking slave quarters it would be more appropriate to compare occupations to quilombos.

Contrary to what Crivella appears to believe, there are better words to describe ex-residents of the former IBGE building than ‘slaves.’ A much more objective alternative would be the word ‘occupiers,’ a term that not only implies a certain individual sovereignty, an active role, and open possibilities but also recognizes the political nature of occupying abandoned buildings. Similarly, the mayor frequently uses the word ‘invasion,’ which tends to criminalize the practice of occupation by focusing on irregular or illegal aspects instead of the struggle for land rights. In place of ‘invasion,’ he could opt for the term ‘occupation,’ which recognizes the act of occupying otherwise vacant buildings as a legitimate—or some would say, necessary—strategy for less privileged groups in society to have a place to live.

Owing to the history of dramatic land inequality in Brazil, it is constitutionally illegal to leave a building abandoned unless it fulfills a social function. Criminalizing the homeless who occupy vacant spaces to guarantee their right to housing—without recognizing that abandoning buildings in Brazilian city centers is illegal—absolves the building owners from their responsibility and places the blame on the victims. Words have power; they shape the imagination and form opinions, which is why it is so important to be aware of the political implications of word choice. As a politician and a man of faith, Crivella should be acutely aware of this.

In reducing the former residents of the IBGE Occupation to the status of slaves, Mayor Crivella chose to cast them in the distant past instead of situating them in the present context of Brazil’s housing crisis. This crisis is one of the most severe in the world and will only be resolved through concrete policies. Today there are more than 6 million homeless Brazilian families and yet there are more than 7 million empty buildings. In other words, the housing deficit is not due to a lack of space or buildings for people to live in; it’s a problem of resource distribution. Wealthy landowners including various government entities abandon their properties in a bid to create scarcity and thus increase the value of their property, the age-old game of real estate speculation, which has made Rio one of the most expensive cities in the world to live in today. This phenomenon, hand in hand with the deeply unequal economic system, produces and reproduces segments of the population so poor they cannot rent or buy a house, even if they work their whole lives.

There is a clear line of historical continuity between slavery, the lack of socioeconomic integration of the freed black people following the Lei Áurea (abolition of slavery, known as the Golden Law), and the current housing deficit that most directly affects Brazil’s poorest classes and in particular black women. One thing cannot be disassociated from the other. Similarly, one cannot compare the homeless to slaves without acknowledging the political and economic factors that generate the level of misery found in the IBGE building, and which leave 10% of Brazilians homeless. These elements are all fruits of the concentration of wealth in the hands of a few who would rather leave buildings empty than share what they have with the millions of Brazilians who lack a place to live.

The Golden Law to abolish slavery unquestionably deserves to be celebrated by all Brazilians. It was necessary and indeed legally abolished the indefensible and inhumane practice of slavery. However, the law created a false sense of comfort as it failed to deliver on its promise to effectively grant freed slaves the same rights as the rest of the population. Abolition was adopted mainly due to external economic pressures (principally from England) and not because Brazil’s ruling class spontaneously agreed to share their privileges. This meant there were no concrete measures put in place to effectively include black people in the formal economy or give them access to decent housing. As such, in spite of abolition, the social order in Brazil continues to this day to have its roots in racism and slavery.

When Princess Isabel signed the law in 1888, she made much more of a symbolic gesture than effecting any profound social change in Brazil. 130 years later, the demolition of the former IBGE building by Mayor Crivella is likewise little more than a compelling symbol. His true commitment to housing issues remains the real question. The social rent subsides of R$400 per month that the City has offered to ex-occupants—until the new Minha Casa Minha Vida apartments are ready—is an extremely low amount for renting an apartment in Rio, even in favelas. Many of those who were removed from the occupation are now in a precarious situation, possibly more precarious than prior to the building’s repossession. According to the president of the Mangueira Residents Association, Washington Reis, approximately 20 families were not compensated by the City and some are living under the Mangueira Viaduct, near the former occupation. And for those who were registered, the fact of getting an apartment in a housing complex will not be enough in itself to fully integrate them into Brazilian society, unless the housing project is accompanied by a series of other crucial initiatives.

Different from what the Brazilian State did in the decades following the abolition of slavery, Rio’s municipal government should guarantee health, educational, and social services for these families for several years after they receive housing. Having lived on the margins of society for decades, if not always, many families will need assistance to cover the new expenses and demands of the Minha Casa Minha Vida program: condo fees, electricity, water, gas, etc. Without this help they will likely not be able to keep up with this way of living and as a result may return to a precarious life, as has happened to many Minha Casa Minha Vida beneficiaries in recent years. It is also important for the City to think about how to create jobs and support small-scale entrepreneurs, as well as guarantee the long-term maintenance of its buildings. Without these actions, the demolition of the IBGE building and construction of new Minha Casa Minha Vida housing in its place will be no more than a symbolic gesture. There will be little long-term impact other than to strengthen the construction sector while deepening social inequality.

The mayor bet on the political and electoral capital deriving from an impressive media campaign around the demolition of the old IGBE building and positioned himself as the main protagonist in a housing project that many in Mangueira have been waiting for for a long time. Yet it’s worth remembering that Minha Casa Minha Vida is a program of the federal Caixa Econômica bank, with funds and operations managed at the federal rather than municipal level. The role of the City is limited to choosing the participating families and coordinating their registration. Moreover, since the start of Mayor Crivella’s term in office, his action on housing has amounted to little more than empty promises, many of which have involved evictions and grand statements.

It therefore remains to be seen whether the mayor’s role will move from the superficial level of spectacle and cliché to real engagement with the IBGE families and the hundreds of occupations and thousands of tenements. In the case of the old building in Mangueira, demolition was necessary for security reasons since according to a Municipal Civil Defense report it ran risks of collapse or fire. In fact, there are many similarities between the IBGE Occupation and the Wilton Paes de Almeida building, an occupation in São Paulo which tragically collapsed on May 1. It is notable that neither of these occupations was led by well-known social movements. Apart from these exceptions, for the majority of occupied buildings the best solution, instead of demolition, is often to restore and upgrade the buildings for the purpose of affordable housing, as in the case of the Manoel Congo Occupation in Cinelândia. This, of course, is less mediatic and dramatic than demolishing buildings, and demands significant investment in order to make these places safe and adequate for housing. This option also does not particularly favor the construction industry, a traditional political partner of Rio’s mayors. It also requires a constructive dialogue with social movements that are active in various occupations and generally understand occupiers’ daily reality and needs much better than the city government does. Officially recognizing occupations—treating occupants with respect and recognizing the political legitimacy of the act of occupying—and supporting them to become legal and dignified living spaces would be a truly constructive way for Crivella to respond to the gravity of Rio’s housing crisis.

Slideshow of the implosion of the former IBGE building [also on Flickr]: 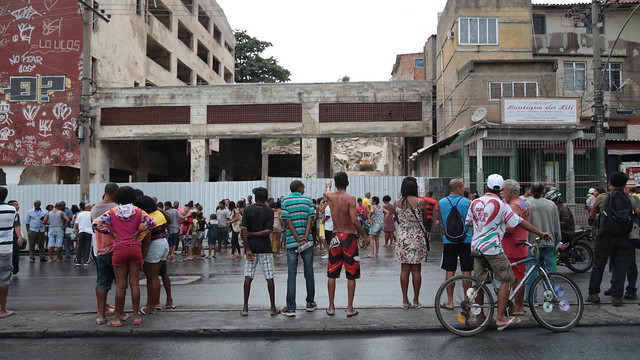 This is the second article in a two-part series on the demolition of the former IBGE (Brazilian Institute for Geography and Statistics) building. Read part one here.

Émilie B. Guérette is a Canadian anthropologist and filmmaker based in Rio de Janeiro. She directed the full-length film O Outro Rio, filmed at the IBGE Occupation in Mangueira during the Rio 2016 Olympics. Together with her colleagues John Burdick and Rolf Malungo de Souza, she is part of the ethnographic research team Luta Pela Moradia No Centro Da Cidade (Struggle for Housing in the City Center), which accompanies various popular housing projects in Rio’s Centro region.