On Monday morning, representatives from Rio’s electricity supplier, Light, arrived unannounced at the headquarters of socio-environmental NGO Verdejar with a judicial notice for immediate eviction to clear the land for a new substation. Members of the 15-year-old non-profit were taken completely by surprise and could only watch as Light, who arrived accompanied by military police, a moving truck and several workers with sledgehammers, demolished their headquarters.

Located at the foot of the Serra da Misericórdia, the largest patch of Atlantic Rainforest in Rio’s North Zone, Verdejar have worked to protect the area from illegal occupation in the past, managed to reforest significant parts of the decimated landscape and use permaculture and agroforestry to produce organic fruit and vegetables for communities in Engenho da Rainha and Complexo do Alemão. Founded by the late, enigmatic Luiz Poeta in 1997, the NGO’s work has been recognized internationally. They co-organized the People’s Summit in the Favelas during the recent Rio+20 UN conference.

Despite having meetings with Light and the city authorities last year regarding the possibility of a substation in the area and assurances that they’d be informed of the process, Verdejar received no warning of Monday’s action. The NGO also alleges that Light falsified documents requested by the judge confirming the land as unoccupied. 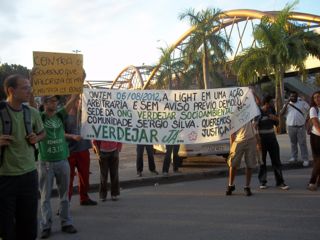 Luiz Poeta’s daughter, Luara Marins, says “We feel violated and very sad because of the lack of respect. We didn’t have any forewarning. We had no idea what was happening. They behave as if the NGO didn’t exist. It’s incredible because the NGO pays its Light bill but Light put it as though there wasn’t anything there. We feel a great lack of respect for the all the work Verdejar has done in the area in the last 15 years.”

Despite a Code of Ethics that highlights its dedication to environmental sustainability, just social practices, and a commitment to “maintain an open and constructive dialogue with civil society organizations,” Light justifies its actions stating that the substation will meet growing demand in the region and serve around 200,000 people and says that forewarning and dialogue wasn’t a requirement because the land doesn’t belong to Verdejar. Eduardo Carvalho from Light’s press office says, “The NGO doesn’t have any legal connection there. In the case of this legal proceeding, there isn’t need to advise because the NGO isn’t the owner of the land. The interested parties are Light and the real owner of the land, Imobiliaria 19 de Novembro.”

In the fight to recover the place where the organization was founded and to advance negotiations over the protection of the Serra da Misericórdia, Verdejar met with Rio’s Environment Secretary, Altamirando Fernandes Moraes yesterday with Verdejar supporters outside demonstrating their indignation over Monday’s demolition. Speaking after the meeting, Verdejar co-founder Edson Gomes said: 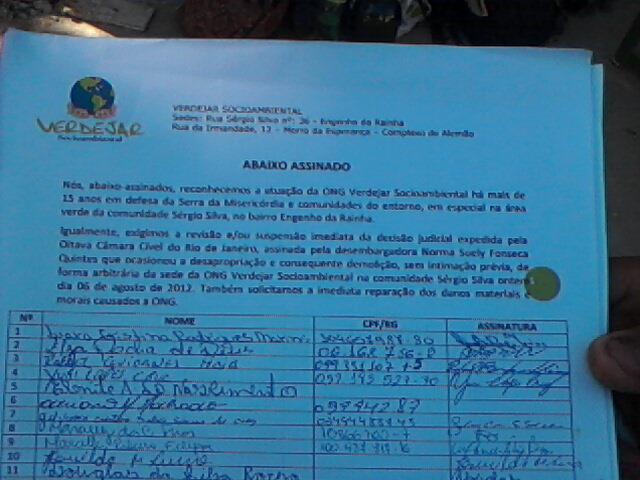 “Today we managed to get a move forward from the city authorities that they’ll work to create an advisory board for the APARU, Area of Environmental Protection and Urban Recuperation for the Serra de Misericórdia. The Environment Secretary also committed to call in Light and Verdejar and mediate a dialogue in this conflict. Today we achieved a small victory that’s important to realize our dream for the Serra da Misericórdia, a step forward in the creation of an advisory board for the APARU which we have been demanding for 12 years.”

Edson continued: “We’re alert. We’re not going to rest while this advisory board isn’t officially decreed, and we’re going after Light for compensation for the moral and material damage they caused. We’re going to demand, via the Public Defender’s Office, the inclusion of Verdejar as part of the judicial process that Light perpetrated to get the land issued for use.”

With a positive outcome from the meeting that inspired cheers and hugging amongst Verdejar and their supporters, the organization is looking forward to establishing an advisory board for the park and expect technical inspections from the Secretariats of Housing, Works and Environment and Caixa Econômica who will release the R$15million marked for the development of the area.

In regards to Light’s actions, Edson was clear: “The fight against Light isn’t over. We’re organized and it won’t be easy to walk over us. We’ll be there to show this company that they can’t treat the population the way they treated us.”