Last Friday morning, July 27, activists and audience members filed into the National School of Law at the Federal University of Rio de Janeiro (UFRJ) in downtown Rio for the final day of Julho Negro (“Black July”) events. Four panels took place, bringing together activists and organizers from around the world to discuss militarization and its pertinence to their respective and collective struggles.

The day began with an opening talk on the global impact of increased militarization in oppressed communities, particularly highlighting the international reach of the Israel-based weapons industry—from the United States to Brazil and Central America. The panel included local activist Maria Dalva da Silva, who lost her son to police violence in Rio’s Borel favela and now lives in Maré and is a member of the Network of Communities and Movements Against Violence, alongside activists from Israel, Palestine, and Argentina. The theme of the second panel was the Latin American Context, gathering activists from Mexico, Honduras, Chile, and Colombia to speak about resisting militarization and racism in their own communities, and how their struggle relates to the occupation of Palestine—the recurring theme throughout the day.

The Latin American Context panel welcomed activists Sonia Lopez from the Joel Sierra Human Rights Foundation in Colombia, Francisco Gamez from the Committee of Popular and Indigenous Organizations of Honduras (COPINH), Onésima Lienqueo from the Pichi Newen Mapuche Organization in Chile, and Daniela Gon from the Observatory of Peoples’ Rights in Mexico. The discussion was moderated by Oscar Vargas, spokesperson for Boycott, Divestment, and Sanctions (BDS) – Colombia. The panel began by allotting fifteen minutes to each panelist to discuss their role in resisting militarization with regard to their respective organizations and communities.

Daniela Gon used her time to stress the importance of international solidarity with Palestine and with all people fighting militarization around the world. She also spoke about Mexico’s fight against drug trafficking, which has resulted in over 30,000 missing persons, in addition to many more whose violent disappearances were not recorded or investigated. She mentioned that in the context of the increasing militarization of the United States-Mexico border, the use of military technology is much like that employed at the West Bank Barrier. The parallels between the narratives of Mexico and Palestine reflected the theme of international solidarity, further emphasized in a video shown by Gon about the work of the Mexican Observatory for Peoples’ Rights.

The conversation then shifted to the topic of indigenous autonomy as Onesima Lienqueo’s time began, with an explanation of the Mapuche indigenous community’s struggle for recognition in southern Central Chile. According to Lienqueo, the government’s refusal to recognize the Mapuche community as a nation has led to militarization and the criminalization of the movement for autonomy. This has resulted in violence against its members such as 17-year-old Brandon Hernandez Huentecol, who was shot by police in 2016. On a similar front, the Committee of Popular and Indigenous Organizations of Honduras—represented at the panel by Francisco Gamez—works to defend the environment and improve living conditions for indigenous populations. Both Lienqueo and Gamez highlighted the struggle to keep indigenous culture alive in coming generations and the ongoing fight for land and resources, which as moderator Vargas mentioned, resonates with the occupation of Palestine. “The Mapuche cannot live without land,” said Lienqueo.

The final speaker, Sonia Lopez, talked about the issue of police and political corruption in Colombia. Thousands of Colombians have faced forced displacement as the government continues to seek control of the Pacific Coast region. Lopez mentioned that the various methods of corruption in Colombia are linked to the global reach of the Israeli weapons industry, such as the use of Israel-produced technology by the Colombian army. Afro-Colombian and indigenous communities have been greatly affected by the forced displacements—the two groups comprise 10% and 3%, respectively, of the roughly seven million displaced persons in Colombia, according to the United Nations High Commissioner for Refugees. Lopez concluded by explaining the importance of the Boycott, Divestment, and Sanctions movement as a way of standing in international solidarity with Palestine, calling it “an exercise in popular solidarity with Palestine and all peoples that resist imperial intervention in the world.”

The panel closed with words from moderator Oscar Vargas about various public and private corporations that are involved in or contribute to the Israeli occupation and militarization throughout Latin America. He gave the example of Hewlett Packard, a well-known tech company with widely used products whose technology contributed to the deaths of four Palestinian boys on a Gaza beach in 2014. Vargas stated: “A few days ago, we commemorated the fourth anniversary of the assassination of four boys on the beaches of Gaza, killed in a strike with technology from Hewlett Packard.” 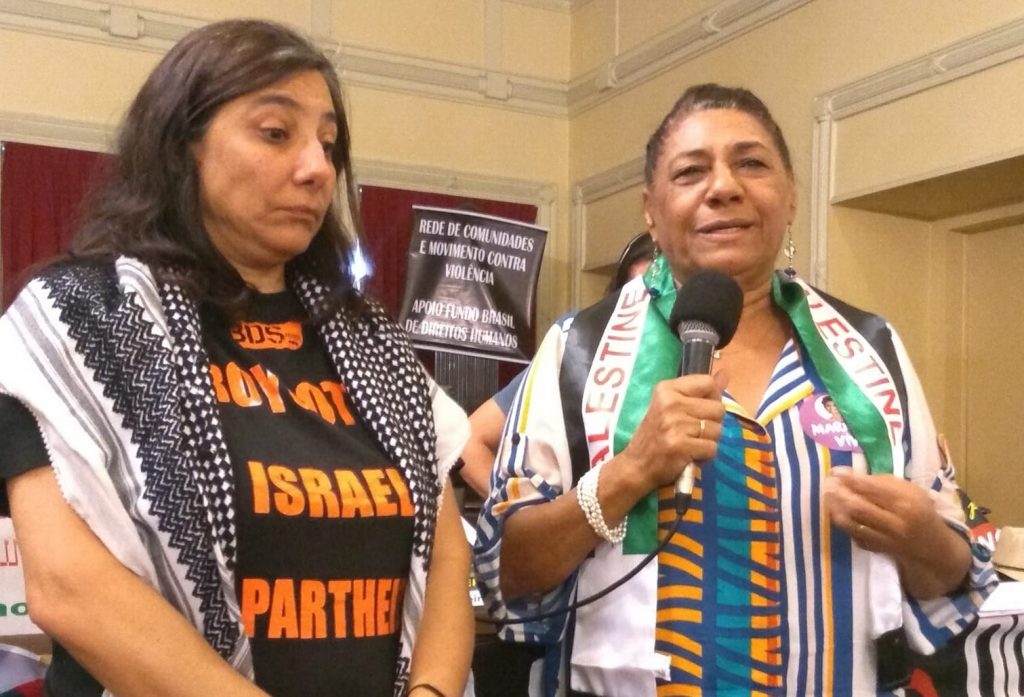 The morning activities concluded with an emotional homage to Marielle Franco. The late councilor’s mother Marinete da Silva was embraced by panel attendee and journalist Soraya Misleh. The two spoke about the similarities between Palestinian and Brazilian mothers who have lost their children due to militarization and racism. The room was filled with applause, emotion, and chanting: “Marielle, Presente!”