Friday, July 27 marked the final day of the third annual Julho Negro (“Black July”). This year’s event sought to bridge international struggles against human rights violations, building on the solidarity fostered through the participation of activist movements from the United States, Mexico, Palestine, and Haiti in previous years. This year, as activists from Brazil, Palestine, India, Argentina, South Africa, and other countries recounted, growing police violence against the poor and people of color is a global phenomenon.

Concluding a week of demonstrations and debates, activists gathered on the last day of the event to discuss what they see as the role of the Israeli government in supporting human rights abuses in their various contexts. The discussions specifically focused on the Israeli arms trade and the ways by which it enables militarization and human rights violations around the world. 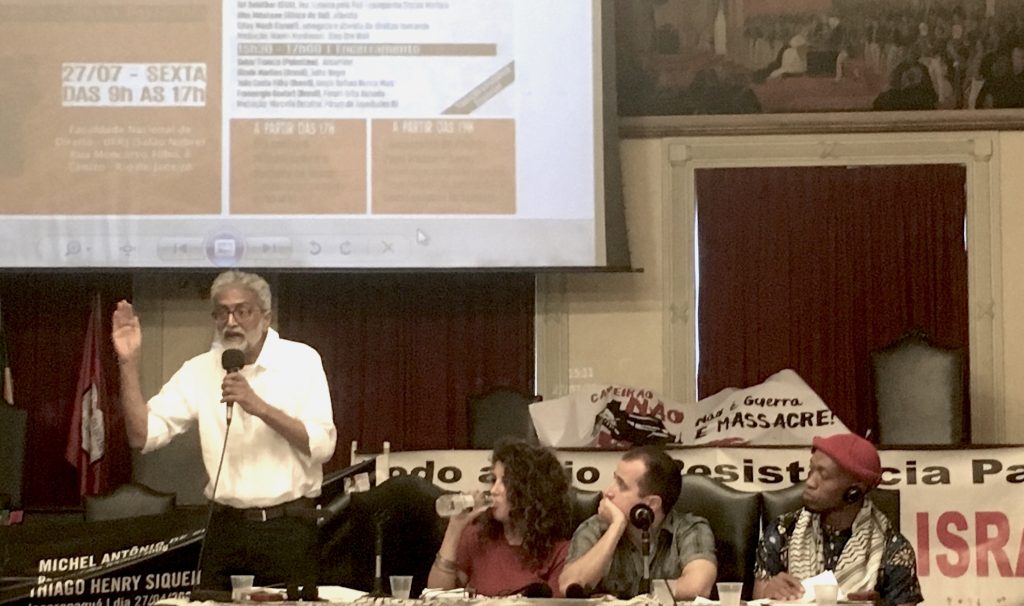 The afternoon began with a conversation among a group of activists on the role of Israeli weapons and training methods in their respective countries. Gautam Navlakha, a lawyer and human rights activist, highlighted violence committed by police against civilians in India, citing a recent event in Tamil Nadu in which police opened fire and killed twelve unarmed protestors. Navlakha also discussed the dire state of police militarization and violence in Kashmir, describing it as a region that has been under siege for decades. Similar to the situation in Rio’s favelas under the federal military intervention, the heavily militarized occupation in Kashmir impacts nearly every aspect of residents’ daily lives.

Following Navlakha, Alex Mdakane of South Africa discussed his country’s history under the rule of a militarized apartheid government. As described by Mdakane, the apartheid-era South African regime maintained a mutual, security-based relationship with the Israeli government, while it publicly criticized the apartheid system. Since the democratic transition and end of apartheid rule, South African society has remained both heavily militarized and heavily divided. As in Brazil, there is a potentially explosive combination of highly unequal land distribution and extreme militarization.

Finally, two Israeli human rights activists spoke about their own experiences fighting for human rights in Israel and Palestine. Eitay Mack relayed his experience as a lawyer defending Palestinians in civil lawsuits against Israel. He also discussed the wide reaches of Israel’s strategic arms trade. For Israel, Mack explained, selling arms is not only a matter of economic profit—it is also a strategic tactic to essentially buy alliances by fostering reliance from foreign governments. According to Mack, the Israeli arms trade—as well as the militarized occupation of Palestine—has only grown as Israel has seized global anxieties to stigmatize and criminalize Palestinian dissent, first through the “War on Terror” paradigm and now through growing right-wing xenophobia and Islamophobia.

Following Mack, Shahaf Weisbein, a representative from the Coalition of Women for Peace in Israel, spoke from a feminist perspective on the gendered aspects of the Israeli occupation. As the only woman on the panel, Weisbein spoke to both the importance of looking at the disparate impact of the occupation on women, as well as the Israeli government’s massive public relations campaign to be seen as a champion of women’s and LGBT rights and “the only democracy in the Middle East.” She described phenomena familiar to any favela resident: a city that wraps itself in rainbow flags and touts its LGBT-friendly tourist industry, meanwhile disguising discrimination and human rights abuses committed against certain segments of society. In Rio, these rights violations include the militarization of life in favelas; rampant extrajudicial killings of black men, resulting in immense and unique burdens placed upon women and children; a mass abusive incarceration system that perpetuates the cycle of violence; and forced evictions that deprive families of their homes and communities.

The State of Human Rights in Rio de Janeiro and Brazil

Finally, in the closing panel, Brazilian activists spoke on the state of human rights in Rio de Janeiro and in Brazil as a whole. The first speaker was Elisa Quadros, one of 23 political prisoners arrested during the 2013-2014 protests in Rio de Janeiro, who was subsequently vilified in the Brazilian press under the nickname “Sininho” (Tinker Bell). Quadros spoke powerfully about her own case and that of other political prisoners fighting for the freedom to demonstrate. She promised to appeal her case and continue to fight for justice. Quadros was followed by representatives of the Freedom for Rafael Braga Campaign. Arbitrarily arrested in 2013, Braga has become a symbol of the government’s repressive crackdown on dissent and disproportionate criminalization of poor people of color. The campaign representatives provided an update on Braga’s case and condition: since developing tuberculosis in prison, Braga has been under house arrest and will return to prison as soon as he heals.

The next speaker was Victória Grabois of the NGO Torture Never Again. Grabois situated the current struggles of Brazilian political prisoners within the context of the struggle for accountability for crimes committed by the dictatorship, the ongoing legacy of amnesty for torturers, and general impunity. Grabois stated that Brazil has never fully accounted for violations committed during the dictatorship—much less so than its Latin American neighbors. The recent investigation and National Truth Commission Report released during former President Dilma’s administration, Grabois claimed, was incomplete and the product of an insufficient reconciliation process.

To conclude the final panel, the audience heard from Fransérgio Goulart, an activist from the Grita Baixada Forum. Goulart grounded the discussion back in favelas in the Brazilian context, speaking about the current state of human rights and the impacts of the Israeli arms trade in his home region, the Baixada Fluminense—which, as he explained, has been called “the Africa of Brazil.” In the Baixada, six activists were recently killed by militias due to their links to human rights groups. Goulart was skeptical of the possibility of progress coming from the Brazilian government—even the most progressive administrations—reminding the audience that “bourgeois democracy will not solve our problems, we need to build alternatives… a progressive government is the one that militarized the favelas.” Finally, Goulart urged the audience to pay attention to nefarious foreign investments, funding atrocities from the favelas of Rio to Kashmir, and from South Africa to Palestine.