For the original article by Raquel Rolnik, Special Rapporteur to the UN on Adequate Housing, in Portuguese click here.

On Wednesday, August 16, 2012, residents of the community of Vila Autodromo, in Rio de Janeiro, delivered an urbanization/upgrading proposal to Mayor Eduardo Paes. The proposal demonstrates that there is no incompatibility between the construction of the future Rio Olympic Park, the community’s existence, and the environmental preservation of Barra de Tijuca, where the community is located. In preparation for the Olympic Games, the city of Rio has plans to remove the nearly 500 families that have lived in the area for more than 40 years, and resettle them in a housing project to be built with funds from the program My House, My Life. 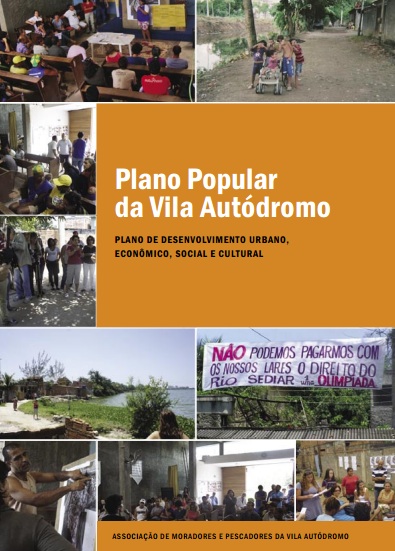 Known as “The People’s Plan for Vila Autodrómo,” the project was developed by the community’s Residents’ Association in partnership with professors and students from the Federal University of Rio de Janeiro (UFRJ) and the Federal Fluminense University (UFF). In the drafting of the plan, three workshops were held, as well as six general assemblies and many residents’ meetings.

Technically, the plan is divided into four programs: housing; sanitation, infrastructure, and environment; public services; and cultural and community development. The housing program, for example, calls for units of various sizes, some that can be enlarged, allowing for the particular needs of each family.

Environmental issues, often used as an argument for removing the community, were also included in the plan, which foresees, among other things, a 23,000 square meter area of environmental recovery around the Jacarepaguá Lagoon and the canal’s edge. With respect to public services, the plan proposes the community be included in the Family Health program, and provides for the construction of a daycare center and a public school. Also planned are new areas for sports and leisure.

To the residents, the plan shows that it’s technically and financially possible to leave the community where it is, without any damage to the staging of large sporting events. Financially, the plan is even more advantageous than the resettlement proposed by the city. The community’s plan has an estimated cost of R$13 million, while the city’s is expected to reach R$38 million.

So why insist on removal? What arguments can justify it? Unfortunately, Mayor Eduardo Paes has not agreed to the community’s proposal, and has not agreed to let the community stay where it is. But neither has he presented any justification for its removal. He has only said that he would entrust the plan to his competent deputies, but that nothing would be done during the 45 days leading up to the municipal elections, so as to avoid political use of the situation. What could be a possible “political use” of the situation?

The City of Rio has in its hands a project, which if adopted, could serve as a model for similar cases, not only in Brazil, but around the world. And it could show that in Brazil, large sporting events don’t necessarily have to answer only to market interests and their sponsors; rather they can be opportunities to confront our cities’ decades-old socio-environmental divisions. Without a doubt, this approach would be welcomed by residents and by all who fight for housing rights. So the question is: what would the mayor lose – in an election year – if he affirmed and recognized these rights?