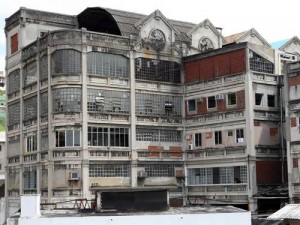 Since 2010, the former Bhering chocolate factory in Santo Cristo in the Port area of central Rio has became home to the city’s contemporary artists who have occupied and transformed the building into over 50 art studio spaces. Last month a court ordered all 72 occupants to vacate the premises within 30 days to allow new owners Syn-Brasil Enterprises to take over the building, located in an area that’s currently undergoing a huge regeneration project as part of Rio’s preparations for the 2016 Olympics. Fines were also imposed on artists, including a confectioner, upholsterer and furniture showroom among others. Unbeknownst to the occupiers or former owners (the Barreto family), Syn-Brasil had purchased the property at auction in May 2011 for R$3million from the Federal government to whom Bhering owes R$150,000 in unpaid taxes.

Following the eviction notice, the artists swiftly mobilized, mounting an online campaign to save the artistic occupation of the factory. Vivian Caccuri, a sound artist and one of the first to set up a studio at the former factory wrote: “What type of Porto Maravilha is to be built in Rio de Janeiro? What’s happened at Bhering is rare and desired in any other city. It’s impossible to recreate something like this as it wasn’t projected, it wasn’t part of an institutional plan but emerged from the force of people.”

Having established itself as an alternative and innovative art movement compared to similar artist occupations of previously neglected neighborhoods in New York and Berlin, plus partnerships with ArtRio International Art Fair and features praising the initiative in the cultural press, the Bhering case drew widespread support amongst the city’s artists and culture supporters. In an impassioned blog post Frederico Coelho declared that “the Bhering case will be definitive for the future of Rio de Janeiro.” 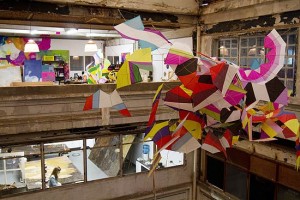 On July 30th mayor Eduardo Paes entered the debate tweeting “The eviction of the various art spaces in the old Bhering factory in the Port zone doesn’t make any sense, even the small amount [in unpaid taxes] that made the property go to auction. Let’s act to stop this absurdity. This is exactly the vocation that we want this region to fulfill.” The same day, the city government issued decrees for the expropriation and provisional taking into government trust of the old Bhering factory.

The city government’s decree halted the artist evictions with a view to maintaining the building’s cultural activity creating a public-private partnership that maintains city government ownership but with collective management. This same week the city government also revealed negotiations with US business tycoon Donald Trump over investments in the Porto Maravilha project to construct six 50-floor office towers with projected potential unit values of R$5billion, just meters away from the old Bhering factory.

The Bhering artists have identified their cause with other eviction threats in the port region, specifically historically important Morro da Providência where thirty percent of the community is marked for eviction. On July 28th, before the city government decree, Bhering artist Maira das Neves who has worked on a project in Providência wrote on her Atelie 1m2 blog: “As Morro da Providência woke up to more than 800 houses marked for demolition and lost its sports and events square, the old Bhering factory receives ever more artists from the city’s South Zone willing to invest in infrastructure and work in the region. They seem to be two opposing points in the gentrification equation. But in the face of real estate speculation, the community on the hill and the artists share the same precarious condition.”

Indeed, the Bhering artists are still living in a moment of uncertainty as legal wranglings between Syn-Brasil, the Barreto family and the government continue. However the city government’s choice to step in to ensure the survival of a two-year-old occupation of middle-upper class artists in a historically poor area undergoing major regeneration has drawn cynicism.

In a piece for culture and humanities magazine Pittacos, art critic Sérgio Bruno Martins wrote: “It’s known that art brings real estate speculation in tow. Let’s not be naive; in a sense, the Bhering occupation is a victim of its own success. The question is: does it necessarily have to be like this? Maybe not, but that depends not only on a sharper critical consciousness of art in relation to its ambivalent role in the urban dynamic, but also of a proactive attitude from the authorities in the sense of creating mechanisms that protect city spaces from predatory speculation instead of oiling it.”