In Rio de Janeiro, from August 23 to 27, 2018, Catalytic Communities* (CatComm) organized a series of workshops on Community Land Trusts (CLTs), together with a special delegation from the Caño Martín Peña CLT based in San Juan, Puerto Rico. The workshops were designed to discuss this urban planning tool and consider its potential applicability in Brazilian favelas. Over the five days of workshops, 130 individuals participated, including fifty community leaders and residents of Rio’s favelas. The workshops were organized in partnership with the Rio de Janeiro State Public Defender’s Office, the Pastoral de Favelas, the Rio de Janeiro Architecture and Urbanism Council (CAU), the Laboratory for Studies of Transformations in Brazilian Urban Law (LEDUB), the Lincoln Institute of Land Policy (LILP), and the Global Land Alliance.

The first event was the Community Workshop, which took place on August 23 at the Rio Public Defender’s Office Foundation School (FESUDEPERJ), specifically featuring residents and community leaders from favelas in Rio and community leaders from favelas in Puerto Rico. On August 24, at the same venue, the Legislative Workshop (reported on below) was held for technical advisors and members of civil society—lawyers, housing movements, non-governmental support organizations, architects, engineers, and urban planners—interested in discussing the legal possibilities for applying the CLT model in Brazil. On August 25 and 26, local community workshops were hosted in favelas in collaboration with residents—the first in Barrinha and the second in Vidigal. On August 27, a morning gathering was held to present the CLT model to Brazilian authorities, as well as representatives of public agencies and political parties. In the afternoon, the Puerto Rican delegation presented their final conclusions to the general public at the headquarters of the Rio de Janeiro Architecture and Urbanism Council (CAU).

On August 24, the second workshop on Community Land Trusts (CLTs) took place. In attendance were 43 technical allies—lawyers, representatives of housing movements and favela NGOs, architects, engineers, and urban planners—interested in discussing the legal possibilities of applying the CLT model in Rio de Janeiro and the potential for Brazilian legislation to support and encourage the creation of CLTs in the country.

Held at the Rio Public Defender’s Office Foundation School (FESUDEPERJ), this workshop aimed to present the case study of the Caño Martín Peña CLT in detail, with a focus on the law passed in Puerto Rico to establish the CLT. The exchange began with a review of the previous day’s presentations and initial impressions of the CLT from community leaders.

During the morning session, community leaders Edivalma “Di” Sousa from the community of Rádio Sonda, Marcello Cláudio Nunes Deodoro from Indiana, and Giovana Berti from Caetés initiated the workshop. They presented their initial impressions of the CLT model based on their experiences at the Community Workshop held the previous day. The three expressed their interest in the instrument as a potential means to fight eviction and gentrification, and to increase participation and community unity. They also expressed curiosity about how this tool could be applied to favelas in Rio. During the Community Workshop held the previous day, Deodoro had invited all those present to return to their respective communities and discuss the idea with friends and neighbors.

After the initial presentations by community leaders and welcoming of others in attendance, Theresa Williamson, executive director of Catalytic Communities (CatComm), presented a succinct history of the CLT model and its emergence during the 1960s Civil Rights Movement in the United States. Williamson explained why the CLT model should be considered for Rio de Janeiro’s favelas, mentioning the importance of the example set by the Caño in expanding the tool to favelas. 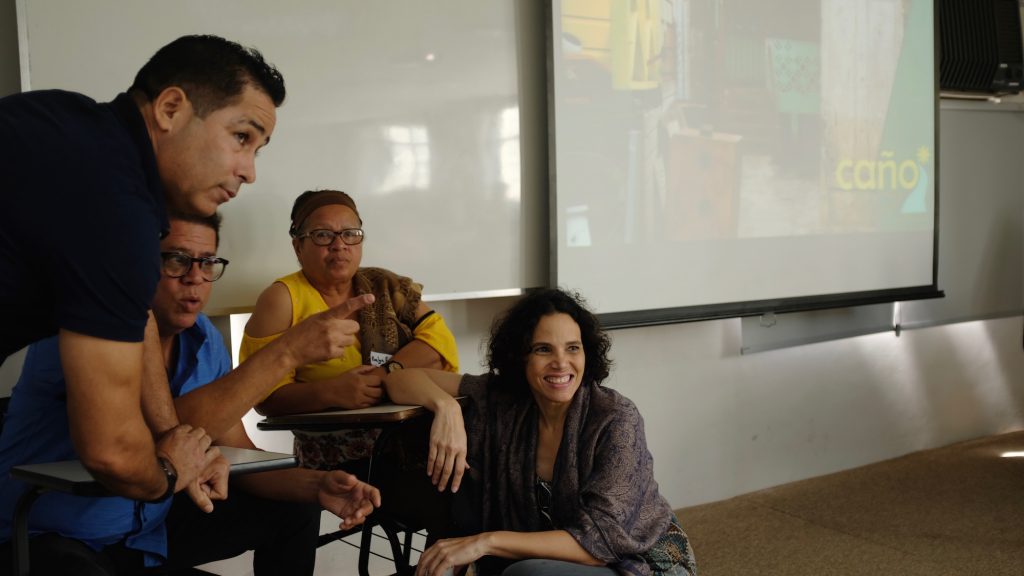 Later, participants heard from Mario Núñez, Evelyn Quiñones, Lyvia Rodríguez, and Alejandro Cotté, representing the institutions that are involved in the CLT in Puerto Rico—the Caño Martín Peña CLT; the Group of Eight Communities (G-8) where the CLT is located; and the ENLACE Project, a public agency charged with undertaking community planning and upgrading in the communities contemplated by the CLT. The four gave detailed presentations about the history of the Caño Martín Peña CLT and the role of city authorities and technical allies. Urban planner Lyvia Rodriguez and social worker Alejandro Cotté—both from the ENLACE Project—spoke of the long strategic planning process carried out by residents through hundreds of meetings. It was through this process that the communities determined that a CLT would be the best land tenure security instrument for them. However, worldwide, there were no existing, well-known cases of CLTs in informal settlements, so they had to create one from scratch. Since there was no legal precedent for creating a CLT in Puerto Rico, they realized they would need to pass a law, which not only established the CLT but also created the ENLACE Project—guaranteeing the implementation of the Caño Martín Peña strategic development plan.

In the case of the Caño Martín Peña—which encompasses eight settlements on the banks of the Martín Peña Canal in San Juan, Puerto Rico—settlements that had existed for over 80 years were threatened by infrastructure works to dredge the polluted canal. Having previously experienced evictions under the pretext that their homes were in an area of risk only to see luxury real estate developments take their place, residents were skeptical that the ultimate goal of public officials was actually to see them leave their land. They thus worked together with these technical allies to assess their options and ultimately decided to develop legislation that would allow for the creation of the Caño Martín Peña CLT. 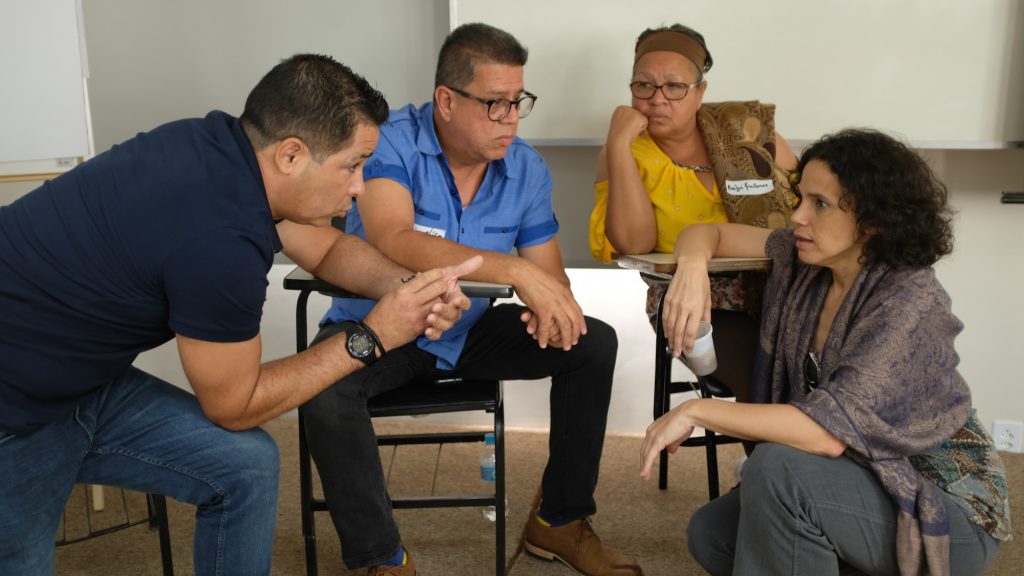 The CLT—whose governing board is voted in by residents and managed by a majority of residents along with an active group of technical allies—became the owner and permanent administrator of the land. The houses built on the land, however, belong to the families that live there—who own both the structures and surface rights. As such, they can buy, sell, mortgage, and inherit their houses. In removing land value from the equation, and with a rule requiring that the sale of the house is always offered first to the CLT at an affordable rate, affordable housing in the community is guaranteed in perpetuity. Moreover, as collective landowners, residents have great bargaining power and influence over public policies that affect them since they are not negotiating individually but collectively, with a large body of allied technical experts working on their behalf. Through the CLT, residents have managed to remain in their neighborhoods, where they are able to collectively organize and work on community development projects.

During the afternoon session, Rio de Janeiro lawyer and urban planner Tarcyla Fidalgo delivered a presentation on the potential to create a CLT in Brazil through existing land rights legislation, comparing Brazil’s options to those available in Puerto Rico. While the Puerto Rican communities had to press for the creation of a specific law that allowed for the creation of the CLT, existing Brazilian land law is quite comprehensive. Fidalgo explained that it is possible to move forward without the need for a new law. A CLT can even be created in a community that acquires the land through existing mechanisms, such as collective adverse possession. This is possible if, upon receiving their titles, residents decide to combine them and separate the land from surface rights, thus creating a CLT themselves. However, Fidalgo and the vast majority of those present recognized that a specific law to stimulate and recognize the CLT instrument in Brazil on a national (or at least municipal) level would be of great interest. 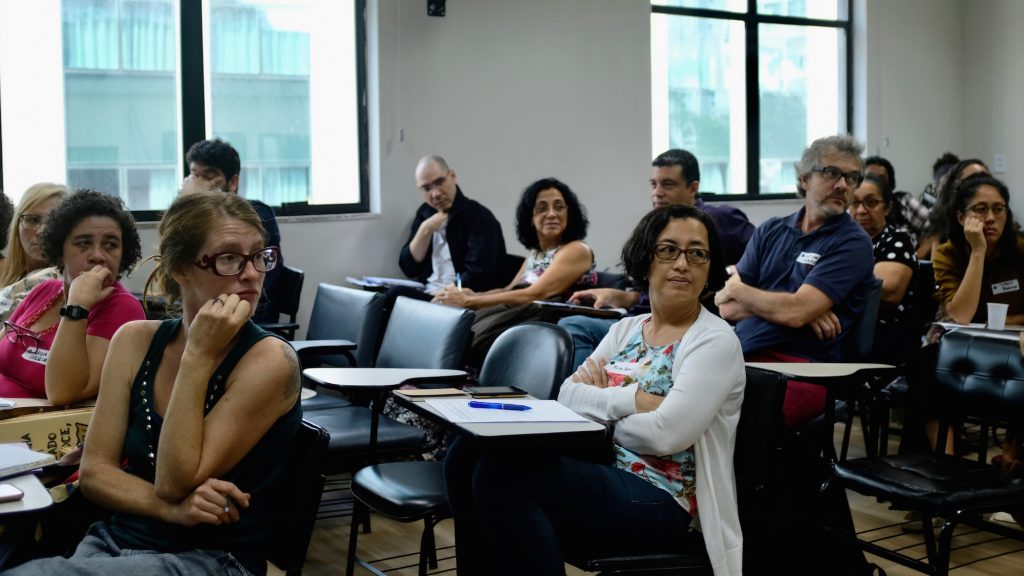 Debates were held about existing possibilities within Brazilian law to safeguard an eventual CLT from high taxes through exemption laws. The technical experts involved in the case of the Caño Martín Peña made it very clear that community control over actions is fundamental in creating and maintaining a CLT—a point of agreement among the experts in attendance. It was emphasized that the Puerto Rican communities spent several years learning and creating social projects in preparation for implementing the CLT. Any CLT project in Brazil would also need to follow this model of education and participation in formulating a collective plan for the community, whereby residents themselves arrive at the conclusion that the CLT is the best path towards achieving their goals. A representative of ITERJ observed that this form of project management would be new and revolutionary given that we are in a place where politicians and governments tend to impose projects upon communities through a top-down approach—a method widely known not only to be ineffective, but which often brings with it the additional and further complicating effect of dismantling communities’ positive characteristics in the process.

The technicians and specialists present discussed the idea of the CLT and continued to ask the Puerto Rican delegation about their specific case. They were asked about procedures for buying and selling homes within the CLT, the composition of the CLT’s executive board, and whether or not the CLT has the right to build low-income housing within its domain. Finally, the day ended with the formation of a working group that will meet regularly to develop the idea of establishing a CLT in Rio de Janeiro’s favelas. Nearly everyone present signed up to offer their help with a future CLT project.

For more information about the CLT model or to join the CLT Working Group, please contact us at ttc@comcat.org with the subject “GT do TTC – Interesse em participar.” Meetings are conducted in Portuguese.

For the full 3-part series on the Favela CLT Workshops click here.

*Catalytic Communities is the organization that publishes RioOnWatch