Initiative: The Association of Assertive Women with Social Commitment (AMAC)
Contact: Facebook | Twitter | Email
Year Founded: 2012
Community: São Bento, Duque de Caxias (Baixada Fluminense)
Mission: Empowering women, especially those who are victims of domestic violence, and educating others on how to join in the fight against gender disparities
Public Events: AMAC organizes food and clothing drives; an annual breast cancer awareness run and walk; and rountables, workshops and lectures on women’s issues. Events can be found on AMAC’s Facebook page.

In a country notorious for high indices of femicide and sexual assault, the Baixada Fluminense in Greater Rio leads the state of Rio de Janeiro in cases of violence against women. For years, Brazilian authorities have attempted to address gender-based violence—which is closely intertwined with race, class and location—through harsher criminal laws and protective policies, to little avail.

Undaunted in this seemingly dismal scenario, the Association of Assertive Women with Social Commitment (AMAC) continues to double-down in its fight on behalf of local women, especially those who have been the victims of domestic violence. AMAC is responsible for many activities and movements in Duque de Caxias, a neighboring municipality to Rio de Janeiro, that aim to empower women and educate communities about women’s rights and issues. With a variety of approaches and backgrounds, the women at the helm of this community-based NGO maintain a sense of optimism and progress in their community.

“I was a victim of domestic violence within my marriage. I was married for ten years, and I left in 2007. I broke the cycle of violence.” – Nill Santos, founder and coordinator of AMAC

Nilcimar “Nill” Maria Santos, 47, is motivated to promote AMAC’s mission by her own experience as a victim of long-term domestic violence at the hands of her husband. She explains that the violence began as physical, but transformed into psychological harm as well—which, she says, was even worse. 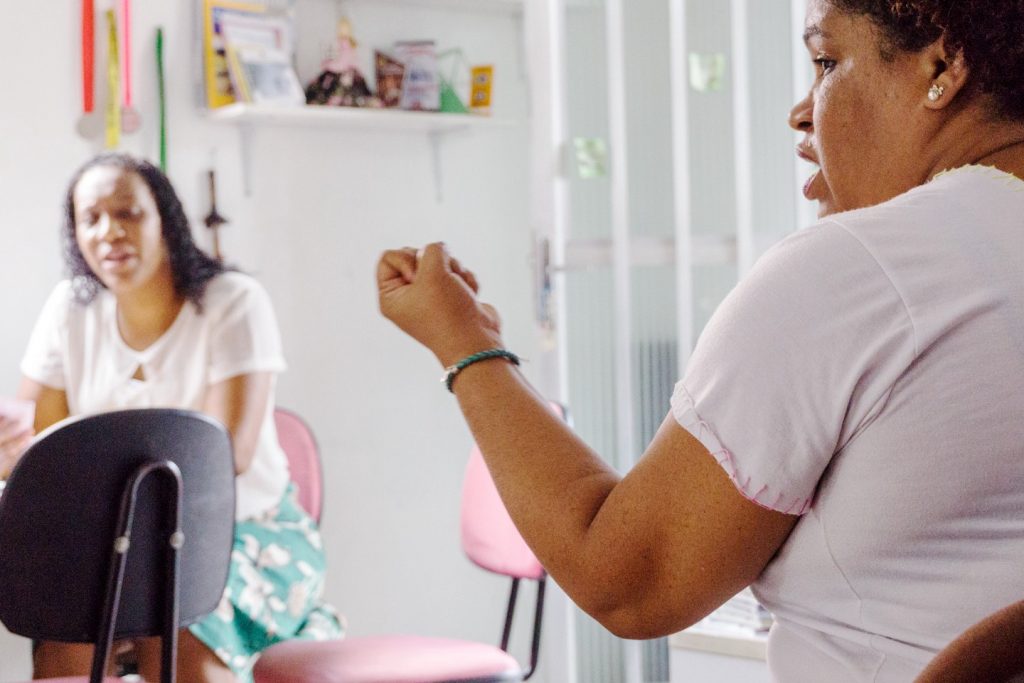 Over time, Santos explains, the discussion around what constitutes violence against women has become more nuanced and extensive: “Historically, we did not have nearly as much information [about this phenomenon] as there exists today. For example, when I separated from my husband in 2007, it was very rarely discussed; few people knew about the issue.” In addition, Santos says, we are now beginning to recognize as a society that sexual violence and intimidation can take place within marriage. However, there are segments of society that lag behind in understanding gender-motivated violence, including some men and older generations.

As is the case with many women who leave toxic relationships, Santos found herself depressed and without work shortly after she left her husband: “I had no way to sustain myself, I was unemployed.” Navigating this period of emotional and economic instability is especially important to address the vicious vortex of abuse that many women find themselves in.

Thus, the financial empowerment of women through entrepreneurship and employment opportunities is one of the key initiatives undertaken by AMAC: “The biggest difficulty [for the women we work with] is finances. With resources, they are able to make their own living, sell their products…” explain AMAC volunteers Simone Souza Martins, Claudia Helena Machado da Matta, and Cristiana Antunes.

Santos decided to found AMAC after her experiences in starting a soccer club in her community, which evolved over the course of the year in 2011 as she began to incorporate roundtables and forums in which she shared her story with others. She says, “The project lasted a year… [At the roundtables] when I told my story, other women shared their own stories with us and realized that their own experiences were of domestic violence.” Santos kept in contact with some of the women involved in these initial meetings and built what would eventually become the NGO known as AMAC.

Although the organization is less than a decade old, it has already garnered a host of local accolades and widespread attention across the region for its multifaceted approach to reducing violence and empowering women to be independent and safe. To varying degrees, the organization helps women access courses, discussions, legal advice, medical checkups, and gynecological exams. “We conduct one roundtable each month in each municipality or neighborhood in which we operate. We already have five planned [next month],” the women say. The events put on by the organization are attended by a diverse group of community members, with topics ranging from the psychological effects of violence to its impact on children. 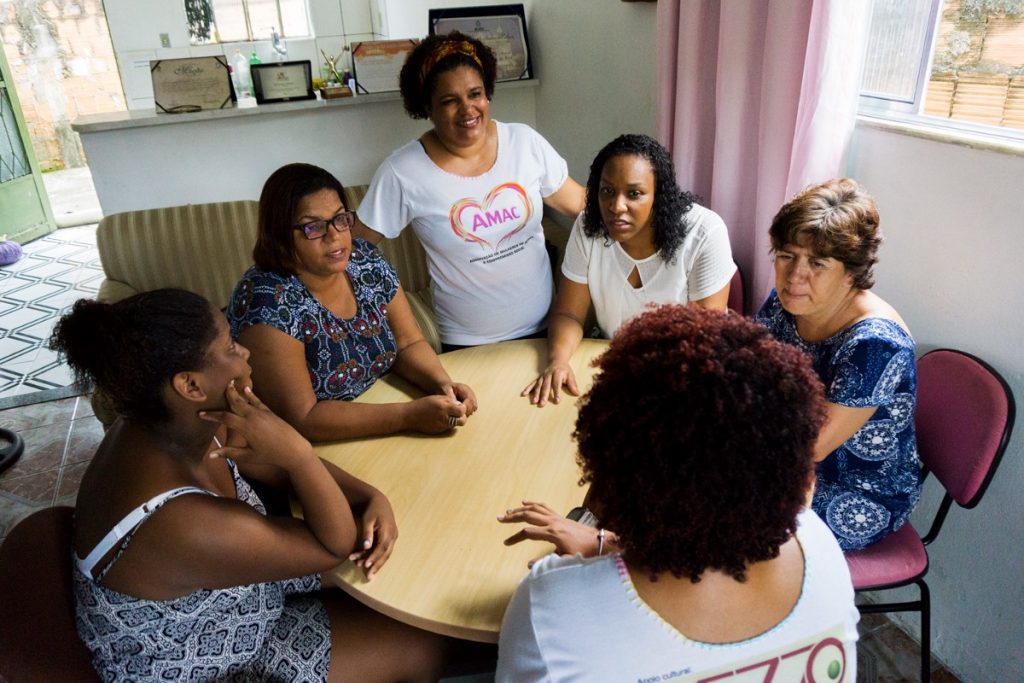 “We began in 2012. In 2014, we became a legal entity as an NGO, and in 2015 we won our first prize—the Prêmio Acolher, a prize awarded to social impact project leaders. In 2014, we conducted our first breast cancer awareness run and walk, sending 740 women into the streets. [Before that], in 2013, we created a tribute to Carolina Maria de Jesus.”

In large part, the success of AMAC stems from the power or Santos’s leadership and background. Santos says, “My pain is a remedy for [other women in the same situation], because with my telling of what I lived through… When I talk about my story, [I can help other women] escape that situation…” Over time, AMAC has invested in its messaging: selling T-shirts and hats, tasking Santos’ son with the NGO’s graphic design, and maintaining a robust social media presence. However, one of the most powerful tools allowing AMAC to expand its scope and message is word-of-mouth information-sharing by women who participate in the organization’s activities and events.

Nowadays, the organization is increasingly focusing on how it can financially empower women through entrepreneurship and employment. Volunteers like Antunes and Machado host different types of workshops based on their own availability—crochet, recycling, costume-making, painting, and more. AMAC is concerned about sustainability on multiple levels. The artistic endeavors of its members often involve using materials that would normally be thrown away or recycled. “For me, it’s a pleasure… I look for projects that are easy, things that can be reutilized… for example, making an egg carton into a flower,” Machado says, noting also that she has seen a greater enthusiasm for recycling among the women with whom she works. Antunes chimes in as well, discussing how many of the participants transform “trash” into art and share their creations with other women, who are excited to buy the affordable crafts and jewelry that result.

On a larger scale, AMAC hopes to grow in a manner that is financially sustainable. Currently, the NGO is funded largely by public support and donations. Recently, AMAC received R$40,000 (US$10,000) as a beneficiary of the “No One Left Behind” campaign—a fundraiser for organizations that support victims of violence and vulnerable populations in the wake of the 2018 Brazilian general election. In the future, the organization hopes to expand regionally and nationally, build safe spaces for women, and expand their volunteer network.

While AMAC faces no shortage of challenges, the women leading its mission and vision remain hopeful and motivated. Even when facing those who are hostile to the feminist ideals of the organization, Santos manages to convey her message. She put this talent to work when she spoke earlier this year at a conference of Christian leaders about domestic violence and women’s rights: “I said: ‘Good morning, my name is Nill Santos, I am a Christian, and I am a feminist. I am going to introduce you all to the greatest feminist in history: Jesus Christ. He was a man who greatly respected women. Nowadays, our feminists are attacked… women are being raped in our churches.'”

Under Santos’s direction, AMAC focuses on making issues of feminism and women’s rights accessible to people from all educational, ideological, and economic backgrounds. “Many people today do not understand feminism, so it is necessary to explain to them that we are in a moment of regression, that we do not want to be ‘better’ than men,” Santos says. She emphasizes the importance of discussing feminism with women from the favela in a way that makes these issues relevant to their lives.

As the women of AMAC have seen time and time again, knowledge is power. Whether it be providing victims of domestic violence the tools to begin their own businesses or sharing information about feminism in neighborhood meetings, AMAC is spreading its message and philosophy. Empowering communities to invest in and protect their women is no easy feat, but organizations like AMAC show that it is possible to make lasting progress and build supportive coalitions from the ground up.

*The Association of Assertive Women with Social Commitment is one of over 100 community projects mapped by Catalytic Communities (CatComm), the organization that publishes RioOnWatch, as part of our parallel ‘Sustainable Favela Network‘ program launched in 2017 to recognize, support, strengthen, and expand on the sustainable qualities and community movements inherent to Rio de Janeiro’s favela communities. Check out all the profiles of mapped projects here.