This article is part of Agência Narra’s journalism training program, a project of Observatório de Favelas in partnership with data_labe.

Resistance is the watchword. The new generation of children in Rio’s favelas shows that racism is losing ground to the recognition of blackness and the development of self-esteem in early childhood.

“This one here is for the black girls. I’m black—can you see that I’m black?” These are the affirmative and empowering words of Luiza Alves, who at the age of five launched her career as a YouTuber. In a tutorial, the young girl presents personalized foundation to match her skin tone—along with tips on lipsticks, earrings, and wigs—with effusive ease and charisma.

From the streets of Caixa D’Agua—a favela in Mesquita, in the Baixada Fluminense—Luiza confidently confronts taboos that adults avoid. Offended by a neighbor, the young girl reacted. “I ran after him to tell him off, shouting to my mom that he’s a racist. He had called me ‘pão de careca‘”—a pejorative term to describe a woman’s short afro hair.

Unlike the person who insulted her, the little girl admires these features and proves this in describing her mother: “Look, she’s so beautiful: beautiful hair, beautiful skin, and a beautiful face.” All of this beauty belongs to 22-year-old Fernanda Alves, who works to empower black women through her brand of wigs, Queen Laces. However, as a student at the Federal University of Rio de Janeiro (UFRJ), she didn’t always see in herself the virtues described by her daughter. 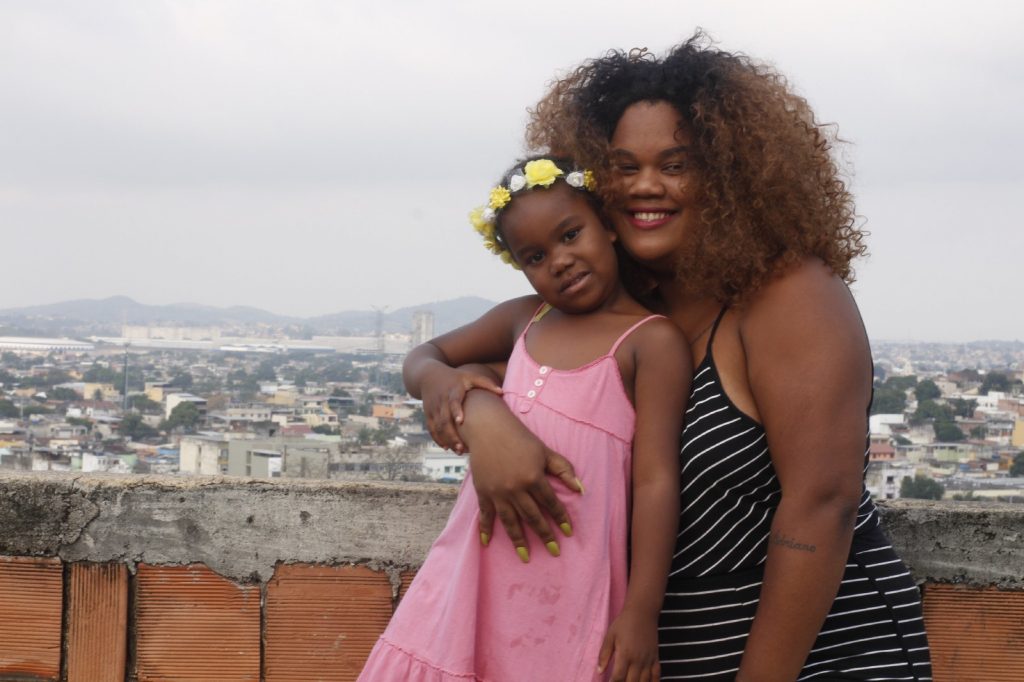 “As an eight-year-old, I would go home crying—I didn’t want to go back to school. My grandmother raised me and was the primary person I had to look up to. She was racist on a bizarre level. She doesn’t approve of afro hair, nor the fact that I had a daughter with a black man with dark skin and African roots. She rubs this in my face all the time,” she vents.

To educate Luiza, Fernanda Alves takes a different approach. She seeks to be a role model for her daughter and introduces her to audiovisual content with black protagonists. Asked about the cartoon on her shirt, Luiza emphatically states: “This is Princess Moana, isn’t that obvious? You don’t know who that is? Tiana, Moana, Pocahontas…” Her mother interrupts and points out that Pocahontas is not black. “Hey! Pocahontas isn’t black, she’s indigenous,” she corrects her daughter.

It’s among this new generation that being black and proud is on the rise. Their young age is no longer a barrier to bringing up the subject at home. Thais Ferreira, a resident of Irajá in Rio’s North Zone and the mother of João, Athos, and Zion—two, four, and six years old, respectively—explains how racism works in Brazil. “The elite sustain themselves through the racial and social oppression of black favela residents. If this racist logic continues, in less than fifteen years, my children will be victims of a genocide that is already underway. They will be the target of many deaths, whether social or lethal,” she states. The 2017 Atlas of Violence shows that for every 100 deaths in Brazil, 70 of the individuals are black. The research was conducted by the Brazilian Forum on Public Safety in partnership with the Institute of Applied Economic Research (IPEA).

Ferreira ran for state representative for the first time in 2018 and gained more than 24,000 votes. Her campaign platform prioritized strengthening racial identity so that the new generation can assert themselves as heirs of African ancestral culture. “Yesterday, the dream was to be a white pop star, today, it’s to be King or Queen of Wakanda. This is freedom!” says the social entrepreneur, in reference to the success of the first superhero film featuring black protagonists.

Lesson of the Day: Blackness

To the sound of jongo drums, nine-year-old Cauê Santos connects with his ancestors. The discovery of this Afro-Brazilian cultural expression was a gateway to reflecting on his identity as a black child. “We talk about how he identifies himself, white privilege, and why it’s necessary for him to study,” explains his mother, 36-year-old Leticia Santos.

The fourth-grader carries these teachings from jongo to the classroom. During a discussion about race, Cauê owned his blackness—but his attitude was challenged by his classmates. “Some said that I’m white, but I said, ‘I’m not white—I’m not,” says Cauê, whose mother is black and father is white. Santos made the most of the incident to introduce another aspect of racism, colorism, explaining that “those who are the darkest skin tones suffer the most.”

“My mother always told me: ‘You’re a black, large woman from the favela and you need to stand out—otherwise you’ll struggle throughout your life.’ I pass this on to my son because sadly this is the reality that we experience,” recounts Santos, who is an educator.

Fifteen-year-old Tammylis de Souza had a similar experience. Throughout her childhood, she saw school as a hostile environment. “I’d look at myself in the mirror and I’d see that I was different because I was darker and I had afro hair, while all the other girls were white with straight hair. I was ashamed and avoided the topic. For this reason, I relaxed my hair. When they asked about my skin color, I would deny it and say ‘I’m white, right?’ recounts Tammylis, who lives in the Carobinha favela in Campo Grande, in the West Zone of Rio.

In 2016, an extracurricular activity helped Tammylis to discover her black identity. Ever since then, she has hosted discussions on the issue with her classmates at the Ministro Alcides Carneiro Municipal School, where she is in the 9th grade. “When children’s identities are respected, racial consciousness stops being a problem and becomes a source of pride,” she says.

Tammylis emphasizes that self-acceptance contributes to the ability to occupy spaces usually frequented by middle-class white people. “In my neighborhood, I don’t know anyone who goes to college—but I want to be a doctor, to help people and to be a role model like my teachers are for me,” she envisions.

Who Is Black in the History Books?

The neighborhood where Tammylis lives is not the only one that lacks black representation in positions of influence. Furthermore, the lack of representation is evident in instructional materials. Flávia Pinto, a sociologist and Umbanda priestess, observes that the mention of black people is restricted to discussions about slavery without considering their contributions to fields of knowledge like science, art, and politics.

These factors motivated Pinto and other activists to draft Federal Law 10.639/2003, which made it compulsory to study Afro-Brazilian history and culture in elementary, middle, and high schools. Though the law has been in effect for fifteen years, there are still several obstacles to implementation, such as the lack of teacher preparation in these areas and prejudice.

A 2015 study by the Ministry of Education confirmed that only 7.6% of the 105 schools in the sample report using teaching materials related to Afro-Brazilian culture, while 92.4% did not report whether or not they use the content. Yet more, Pinto highlights the difficulties of incorporating the materials into the curriculum. According to Pinto, who is a sociologist, discussions on race are usually encouraged by teachers who are more sensitive to the issue and therefore argue in favor of creating specific classes on Afro-Brazilian culture. “I explain to my children that we belong to an ancient tradition, the Yoruba tradition and the tradition of orixás. This is something very powerful that propels them into the world,” she emphasizes.

The book Cora’s Hair by Ana Zarco Camara tells the story of a young girl with afro hair who overcomes her classmates’ criticisms and begins to like her physical traits. The book became a favorite among students at the Estrelinha School in Complexo do Alemão, where journalist Carolina Marinho teaches Afro-Brazilian literature to students aged seven to ten. The curriculum includes literature by Carolina Maria de Jesus and Conceição Evaristo, as well as Brazilian folklore. According to Marinho, the problem of racism is portrayed in a fun and playful way.

This Isn’t Bullying, This Is Racism

When asked what constitutes racism, Cauê explains that “it’s like when someone calls another person a monkey.” Cauê has a step-by-step approach to dealing with offensive situations: “Breathe. Don’t cry in front of the other person. Talk to the person.” This is what he tried to do when he was called a “whale” by another child. “I said, ‘Where are we? In the sea or on land? Then I asked, ‘So what are you? A shark?’ Then I said, ‘I could eat you too.’”

Vanessa Menezes de Andrade, a specialist in social relationships and human rights, affirms that cultural racism affects all individuals but in different ways. “White children are conditioned to be racist due to the information they receive on a daily basis, such as through games, TV shows, and differential treatment from teachers. Black children, on the other hand, learn to devalue their own identities and see whiteness as the ideal,” she assesses.

Contrary to popular belief, racism is not a type of bullying. Andrade, who has a Ph.D. in social psychology from the Fluminense Federal University (UFF), highlights that racism is not specific to schoolchildren. “Bullying is a form of institutionalized violence in the school environment that aims to frighten the victim. Racism, on the other hand, is a historical process. It has to do with the way our country is structured—it’s present everywhere, not exclusively in schools. Hence the importance of a permanently anti-racist educational system and of dealing with acts of racism as political rather than individual actions,” she argues.

This is the legacy that Fernanda Alves hopes to provide for Luiza, an education without taboos. “We have to speak about homosexuality, about drugs, about everything—and to stop thinking that mollycoddling and instilling prejudice are good ways to raise children. In reality, in doing so, you’re creating men who are sexist and women who lack a sense of their potential.