On Saturday, May 11, Voz das Comunidades, a community-based newspaper and charitable organization from the favelas of Complexo do Alemão in Rio de Janeiro’s North Zone, launched the short documentary Voz Ecoa: Environment and Sustainability in the Favela. Produced by Voz das Comunidades and the Junior Enterprise at Rio’s Pontifical Catholic University (PUC-Rio), an interdisciplinary consulting company run by students, the documentary aims to highlight sustainability projects in Rio de Janeiro’s favelas and increase collective environmental awareness within these communities.

In an interview with Voz das Comunidades, Gabi Coelho, a lead collaborator on the project, said that the film’s producers wanted to “show everyone the importance of working on an environmental agenda and changing our lives in favor of the environment… Just like we focus on public security in favelas for obvious reasons, like violence, we also have to focus on environmentalism.” Coelho cited community gardens, green spaces, and more efficiently constructed homes as potential benefits of environmentalism for favela residents.

The launch event took place at Casa Voz, which functions as both a community newsroom and co-working space in Complexo do Alemão’s Morro do Adeus favela. Coelho and the Empresa Júnior staff briefly introduced the project and then played the eleven-minute documentary in its entirety to the crowd of favela residents, journalists, students, and community organizers in attendance.

The favela residents featured in Voz Ecoa speak at length about the negative impact of garbage and inadequate sanitation in their communities. However, the film also serves as a tool to boost local sustainability projects like Eco Maré, led by Juliana Oliveira, a resident of Complexo da Maré in Rio’s North Zone. By sorting and selling discarded recyclable materials, Eco Maré reduces the amount of waste that accumulates in the streets of the favela. 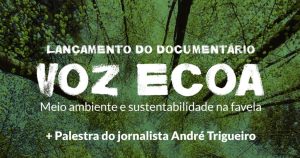 According to Voz das Comunidades, Eco Maré “represents how favela projects are powerful and can improve the reality of the communities in which they are located.” In Voz Ecoa, Oliveira shares her experience as a community organizer and discusses the detrimental impacts of trash in Maré, including poor sanitation and lack of community pride in public spaces. Eco Maré works to tackle these problems, Oliveira explains. “We understand that education holds the power of transformation and so we organize discussions and conversations covering a range of environmental themes for the general public, including children and youth.”

Interspersed with Oliveira’s story, Voz Ecoa features clips of a biologist from PUC who argues that collective action is important for environmentalism because “no organism, no living being is individual.” The filmmakers also incorporated metaphorical narrative flourishes like clips of actors ripping plastic wrap off of their bodies to represent the community breaking free from suffocation by plastic and trash. Voz Ecoa concludes with a call to action, compelling viewers to consider the question, “If we don’t do anything now, what will become of the environment?” and emphasizes that because all humans inhabit the same planet regardless of which region they live, the “environment of the favela is also your environment” and thus deserves equal protection and consideration.

Following the screening, André Trigueiro, a journalist and postdoctoral scholar in environmental management at PUC, led a conversation on the environment and sustainability in favelas. Trigueiro emphasized the ties between sustainability and other issues like public health, security, cost of living, and sanitation. “You can’t talk about sustainability without also talking about quality of life,” he told the audience.

Recalling an encounter with a community leader in Rocinha, located in Rio’s South Zone, who lined his roof with reflective milk cartons to cool his home, Trigueiro praised simple, locally-sourced sustainability projects. Using collected rainwater to “clean windows, water their gardens, and clean Ubers and taxis,” said Trigueiro, is another easy way to conserve resources. “The environment starts with people,” said Trigueiro, and favela residents should know that they deserve clean streets, higher quality of life, and green spaces.

Trigueiro suggested that environmental education could prove key to improving trash collection and environmental action in favelas and posited that children may be able to teach their parents “not to throw trash onto the street.” He also encouraged residents to approach littering neighbors and chide them for their irresponsible environmental behavior.

However, some favela residents in attendance disagreed with this method and worried that parents would not be receptive to their children reprimanding them, or that residents would be risking their personal security by approaching unknown people on the street to tell them to pick up their waste. Trigueiro and the participants ultimately concluded that changes to environmental consciousness in favelas must be systemic in nature and that other social and political issues in favelas like Complexo do Alemão, such as public security, must also be treated as environmental problems.

Voz Ecoa will ultimately be shown to schoolchildren and used as an educational tool by community advocacy organizations in favelas across the city. The documentary will be screened at the Museum of Tomorrow and in other favelas in Rio, Belo Horizonte, and São Paulo.