This article is part of the ongoing series Challenges of Living in Magé.

Ana Silva, 35, was 30 weeks pregnant when she found out that she was expecting twins with a disability. Her daughters Annah Beatriz and Luísa were diagnosed with skeletal dysplasia, a rare condition that can alter bone growth. The diagnosis was made at a doctor’s appointment in Rio’s South Zone. On the long journey back home to Magé, a municipality of Greater Rio’s Baixada Fluminense region, Silva decided to research skeletal dysplasia online since her doctor had not made it clear. It was then that she realized that her twins would have a type of dwarfism. Upon learning about their condition, Silva—a single mother with a five-year-old son, João Miguel—was most fearful when she realized that among the various types of skeletal dysplasia, it can be fatal in some cases. A genetic test confirmed that the twins had achondroplasia, the most common type of skeletal dysplasia. This meant that the twins would have short stature and altered bone formation.

Even in their first year of life, the twins faced many of the common challenges that affect disabled children in the Baixada: the challenge of getting access to specific treatments that they need in order to live a healthy life. Annah Beatriz and Luísa are now three years old and as residents of Magé, have already come across a great deal of bureaucracy and neglect in pursuit of medical care. Physical therapy is paramount for individuals with skeletal dysplasia, but the twins don’t have regular access to these specialty services since they are not offered by the local government. Orthopedic care can only be accessed through the Children’s Hospital in Vila Valqueira, even further away, in Rio’s West Zone. For neurological care, they have to go to the Fernandes Figueira Institute in the South Zone, where the initial diagnosis was made during Silva’s pregnancy. When the twins needed an MRI scan, they had to go to a hospital in yet another municipality—Nova Iguaçu—and wait in line for two hours.

The family faces transportation difficulties to access medical care within their own neighborhood, too. Magé, like other cities in the Baixada, has precarious urban infrastructure, which means that proper pavement, crosswalks, and traffic signs are few and far between. “I don’t have a support network here and my transportation difficulties are not just due to having daughters with disabilities but also simply because it’s difficult to find safe walking routes around here,” Silva said.

Another of Silva’s daily concerns is her daughters’ education. The girls go to a municipal preschool, but the facilities couldn’t provide specially adapted furniture. This cost had to come out of Silva’s pocket. Another fear relates to her daughters not having access to services such as banks and shops in the future because of society’s attitudes towards people with dwarfism. Holding back tears, she says that people need to understand that dwarfism isn’t just about having short limbs. “Dwarfism means not having a high quality of life. It means being dependent on other people. I always tell the other parents when we have meetings at the preschool that all children are equal, including children with disabilities. I tell them that in some places—not here in Magé, but in Rio and São Paulo—some banks have begun to be equipped with ATMs that are specially adapted for use by short people and people in wheelchairs. I mean, people need to start thinking more about this,” she says.

Silva is part of several support networks for people with disabilities. She realized that she needed to make more of these connections. For example, she’s part of a Facebook group in which 2,000 members share their experiences with achondroplasia. The group is called “Achondroplasia Without Discrimination,” but it also welcomes people with other disabilities. Silva is also in constant contact with Kênia Maria de Souza Rio, who has the same condition as her daughters. Souza Rio is a lawyer and is currently president of the Rio de Janeiro Dwarfism Association (ANAERJ). 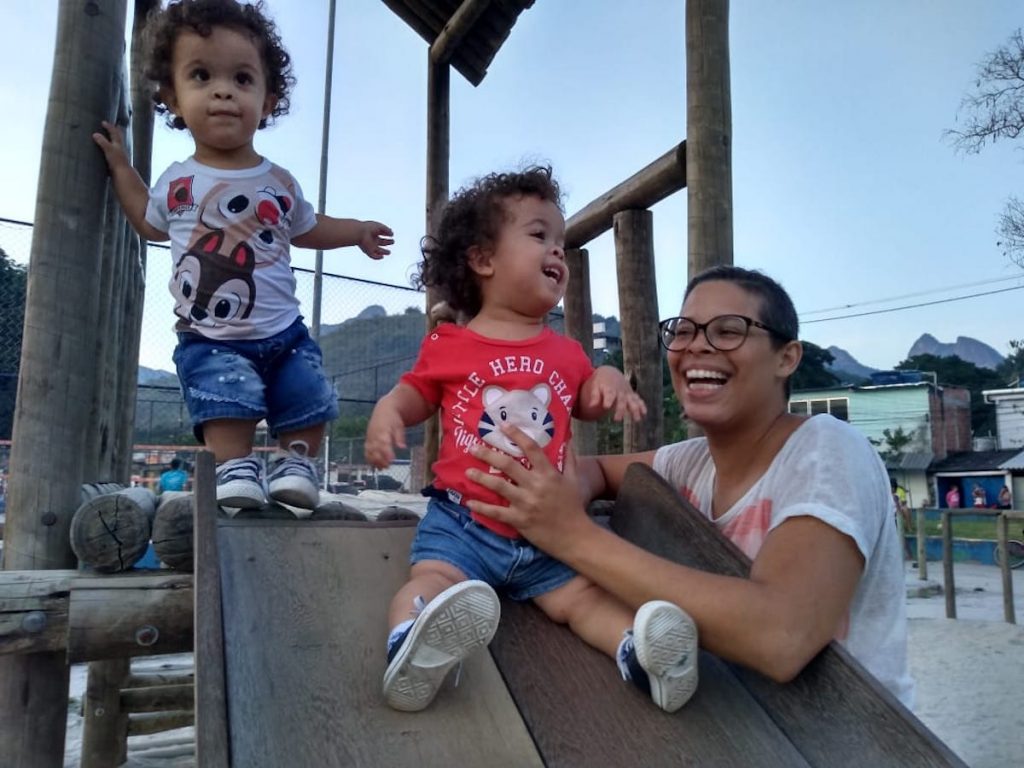 Thanks to Souza Rio, Silva was able to participate in the association’s first conference for people with dwarfism, which took place in Rio de Janeiro in 2016. It was there, Silva believes, that she was able to get a better sense of which paths to follow in pursuing care for her daughters, especially in the legal field. For example, she experienced prejudice from the Public Defender’s Office when requesting financial support for food: the Public Defender’s Office didn’t accept the twins’ medical reports, meaning that she was offered less financial support than she is legally entitled to.

Silva’s contact with other people with disabilities also allows her to keep up to date with legal proceedings related to the 2015 Brazilian Inclusion of People with Disabilities Act. This law brought about significant changes to the lives of the 45 million Brazilians living with disabilities, especially with regard to access to education. For Silva, having access to networks for people with disabilities is important because it allows her to share her questions, as well as her frustrations. Silva is not alone in the difficult struggle for disability rights. “Often, my daughters only receive medical care when I complain via social networks. I’ve never managed to get the Magé Secretary of Health to provide care without having to shout about it and demand my rights.” While the Brazilian Supreme Court ruled in May 2019 that medication for rare diseases should be funded by the Brazilian government, specific treatments for achondroplasia still don’t exist.

In Silva’s opinion, it is undeniable that there is a long way to go before people with disabilities enjoy all the rights they are entitled to. People living in the peripheries—in cities like Magé with poor access to health, education, and infrastructure—have to have money in order to guarantee their basic rights. “I’ve been going to therapy for the past five months because I want and need to be useful to my children—in order for them to be okay and in order to create a future for them in which I can have some of my own life, too,” she insists.

When asked what the future looks like for her daughters, Silva concludes that current challenges are so serious and urgent that she is only really focusing on guaranteeing basic levels of dignity for her children right now. But, as a woman, activist, and social work student, she says that her aim is to offer the same support that she received from social workers along the way to other women, especially poor women who have children with disabilities. “My desire to study social work was born out of the assistance that I myself received from social workers in all of the places where I take my daughters. They are the people who give me the guidance that I need. I would really like to help other mothers of children with disabilities in the future—mothers like me who don’t have a support network.”

This article is part of the ongoing series Challenges of Living in Magé.

Thábara Garcia is a resident of Magé, a teacher, and a member of the Roda de Mulheres da Baixada collective.