For the original article in Portuguese by Angelina Nunes published by Agência Pública click here for the series and here for the article. Photographs by Ana Lúcia Araújo. This is the third article in a four-part series produced through Agência Pública’s journalism grants contest focusing on hunger in Brazil in partnership with Oxfam Brasil.

“We have to get out of this condition of poverty,” says a resident who learned how to make a nutritional mix to fight hunger.

Jorgina Ferreira Vieira’s left eye is opaque gray in color. She says she lost “her eyesight from a tree branch” and then added, rather awkwardly, that “in fact,” the father of her eleven children gave her a beating in the house and she was hit very hard on the same side of her face as the injured eye. He then disappeared.

With blindness came never-ending headaches. Even so, she gets up every day to look for a way to earn a living for her family. At the age of 46, Viera has one grandchild and lives in a house in the middle of the forest of the Pedra Branca State Park, in the area of Quilombo Cafundá Astrogilda in Vargem Grande, a neighborhood in Rio’s West Zone.

The word “hunger” is never uttered. She repeats that she “had a difficult period” and had a “hard life with many difficulties.” She uses the past tense to erase the times when, in the absence of milk, she would put a little water with sugar in the baby’s bottle or, on better days, water from boiled manioc—this was meant for the older children. She has lost count of how many times she skipped meals to feed her children: “And if I have to today, I will.”

The difficult days were a repetition of her childhood with twelve brothers and an alcoholic father who would go out and leave her mother to feed the children. Without money, they would collect green papaya in the garden to make stew, and bananas to fry or cook. The vegetables that they planted replaced the meat, a luxury that their dishes never included.

During that time, family farming helped many quilombo residents overcome hunger. Located 95 kilometers away from Japeri, in the Baixada Fluminense, the 12,500-hectare park is an environmental conservation unit considered to be one of the largest urban forests in the world, located by well-known neighborhoods like Jacarepaguá, Bangu, and Barra da Tijuca.

The only way to arrive at Viera’s house is to climb 45 minutes up a steep dirt road full of holes and rocks where cars cannot pass. The coming and going of local residents is sometimes interrupted by horses. It is a local custom to walk around with a machete. With a laugh, a gentleman explains that it serves to frighten the little animals that can appear.

Viera lives on the top of a hill where you can hear the sounds of cock-crowing, birds, and a waterfall. It is there, after walking over stones, that one arrives at what she calls “my shack.” Out of the four rooms, two are made of bricks and the others of plywood. All are painted light green.

Through the solidarity network in which Viera lives, Pastor Paulinho helped to build her house, a Catholic church would donate a basic food basket, and from others, she would receive clothes. “I have much to be thankful for. Many helped me, cumadi.” And she apologizes, laughing, for the sudden intimacy: “Sorry, I call everyone cumadi,” a slang version of the endearing term comadre, for a female friend.

She recalls that before she had the wooden house, she lived in a house made of cloth for at least six months. It was an improvised house that consisted of wood covered with pieces of fabric. When it rained, the leaks made it impossible for the family to sleep.

Today, her children are either working or studying—except one who stopped attending school, which is why she lost her Bolsa Família welfare benefits. Under the program’s rules, if a child is out of school, the family is excluded from receiving benefits. To re-enroll, she would need to register her younger children again.

At the moment, Viera is working as a housekeeper—or in any other job that comes up—to make money. Her former boss, she says, is also unemployed. She travels the distance that separates her house from the streets of Vargem Grande by foot, carrying her shopping bags and even gas cylinders. Viera finishes her sentences with a smile, saying that today, her life is better than it was during her childhood and defining herself as “a fighter.” 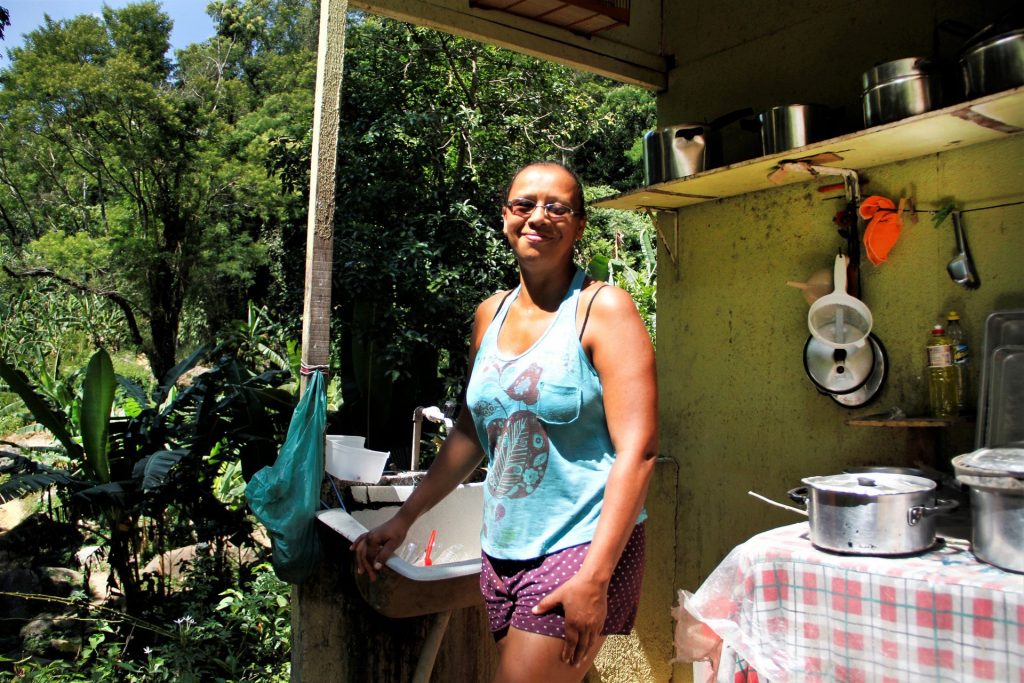 In the yard, a small space is filled with cabbage, a banana tree, and a guava tree. She complains about the lack of land to keep a garden. She remembers that during her childhood, her parents and grandparents lived partly off the land. As did their neighbors—relatives and descendants of the first quilombolas. Caring for the land was part of daily life for those who lived far from the “asphalt,” or formal city. In the middle of the forest, much of the food came from what was planted. Manioc, which fed the younger children, is no longer grown. Today, time is divided between going up and down the road to look for a temporary job in a nearby neighborhood—”any gig” that enables her to put food on the table.

In the past, a vegetable garden also supported the family of Mônica Oliveira da Silva, 43. Alongside her seven siblings, she spent her childhood cooking bananas, manioc, and vegetables that were planted in the garden in the yard. Her mother, who was illiterate, stayed home with her eight children and her father did not always show up because he “drank too much.”

When she became pregnant at the age of 21, she left home and went to earn a living. She remembers that she would go hungry in order to give something to her children to eat: “[These were] hard times: lacking food at home, wanting to eat and not being able to.” Today, she has five children, each from a different father, two of whom have already passed away. One father helps with basic food baskets; the other wanted a DNA test and, as a result, is paying an allowance to his daughter. The fifth does not get in touch. 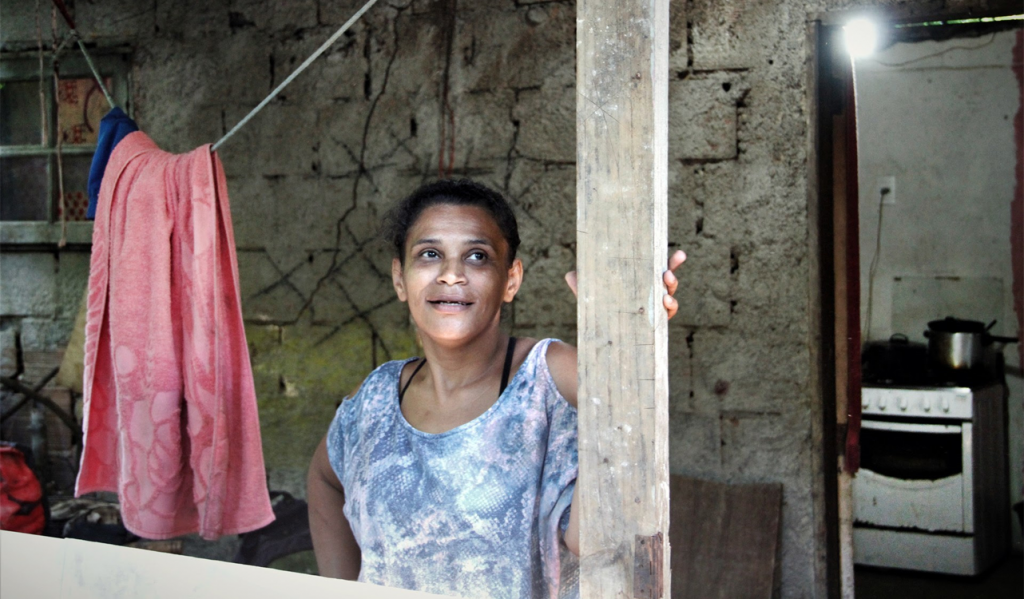 The planted fields of her childhood are no longer. She says that the animals eat everything and “people uproot whatever is planted.” She, therefore, takes her children with her to her housekeeping job to avoid leaving them home alone. There, they eat. She says with pride that her children do not beg on the street.

Her house is still under construction. Before, it was just a room and a bathroom; today there are four rooms and a balcony. One of the children sleeps in the kitchen, where there is a gas stove. Because of the difficulty in delivering the gas cylinder, she built a wood-fired oven on the porch. In order to be able to eat, she also makes use of the basic food baskets donated by the Catholic Church, where she attends catechism. Meals usually contain rice, beans, egg, and sometimes meat. She dreams of a better future for her children since her father took her out of school when she was in the third grade.

School and Its Lessons

Silva’s children attend the school at Quilombo Cafundá Astrogilda, where tutoring, crafts, and sports classes are offered. Teachers are volunteers. There is also a library that was built through donations, and a thrift store that sells clothing, shoes, and accessories priced from R$1-5 (US$0.25-1.25). 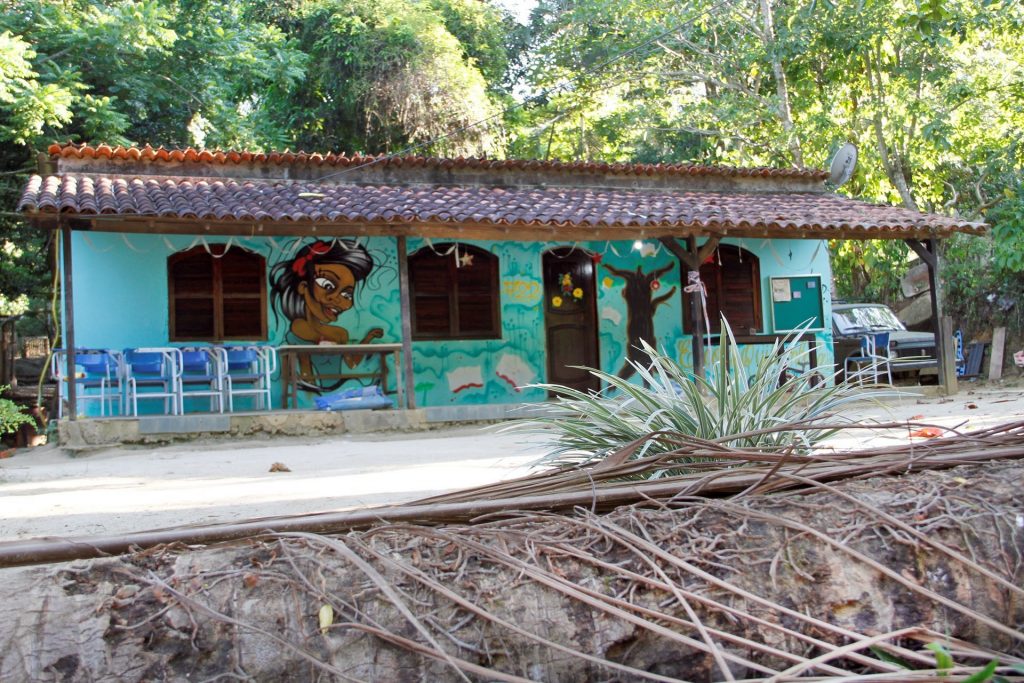 The school, opened in June 2018, is a project of Maria Lúcia Mesquita Martins, 56. Martins is the daughter of Natalina and granddaughter of Astrogilda da Rosa Ferreira Mesquita—the freed slave who, in the second half of the 19th century, sought shelter in the forest alongside her husband, Celso dos Santos Mesquita.

Astrogilda was one of the local midwives and also acted as a healer. She and her husband led, in the 1920s, a small umbanda religious center, which is no longer active. The quilombo, which was certified in 2013 by the federal Palmares Foundation, is located in the Pedra Branca massif by the neighborhood of Vargem Grande.

The school is located next to the bar and restaurant Tô na Boa, which has been operating for six years under the management of Martins’ daughter Gisele, Astrogilda’s great-granddaughter. The 33-year-old mother of four, two of whom are adopted, is also part of the quilombo’s solidarity network. 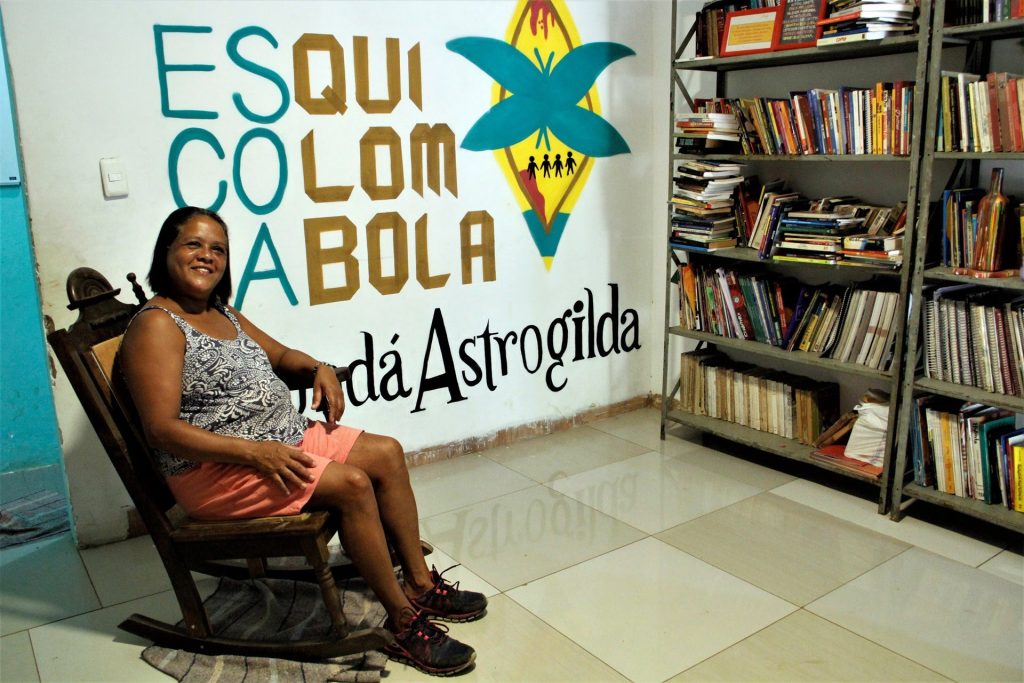 From her childhood, she remembers that the food was the result of what had been planted in the field. Plates would contain banana soup, Malabar spinach, and green papaya stew. “My grandmother used to plant. Today, everything has changed, and people have forgotten the importance of planting. Money was tight, but there were vegetables.”

Today, Gisele Mesquita Martins employs local young people and adolescents. “I see that we create opportunities. I do not want to see the younger generation get lost because they were not given a chance. Among the 23 people who work in the kitchen, in service and delivery, 90% are community members,” says Martins, who studied psychology but preferred to switch to a culinary course. 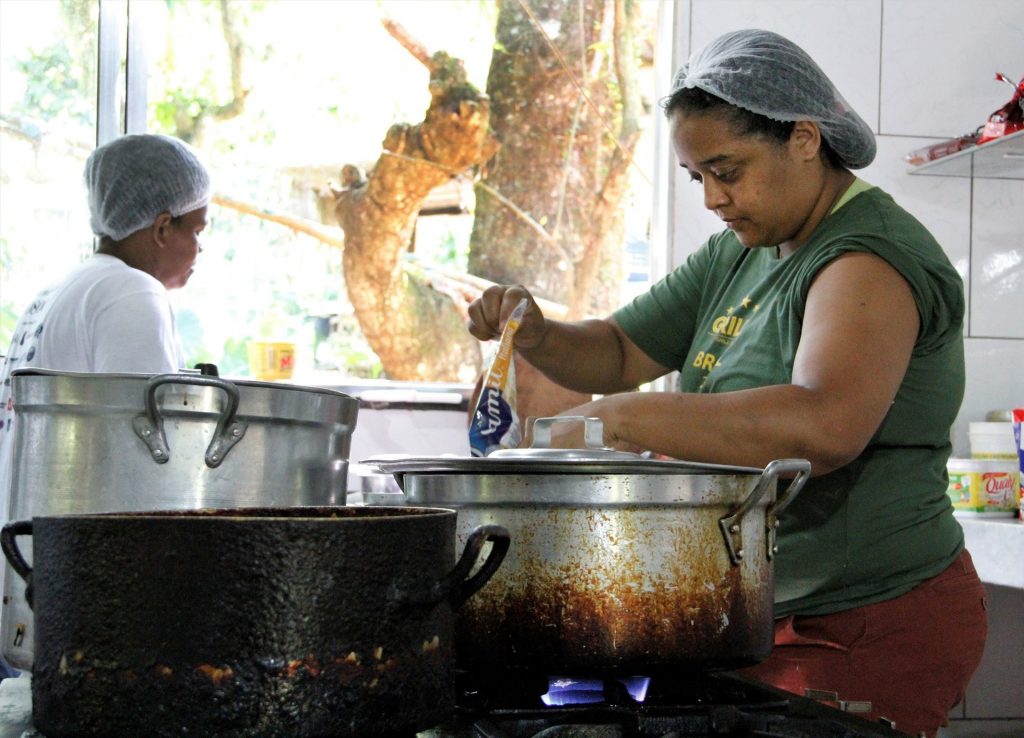 The path of education is Maria Lúcia Martins’ life project, who learned to read from her mother, dona Natalina, at home.

“We want to open a public library so that people can read books. Children receive additional tutoring in subjects in which they are struggling. But I have noticed that the main problem is literacy,” says Martins. She travels through the entire community, which consists of about 3,000 descendants of quilombolas. She worked in the Children’s Ministry, where she learned how to make “multi-mix,” a food supplement that she has distributed for free ever since leaving the ministry and starting her community work.

To make multi-mix, you need eggshell and cassava leaves, which are dried and roasted. Then you add wheat bran and mix everything together in a blender to turn it into a powder. “The multi-mix can be added to food or milk. We also sometimes mix it with the milk powder and distribute it to the mothers for the children’s porridge.”

Astrogilda’s descendants struggle for the preservation of their identity and culture. “We need to preserve our history. I say to my granddaughters: ‘Let’s plant, let’s make crafts.’ We need to get out of this condition of poverty. Sometimes, a vegetable garden helps a lot. Children need to get back in touch with nature,” says Martins.