“I’m going to call on two MCs to get up here and battle it out. What does Pac’Stão want?” “Blood.”

Thus begin the hip hop battles at the Roda Cultural do Pac’Stão in the favela of Manguinhos, in the North Zone of Rio de Janeiro. The opening battle cry refers to the “blood battles” of the roda (circle) wherein rappers attack and ridicule their opponents with words, as opposed to “knowledge battles,” in which the rapper with the best rhymes on a given subject wins.

“If kindness begets kindness, what does killing generate?”

The above verse, shouted out in one of the battles, recalls that war is not just a metaphor built into the battle cry that opens each battle, or in the very choice of the term “battle,” common to other rodas as well. “It’s called Pac’Stão because we’re here on the Gaza Strip,” explains Xandy MC, a resident of the nearby Jacarezinho favela and one of the circle’s organizers. In Rio, “the Gaza Strip” is the name given to Rua Leopoldo Bulhões, the street that runs alongside the train line between Manguinhos and Jacarezinho. Though this Gaza Strip is much closer to the Pac’Stão Roda than the original Gaza Strip is to Pakistan—some 3,000 kilometers separate the South Asian country from the Palestinian territory constantly under attack from Israel—the two Rio territories connect to their namesakes, construed in the popular imagination as belonging to a “Far East,” through the narrative of conflict.

The choice of the name Pac’Stão, then, while alluding to the historically embattled country, uses the war narrative to subvert the logic of real violence affecting the region. “What motivated us to organize the roda was oppression, specifically police oppression. We wanted to give a voice to the many people who have been verbally and physically assaulted,” explains MC 2D, another of the organizers. “I have experienced it myself, that’s why I want to keep doing this. The cops grabbed my pregnant wife by the arms. I tried to exercise my right to accompany my wife and the police hit me twice in the face.” Xandy adds: “The role of the police is to maintain the peace, but we never live in peace.”

Pac’Stão is also a play on the acronym “PAC,” Brazil’s Growth Acceleration Program (Programa de Aceleração do Crescimento), and the suffix “-stan,” meaning “place of” or “land of” —so, the land of the PAC. The roda takes place in an area which was named “Citizenship Plaza” by then-governor Sérgio Cabral. It once housed the Army Supply Depot (DSUP by its Portuguese acronym, an inscription that can still be seen on the remaining tower, as shown in the photo below), but nowadays is better known as simply “PAC.” The reference to the program comes from the infrastructure built around it, which includes a housing development, a state college, a skate park, a Park Library, a Women’s House (Casa da Mulher), and a Youth Center.

Just as building houses is not the same as building a city, providing a space with urban installations but little maintenance is not the same as promoting citizenship, the former governor’s purported intention. The Women’s House has been closed since 2016; the youth center, which was supposed to be a benchmark for other initiatives, has experienced extensive looting and vandalism; the Library (now renamed the Marielle Franco Library), after having been shut for two years, reopened in 2018, thanks to resident organizing, but with significantly reduced hours. The task of occupying the plaza and promoting citizenship—when the facilities that should have been there to support the population have been scrapped—has been taken up by the Pac’Stão roda for the last two years.

The PAC program was also responsible for the train line elevation project, which led to hundreds of evictions. The stated objectives of the elevation project included creating play areas and offering residents more safety by allowing them to cross under the train line, rather than crossing over the tracks, and also integrating both sides of a divided community. On the contrary, it can be argued that the elevation of the train line has actually increased the sense of insecurity in the area: the newly created space is not occupied by traders or urban facilities; there are now dark and empty spaces, and trains are more vulnerable to gunfire. It is not uncommon to see train windows riddled with bullet holes, and line interruptions have become commonplace. 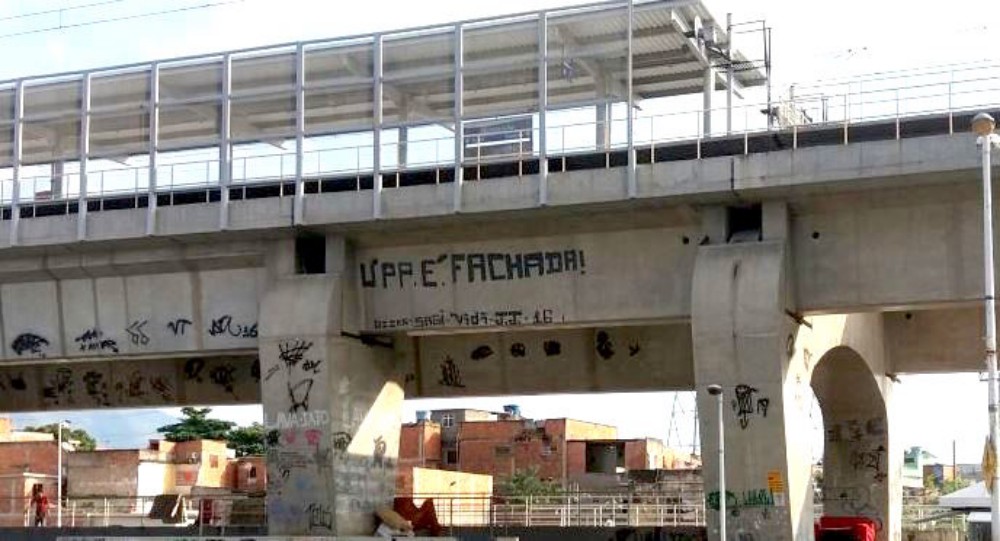 In addition, the PAC did not heed residents’ demands, which prioritized investments in sanitation. “We are in the middle of a flat favela where there are two rivers that flood. This has happened time and time again for 40, 50 years,” explains Franciele Campos, from the Women of the Wind (Mulheres do Vento) collective, which brings together audiovisual producers and also organizes the Manguinhos Slam.

For the roda organizers, key to Pac’Stão’s mission is the slogan “For the Love of Culture” reflected in the roda’s Instagram handle. This love of culture manifests itself in multiple expressions, and, here, literally and metaphorically, books are never far away. The circle’s hip hop battleground is framed by the Manguinhos Park Library sign, in a redefinition of the use of the space. “It’s a cria pra cria [“by those born of the favelas for those born of the favelas”] circle, to free ourselves from guns, because books are so much better,” says 2D. Despite his casual tone, the poetic vein is clear in his wordplay between “to free,” livrar, and “book,” livro. Some say these rappers encourage reading more than a library does. “People who don’t read with words will read with images, sounds, movements,” added Xandy.

Xandy believes that it is necessary to “teach [young people] something more interesting than math.” To this end, the group visits schools and units of Rio’s Department of General Socio-Educational Action (DEGASE, the juvenile detention center). In one of their workshops, at the CRIIAD (Integrated Resource Center for Adolescent Care, a semi-confinement unit) in Caxias, besides screening a film on the history of hip hop, they ran a poetry workshop. “When I asked who liked poetry, nobody raised their hand. Then I distributed a piece of poetry and asked the question again. The poetry piece was actually song lyrics by Racionais MC’s,” recounts 2D.

“Your son is not a military officer, he’s a militant.”

This is a quote from Xandy. “We write because it’s either that or be depressed. This is real democracy, this is a true exchange of ideas. This is power! Outside the favela, they don’t want this exchange of ideas happening. They don’t want to hear me talk,” states the MC. “We already have culture here, we don’t need to bring it in. People are not interested in bourgeois culture, but we see so many incentives promoting this version of culture.”

Xandy also discusses the lack of space that rodas have dealt with since the 1990s. “People set up a roda in the City of God, at the Interactive Circus Center (Centro Interativo de Circo, or CIC) in Lapa, which had a fire in 2009. Today we have the same problem—in Cidade Alta the roda runs in a space that was previously a rubbish dump.” In 2018, a law was established that recognizes hip hop as part of the state’s cultural heritage and also stipulates that rodas no longer need police authorization, as long as they do not use stages or bleachers.

In addition to resisting police oppression, “we also rhyme to put food on our plates,” as 2D says. “When we apply for jobs, we get asked where we come from. ‘From Manguinhos? How are you going to get here?’ I don’t even have bus fare. It’s expensive.” Rhyming has gotten Xandy a trip to Portugal, an award for winning the Terra do Rap Festival, where he beat out 97 other MCs.

For Franciele Campos, the importance of rhyming is that it allows MCs to be protagonists of their own narratives: “More than talking about ourselves, we need to talk about each other, our work. Show what people are doing, who is on the frontline, dealing with genocide every day. The coolest authors I know are here around me. Tag the artists, get the new 2D clip out. We need to show that we are alive. We must not be isolated, we want dialogue, we want to show that we are alive.” 2D agrees: “The rhyming roda is born from a need for us to have a space to express ourselves. Rap and hip hop are not African culture. They are an expression of resistance to racism outside Africa.” Check out their new clip below:

“Reality here is brutal, but it’s beautiful too. It’s beautiful here. We don’t bite. Except when you close your mouth.”

“Pac’Stão will be in party mode!” reads an Instagram post announcing the circle’s two-year anniversary on July 15th. Despite taking place on a Monday night, the fact that school is out for break helps explain the crowded streets and the multitude of motorbikes zipping in and out. Once the stage and equipment are assembled, it is almost 10pm when the battle begins, because “the sound got stuck in Manguinhos,” Xandy explains.

After twelve battles, the finalists are announced: Mr. PAC da ZN, Vydau, and Catu, the only woman to participate in the battle. Her daughter would be the one to give the battle cry for the night’s final performances: “I’m going to call on two MCs to get up here and battle it out. What does Pac’Stão want?”

The winner of the night was Mr. PAC, otherwise known as Manguinhos resident Patrick Nascimento. Mr. PAC describes how he has been coming to the battle since 2012, when it was still called the Manguinhos Roda Cultural and was taking place in front of the local health post. He also explains that his stage name is a cross between where he started out and his funk career, as well as an homage to the late funk legend Mr. Catra.

During breaks and after battles, the event also included performances from DJs, the Angolan singer Azzy, and Arrocha DJ 2T, from the dance party Baile da Colômbia. Like Baile da Colômbia, which takes place in the Complexo do Lins favelas, the region also has an “international” themed dance, called Baile de Paris, which takes place in Jacaré. This recent tendency to rename dance parties can be explained as an attempt to reduce the stigma surrounding funk events. The names chosen, ranging from California to Dubai, contrast sharply with the image evoked by Pakistan.

The singer Azzy also invited street artists to the stage that she met performing on public transportation: Dorgo DJ, from the Instituto Enraizados rap group in Morro Agudo (in the city Nova Iguaçu, part of Greater Rio’s Baixada region) and representatives of the Nós da Rua poetry slam and the Conexão Favela & Arte community arts program. 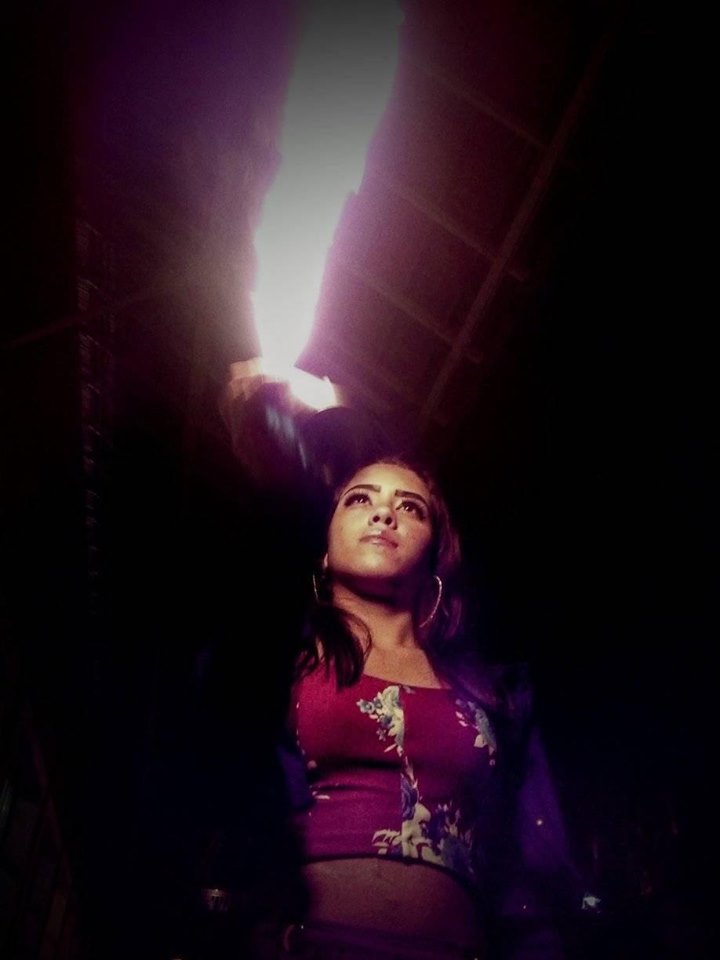