On August 10, residents of the small and intimate Trapicheiros favela in Rio de Janeiro’s North Zone organized a traditional winter festival “June party” (though this one was organized in August)—to celebrate community integration and give thanks to Project Manivela, which supported the community in building its children’s playground over six months of construction.

Project Manivela was started by Federal University of Rio de Janeiro (UFRJ) students to catalyze social change in Rio’s suburbs and favelas. In Trapicheiros, residents and students worked together, and identified the construction of a recreational area as a community priority.

“We at Manivela had the view that the construction process should be totally collective. We were there to exchange knowledge and experiences. It was a continuous process of building trust, which eventually turned into a friendship,” said Joyce Trindade, co-founder and coordinator of Manivela’s actions and networks. “Almost all Manivela volunteers come from peripheral neighborhoods [too], and this was instrumental in building trust and teamwork. We literally put into practice the concept of ‘us for us.’”

The playground was made possible through donations via social networks and sales of used clothes, and partnerships with different government programs, such as Rio’s waste collection utility, Comlurb, which contributed to assembling the playground equipment and fence through its Rio Novo Olhar urban revitalization program.

The playground equipment was built with recycled material, including tires.

“This community is over one hundred years old, but we didn’t have a recreational area, a place for children to have fun,” said Paulo Roberto, president of the Residents’ Association. 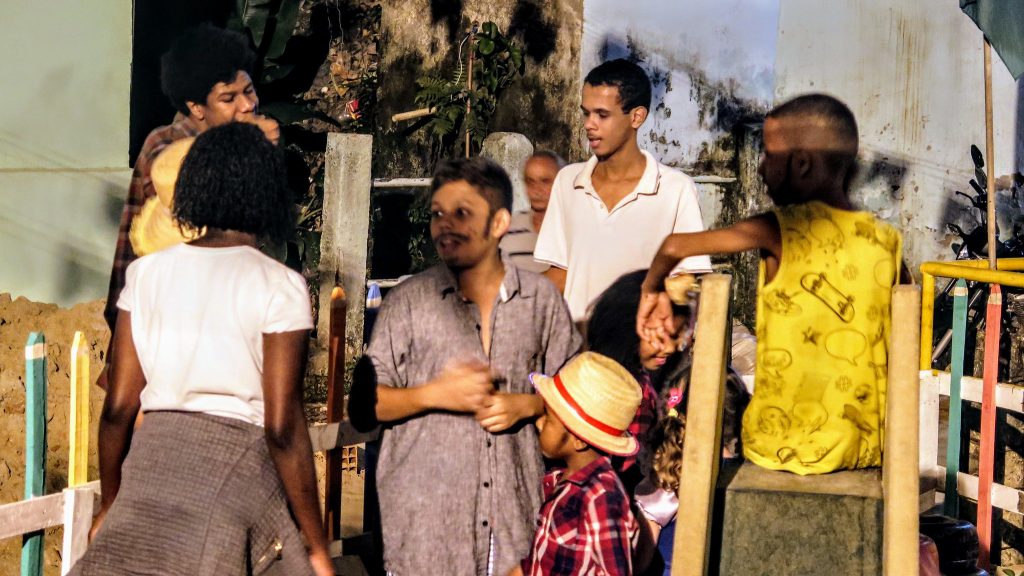 “The area was abandoned and full of tall weeds, breeding mosquitoes and potentially bringing snakes. It became an invitation to dump trash,” said Ailton Lopes, second secretary of the Residents’ Association. 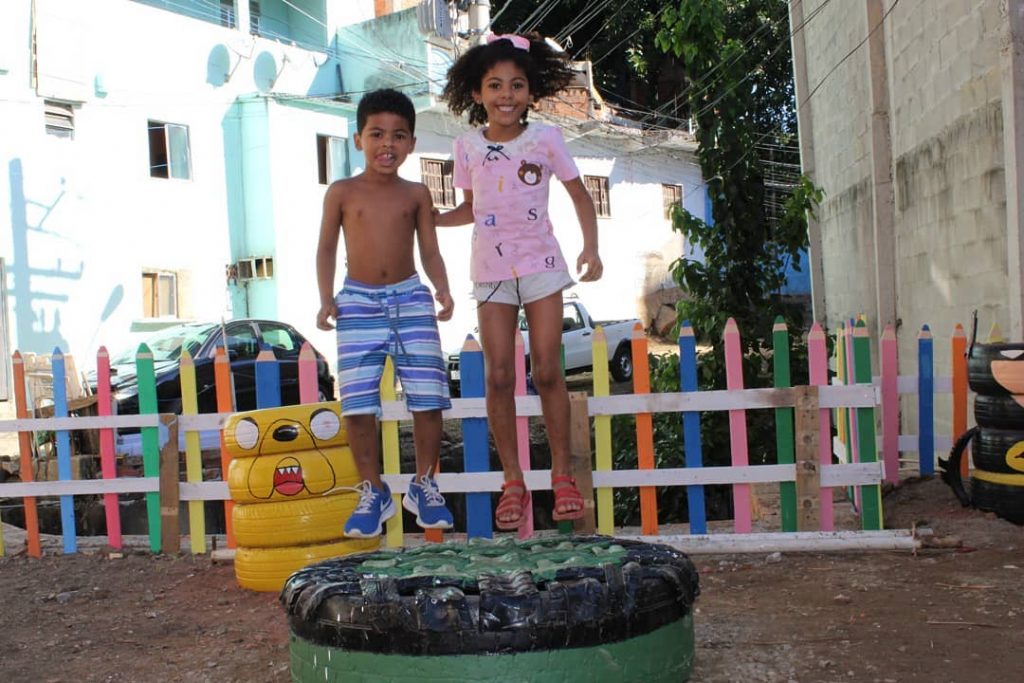 Beyond promoting recreation for children in the community, the occupation of the local space is symbolic as a form of resistance to threats of eviction. The century-old community recently made headlines when residents of a neighboring condominium incorrectly denounced the emergence of a “new favela,” saying they feared the encroachment of drug traffickers. 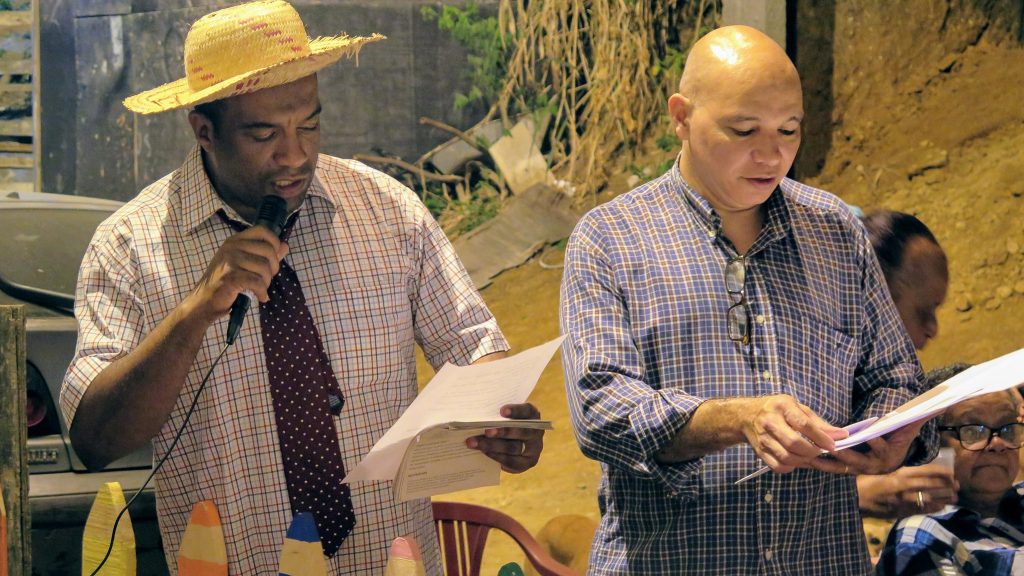 Faced with such threats, the small community grew stronger. “Trapicheiros residents carry an ancestry and a collective power that has immense potential. There are generations of the same families living on this land, who, out of fear and chaos, when their rights were put at risk, saw that the only way out would be to organize,” said Trindade. 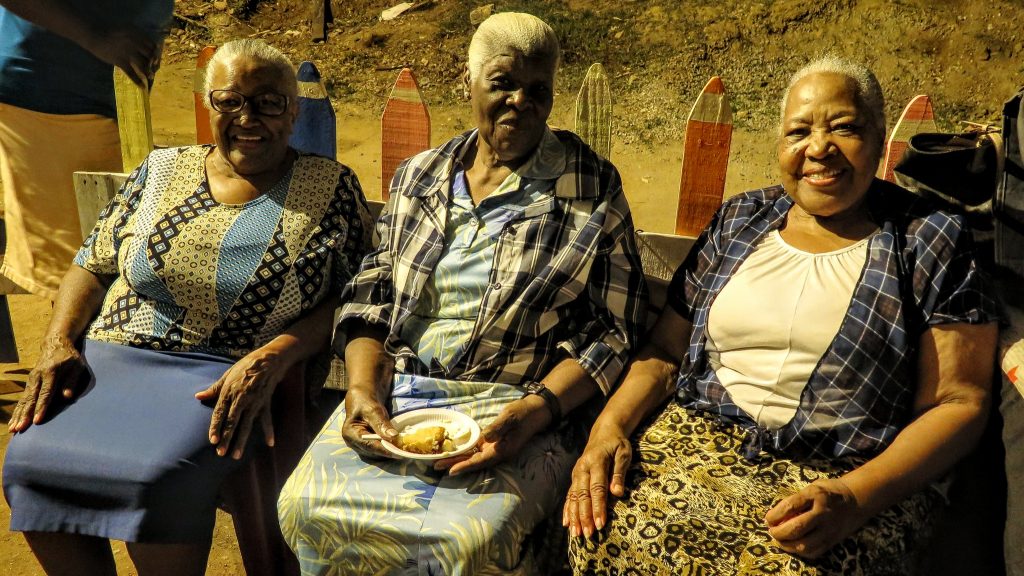 “After the real estate development [was built]…complaints began, saying that they were invaders who were occupying a nature preserve. And from that point the city turned against them [Trapicheiros residents],” explained Marcello Deodoro, who attended the party and is a member of the Residents’ Commission of Indiana, a neighboring favela.

In fact, Project Manivela ended up involved with Trapicheiros thanks to the Indiana Residents’ Commission. “They had a meeting with us and saw that we already had everything ready to go,” said Deodoro. Indiana is already supported by a group of architecture students working on community upgrades. “We are always strengthening the solidarity between our communities. So we referred Project Manivela to Trapicheiros, who needed the support more than we did. The next step is to mount a sign displaying the community name at the entrance,” said Deodoro.

“The community is very unique in the region. They fight side by side for housing and community improvements and they have had wonderful victories. It’s a tough fight [against eviction threats and stigma], but a very possible fight. The struggle for the regulation of their land, for regularization. They are very strong in the fight! ” proclaimed City Councillor Reimont Otoni, who recently filed Bill 1356/2019, which aims to declare the community an Area of Special Social Interest (AEIS). The objective, according to the bill, is to provide “quality of life and [extend] residents’ citizenship rights through public policies aimed at upgrading, land regularization and environmental protection.”

Trindade echoed Reimont’s comments about the uniqueness of Trapicheiros: “They are unique! It is an extremely family-orientated community that has the magic of everyone feeling at home. Spending my weekends at Trapicheiros easily became part of my routine because it feels like I am going to visit my family… It was organic. They bring people together and let us be part of their story. They adopted us.” 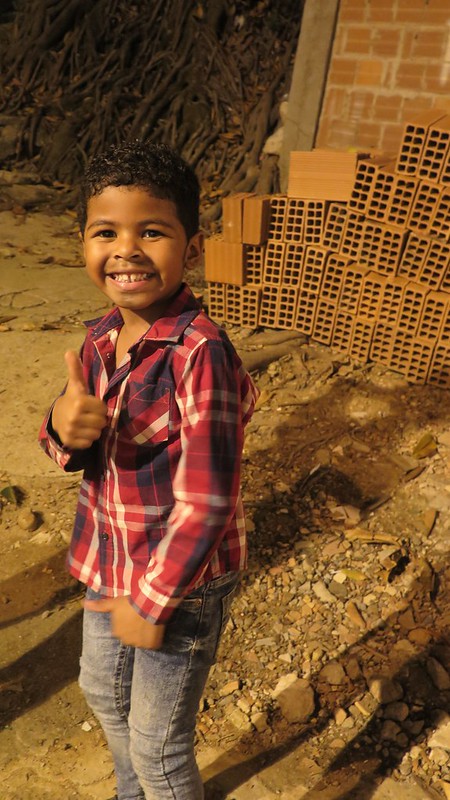