Stepping into the classroom at the Lira de Ouro Arts and Music Society, also a historic carnival block founded in 1957 in downtown Duque de Caxias, in Greater Rio de Janeiro’s Baixada Fluminense, one would never imagine that the cheerful and mischievous children gathered there are in recovery. Not recovery from poor grades, but from violent life histories—they’re there as part of an ongoing pedagogical therapy. What’s giving these kids the safety to return to their everyday lives? A rhythm born in the inner cities of the USA: hip hop. 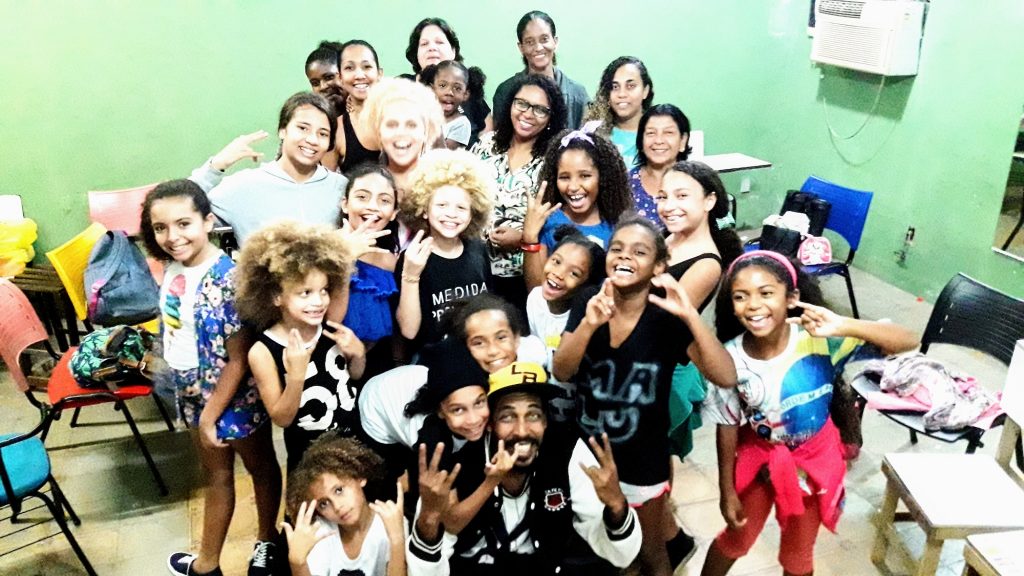 To better understand this story, we need to get to know the life of dance teacher and DJ Diego Fábio dos Santos de Jesus, a.k.a. Zulu Tec Nykko. Before becoming a young rebel, as he describes himself, Zulu spent part of his childhood sick in bed. For three long years, he lived with asthmatic bronchitis, followed by a heart murmur (an abnormality in blood flow that travels to the heart).

“My health was very fragile. I couldn’t do anything at all. I spent one month at home and three in the hospital,” says the rapper. Once he was cured, the time he spent locked up in his room made him want to experience everything he lost, often intensely, and not always in the safest way. From age 15 to 17, he had to repeat sixth grade four times in a row, even going an entire year without attending class. He spent several nights at a time at funk parties in Chatuba, Mangueirinha and other peripheral regions of the Baixada Fluminense. This all changed when he discovered a social project in the Lixão favela, where he entered a street dance group.

He wanted to change his life and find meaning in everything going on around him, but things weren’t turning out well. “I didn’t have the motor coordination necessary for the steps, but I wanted to learn. I suffered bullying from my colleagues all the time, but I persisted. Then one day in 2000, at the Rio Sampa [a concert hall], we did our first gig. I was a disaster, and the dance coordinator said to me: ‘go home, kill yourself and then come back here,’” he remembers.

A Choice between Ballet and Funk

What could have led to a relapse into his unruly daily life turned into the inspiration that Zulu needed to carry on. Through acquaintances, he learned of a dance school in Méier called the Art and Dance Cultural Space (Espaço Cultural Arte e Dança). He explained his motor inaptitude problem to the instructors and they recommended the one physical expression that could work to calibrate his movements, offering a more rhythmic discipline: ballet. Once he got over the prejudice against the “girls only” dance, he still had to meet one more condition: that he return to school and bring his report card back with good grades every month. Done deal. After negotiating the money necessary for transportation back and forth, it was time to get back on stage.

As time went by, Zulu attended various other dance groups until he found the hip hop movement. His passage through NGOs and social projects allowed him to create his own child-oriented teaching methodology, making him an educator. Soon, he was already teaching classes at the project he helped create, Cypher na Rua (Cypher on the Street). In hip hop language, a “cypher” is a group of friends that come together for MC battles and other activities related to the movement.

Having begun operations in 2015, today, the project now looks after around 40 children from different social backgrounds; stories of resilience abound. One such story comes from Lua, daughter of the artisan Fátima Oliveira. She is white with curly hair, since her mother is white and her father black. Her ethnic mix meant that Lua was bullied at both the schools she attended. She kept quiet, timid, and gained weight because of the anxiety caused by all the insults. “They actually got scissors, saying they were going to cut off her ‘bad hair.’ How can children be so cruel like that?” Oliveira asks, outraged. However, through hip hop classes, the girl has found her spunk and the confidence to be exactly who she is.

The cultural producer and afro-dance teacher Luna Leal Santos, trained in the subjects of Body, Education, and Diversity, says that puberty and bodily changes, which tend to happen more dramatically between the ages of 10 and 13, have even more of an effect when questions of ethnicity are involved. “Aside from the natural changes in their bodies, kids find out their color, their lips, the texture of their hair and end up suffering the consequences of bullying and racism.”

That’s where the therapeutic aspects of bodily expression born from a movement like hip hop come in: they can become part of a child’s life, aiding in the overcoming of trauma and recovery of self-esteem. “Because I teach afro-dance specifically, I help by bringing the culture of a people, the ancestral teachings that help build a contemporary conscience of oneself, the recognition of belonging to a specific group, just like hip hop does. In this kind of class, it’s important to bring in different subtexts to help in everyday matters. The girls especially need to understand that their hair is beautiful, that their mouth is pretty,” explains Santos.

Recognition and a Healthy Life

2019 has boded well for Cypher. On June 17, the project was awarded the Heloneida Studart Diploma, a form of recognition and incentive for cultural best practices promoted by the Rio de Janeiro Legislative Assembly’s (Alerj) Cultural Commission.

Cypher was also one of the seven winners of the “Support to Local Actions–Challenging Racism with a Focus on Public Security,” grants, launched February 25 as part of the Right to Memory and Racial Justice project at the Fórum Grita Baixada. The grant sought to provide support to those initiatives, collectives, and organizations in the Baixada Fluminense with ideas on how to use art or information and communications technology (ICT) to confront racism, with a focus on public security.

“We chose the Cypher project because they work with an audience that few people are willing to dedicate themselves to, especially if we consider what was asked in the grant application: racism and public security, but with an educational approach to kids, even if it’s in a more subjective manner. They came through as being solid in what they do and discuss. Not just with the kids, but also with their families,” explains Fransérgio Goulart, coordinator of the Right to Memory and Racial Justice project.

Beyond the loving and political recognition promoted by hip hop, its practice is also a guarantee of good health. For four years, James Sallis, who teaches preventive medicine at the University of California, warned about the dangers of child obesity and its effects on the health of children and teens between ages 5 and 18 in the United States. The topic is especially important for girls, who, according to the researcher, have fewer opportunities to practice physical activities than boys. He advised that, in order to reverse what he called a possible epidemic of overweight adolescents, youth would need to practice one hour of “moderate-to-vigorous physical activity” every day, without requiring excessive effort.

On determining the best rhythm for the task, the professor found that hip hop was the best fit for the task. Factors like the estimated duration of body temperature elevation for the exercises and listening to the teacher’s instructions were key to why hip hop being elected as the best dance style for a healthy life.

“Dance is a golden opportunity to contribute to the health of girls while they’re enjoying moving and being with their friends and building their physical competence and all the other things that dance does,” explained Sallis in May 2015 to Time Magazine.