Though there exists no yet functioning Community Land Trust (CLT) in Brazil, the bleak urban reality the country currently faces would benefit profoundly from new experiences. Brazilian cities suffer from, on the one hand, vast territories under irregular land conditions (in terms of titling and compliance with urban planning regulations), and on the other, the expanding presence of large-scale real estate speculation. In Rio de Janeiro, around 24% of the population lives in favelas, spaces which, when left to their own devices, offer affordable housing and develop strong local qualities, at the expense of diminished rights, including suffering the risk of eviction by the authorities. Meanwhile, once titles are given and rights upheld, these same areas can be prone to real estate speculation and gentrification, whereby residents similarly lose their ability to remain in the communities they have built. In light of this “damned if you do, damned if you don’t” element of individual land titling in favelas, it has become necessary to find new ways to ensure established favelas’ right to stay and benefit from the development of their communities, including those in high-value urban areas. The goal is both the permanence of these communities in their territories of origin and the security of their ownership. That’s where the CLT comes in.

CLTs can be said to have “arrived” in Brazil in August of 2018, when members of Puerto Rico’s Fideicomiso de la Tierra Caño Martín Peña flew to Rio to run a series of workshops promoted by the NGO Catalytic Communities.* The goal of these workshops was to learn of the Puerto Rican experience specifically with the retrofitting of the CLT model to informal settlements, to better understand the CLT instrument, and discuss how it might be effective in the protection of affordable housing in Brazil. Caño Martín Peña presents one of the rare cases in which a CLT was successfully implemented in an informal community. Their experience has opened doors for considering CLTs a potential urban innovation in the context of Brazilian favelas.

Following five days of workshops with 130 attendees, fifty participants decided to establish a permanent Working Group that would meet periodically to study the CLT model in-depth, spread awareness and knowhow about the CLT, and address the question of how CLTs might be implemented in Brazil. Counting on a diverse membership—initially 50 members, including community leaders, participants from State organs like the Land and Cartography Institute of the State of Rio de Janeiro (ITERJ) and the Rio de Janeiro State Public Defender’s Office, researchers, architects, urbanists, and students—the group began meeting monthly to discuss how the CLT may be a potential solution for ongoing problems in Brazilian cities, such as the housing deficit, gentrification, and territorial segregation.

The Working Group’s first activities were directed towards ensuring internal understanding about CLTs within the Working Group, and identifying communities interested in the project. Right away, four Rio de Janeiro communities registered a strong presence: Vila Autódromo and Conjunto Esperança in the city’s West Zone, and Trapicheiros and Indiana in the city’s North Zone.

The CLT Working Group then met in each of these communities, touring them with local leaders and sharing basic information about the CLT model with interested residents. Based on resident interest and communities meeting certain criteria established for a pilot, further workshops were organized in two of the communities: Trapicheiros and Esperança. A methodology was developed for a 6-hour introductory diagnostic workshop, based on techniques learned during the Caño workshops in Rio previously. Here, the community’s qualities, fears, and reasons for wanting (or not wanting) land titles are identified through a number of small groups, and potential benefits and downsides of their various options at land rights (including the CLT model) are assessed. Residents in both communities came out wanting to know more and start down the long road to a CLT pilot.

Since the original meetings and workshops, a number of further, deepening activities have been held in both communities, each with the goal of reaching as many members of the community as possible and further ensuring the communities’ resolve. These include workshops, a “Memories Party”, the launch of a community playground, and door-to-door visits by community leaders and Working Group members.

In addition to forming a Mobilization committee within the Working Group that handles engagement with communities such as that described above, the Working Group established a Legislative committee to address legal and juridical aspects of implementing CLTs. Though the group determined that current Brazilian law already allows for the creation of CLTs, it was clear that bringing the model to Brazil would be much more effective were there already a specific CLT-enabling legal provision. For example, rather than having to acquire land and then pool it into a CLT, with special legislation, government could directly transfer public land to a CLT. Meanwhile, local governments could recognize CLTs’ roles in guaranteeing permanently affordable housing through subsidies and reduced taxation. These are the sorts of considerations being discussed by the Legislative committee of the Working Group, whose end goal is to develop legal proposals such as these for introducing the instrument into Brazilian law. These proposals can come in the form of a one-time alteration in a certain legal provision, the construction of an entire legal chapter on the CLT to be introduced into current law, or, principally, the creation of a new law specific to CLTs.

The permanent Rio de Janeiro CLT Working Group thus functions with two autonomous and complementary fronts: that of mobilization and legislation. The mobilization front seeks to work with partner communities in order to construct a pilot project for the CLT, while the legal front seeks to create legal innovations in order to facilitate the installation and dissemination of the instrument in Brazil. The participation of partners and interested parties in the project has since grown: today, the working group includes more than 150 collaborators, representing diverse public institutions and civil society organizations. The group continues to branch out, incorporating new and diverse perspectives, giving both energy and depth to the project’s development. 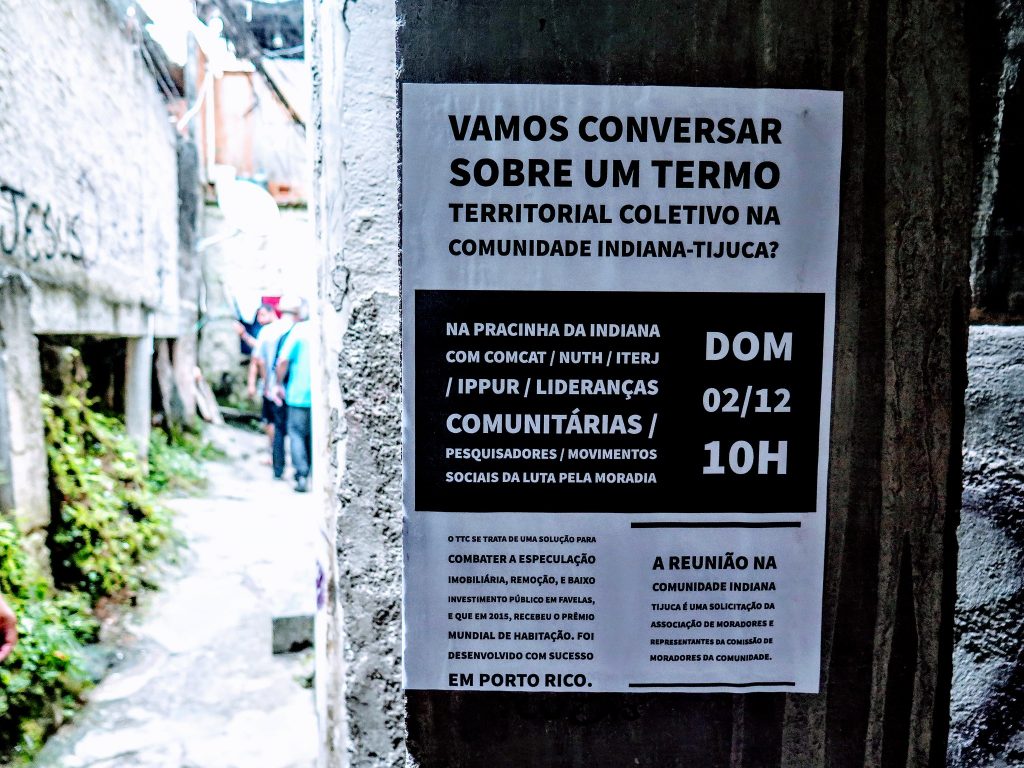 In August of 2019, the CLT Working Group celebrated its one-year anniversary. None of this would have been possible without the group’s members, and principally, the energy of the favela communities that believe in the project. We know that there is a long road ahead, but we are committed to our final goal of creating the first CLT in Brazil, allowing for the expansion of the model throughout the country, the rest of Latin America, and the world.

This is the sixth article in our series on the growth of the global CLT movement. Click here for more.

*RioOnWatch is a project of Catalytic Communities