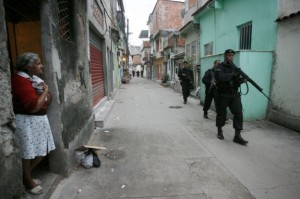 In the early hours of Sunday morning, the favelas of Jacarezinho and Manguinhos were occupied by BOPE (Special Forces Battalion) assisted by Navy tanks, military police (PMs), civil police and Federal Highway Police aircraft in preparation for Police Pacifying Units (UPPs) to be installed in the next few months.

A pattern has emerged in the media coverage of government operations to take control of Rio’s larger drug gang run-favelas. Local coverage focuses squarely on the authorities: accompanying the police operation, reporting the size of the operation, quantities of drugs and arms recovered and the announcement of infrastructure developments to follow. International coverage frames the operations within the narrative of Rio’s “clean-up” in preparation for the World Cup and Olympics 2016.

All coverage this weekend has emphasized that Jacarezinho and Manguinhos have in recent years become violent centers of Rio’s drug trade. Yet this obscures the reality that these large communities established by factory workers in the first half of the 20th century are places of resilience, resistance and creativity and have throughout their history been neglected, even attacked, by the state.

This weekend’s occupation should represent a turning point in the recent history of these communities, yet community voices are conspicuously absent from the media narration of this process. Here we republish two community journalists’ accounts of the occupation process in Jacarezinho and Manguinhos.

Léo Lima is a photographer from Jacarezinho. He works on the Observatório de Favelas project Imagens do Povo and is a member of the Favela em Foco mutlimedia collective. His work has been shown in New York. Over the last few days he has posted Facebook updates on the occupation of his community… 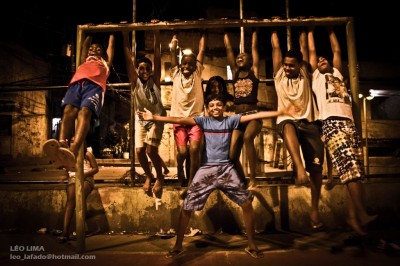 There’s only talk of the UPP in Jacarezinho.
We’ll be keeping a live eye on this process so that there are no rights violated.
Human rights folk, don’t stay at home, come up the hill.

If the press isn’t ready to do serious coverage of what happens, facts will be hidden under the carpet.

3PM: On the eve of the police coming into Jacarezinho,

residents of the top of the hill already saying their goodbyes
empty alleys and lanes, fear, anguish, closed bars.

We’ll see if the state will actually be present in the area.
And to me, the state isn’t just the police, the supposed security.
Residents need to understand that if there’s a time to hold the state accountable, it’s now.

I won’t sell myself 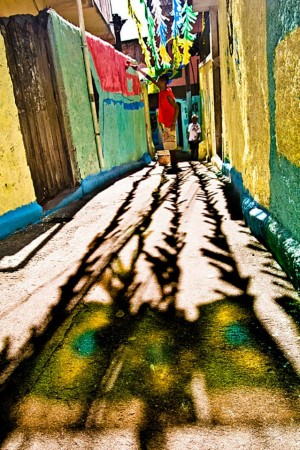 If it’s to take advantage and enjoy, it should be for all
Without sides, I don’t want to be the full plate, the little princess with her eye on the UPP in Jacarezinho.

We will all make the difference.
Together we will demand the state be present.
Local culture cannot be banned by this entrance [of the state]
We have to have appropriate solutions so that things go well.

I will not be another one of your pawns
I will not have my dignity rescued, I’ve never been ignoble.
If it’s good for some, it should be considered in a true way, not make-up.

We never stop doing things around here
If there’s no dialogue, there won’t be a solution
If there’s no exchange, it’ll turn into a business.
And being a business, some will always get screwed!

6PM: Does the BOPE have permission to kill?

10:30AM: A battlefield. Manguinhos, Mandela, Varginha and Jacarezinho – Images of the armed forces’ operation from O Globo

11AM: Sérgio Cabral [Rio de Janeiro State governer] has just brought up that the people living in the CCPL building are, according to him, in an inhuman situation.

Woah, and the problem of this happening and not having a solution is whose?
The residents? (That in a country with many problems which include housing) they search for a place to protect themselves from the sun and rain? 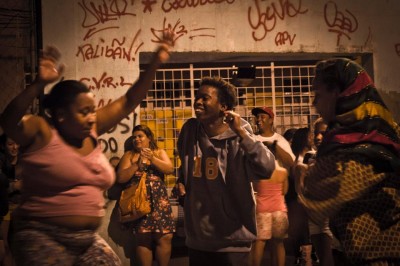 Saying nice things on the TV, I can do for you Mr. Governer.
Show people, at the very least, an outline of a solution for this.

Man, BOPE police officers have started going around in a quad bike with children from Manguinhos, haha. Meanwhile the police officer is once again treated like a hero.

The revolution will not be televised. 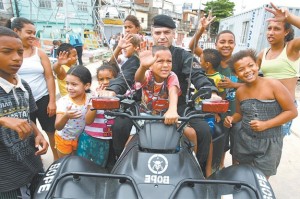 3:10PM: Residents’ salaries don’t go up, but the IPTU [city housing tax] will be charged, and water, and electricity too… Not that it shouldn’t be charged, but there needs to be an adaptation first, mainly financially.

The start of the end of favela residents.

3:20PM: The police occupation in Jacarezinho has already started to change my life: my mom just invited me over for meat-filled pancakes. Check it out!

I wonder if she already has Sky there?

And a BOPE commander drinking with her?

Monique Cruz is a community journalist from Manguinhos. For the original report on Agência de Notícias das Favelas’ site (in Portuguese) click here.

We’re in a state of war? No my friends, we are not. 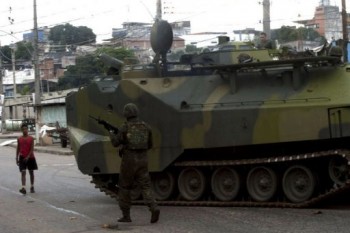 Manguinhos has seemed like a ghost town since Thursday night. Today, after all the tension generated by the constant feeding of fear by the mainstream media and day to day anxiety that increases in these moments, we’ve received Rio’s “peace forces.”

We woke up to the sound and trepidation brought on by helicopters of the most diverse sizes, and weight of armor. I turned on the TV and the area I go through almost every day was taken over by war tanks. Explosion (again) of a barricade, heavily armed police going through the streets. My dad, who would have worked today, couldn’t leave since his ride couldn’t get here. I decided to go out and see what things were like, taking the opportunity to take my dog for a walk.

In the Field of Hope you could see the BOPE’s armored diggers from afar, helicopter in the sky. On entering one of the alleys, two enormous black dogs. I stopped for fear of them attacking my little dog, but no, it was all ok. I asked my aunt how things were and alerted: “any problem call [the hotline for people to report crime and abuses],” they need to know that we’re alert and conscious of everything this means and more than this, that we’re ready to resist should we suffer abuse. After I passed by and saw the destroyed “barricade.” I went on to Avenida do Democráticos, where the gas station was a genuine intelligence center, many cars, many police. From there I went to the Estrada de Manguinhos. On the way we saw two war tanks with characteristic little lead soldiers.

Inside the favela, two more. Lots of BOPE cars, lots of people in the street trying to understand what was going on and of course, they wanted to see the tanks go by… The helicopters continue flying overhead and we still don’t have details of what’s going on. We wait for the scenes of the next chapters of this pyrotechnic show that probably represents “the future of Brazil.”