On Saturday, September 28, an urban planning workshop took place at the Manguinhos Park Library, in Rio de Janeiro’s North Zone, organized by BR Cidades—a project that promotes building socially just and environmentally viable cities—and Levante Popular da Juventude (Youth Popular Uprising). The workshop came about as a result of a forum organized by BR Cidades in June 2019, which saw strong black and peripheral participation, and a need to consider urban planning specifically in the context of the experiences of this particular community, one that is often ignored, largely because urban policy is primarily carried out by urban planning professionals and policymakers from white, privileged backgrounds.

“The idea is to build a pluriversal city, with various types of knowledge from other dimensions, not from academia, especially not a Euro-centric academia, which places public servants as the protagonists or as sole actors in the debate over urban management and planning. The fact is that the great majority of people are not contemplated by public policies, nor do they participate in the formulation of the policies that run their lives,” explained Tainá de Paula, a black woman from Rio’s peripheries, an architect and urbanist who coordinates the Rio branch of BR Cidades. “So creating a peripheral, insurgent, popular city planning like we’re doing here, is an attempt to turn the way we think about cities upside down. In my opinion, we can’t continue to talk about mitigating conflicts and eliminating urban territorial inequalities without including the principal agents involved and most interested in changing this system. Today, we got people who had to learn about projects, urban planning, public policy, and ideas about the State over the course of five hours, and they came up with a strategy to address the fiasco of public policies in Rio de Janeiro.”

The workshop started with participants identifying how their particular experience of the city related to the three proposed themes: public safety, sanitation, and mobility. Issues raised included: difficulties in getting around the city due to distances; the quality and cost of public transport; the feeling of insecurity, in particular threats felt from the State; the dearth of infrastructure for trash collection, sewerage and water provision—problems that manifest themselves more harshly in favelas and peripheries. Next, participants were invited to imagine the city they want to see in 100 years. “Let’s play that we’re building another city? Manguinhos could be our CCBB (Bank of Brazil Cultural Center, a major facility in downtown Rio) and we could come and watch Russian films here,” de Paula provoked. “Let’s think about Jacarezinho as an industrial complex 100 years from now, just like it was 100 years ago? How about we imagine Campo Grande as an area with resorts, with various hotels on the riverside? Why don’t we swim in the rivers of Campo Grande today?” she continued.

De Paula stressed that at some point it would become necessary for the city to deal with the areas of Barra da Tijuca and Rio’s South Zone in its planning as well, since they are also based on unsustainable development. But she made it clear that it is urgent to think about the North Zone and West Zone, where the vast majority of the population is concentrated and where services and infrastructure are more precarious. In order to think about urban planning solutions for these regions, the methodology of design thinking was presented, a tool for coming up with solutions, which in this case would need to be “bottom-up”, that is, coming from local people and not government.

“The solutions are given by people who live in the region, who know the problems and point out the solutions,” said Osmar Paulino, a geographer from Imbariê in Duque de Caxias, in Rio’s Baixada region. He continued: “The workshop was incredible for creating networks; there were people from different regions, collectives; and for giving people the tool of design thinking, which they can take multiply themselves in other contexts.”

For Pedro Paiva, a designer from Rocinha, in Rio’s South Zone, and Magda Gomes, also from Rocinha, who presented the tool by its English name (“design thinking”), the word “design” is “simply a fancy way of saying ‘problem-solving.’” It doesn’t require formal education—to him universities oftentimes are not creating solutions for the real world. An example of this was his grandfather, who created a chair to transport his wife, who was unable to move among the hilly alleys in the high part of the favela to get to the bus stop. “Then another neighbor needed the chair. So today the chair sits in the yard with the gate open so anyone can come and use it. My grandfather didn’t know how to read, but he knew how to create solutions to his problems.” In the workshop, Pedro emphasized that solutions should be oriented to the goal of providing for the survival of the target group, and to attempt to change the system and influence the creation and adoption of new public policies.

Each group then focused on a different theme discussed in the morning. The first step consisted of putting themselves in the place of a person going through the problem, in order to define the problem and think about what would be needed to solve it. Then the group brainstormed ideas for possible solutions and chose one solution to test and prototype. The group that focused on the issue of mobility came up with the following scenario: “João, who lives in the periphery and works in downtown Rio, needs quality public transportation to get to work on time.” The solution chosen to prototype was an app that would allow João and other workers to pay a fixed monthly, subsidized fee in order to have unlimited access to public transportation. The app would also allow users to make suggestions and report problems with public transportation in the city. The use of technology to solve the problems of those who are most negatively affected by mobility policies led one of the participants to conclude that “it’s a smart city of and from the favela.”

Meanwhile, the group that focused on public security identified the problem of city residents having their right to come and go curtailed by current security policies. The group discussed solutions including the demilitarization of the police and investment in intelligence. The direct action would be to designate a new State Security Secretary, someone who would advocate for the demilitarization of the police, promoting the humanization of public policies and an alternative attribution of power. “Current projects of power (e.g. the Military Police) do not include us,” de Paula agreed. “In the complete absence of urban planning—or in the existence of a genocidal form of planning, as in Rio, we have to stimulate a debate around this project (of military might) and the weaving of a social fabric so potent that it is able to establish itself as a new power. Our own project of peripheral power, popular, ours. We want to radicalize. It’s either with us, or not at all.”

The group that focused on sanitation, in its turn, based its work on the personal experience of one of the workshop participants, resident of the area, whose house floods when heavy rainfall causes the nearby Faria Timbó River to overflow. The group chose, among all the causes of such floods, to attack the improper disposal of garbage, which blocks gutters and often obstructs the flow of water in the river. The solution proposed was to establish waste sorting (recycling), supported by distributing informational leaflets and installing attractive graffiti-painted containers for people to use to sort their trash, placed in a local neighborhood square, ressignifying a space where residents usually leave their trash.

Having residents separate their trash would make life easier for those who earn their living as catadores (informal waste pickers), and it would also end the problem of organic waste being left spread out on the streets after catadores sort through the garbage before waste collection utility Comlurb makes it around to collect the trash. Besides the leaflets, the information campaign would also include the occupation of the Park Library’s theater—a space that is currently underused—in order to host a weekly film club, where a film would be shown followed by a public debate. The first film would be É Rio ou Valão? (Is it a River or a Sewage Canal?), which covers precisely the topic of floods in the area.

The idea of the workshop was not only to increase people’s knowledge and make the language of urban planning more accessible, but also to produce concrete contributions to the field of urban planning in Rio de Janeiro over the course of the next few years. “Rio was the city that received the most investment in urban planning, through the mega-events hosted by the city and the big upgrading and transformation projects that happened alongside, yet it continues to suffer one of the most prolonged pauses in urban development and improvements to quality of life. It wasn’t for lack of money, a lack of projects, or planning: this was the project itself. Our alternative urban planning has to be ready when the pressure cooker explodes—because it will explode,” she said. “Until then, another major contribution of this course is to stimulate people to follow public policies, to bring not just planners, but policy “hackers,” who can have more qualified actions when they represent civil society in participatory spaces,” despite our currently living a moment of eroding mechanisms of popular participation on the part of politicians, de Paula concluded. 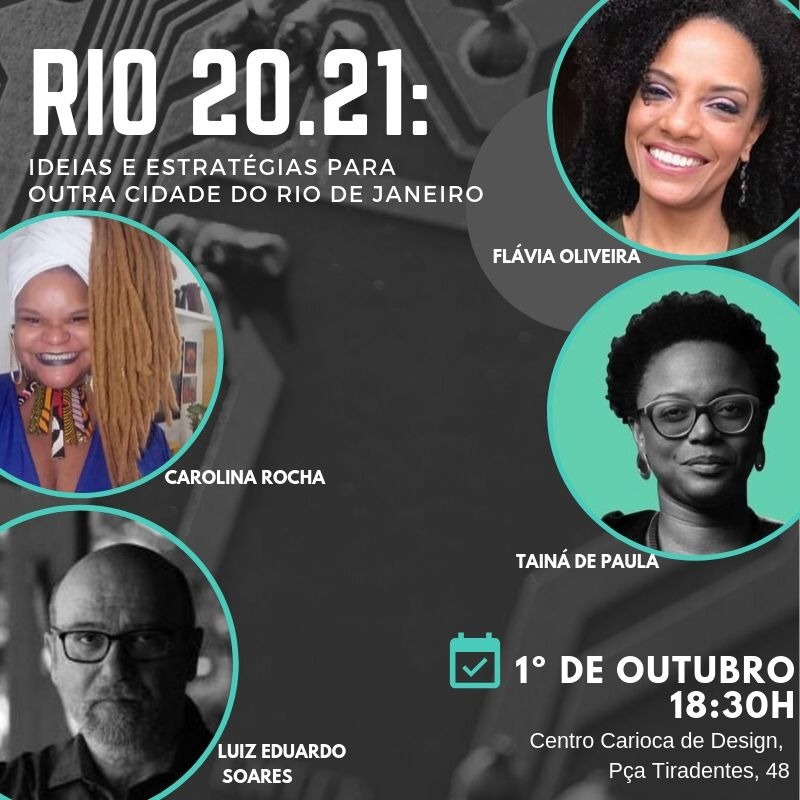 Similar workshops are being planned in different territories across Greater Rio, scheduled to take place every two months. Another initiative called “Network 20.21,” aiming to stimulate thought on the city beyond its election years, launched on October 1 at the Carioca Design Center. The network’s goal is to bring thinkers and activists from urban struggles together to discuss “Ideas and Strategies for Another Rio de Janeiro.”