Challenges to the production of culture in Brazil have imposed themselves more and more in 2019. In only ten months, we have already heard the announcement of theater closings, the risk of the end of the National Film Agency (ANCINE), budget cuts for the Audiovisual Sectoral Fund by the federal government, of the risk of important film festivals not taking place, or even of Carnival losing significant investment for 2020. The creative economy is an important asset for Brazil. Small film productions can directly and indirectly generate thousands of jobs, for example. Furthermore, access to art, leisure, and culture is a right. Even so, there exist cities only a few miles from Brazilian capitals that do not have a single movie theater or cultural space. Such is the reality of Belford Roxo, a city in the Baixada Fluminense area of Rio de Janeiro’s metropolitan region, the most populous city without a movie theater in the nation.

Belford Roxo, as is the case with many other cities in the Baixada, suffers from a lack of many things: a lack of job opportunities, a lack of effective urban mobility, a lack of hospitals, and of course, a lack of film, theater, and public leisure spaces.

In this context, a film-loving group of youth is swimming against the current to make up for some of these deficiencies. They make up the BaixadaCine collective, producing films, exhibiting films at the film club they themselves created, and training aspiring filmmakers.

BaixadaCine was created in 2016 to fill a gap in a city without a single movie theater. Spurred by the desire to watch movies in their city, Sandro Garcia and a friend decided to organize a collective to produce independent films that could be shown in Belford Roxo. Today, BaixadaCine is composed of eight members: Sandro Garcia, 23, Beatriz Rodrigues, 21, Cintia Lima 32, Adrian Monteiro, 42, Vitor Sena, 21, Lorrane Mota, 20, Kalebe Nascimento, 23, and Artur Fontes, 24.

To get access to cinemas, residents of Belford Roxo must travel to neighboring municipalities like Duque de Caxias. But this travel is costly: it takes two to three separate buses just to watch a blockbuster movie at a mall. Brazilian films or those outside the commercial circuit also aren’t an option—non-commercial films are only shown at “street theaters” (cinemas da rua, or independent movie theaters) and currently, in Rio de Janeiro, the only street theaters are located in the city’s South Zone. The “city of love,” as Belford Roxo is sometimes known, once had its street theater too. But as in other municipalities, the space is now home to a Casas Bahia electric appliance franchise.

Beyond the distance, ticket prices end up being a determining factor that keeps many from accessing cultural spaces. A ticket to a street theater ranges from R$30-50 (around US$7.50-12.50 in a country where a month’s minimum wage is about US$250). On weekends, the amount can jump to over R$60 (US$20). All BaixadaCine members share the experience of having faced many obstacles in the process of acquiring the habit of watching films. Without the [financial] conditions to frequent movie theaters, members are only able to watch movies because streaming platforms like Netflix have granted broader access to those unable to pay for this form of leisure.

Sena, for example, only goes to the movies once a year. With no television at home, he watches movies at friends’ houses or at film clubs. “Film has a formula that makes you think and react. It awakens your creativity and makes you want to learn. At school, when I couldn’t understand the material, I would watch a movie and learn that way. When you have access to that, you’ve got yourself an incredible means of thinking and imagining. But the price of transportation holds me back, it keeps me from going to the movies,” he says. 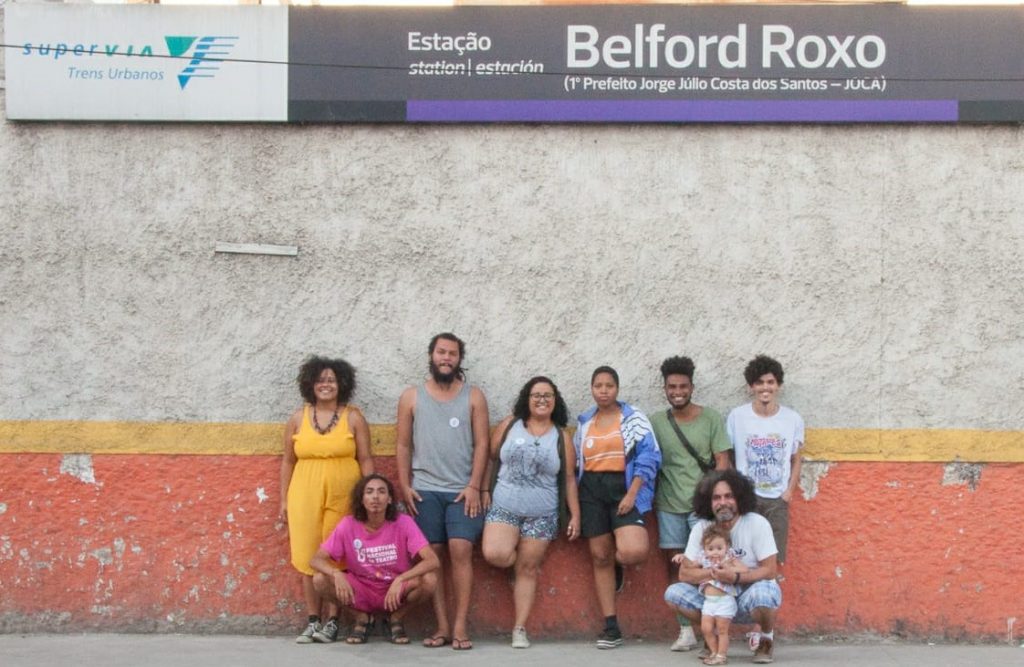 Fontes, in turn, says that this deprivation gave birth to a drive to produce films: “We only watched Hollywood movies. [Later], we got to see film screenings at Sesc [a social service organization] and saw that it was possible to make films, we discovered that we could make them too. It was important to watch national or independent films. The Baixada can make movies too. Sometimes we have incredible ideas and then we adapt them to our reality of little money or structure. Even so, we realized that we would be able to move forward and teach others to do what we do.”

The members of BaixadaCine now face the challenge of ensuring continuity for the collective’s activities. Without permanent financing to guarantee their activities, BaixadaCine applies for small grants. When they receive financial resources, they produce the most they possibly can, understanding that the usual reality is not having any funding at all. “Being able to do things with a low or nonexistent budget is the idea. That was the main message we tried to send at the Periphery Film Workshop we held,” says Rodrigues.

The workshop was part of a project by the collective to train filmmakers from the Baixada, and was held with support from the Casa Fluminense Fund, as part of their Agenda Rio 2030 grants. In partnership with the Donana Cultural Center, the training course ran for four weeks and the 20 students were able to, at the course’s end, create four short clips with their own cell phones. The films Infância (Childhood), Marrento (Showoff), Bica da Mulata (The Mulata’s Spout), and Cinema do Futuro: nossa verdade seja dita (Film of the Future: Our Truth Be Spoken), were all produced around the cultural center with the participation of the space’s users. The final screening gathered some 50 residents from the neighborhood of Piam.

“It was really gratifying to see, on the day of the screening, the mothers of children that participated in the short films produced in the training course. Film is not inclusive. It’s not for everyone. Incentive policies are necessary to bring the general public into the cinema. [Your average people] ‘Dona Maria’ and ‘Seu Zé’ need to be at the screenings,” says Garcia. Alongside the training workshops, BaixadaCine is producing a short film called L.G. BAIXADA.T, with the support of Lab Curta, a public call for films with support from the State Secretariat for Culture and the Light electric utility, intended to encourage low-budget short films and to incentivize the training of the public, placing in circulation new regional cinematographic productions.

BaixadaCine, through its film club, Velho Brejo, shows its own productions, and films from the Vitrine Filmes catalog at public schools, at the campus of the Rio de Janeiro Federal Institute (IFRJ) in Belford Roxo, and at the Donana Cultural Center. Despite being the only film-screening group in the city, the BaixadaCine collective does not have any formally trained filmmakers in the group. These film-loving youth are all running after internships, jobs, or entrance into university. The difficulty of access to opportunities is a major worry for members of the collective. 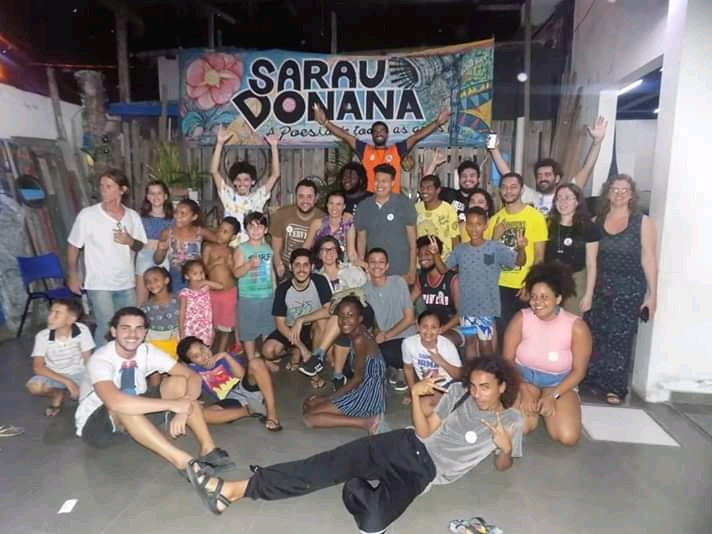 Currently, cultural groups and producers from the Baixada have begun organizing to take on the possibility of expanding opportunities in the region through the arrival of an undergraduate Audiovisual Course for the Rio de Janeiro State University (UERJ) campus in the Baixada, at the Educational School of the Baixada Fluminense (FEBF). The Baixada Fluminense has three million inhabitants but no course in film training. Today, the state of Rio de Janeiro has only two university-level audiovisual courses: one at the Federal Fluminense University (UFF), in the city of Niteroi, and the other at the private Pontifical Catholic University (PUC) in the neighborhood of Gávea, in Rio de Janeiro’s South Zone. Aside from the few options, there exists an open film course at the Darcy Riberio School in Rio de Janeiro’s downtown Centro area, but the high cost of courses keeps youth from the periphery from graduating in this area.

Having access to specific training facilitates and broadens professional opportunities for those interested in working in film. For Rodrigues, it is necessary to change the popular perspective surrounding cultural work, which is consistently seen as a lesser profession and given little value. According to her, prejudice, conservatism, and a lack of access to cultural products rob youth of their ability to dream, and principally so for those of the periphery. “All those who work from Monday to Friday, catching the crowded train, are denied the opportunity to do work that is enjoyable, to access culture and quality study. The majority of Brazilians frequent schools that don’t have teachers. How are they going to have art classes? It is, of course, necessary to encourage people from the periphery to study medicine and technology as well. But when there is no access at all, what’s left is to find a job at the local market and survive. Life can be much greater and better than this, and the only reason we don’t think this way is because they don’t let us dream,” she vents.

In terms of references and what sort of films they would like to produce, Garcia describes how today there is a demand for “guerrilla cinema” produced in the periphery and by people that live in these territories. “Making films in the Baixada is knowing that all the suffering we’re experiencing now won’t end any time soon,” says the young filmmaker. Influenced by a director from the peripheries of Belo Horizonte, Andre Novais of Filmes de Plástico, BaixadaCine wants to democratize the access of people who live in the Baixada to less elitist cultural production, and help the population to identify with these works, making them feel a sense of belonging. The collective also wants to produce works with the representativeness that they didn’t see growing up—after all, film productions always feature the same faces. For the collective, the periphery must produce works on the periphery, breaking with stereotypes.

The stereotypes present in audiovisual production exist not only around the characterization of the periphery, but also serve to reinforce other inequalities, such as race and gender-based inequalities. Rodrigues says that gender is more than a barrier—there are few women in audiovisual production. Among the few that exist, almost none are black. “References are extremely rare. In various moments I feel like what I say isn’t taken seriously. Black women do not have credibility and I work to break this pattern, showing other black girls and women from the periphery that they can be what they want and occupy the jobs that they want and dream about having,” she says.

Asked about where they hope to take the collective, the response is unanimous: to become a reference in audiovisual and cultural production in the Baixada Fluminense. Garcia speaks of the happiness he feels in seeing other collectives in the Baixada, in Nova Iguaçu and in Caxias, that create film clubs. The Mate com Angú group and the Imbariê nos Trilhos film club also hold screenings in cultural spaces, promote debates on film and stimulate the region’s cultural scene. Despite his happiness, Garcia adds a caveat: “We make films, but we need to eat and pay our bills. What we do is work and we need an incentive.” Mota, moved, admits how difficult it is to produce films in Belford Roxo in the midst of so many demands that exist in the Baixada. “The language is different. The Baixada is multifaceted. The Baixada is its own film genre,” she concludes.

Thábara Garcia, is a resident of Magé, a teacher, and a member of the Roda de Mulheres da Baixada collective.