This is the second article in a series of four, based on a study into the disciplinary processes that took place in the lead up to, during, and following mega-events in Rio de Janeiro. The series uses the experiences of the favelas of Babilônia and Chapéu Mangueira, using the theme of discipline as categorical analysis, splitting the theme into three dimensions: physical, economic, and symbolic. This series of articles is based on a scientific paper originally published in the journal CITY in December 2018. Read the full paper here. For part one of this series, click here.

The study references data on Rio de Janeiro public policy as well as interviews undertaken between 2014 and 2019 in Babilônia and Chapéu Mangueira favelas. Names of residents interviewed were not released. Part two, below, analyzes the element of physical discipline.

The physical discipline mentioned here refers to violence in a plurality of manifestations: physical, verbal, and psychological. In the context of an increasingly urban society, these manifestations are deeply linked to the formation of contemporary metropolises and their processes of socio-spatial segregation.

In the case of favelas and peripheries, violence is an intrinsic part of the history of the relationship between State and citizen, whose social status is immersed in the stigma of the myth of marginality¹—that is, the prejudices and stereotyped imagery that is hegemonically spread over marginalized settlements and their residents. In turn, the State and its representatives propagate attempts to mend a fractured city while, paradoxically, using its regulatory arms to exercise control in favelas. Sometimes, this includes evicting residents in the midst of urban policies; at other times, it translates into disciplining them in the context of police/military interventions and policies. 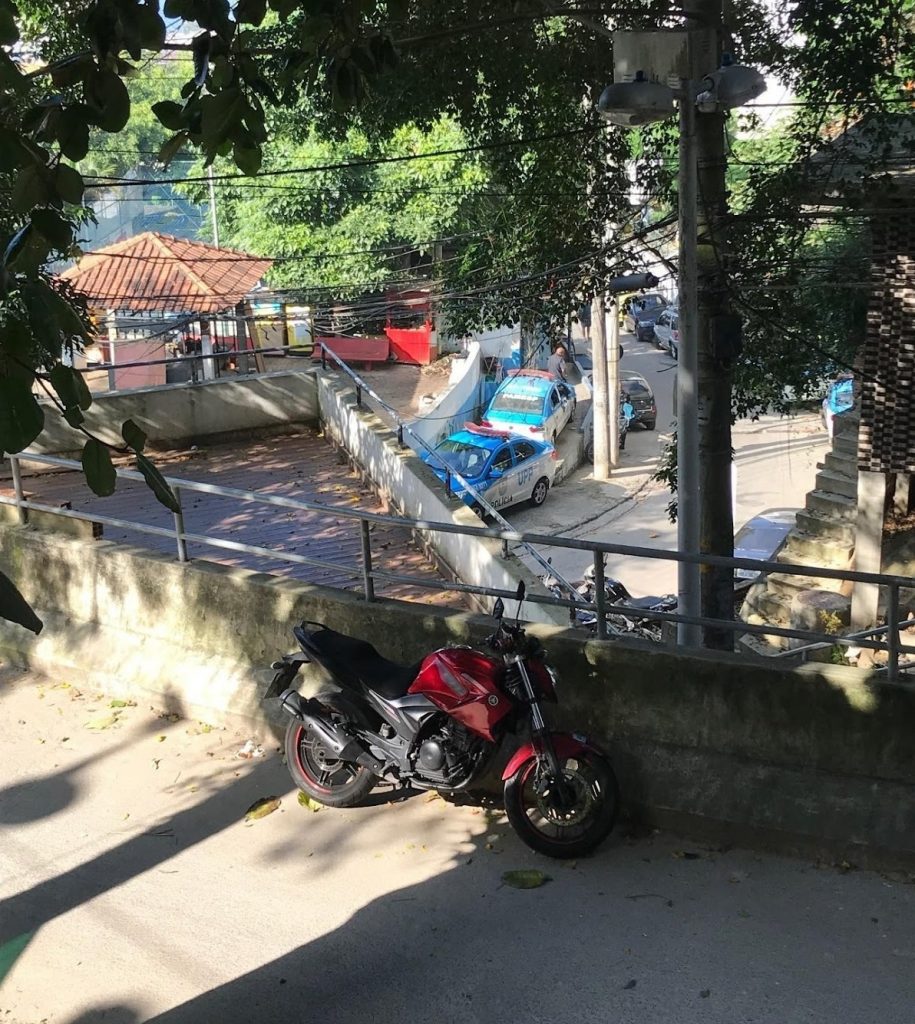 In Rio de Janeiro the relationship between socio-spatial segregation, favelas, crime, and security policies developed intricately throughout the twentieth century. Since the 1950s, a boom in industrialization and urbanization has contributed to the dizzying growth of favelas in Brazil’s Southeast. Not coincidentally, during the 1960s and 1970s, there were also extensive removal-focused favela upgrading projects, exemplified by the urban projects of Governor Carlos Lacerda.

Such policies, however, were unable to contain the growth (in number and density) of the favelas, which, with their narrow streets and alleys, created a new urban and landscape language for Brazilian metropolises. Later, beginning approximately in the 1970s, several criminal factions arose, some of which still dispute these territories. It is noteworthy that, although many of these groups were not properly formed in favelas, it was precisely “in such narrow streets and alleys, abandoned by the State”² that organized crime was able to establish itself.

Thus, between police interventions and operations in Rio de Janeiro, for almost half a century, favelas have been the stage for armed conflicts between different criminal factions and between State agents and such organizations, which, naturally, reverberates in the daily lives of local residents.

It is in this context that, in the late 2000s, the Pacifying Police Unit (UPP) project emerged: an attempt to create a permanent and effective pacification policy for the problem of drug trafficking and crime in the city. In an unprecedented way, the UPPs created a physical arm of the State inside favela territories, which in theory would bring greater security to both favela residents and the population in general.

The UPPs’ presence in the favelas has been controversial and divisive since the beginning. It is also important to note that UPP action has not been homogeneous, varying considerably over the years and depending on the location of the favela in question.

In the South Zone favelas, the focus of this analysis, there is the peculiarity that the police presence was a strong catalyst for tourism and real estate speculation, which inevitably contributed to new sociocultural dynamics in the urban fabric. In this context, the UPP began not only patrolling the streets to curb drug trafficking, but also controlling parties, organizations, and public events in some favelas. A traditional example cited by residents is the ban on baile funk parties in many favelas with UPP stations, which will be covered in more detail in part four of this series.

Regarding physical discipline and the multidimensional forms of violence, although many residents still report feeling safer with the police presence, reports of abuse and aggression by UPP agents towards residents are also alarming and show the ambiguity of such disciplinary presence.

“The UPP has softened crime issues. Not everything is under control, but it has helped people [from outside the favela] to feel safe getting to know those who live here. It opened a big door.” – Male, 31, merchant, 2015

“One of the big lies about the UPP Project is that it would make it impossible for drug sales and drug traffickers to survive here. Because there are no [major drug] traffickers here. [Real] ‘traffickers’ are those who sell drugs on a large scale. And there are no ‘traffickers’ here.” – Male, 40, local activist, 2015

The case of the Babilônia and Chapéu Mangueira favelas is special in this sense, as both residents and UPP officials themselves claim that the site is historically safer compared to other favelas in Rio de Janeiro. Some residents speculate that this is partly due to the very urban configuration of these favelas: they are less dense and less conducive to hiding in alleys.

Also due to the history of social cohesion and relative peace, many residents question whether the UPP’s actions do not reinforce favela stigmas (instead of helping to break them) and, consequently, stimulate processes of segregation. Residents report being treated “rudely” and “like dogs” by UPP officials, while middle-class tourists and visitors are treated with warmth and kindness. Officers, when interviewed during mega-events, reported making no such distinction. 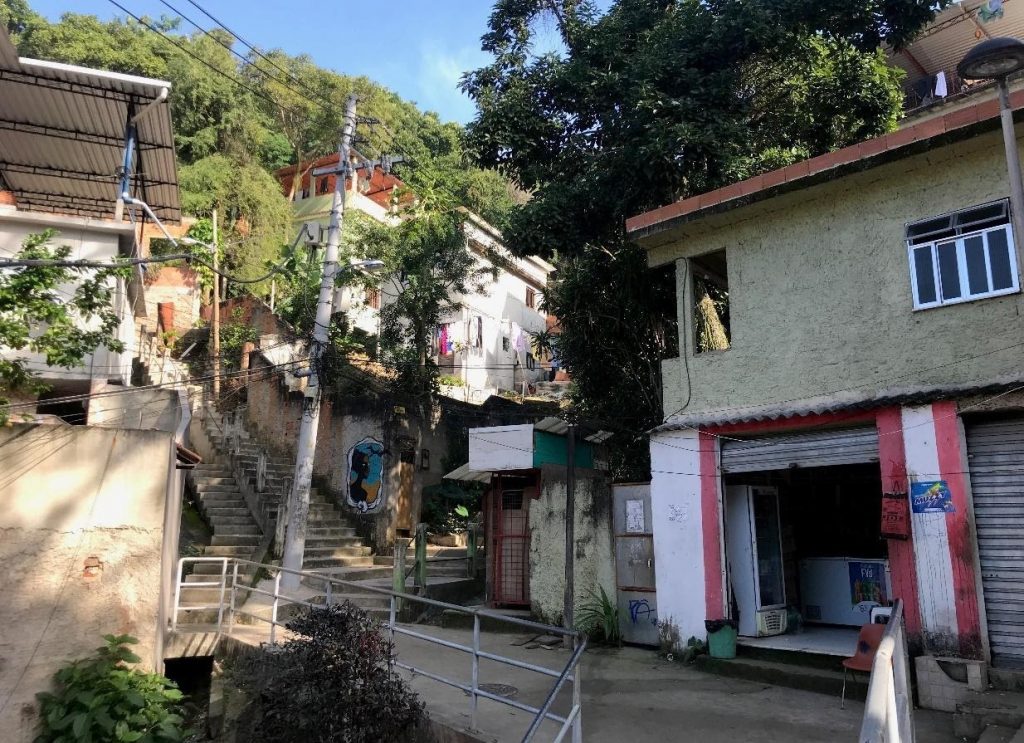 “When I was born it was no longer dangerous here, but when my mother arrived in the community it was very bad. People were killed in front of anyone…. What I witnessed most was wars between the ‘hill owners’ [drug bosses], shooting. I was inside my house and it started.” – Woman, 20, student, 2015

“When you’re walking down the street here, you’re approached [by the UPP] in a way that, it’s like you’re a dog, you know? Not all of them, but it happens. It’s their way of approaching you, it’s aggressive. No one is crazy about being treated with aggression and keeping quiet. So, they disrespect you first, but then if you talk back, you’re arrested. You work, get up early, you do everything you can to provide for your family, and then you have to deal with this!?” – Woman, 35, works with construction, 2015

“For me, the police have a different job here. They want to do work that is not for them to do. For me, the Pacification Police is security-related, and that’s one thing we’ve had no problems with. Even before the UPP, it was safe to walk here.” – Woman, 30, self-employed, 2016

Today, even the most optimistic views have changed. Residents who once praised the police presence nowadays consider the negative face of their presence, and even talk about a “bankruptcy” of this public policy. In recent years, the climate in Babilônia has become even tenser in general due to confrontations between rival drug factions in 2018. In this context, UPP officials, once sympathetic and open to interviews, now decline to discuss the issue.

In addition to ongoing complaints of abuse by authorities along with physical and verbal aggression, even the alleged protection of residents by the UPP seems to have failed. In June 2019, a local tour guide reported, for example, that armed traffickers returned to patrol the forest along Babilônia’s hill, largely through collusion with the police themselves.

In sum, it can be concluded that residents’ perceptions of State presence and violence tend to be hybrid, precisely because the reality is complex. In addition, we suggest that physical discipline remains one of the major issues reinforced by public policies, as in many cases they make the stereotypes of violence and myths of marginalization that residents face even more evident. After all, for most locals, these favelas are not just places of chaos and violence; they are also places of great social cohesion and solidarity.

And as for the perpetuating agents of discipline and violence, some residents do not seem to see State representatives and “hill owners” as opposing forces; they are only sovereignties and regulatory forces in the territory:

“Often, and almost always, the same police van carrying the lifeless black body is the same one bringing drugs and weapons into the favela. You ‘seize’ drugs in a TCP [drug faction] favela and resell it to the rival Red Command [another faction] favela. So, there is no sale of narcotics anywhere in Rio de Janeiro without the collusion of the institution of the Military Police, which is the armed branch of the State.” – Male, 40, local activist, 2019

In our next article, about economic discipline, we will address real estate pressures on favela land and an “embryonic gentrification” that peaked during the mega-events in Rio.

Eric Chu is a lecturer in Planning and Human Geography at the School of Geography, Earth and Environmental Sciences at the University of Birmingham.

Isabelle Anguelovski is founder and director of the Barcelona Lab for Urban Environmental Justice and Sustainability. She is a Research and Advanced Studies (ICREA) professor at the Autonomous University of Barcelona, at the Institute of Environmental Science and Technology (ICTA), and at the Hospital del Mar Medical Research Institute (IMIM).

This is the second article in a series of four, based on a study into the disciplinary processes that took place in the lead up to, during, and following mega-events in Rio de Janeiro. For part one, click here.