Last week, citizens packed the Clube dos Portugueses in West Zone neighborhood Taquara for the public meeting presenting the TransOlímpica highway and Bus Rapid Transit (BRT) project which will connect Barra da Tijuca and the Olympic Park with other West Zone neighborhood Deodoro where other Olympic events will take place. The R$1.5 billion project will run 26km through nine neighborhoods. Under current plans, the TransOlímpica will run through the community of Vila Autódromo, where residents have been resisting eviction under different premises for twenty years.

The public consultation meeting – Audiência Pública in Portuguese – is a legal requirement for the administration of government projects and is the main opportunity for public participation. The requirement for public meetings was made law thanks to pressure from social movements in the 1980s following the military dictatorship and the main characteristics should be orality and effective debate, in particular when collective rights are at stake.

There was a notable presence of Muncipal Guards and Military Police in the area surrounding the Clube dos Portugueses last Monday. On entering, residents were greeted at a reception table where they received a slip of paper to write down questions and queries and hand in to the desk. Questions would only be submitted orally by microphone by those that had signed up previously. This gave rise to several complaints and shouts of discontent. In her blog post on the meeting Mariana Bruce wrote “How can you put into a half paragraph a question that takes account of all the anguishes the residents of Vila Autódromo are going through, for example? A small, dry piece of paper can never reveal this.” This process also complicates participation for less literate citizens.

The meeting, scheduled from 7-9pm, actually lasted four and half hours. On the panel were representatives from the State Environment Institute (INEA), engineer from the Municipal Secretariat of Works Eduardo Fagundes, and geographer and executive director of MRS Ambiental Alexandre Nunes da Ros (the company responsible for technical impact studies). Fagundes introduced the project with a video presentation in which the route follows the original tract and does not pass over Vila Autódromo. Alexandre Nunes followed presenting some of the findings from the environmental impact reports. In her Facebook post on the meeting, resident Denise Silveira wrote “Much data wasn’t considered and he affirmed many times, to justify the project, that the work would be carried out in an area already occupied by human activity. I ask myself, where does all the diversity of the Pedra Branca State Park, a well preserved area of native Atlantic rainforest, and the Tijuca National Park go in this study?”

Almost two hours into the meeting, the panel finally opened up to the floor. As required by law, representatives from the Public Prosecutor’s Office were in attendance with prosecutor Leonardo pointing out that the panel wasn’t formed of the correct representatives and that the people’s voice needed to be heard. He also delivered the Office’s technical report highlighting flaws in MRS’s environmental impact study. Councilman Eliomar Coelho and his team also made technical criticisms of the project and demanded that community groups and social movements be allowed to vocally express their concerns.

Indeed the subject of evictions was raised many times with concerns that real estate speculation was behind evictions. Many asserted that they wouldn’t leave their houses and that the City is violent during evictions, often not giving people the necessary notice period. The official’s response was that he didn’t know the extent of the evictions at that point but would inform when they occur. 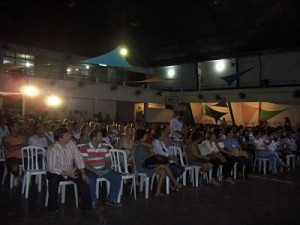 All those in attendance – which included residents from Vila Autódromo, the Commission of Those Affected by the TransOeste, and the West Zone II Political Action Commitee – were given a City authorities flyer with advice on dispossessions. The official literature is encouraging, peppered with phrases such as “we want you to be the first to know about the changes that will occur in your life,” “the City authorities try as much as possible to keep properties intact,” “it’s very important that the proprietor makes his wishes known as dialogue helps the process,” and “your participation is very important!” However the actual practice of evictions since 2010 tells a different story.

Many left Monday’s public meeting frustrated. Concluding her account of the event, Mariana Bruce writes: “At the end of the day, what is an Audiência Pública for? Without disregarding the fundamental space it occupies in our society, as a space of mediation between the State and society, the room for manouvre is incredibly limited. As such, there is an inherent contradiction: as a space won by us, it is our right and obligation to dispute the projects of the city and of the rights there and everywhere that are opened up. On the other hand, participating ends up supporting an institution that’s supposed to be democratic but is highly verticalized, bureaucratic and elitist and that, ultimately, doesn’t serve the population but instead supports the arbitrariness coming from above.”