This article from Vila Nova Jaguaré is the tenth and final in a series about the impact of the coronavirus pandemic on daily life in the favelas. The series is made possible through a partnership with the Behner Stiefel Center for Brazilian Studies at San Diego State University.

Vila Nova Jaguaré is one of the largest favelas in the city of São Paulo in terms of its geographic extension, and is located in the district of Jaguaré, one of the first planned neighborhoods in the West Zone of São Paulo’s capital city. The neighborhood was designed in the 1930s to house the Jaguaré Industrial Center, one of the city’s main industrial centers in the 1970s.

Due to the high demand for housing, an area reserved for a 160,000m² public park in the neighborhood began to be occupied in the 1960s and 1970s, forming the Jaguaré favela, which today is known as Vila Nova Jaguaré. The favela currently has 12,000 inhabitants and preserves a history of intense popular struggle for the right to the city and to housing. It was only in the 2000s that the favela was formally recognized by the public authorities.

My name is Thuane Ainy Campos Barretto and my history with Vila Nova Jaguaré is one of constant “coming and going.” I lived in the neighborhood for over 10 years. The last time I moved away was in 2013, but my uncles and grandparents still live there. I visit the community every day because I work as an actress and cultural activity supervisor at Projeto PALCO, a community-based initiative.

They say the pandemic is democratic, but honestly, I don’t understand where that viewpoint is coming from. What Costa told me over a phone interview reveals a different perspective: “How are we supposed to protect ourselves? Social distancing with two bedrooms for four, six, eight people? With no money to buy milk, let alone hand sanitizer and soap to stay clean! The only protection for most residents here is faith in God. There is anxiety among the residents about their future. Many have nothing to eat.”

Costa, who owns the Flor de Mandacaru buffet restaurant in Jaguaré, also shared her impressions on the impact of the pandemic on businesses and residents in the neighborhood. “Businesses have ground to a halt. Many generate jobs for the community’s residents, jobs that pay their rent, and it’s unclear how all of this will play out with the increased unemployment. This is why it’s important to stimulate the local economy so that these business owners don’t go bankrupt. You can see the desperation in their faces, as they’re all suffering from a drop in sales. It’s a delicate time for everyone.”

Social inequality is therefore evident in her account. The inequality in the conditions for rent, housing, and food means Covid-19 is not a democratic disease. “There’s already no money to buy essential goods! Food is no longer reaching the table. Food consumption with the entire family at home all day is much higher. Moms are no longer working; dads look away despondently and see no opportunities; children ask for snacks when there are none. It’s sad. There are no expectations for when the food situation will normalize, and also no expectations for when this will all end,” reports Costa.

“There are people campaigning to collect food for socially vulnerable families. This doesn’t fix it, but it does help address the situation. Residents are going after the [Emergency Assistance] promised by the government. This will help alleviate the burden of this quarantine period. People are standing together like never before and paying attention to what’s happening with those around them. The feeling that everyone is in the same boat has increased everyone’s will to help others and share what they have with those who have nothing,” she concludes. 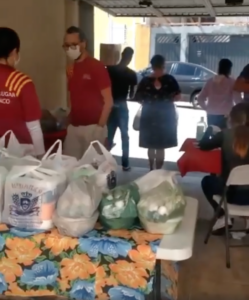 The Mobiliza Jaguaré movement has taken shape to respond to the emergency, a partnership between Flor de Mandacaru and Projeto PALCO. Together, they are promoting a campaign to raise money for different initiatives in the neighborhood, such as putting together basic food baskets, which are purchased at local supermarkets and delivered to the most vulnerable families. Within 15 days, the movement raised R$17,765 (US$3,015) with 137 beneficiary families, and another 40 families which will soon benefit from these funds. Seven local businesses also benefitted from this drive, and 29 volunteers were involved with the project. The campaign is still on-going, with 142 families on the waitlist.

When interviewed, Rodrigues told me she keeps a journal on day-to-day life during the pandemic, so I invited her to co-author this piece with me and incorporate her first-person entries.

Rodrigues’ writings not only log everyday activities, but also the challenges faced in living with the pandemic as an independent worker and an artist in the favela:

I’m not a mother, or a grandmother, or anyone’s aunt, but I am a sister, I’m a daughter, I’m a person. I’m not rich, I have no fixed salary. I’m an independent worker and I’m an artist. I don’t pay rent, but I pay water, power, and gas bills. Life is much more difficult for someone living on the periphery, even more so for an artist. Me, stay at home? I’ll stay, fearful of something that’s invisible. When I sneeze, I don’t know if it’s Covid-19 or a dusty room. There’s no way of knowing. I know nothing.

I create my art during this quarantine and I share it, without charging anything. I can’t leave for rehearsals, I can’t leave to work on arranging costumes, I can’t leave just to get some inspiration. Everything I do has to be from here at home. There is a lot of poetry here, because I’m an artist. This brings me some respite, but also I fall into despair. I notice the water for the coffee boiling and run to switch off the gas, to avoid wasting it. I don’t know how long this nightmare will last. I don’t know how I’ll be able to remain calm. I’m not a mother, I’m not a grandmother, I’m not an aunt, but you can be sure I bear their same uncertainties.

I listen to the children screaming all day, and the dogs barking all day. I don’t see much because I’m following the WHO’s guidance to shelter at home. Few people from the peripheries stay at home. I stay because there’s nothing else for me to do. There’s nowhere to work. I need the money, but I also need my health. The choice the peripheries face: get even poorer but stay healthy, or remain poor and get sick? I chose to become even poorer and stay healthy so that when this is all over, I’ll be able to keep hustling again and again.

I went to the market yesterday. It was the third time I left the house since March 16, when I worked for the last time and noticed the churro stand still operating, the bar still open, Dona Neti’s produce stand open, the market open. And at the check-out counters there was glass between the customers and the employees, like they have at the banks. The elderly, who sit all day on the sidewalk near the market, were no longer there. The people who were on the street were examining each other as if looking for signs of Covid-19, but I found myself doing the same.

During the week, everything is quieter. On weekends, we hear a medley of sounds. That hasn’t changed! Weekends are when we listen to music in the favelas, cranked up really loud. It’s as if we’ve tired of listening to our own thoughts, our uncertainties, and turn on the music. I didn’t used to do that, but now I do. I turn on my little radio and listen to music while tidying up my room.

I watch people on TV protesting [the government] by banging pots and pans at their windows. I think it’s great that the people are raising their voices, but do you think I can bang pots? Who will fix them? We know this is ineffective! Just stop! You’ll tell me I’m cynical, that I’ve lost my faith? I’m just sharing my views. I can’t bang pots or ruin my bean ladle! I need to make food. Food is more important than ruining my pans for a guy who comes out and says that “Unfortunately, some people are going to die.” My protest is different, and it’s all I can do right now: I stay home, I keep my house clean, I survive this, and I go back to work. There are days when I wake up positive, there are others when I wake up in a rage. But does getting enraged accomplish anything? No one sees the rage, the desperation, the agony, the uncertainty here in the peripheries. From their side, all they see is bricks and roofs, open gutters. They don’t see people, they just see a place and that’s the end of it.”

Thuane Ainy Campos Barretto is an actress and playwright with the theater company TÔ EM OUTRA! Cia. de Teatro, which she founded with friends in 2012. She’s a psychologist who graduated in 2019 from Universidade Paulista and has worked at Projeto PALCO in Jaguaré since early 2020 as an activity supervisor.

Andreza Rodrigues is an actress and playwright. She is a resident of the Vila Nova Jaguaré favela who began her artistic career at the theater company Cia. de Teatro Vizinho Legal in 2008 (currently Cia. PALCO). She’s also a founder of the theater company TÔ EM OUTRA! Cia. de Teatro, where she wrote “Das ruas um Orfeu de mochila” and “Um tempo para o infinito.” Rodrigues holds a Bachelor’s in Photography from Universidade Paulista.