This is our latest article on Covid-19 and its impacts on the favelas. For the original article in Portuguese by Lucas Altino published in O Globo, click here.

On July 1, the municipality of Rio de Janeiro reached 6,618 confirmed deaths due to the new coronavirus. Considering a population of 6.32 million, this means the capital had 1,047 deaths per one million inhabitants. This proportion of deaths is much higher than that of countries that suffered gravely from the pandemic, such as the United Kingdom (647), Spain (607), and Italy (575). If it were a country, Rio would only place behind the republic of San Marino, in Europe, which has the world’s worst death rate per inhabitant. The difference, however, is that the tiny nation, an enclave in Italy, has a mere 33,000 residents.

Another figure that makes the state of Rio de Janeiro stand out negatively is coronavirus fatalities in relation to confirmed cases, which is currently at 8.75%, the highest in the nation. These rates were published in the most recent report from the Fluminense Covid-19 Observatory, which brings together researchers from the State University of Rio de Janeiro (UERJ), the Federal University of Rio de Janeiro (UFRJ), and the Oswaldo Cruz Foundation (Fiocruz). According to specialists, the lack of testing and underreporting of cases ends up increasing Rio’s case fatality rate, while gaps in medical assistance for the population help explain the high mortality.

“Our mortality per one million people is above 1,000 (1,047 as per the July 1 bulletin). This shows that the epidemic here is severe. If Rio were a country, it would only be behind San Marino, which isn’t even a good parameter because it only has 33,000 inhabitants,” says Americo Cunha, a UERJ applied mathematics professor and member of the Observatory. “Mortality measures the seriousness of the epidemic and ours is very high. Then the gaps in services, assistance and a general undersizing of the health system come in.” 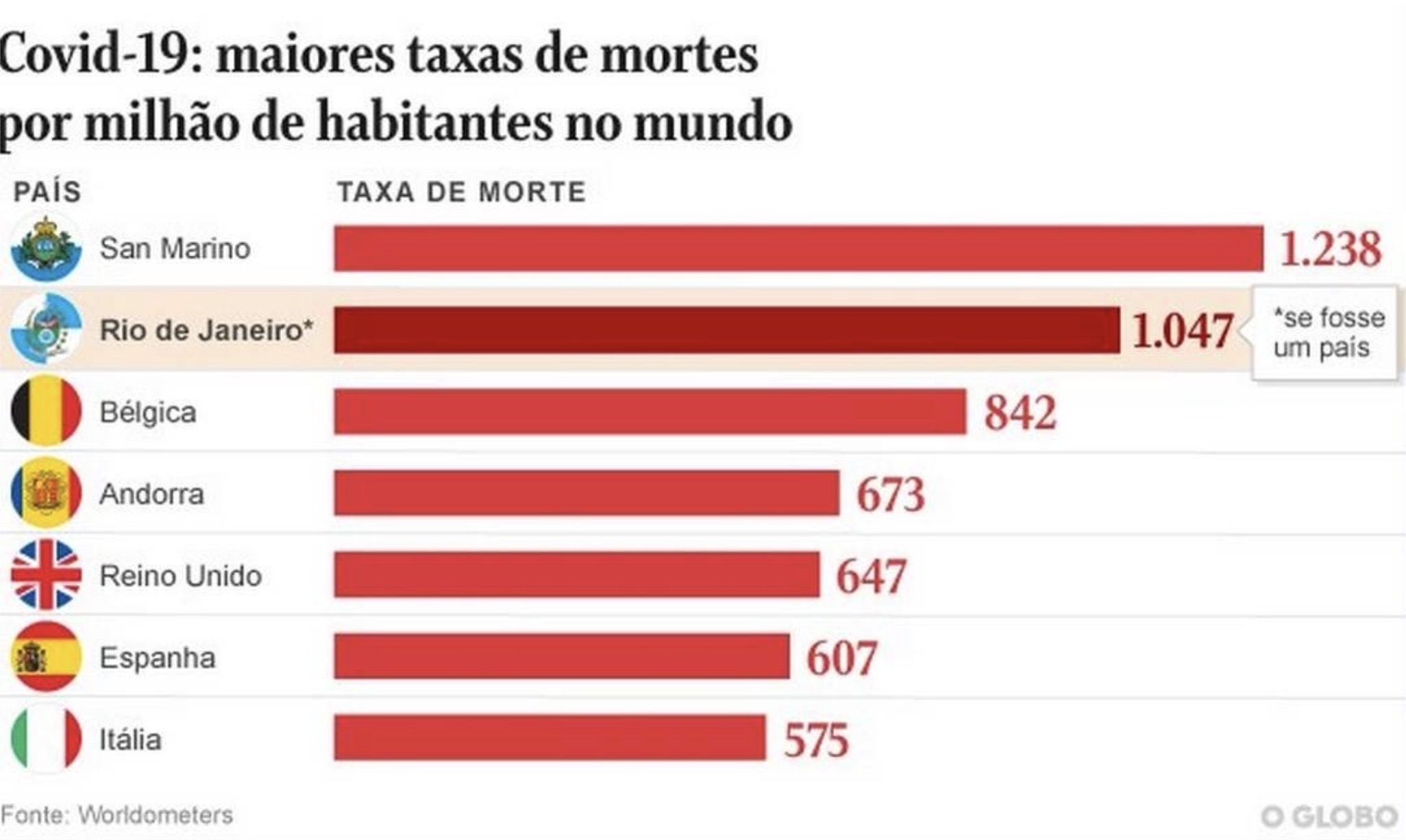 Criticism of the Reopening of Rio’s Economy

The Observatory did not make mortality comparisons between all of the cities in the country but, according to a cold statistical count, it is likely that Rio is not the leader due to the many municipalities with very small populations. Still, its rate is much higher than, for example, that of Manaus, which has 830.4 deaths per one million inhabitants and which suffered one of the country’s worst health system collapses during the pandemic.

“This helps us gain a view of how serious the situation in Rio is,” says Cunha, who criticizes the reopening of Rio’s economy, [which allowed] bars and restaurants allowed to return to functioning on Thursday, July 2. “In Germany, for instance, commerce reopened in May, after the curve began to drop in March. The reopening in Rio is very hasty. The risk is of increasing contagion. It is safe to say that deaths will occur as a result of this. We did have a decline, but the level of deaths is still very high.”

According to the professor, the drop in bed occupancy rates in hospitals, which has been a factor the city government considered when determining whether to reopen commerce, is important but cannot be the only statistic taken into account. In addition to mortality, Rio has the highest case fatality rate among the Brazilian states, since 8.75% of all confirmed cases have become deaths. For the sake of comparison, the national average is 4.3%.

“In these statistics, the problem is high underreporting. The most recent information we had was that Rio only tested more than Minas, a state where the curve of the epidemic is at another stage, still in acceleration. São Paulo, for instance, tests a lot more than Rio and has a case fatality rate of 5%. Since the total number of cases is underreported, the case fatality rate goes up,” explains Cunha. 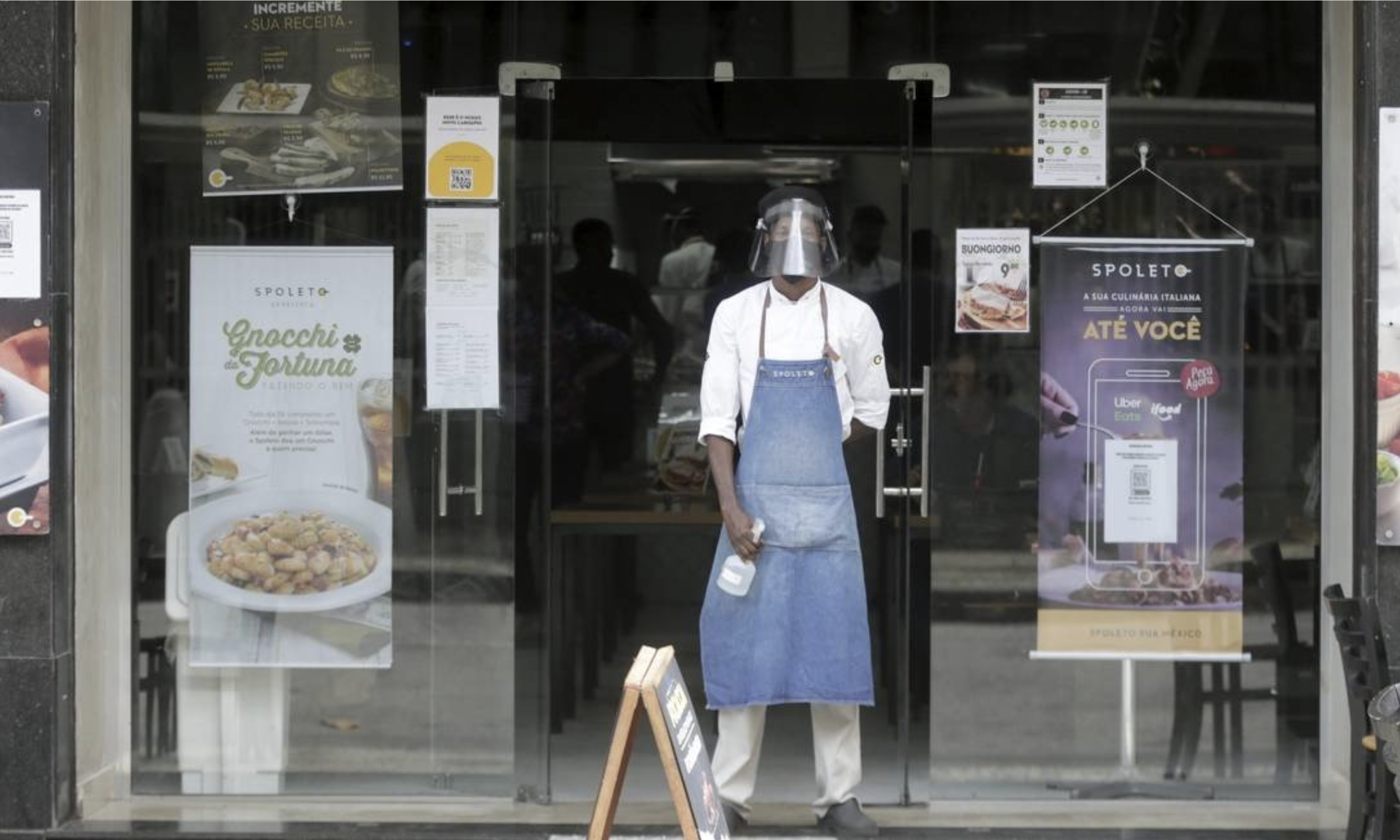 The Rio Doctors’ Union did a survey of the highest case fatality rates per municipality in the state. Mesquita is in the lead, with 14.4%. Almost the entire metropolitan region has rates above 10% and Rio de Janeiro proper, placing sixth, has a rate of 11.50%. This figure, as well as high mortality, can be explained by faults in the health system, according to Dr. Carlos Vasconcellos, the union’s director.

“During the peak, in May, many people did not have access, in some cases because there weren’t enough hospital beds available. In the case of the Baixada Fluminense, the problem persists, with a large population and scarce services. Looking at the statistics, we can see that poor municipalities have high case fatality rates. Besides underreporting, there is little equipment available. In the capital, the network of assistance was dismantled, and many people do not see a doctor.”

Highest case fatality rates in the state of Rio:

Widespread underreporting motivated a project spearheaded by researchers from UERJ, UFRJ and Fiocruz under the coordination of the State Secretary of Science and Technology. Karla Figueiredo, a group member from UERJ’s Institute of Mathematics, explains that the goal is to identify the regions in Rio to which testing should be directed. The form about symptoms can be answered by patients online.

“We still do not have the clarity to affirm if we are in a second wave, or still the first. We need real-time notification to be able to adjust the model,” says Figueiredo. 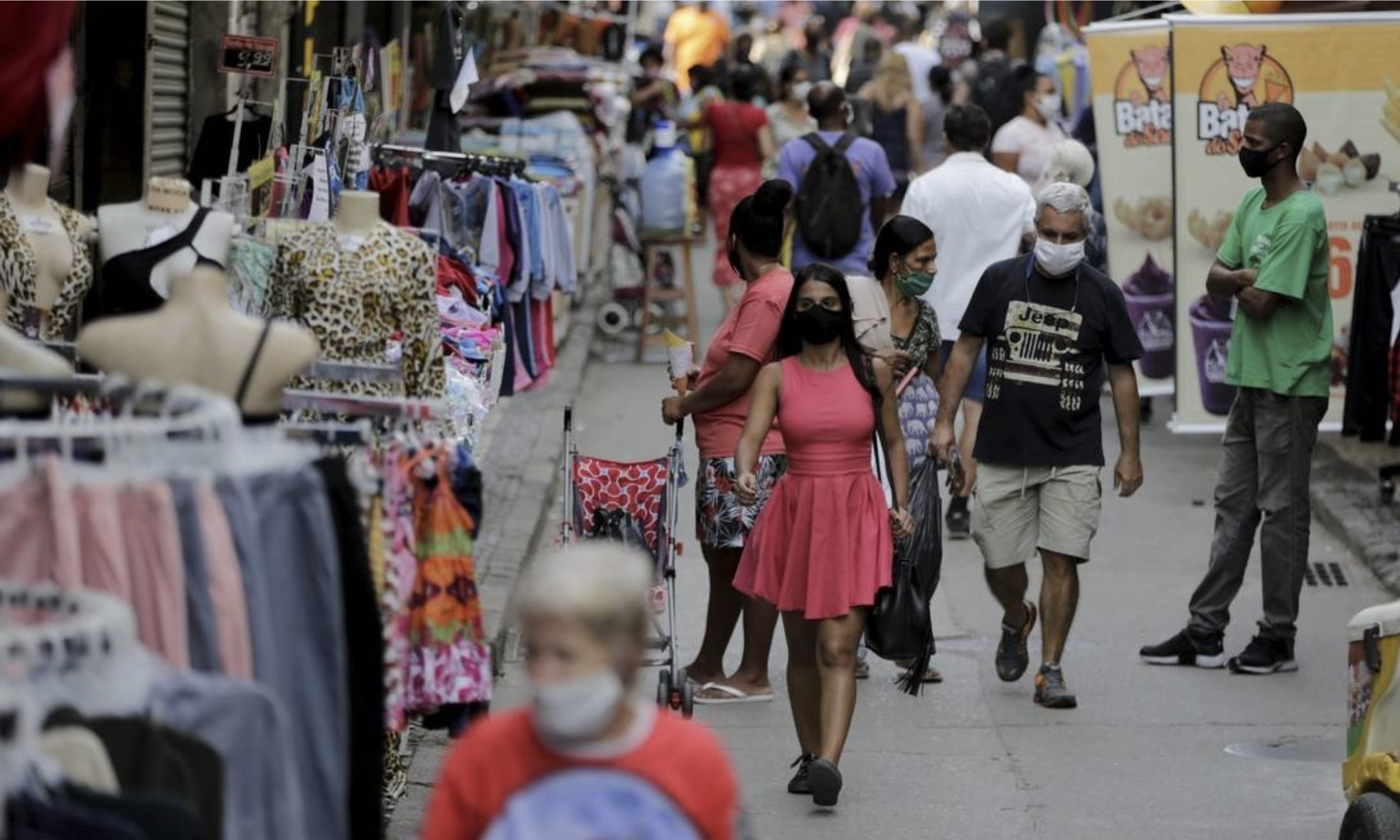 For Ligia Bahia, a UFRJ public health researcher, the Rio context, with these rates, is sufficient to signal that the moment is favorable for economic reopening.

“This reopening is absurd. I believe that Covid is very happy, celebrating, able to stroll freely among the population,” says the expert, pointing out that other states also test little. “Brazil in general tests little, so in Rio we might say that there has been a stronger contagion, in part due to the policy of flexibilizing commerce.”

In UFRJ infectologist Celso Ramos’s opinion, the resumption of more activities will likely lead to an increase in cases.

“The return is a little early. The sensation is that we are only now beginning to see a drop in the curve, but still far from a safe level. Because of this, it would be more prudent to wait. It is almost inevitable to think that the rate of contagion will increase in the next few days, and we don’t have the population sufficiently immunized.”

For physician and UERJ professor Mario Dal Poz, the most critical problem with economic reopening is public transportation.

“That is our Achilles heel. We see that the population is crammed in buses, trains, and subways like sardines in a can. No mask can solve that problem. At the same time, we do not have sufficient tests,” explains the doctor, who laments the decrease in the state’s Scientific Committee meetings. “The government no longer summons the committee, and, in City Hall, the group is almost clandestine, since we don’t know who belongs to it. Everything we need right now is transparency.” 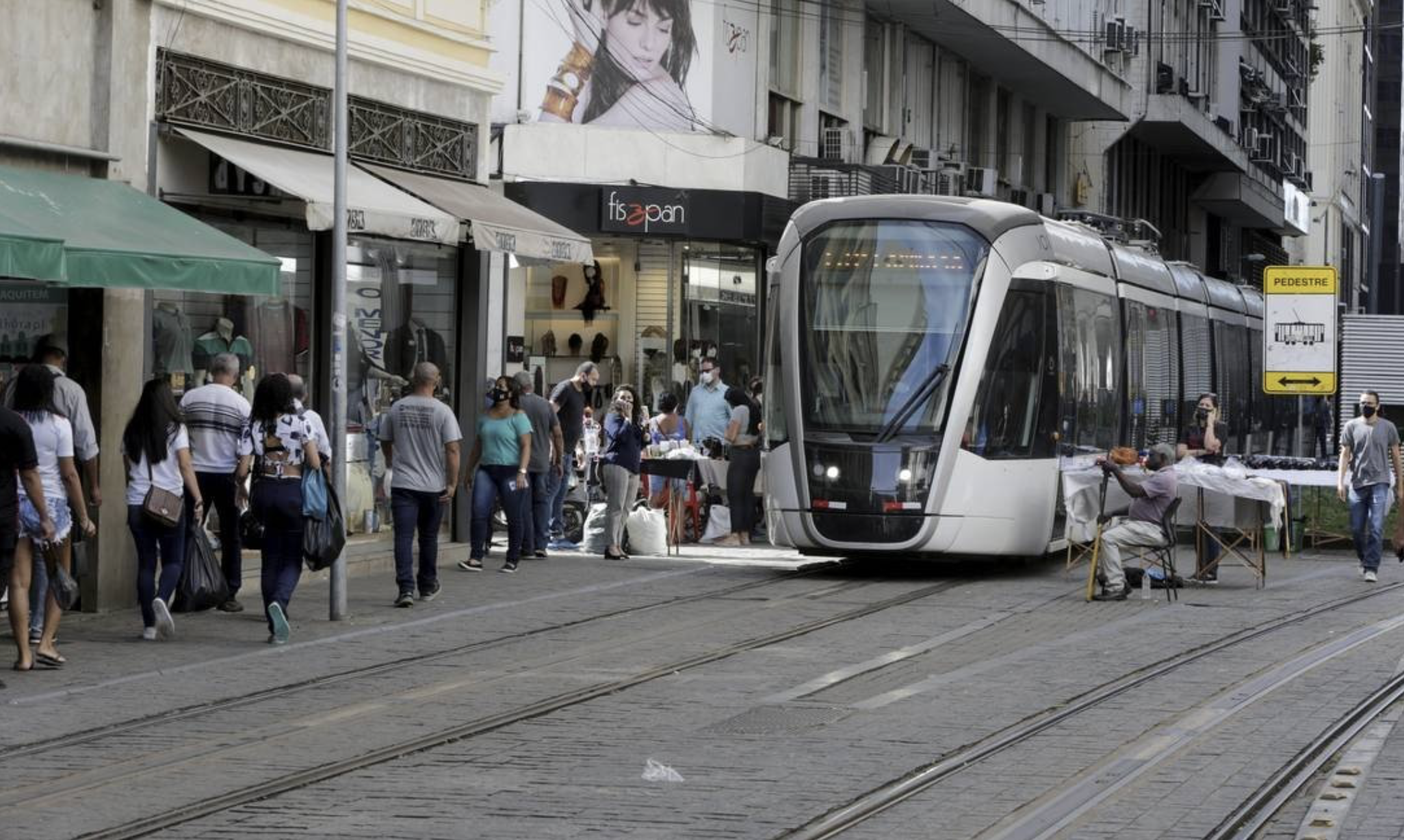 When asked to comment, the State Secretary of Health confirmed that low testing is one of the reasons behind the high case fatality rate. The department says it will expand access to rapid tests and notified the 92 municipalities that had been requesting the amount needed for each city. So far, 573,040 rapid tests, received from the Ministry of Health, have been distributed in the state, and the secretariat has purchased another 150,000. Another 58,000 PCR tests were done at the state’s Central Laboratory, which can currently analyze 3,000 samples per day.

The Municipal Secretary of Health (SMS) said in a statement that the case fatality rate is directly linked to the number of confirmed Covid-19 cases. “Once the test results are released, there is a larger number of positives, because, until this point, the cases are classified as suspected. Currently, SMS has the testing capacity to carry out 162,000 rapid tests. Besides these, an average of 8,500 molecular (PCR) tests are also being conducted per month.”

The secretariat also informed that on July 1, it started the second stage of testing in a partnership with the Brazilian Institute of Public Opinion and Statistics and residents of the communities of Complexo da Maré, Rocinha, City of God, and Rio das Pedras, in addition to Campo Grande and Realengo. According to the statement, fieldwork is done by teams of government primary healthcare workers based in these regions. “In all, 6,400 residents of these areas should be tested. In addition to this, the city government also promoted testing for taxi drivers in a partnership with the app Taxi.Rio. SMS will furthermore test public and private schoolteachers, public school food servers, people with underlying medical conditions, and the prison population.”