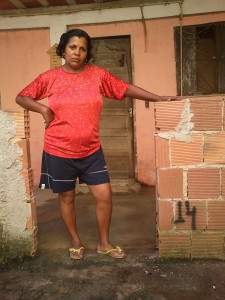 “Money! Money! Your house!”-That’s how Vilma Cristina Ribeiro, 43 and a lifelong Vidigal resident, says foreign investors approach her as they come into Carlos Duque Street, located in the upper part of Vidigal, trying to acquire properties. The houses are in a prime location, not only with easy access to the main street, but with a breathtaking view of the beach of São Conrado. Her answer comes swiftly: “We say no.” She explains, “I do not want to lose my house to the City, why would I lose it to these gringos?”

What these interested visitors don’t know is that Carlos Duque is a street about to disappear because, according to City Hall, it is in a risky area that cannot be contained, and will be removed soon. Access has been prohibited since 2003, but only recently were the houses numbered, and the only reason they haven’t been demolished yet is because of a court order. Curiously enough, with pacification the risk of a collapse appears to have become imminent.

According to locals, the main interest is to remove them to start building a tourist road, which would include hotel developments. “Since it is to remove us, why not also remove the condominium that runs the same risk?” asks Vilma, referring to the luxury condominium Ladeira das Yucas, which is further below near the sea and in line of a possible collapse.

The Residents Association of Vila Vidigal (AMVV) also fears the area is being taken for a hotel, and thus requested a report from an independent engineer. The result was the opposite of that of City Hall. To engineer Maurício Campos, who examined the grounds, containment is not only feasible but also cheaper than removal. According to his calculation, the cost of compensation would be at least R$25,000 reais per unit, totaling a million reais, while containment work would total R$900,000. 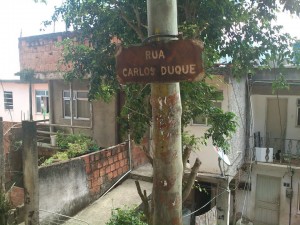 Neither residents nor the AMVV or the engineer deny that the houses are at some risk. Seven of them are compromised, only two seriously. They disagree, however, on various points. The City did not allow residents or the independent engineer access to the report determining that the area is condemned. Now, the Public Defenders Office has had to submit an access request. The residents and engineer question the need to remove all the houses when only a few are truly at risk. Why were they not considered at risk, removed and compensated like the hundred nearby in 1996? Why not provide containment works rather than demolish everything? And especially, why is the city so intent on building a protective wall at the back of the luxury hotel being built in Arvrão, by architect Hélio Pellegrino, and thus permit that construction which had previously been reportedly threatened?

The R$25,000 compensation value, which is not enough to purchase even a room in Vidigal today, would not come in cash. According to an announcement from City Hall, there will be no compensation. They will receive housing units, probably in distant neighborhoods that are not only far from Vidigal, but also from the professional and personal lives residents have built in Rio’s South Zone. But not everyone knows this, because, as residents have denounced, visits from public officials are always during business hours, during the week, when nobody’s home. 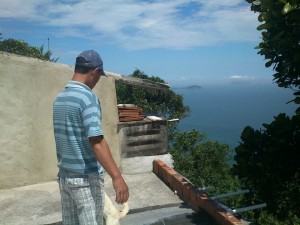 The residences of Carlos Duque Street are far from being shacks. They are simple but reinforced with great effort, often by their owners. This is the case of Seu Feliciano, a construction worker, who made a point of inviting me into his home. He showed me all the rooms which he renovated himself. In the yard, the house limits are three meters away from the concrete frame that outlines risk areas on the hill. “Help us, please!” he pleads to the reporter. The same request was heard from several residents.

Realizing an environmentally sustainable project, but one that cannot say the same of its social impact, architect Hélio Pellegrino says that Mayor Eduardo Paes spoke to him of his intention to change the zoning laws in the favela in order to allow hotel builders more space than the houses. The justification is that these establishments bring development to the area.

When Hélio was informed that some residents found the special treatment towards the hotel business strange, he stressed that the work was not for him but rather for “everyone in the region.” But, in his opinion, the city should not allow the favela residents to remain in the houses within the risk zone as they would not if it were to happen near his luxury condo in Gávea. He says: “All of this is invasion. If my or my neighbor’s house was in the same situation, the city would not build anything to contain it.” Upon being reminded by the reporter that the land on which he is building his hotel is also an invasion without all the relevant paperwork, he declined to comment.

Upon learning of the criticisms towards his project from Vilma (see video below), he asked me to “write down that I (Hélio) am thinking of giving up my project due to the negativity of the reporter.”

Thor Batista, the son of Brazil’s richest man Eike Batista who donates various vehicles to the Pacifying Police Units (UPPs), has constantly been seen making rounds in the community ever since its pacification in November 2011. Many point him out to be Hélio’s partner, who doesn’t simply deny, but becomes irritated by the statement. The subject is so commonly spoken about in the community that even the cook Léa Silva, or Tia Léa (famous for having invited President Obama to eat feijoada at her place) questioned Eike about his interest in Vidigal. She saw him by coincidence on the street Rua Dias Ferreira, in Leblon. “He says that he doesn’t have any interest, but he smiled a little when he said it,” she stated.

“If we had to leave the community, and a white elephant appears on our land, I am going to defend my rights and prosecute the City Hall for damages,” exclaimed Vilma, from Carlos Duque. 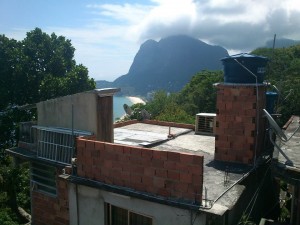 The sad irony of this situation is that it is happening in a location that, much like almost every street in Vidigal, is named after a participant in the resistance against a coup by the city in 1977 to remove the residents of 314, located on the seafront, to give way to luxury developments. Only they forgot to tell the truth to the residents, who were notified to leave their wooden shacks, which were supposedly at risk. In exchange, they were given apartments “the size of matchboxes” in the public housing project of Antares, located in the North Zone of the city. “They sent a garbage truck to come get our things,” recalled Seu Armando Almeida Lima, then-president of AMVV and, alongside Carlos Duque and other warriors, managed to turn the story around, with the help of the Pastoral das Favelas. The fight came to an end with the first and only visit by a Pope to a Brazilian favela, when on July 2, 1980, John Paul II blessed the hill, still known for being very Catholic.

According to Hélio Pellegrino, the story is false. “I doubt that the city has done that.” But after learning that composer Sergio Ricardo had moved to Vidigal back then and composed a musical on the subject, Pellegrino concluded, “It is nonsense to dwell on the past.”

Residents are organizing to change their future. The first meeting happened last Saturday at the Inaugural Community Development Seminar in Vidigal.