On October 12, a Children’s Day party and feijoada feast organized by a samba school from the community of Complexo do Viradouro were occurring in the plaza of the group of favelas in Niterói, Rio de Janeiro’s sister city across Guanabara Bay. The community festivities were brusquely interrupted by the Shock Police Battalion (BPChq) with the arbitrary detention of a young man, rifle shots fired into the air, pepper spray, and tear gas.

The conflict began after a young man was beaten and arrested without justification, according to the community. In protest, residents closed off both sides of Doutor Mário Viana Street. “They took an innocent person. They closed the street,” said a man showed in the video below.

According to residents, the man, who had a wounded arm, was called by a Shock Police officer. The officer interrogated him about how and why he was wounded. After explanations, the officer freed the man, who crossed the street and rejoined the feijoada with his friends.

However, minutes later, the same agent returned to call the man over to the police area. Again, the man crossed the street in the direction of the police, but, this time, he received a punch and was shot from inside the Shock Police car. At that moment, residents went in the direction of officers, in a peaceful way, to understand the motive for the arrest, saying that the young man was “a worker.”

That was when, according to the video circulating on social networks, one of the officers fired rifle shots into the air.

Women, the majority of them black—including mothers holding hands with children—started to run to protect themselves. After the shots, the police left, taking the young man. A Military Police patrol remained parked on the scene.

According to reports from the community after some minutes, two other cars from the Shock Police Battalion returned to the entrance of the community located on Doutor Mário Viana Street and launched three tear gas grenades even though there were children in the area, interrupting the Children’s Day festival and the gathering of residents at the feijoada.

“It was the biggest cowardice! There were more than 20 children in the street. This is revolting,” residents, who will not be identified, complained to RioOnWatch by telephone. 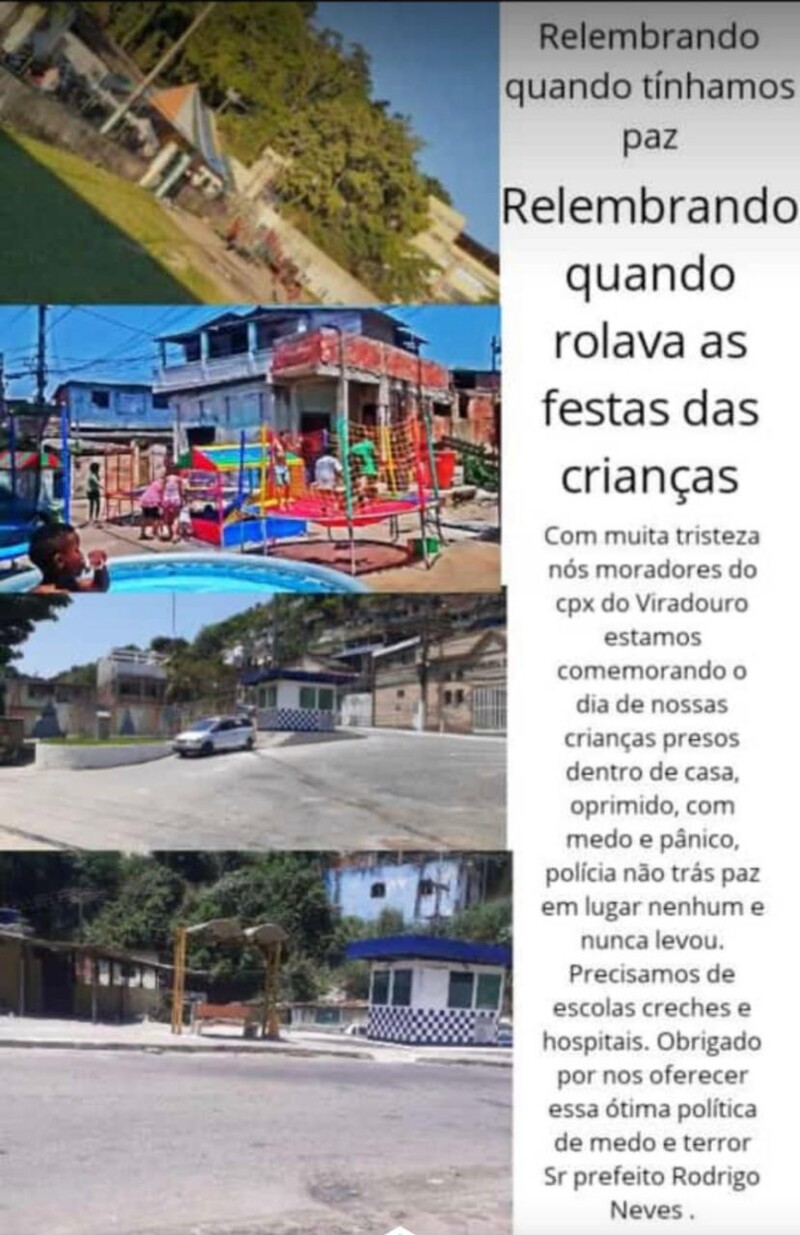 The young man detained by the Shock Battalion was reported for Disrespect to Authority and Disobedience and, afterward, freed. Residents of the community contested the police version of events. This type of action follows the same pattern of police treatment of occupation in favelas with Pacifying Police Units.

Complexo do Viradouro has for 50 days been under a police occupation—without a set deadline for it to be concluded—even after the Supreme Court approval of lawsuit ADPF 635, which suspended police operations in favelas in the State of Rio de Janeiro during the Covid-19 pandemic.

According to a statement from Niterói’s 12th Police Battalion, sent to RioOnWatch in August, the occupation of Complexo do Viradouro was communicated to the Rio de Janeiro Public Prosecutor’s Office. The police alleges that the permanent intervention was necessary to make public works possible in and around the community. Two bulletproof police cabins were installed in the vicinity of the community.

Since the start of the police occupation, residents of Complexo do Viradouro, in addition to the neighboring communities of Zulu and Atalaia, experienced a daily routine of fear and militarization, with police abuse and violations of human rights. Residents have been protesting against police abuses with the hashtag #RespectResidentHomes.

The denunciations of the residents of Complexo do Viradouro about the police abuses and violations during the occupation have already been sent to the National Council of Human Rights, to the Commission of Defense of Human Rights and Citizenship of the Rio de Janeiro State Legislative Assembly, to the State Public Defender’s Office, and to the State Public Prosecutor’s Office.

On September 10, Niterói mayor Rodrigo Neves had met with community leaders, among them the Federation of Residents’ Associations of the Municipality of Niterói, in Solar do Jambeiro. The Human Rights Commission of the Brazilian Bar Association and municipal secretaries were also present.

On that occasion, the mayor heard reports of residents about police abuses and affirmed that he regretted them and guaranteed that he would take the reports to the commander of the 12th Police Battalion of the region, colonel Sylvio Guerra. The mayor also recognized the residents’ request, but affirmed that the presence of the Military Police is essential for the conclusion of the work, in addition to defending the installation of the bulletproof police cabins in the community.