The gesture of arms in an X across the chest, with closed fists, that went around the world in a photo of Ágatha Félix—an 8-year-old girl who died last year from a shot fired from the rifle of a police officer, in Complexo do Alemão in Rio’s North Zone—was repeated by her mother Vanessa Francisco at the Protest in Memory of Ágatha Vitória Félix, a livestreamed Instagram event organized to demand justice for her daughter on September 21. The protest included the participation of Raull Santiago, an activist from Coletivo Papo Reto (Straight Talk Collective), a human rights media collective in the favelas of Complexo do Alemão and Penha; Mônica Cunha, a human rights activist and founder of Movimento Moleque; and Rodrigo Mondego, a human rights lawyer who is responsible for Félix’s case.

“As a mother, I couldn’t leave this moment blank. I call for justice!” Francisco declared, thanking the support network that organized itself around her in search of justice. Félix was shot in the back inside a kombi (transport van) in Morro da Fazendinha in Complexo do Alemão.

Santiago described the rapid mobilization in the community: “We have a WhatsApp group in which we monitor violence in Alemão when there are police operations or shootings, to stay safe. We knew of Ágatha’s death as soon as it happened… When something bad happens, the favela becomes agitated. [News site] Voz das Comunidades called many people to action to raise awareness about what was happening. People wanted to go to the streets, they stayed on the streets, and the next day, there was an even bigger protest. The whole world ended up knowing about it.”

But the activist emphasized that the network’s speed reflects a State security policy which criminalizes favelas and disregards their residents’ right to life, including children. The community’s mobilization forced Rio de Janeiro’s Civil Police to conduct a reenactment of Félix’s death. The police inquiry concluded that the shot actually came from the weapon of a Military Police officer. 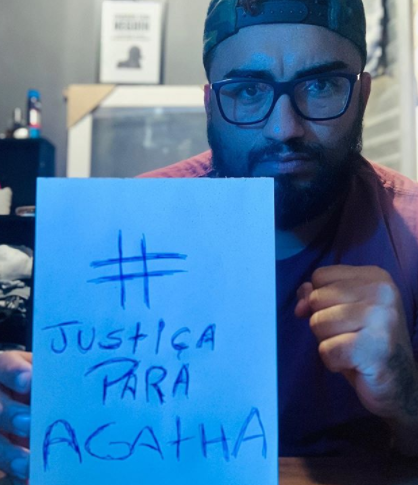 According to the shootings-tracking platform Fogo Cruzado, one year after the death of Ágatha, 28 children in Greater Rio have been shot by the police. Of these, eight did not survive.

“What we did was to restore a network which unfortunately we already know how to organize: the contacts that are called into action when someone dies. They include members of the media and residents… We are not going to accept extermination,” said Santiago.

“We stand together!” announced Cunha, who shares the same pain as Vanessa, with her arms crossed in front of her chest and fists clenched during the event.

Cunha’s 20-year-old son, Rafael da Silva Cunha, was killed by police in 2006. She recalled the day of his death: “The sun was shining wonderfully, one of those days that we Rio de Janeiro residents love. My son would have been barbecuing… So I was even angrier, because the day was still beautiful. We are chosen to die or we are incarcerated, but what the State didn’t expect is that we would be here today! Look how we are giving the system a beating! It is hurting, but it won’t work, you will not silence us!” Mentioning the Black Coalition for Rights‘s campaign against the genocide of Brazil’s black population, Cunha explained that human rights are not secure as long as there is racism.

“Genocide is the deliberate extermination of people motivated by ethnic, national, racial, religious and sometimes socio-political differences. In Brazil, it is the result of the racism that shapes the State and society, which affects the police, businesses, political institutions and the population as a whole,” says the Black Coalition for Rights’ website, which reveals that 91% of children killed by “stray bullets” in Rio de Janeiro are black, like Félix.

People have even asked me if I am afraid of them doing something to me. I replied, do you actually think that I am afraid?

I carried my daughter for nine months in my belly, it was painful, I worked going up and down stairs, I would get home with pain in my back, but the feeling was that I had worked another day to guarantee my pay and to buy things for my baby that was coming, I felt happiness at each month that passed, it was the feeling that soon I would know her face. I already knew that she would be beautiful, I said that she was leaving me ugly to be beautiful.

The sword is passing, who provides for me is just and does not sleep. I will see justice come to pass. Because I am not sleeping, I am acting, and GOD is providing my Victory.

I am counting on everyone at the protest in memory of my Agatha Vitória, at 7:30pm on my Instagram.

The online protest in memory of Félix closed with the participation of Mondego. He recounted the steps that the Human Rights Commission of the Rio de Janeiro branch of the Brazilian Bar Association took to advance the case, from the first moment. He recalled the first 24 hours at the Homicide Police Station, at which, after a long wait, the forensic doctor confessed that it would not be possible to release the girl’s body until the next day, because nobody knew how to operate the body scanner—the equipment necessary to carry out the physical examination.

“Even the forensic doctor got upset. It was absurd for a family to suffer so much because of an error by the State and to have to suffer even more because of another error,” said Mondego, adding that the Commission had to call several organizations to get someone suitable to do the examination to release the child’s body.

The second challenge, according to the lawyer, was to get together witnesses in a case in which people are normally afraid of being threatened for speaking. However, it was important to gather them to prove that the murder of Ágatha was not caused by a confrontation with an exchange of shots between police and the local gang of drug traffickers, as agents of the Pacifying Police Unit (UPP) claimed, but rather because of an error by a State security agent.

According to Mondego, seven witnesses agreed to testify in the case to refute the police’s version of events. The UPP agents claimed that they shot at two people on a motorbike who were escaping from a police checkpoint, but that the shot hit Félix inside a VW van, a kombi, an alternative form of transportation for favela residents due to the lack of public transportation in Rio’s communities. All of the witnesses remained anonymous. However, the kombi driver immediately volunteered to “show his face,” said the lawyer.

Despite the Rio de Janeiro Public Prosecutor’s Office’s charge of premeditated murder that was filed last year, it is only now that the first hearing with the Office has been scheduled, for November 26. Still, it is important to emphasize that in the police officer’s report, one of the officers was identified as the individual responsible for the shot. “This is what we wanted,” explained Mondego.

With her arms crossed at the chest and fists clenched, Vanessa ended the homage sending a message to her daughter, to the participants of the event, and to all the mothers and fathers who are victims of State violence: “We stand together!”