What dynamics does electoral behavior reveal with the passage of time, amid so many unfulfilled promises and frustrated expectations? How does this affect people’s votes or other responses today? Can this year’s choices be influenced by the coronavirus pandemic, which has made clear the perverse absence of public policy in promoting an efficient management of the humanitarian crisis in the favelas and other peripheries?

To know a little more about how these questions are perceived by voters living in the outskirts of the municipality of Duque de Caxias in Greater Rio de Janeiro’s Baixada Fluminense region, RioOnWatch interviewed three residents of the neighborhood of Pantanal. In Pantanal, there are neither daycares nor emergency clinics, and almost all streets lack adequate sewerage, a situation that has been compounded by longstanding mobility problems.

In 2018, on the eve of the last general election—when Brazilians elected the president, governors, senators, and members of state and federal congress—RioOnWatch visited the neighborhood of Pantanal to hear residents’ analysis of the political scenario. At the time, we heard from three residents: Juliana Maia, a tour guide and one of the founders of the Lanatanpa Family social project, which disseminates hip-hop culture and organizes talks about various topics for local youth; Jonathan Farias, a business owner; and Gabriel Goulart, a young, 20-year-old barber.

This time, on the eve of the 2020 municipal elections, we were not able to locate the two young men for a follow-up conversation, but we were able to speak with Juliana Maia. She was accompanied by retiree Orlando Sérgio and nutritionist Olga César. All three participants have lived in Pantanal their whole lives.

But what has time taught the trio about unfulfilled promises during each election year? How does this cycle of endless repetition impact their lives? In Maia’s opinion, part of what this community lives through is directly related to an inconvenient agreement among its own residents.

“If someone [the candidate] comes here every four years and makes a good impression, people go and dance to the music. Memory loss is also a problem. Voters forget too quickly. They’re wrong, but we, as a population, also contribute to this,” she says.

Sérgio outlined another element that contributes to this local political scenario: the heat of the moment.

“The guy comes here, promises that he’ll bring schools, emergency clinics, etc. He holds a party, a little barbecue, people will say they’ll vote for him, then he leaves. Two years later, and it’s the same thing. The people always will believe that something will change,” says the 44-year resident of the neighborhood. He says that he has “never seen anything good [coming from politicians].”

César says that politicians take advantage of this forgetfulness. They know it is one of their most powerful weapons, allowing them to repeat the same thing over and over again. “If every person thought their vote was the most important key to their future, they would never vote for the same people. But people sell themselves very easily, for so little.” 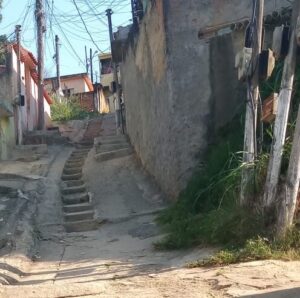 Maia, a resident of Pantanal for the past 37 years, says that her greatest frustration was that her own project, Lanatanpa Family, has not succeeded in awakening a critical perspective among all of the residents who are deceived year after year.

“Maybe these promises would be a bit more consistent if all that was said and worked on at our roundtables about political party responsibility had been absorbed. But everything falls flat when some crook comes along wanting a vote. This lets me down a lot. It’s not just one mayor that has abandoned Duque de Caxias, it’s many of them!” she says.

César complains about that the peripheral neighborhoods of Caxias do not have as many technological systems of monitoring and control, like CCTVs, as do streets and commercial establishments of the large urban centers, including those of Baixada Fluminense. In her eyes, if Pantanal had more of these, deaths—such as those of her own father and cousin, murdered in the same year—would have been avoided. “They don’t invest in security in this country,” says César, who affirms that the region is an escape route for car thieves from other localities and police operations frequently put residents’ lives at risk.

Elections and the Pandemic

Ever since the 21st century’s largest health crisis arrived in Brazil in March of this year, there have been various reports of humanitarian aid organized by local collectives from the peripheries. Once again, public authorities made insufficient efforts to provide protection to poor communities that need practically everything: food, water, emergency aid, personal hygiene materials, etc.

The state government and most of the mayors took part in one historical omission after another, hindering instead of helping with a vast series of daily cases of necropolitics. Some significant initiatives have been carried out, such as that of the Rio de Janeiro State Public Defender’s Office, which pressured the public water utility CEDAE to expand its distribution of water and even reactivate it in areas of economic vulnerability. But how will these scenarios influence the decisions of voters from the peripheries in 2020?

“All of this only goes to show that no one is worried about us. If we are able to get out of this pandemic alive, this means we can deal with anything. If the message was ‘you poor people are going to die because you have nothing,’ I say, we’re going to survive. When we need you [the government], you don’t appear. You’re the ones who will need us,” affirms Maia.

César thinks a little differently. For her, most politicians will continue to act as they always have. “[At election time] they are always going to help you with what you need, and the [voters] will be charmed by the caring gestures of the candidates. Because the communities are always alone, because politics doesn’t reach the communities, [the community] has always supported itself. Because it’s always complicated to explain to those who have less schooling who exactly that candidate is who is passing through their neighborhood—the one who will buy you a gas canister, or give you a little money. [It’s difficult to explain] that you must check if that person has a clean record and listen to their proposals. It’s really complicated,” says the nutritionist.

And voting? Is there any energy left for it? Sérgio says there isn’t, not even a little. “We’re obliged to vote for politicians who are not idealists. All they’re worried about is making profit. Although I already know who I’m voting for for mayor, I feel in my heart that he’ll do little for the city. It’s complicated.”

Fabio Leon is a journalist, human rights activist, and communications officer at the Grita Baixada Forum.