This article is part of RioOnWatch’s #VoicesFromSocialMedia series, which compiles perspectives posted on social media by favela residents and activists about events and societal themes that arise.

Activists began their protest in front of the Carrefour supermarket at the Norte Shopping mall and continued on Dom Hélder Câmara Avenue.

About 200 people protested on November 22, at 3pm, in front of the Carrefour supermarket at the Norte Shopping supermarket in the North Zone of Rio de Janeiro, against the murder of Afro-Brazilian, 40-year-old João Alberto Silveira Freitas. João Beto, as he was known, was beaten and killed by two white security guards from the Grupo Vector security firm, which provides its services to the Carrefour chain, on the eve of Brazilian Black Consciousness Day. Activists raised banners and posters in three languages—Portuguese, English and French—and read speeches in all three languages.

Carrefour in Brazil while Noel Prioux is not fired.
We invite brothers and sisters all over the world to join us in this fight against racism.
The brand Carrefour kills and is racist.
Noel Prioux has blood on his hands.
Black Lives Matter. #VidasPretasImportam #BlackLivesMatter

Protesters raised posters with phrases like “Black Lives Matter,” “Stop Killing Us,” “Justice for Beto! Carrefour’s hands are stained with black blood,” and the phrases were shouted at all times. The main demand of the anti-racist demonstrations against the death of João Alberto Freitas—who, according to the forensic report, was killed by asphyxiation in front of his wife, Milena, who demands justice—is the dismissal of Carrefour Brazil CEO, Noel Prioux.

We demand that CEO NOEL PRIOUX take responsibility for the deaths of black people in the CARREFOUR market.

As long as NOEL PRIOUX is not fired, we will be in all Carrefour markets in Brazil. #CarrefourAssassino #NoelPriouxOut @RicardoNandes pic.twitter.com/LxNZpCYvqT

On November 21, Prioux videotaped a statement released on prime time television, around 9pm. In the statement, he lamented the death of welder João Beto, saying: “What happened at the Carrefour store was a tragedy of incalculable dimensions.” At the November 22 protest in Rio de Janeiro, a sign that said “we are working normally” was spray-painted and transformed into “we are killing normally.”

The crime was committed in front of the cell phone cameras of customers, who posted an image of the scene on social media. A white employee, also from the Carrefour chain, filmed the entire criminal act of the security guards, but she tried to intimidate and prevent at least fifteen witnesses from recording the scene. The protest denouncing racism in front of the Carrefour at the Norte Shopping mall in Rio occurred alongside protests in six other cities against the chain in Brazil. 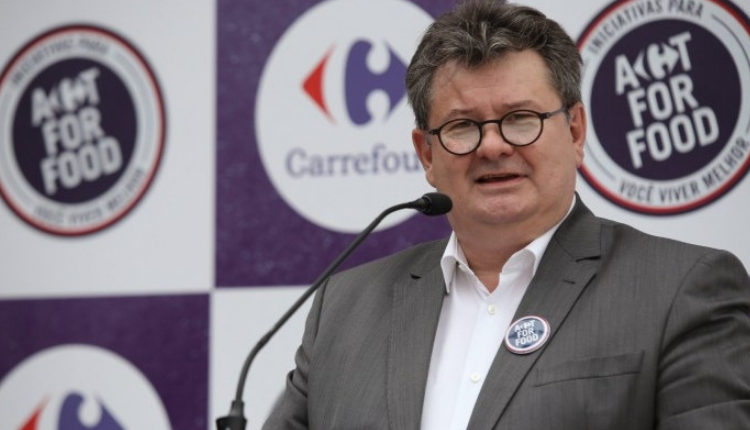 “Everyone bleeds the same color, but not everyone bleeds for having color in Brazil, only us black people. Black Lives Matter!” protested Seimour Souza, coordinator of Uneafro-RJ and a parliamentary aide.

“‘What am I gonna do? I need to fight! It’s a message for you #CarrefourMurderer. My Black Skin is power. So listen to me: Stop killing me!’ #BlackLivesMatter,” one of the protesters said in English.

The doors are not being serviced
Yesterday they were all working
I work in front of the market
They are lying
— Ana Carvalho (@Ana_carol_2205) November 22, 2020

At 4pm, the supermarket was completely closed and the group started to circulate through the mall, shouting “Carrefour Murderer.” Many of the mall’s customers joined the demonstration, circulating with the activists. No violence was committed by the protesters.

“We have a voice and we made it heard in English, French and Portuguese. If they don’t hear, we scream, and our scream is organized. Stop killing us! We will shout in as many languages as needed. I am here to ask for respect for our bodies and our blood. Not only on the 20th [Black Awareness Day], but on the 19th, 18th, because Beto’s murder shows how our struggle and our bodies need peace every day,” said Renata Nunes, a resident of City of God, in the West Zone, in a livestream on the Instagram channel @JotaMarques.

“We are only aware of Beto’s case, that he was murdered without objection, because someone filmed at the same time that a white employee was filming the scene in a criminal way. Filming is important to report these violent facts. It was only with the video that we managed to do this: get people on the street, showing that racism exists. And there is no going back, racist violence will not pass! No more genocide of the black people,” said Raull Santiago, a human rights activist and a member of Coletivo Papo Reto (Straight Talk Collective), an information-exchange network in the favelas of Complexo de Alemão and Penha in Rio de Janeiro’s North Zone.

Several protesters asked for those who were watching livestreamed coverage of the protest to continue watching the transition in order to help guarantee the safety of the activists through visibility. After walking down the corridors of Norte Shopping, they headed toward Dom Hélder Câmara Avenue, one of the main roads in the region which gives access to the main entrance to the mall, at 5pm, chanting: “Marielle asked, and I will also ask: How many more will have to die for this war to end?!”

The Black Coalition for Rights, an association that brings together 160 organizations and collectives from the black and anti-racist movement across Brazil, formally petitioned the Federal Public Prosecutor’s Office and the Rio Grande do Sul State Public Prosecutor’s Office to investigate Freitas’ death, according to news site UOL. In a note of condemnation published November 22, the Coalition states that racism at Carrefour is a recurring issue. 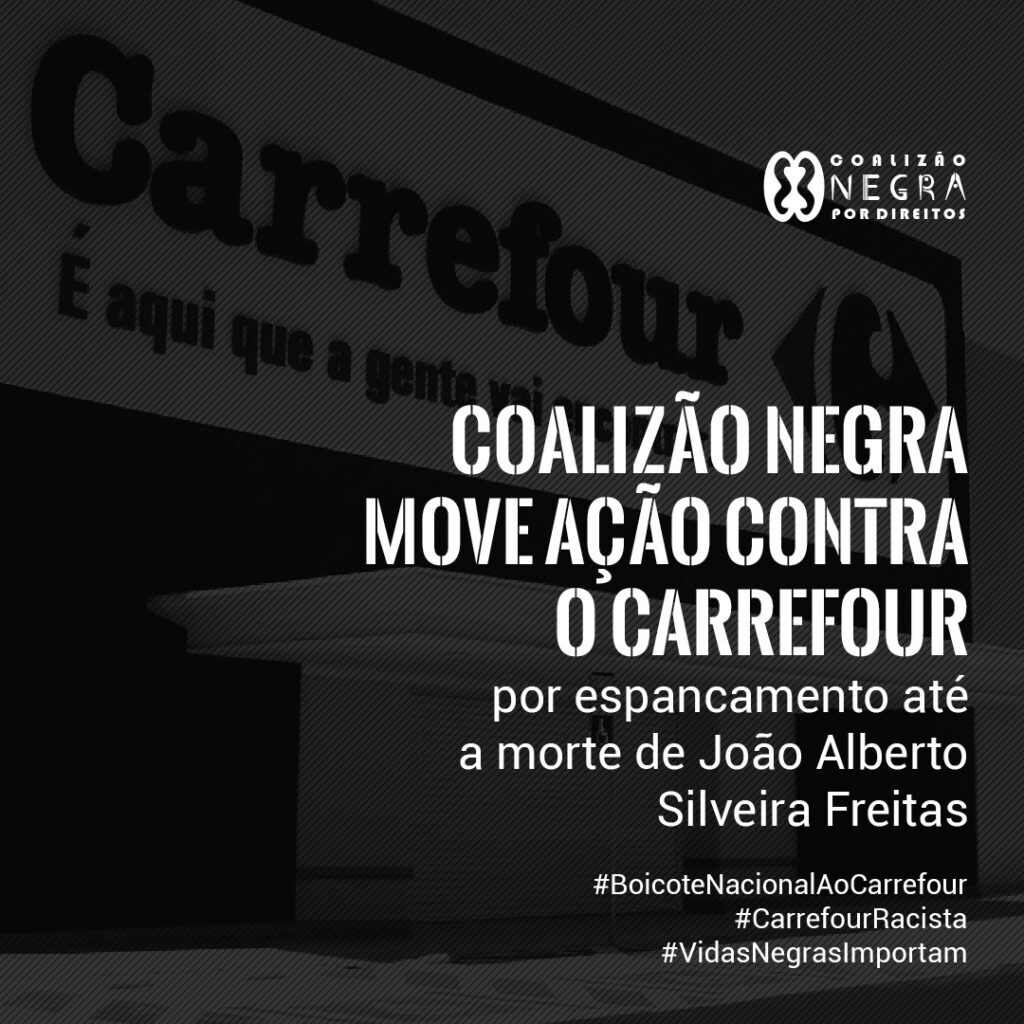 “The video circulating on social networks leaves no doubt about the cowardice of what happened. Two security guards at the Carrefour supermarket, under the watch of an off-duty Military Police officer, beat a black man to death with no objective possibility of defending himself. It is not the first time, the supermarket chain Carrefour is a repeat offender in cases of racial violence, and therefore needs to be held responsible for these practices,” says the note.

Wania Sant’anna, 50, a historian and researcher of gender and race relations and member of the Black Coalition in Rio de Janeiro, representing Casa Ilê Omolu Oxum, says: “Outsourcing security is a serious problem at retail companies. I worked over ten years as a diversity consultant for large companies and I can tell you that the scenario is scandalous. Private security companies hire professionals who work on the side. They are not prepared and do not receive any human rights training.”

“I don’t want to know if Carrefour has more than 50 black employees. I want to know how much it profits and how much it pays for property security, what kind of training it gives. Opening the store two hours later saying that it will provide anti-racist training is not a solution,” said Sant’anna. 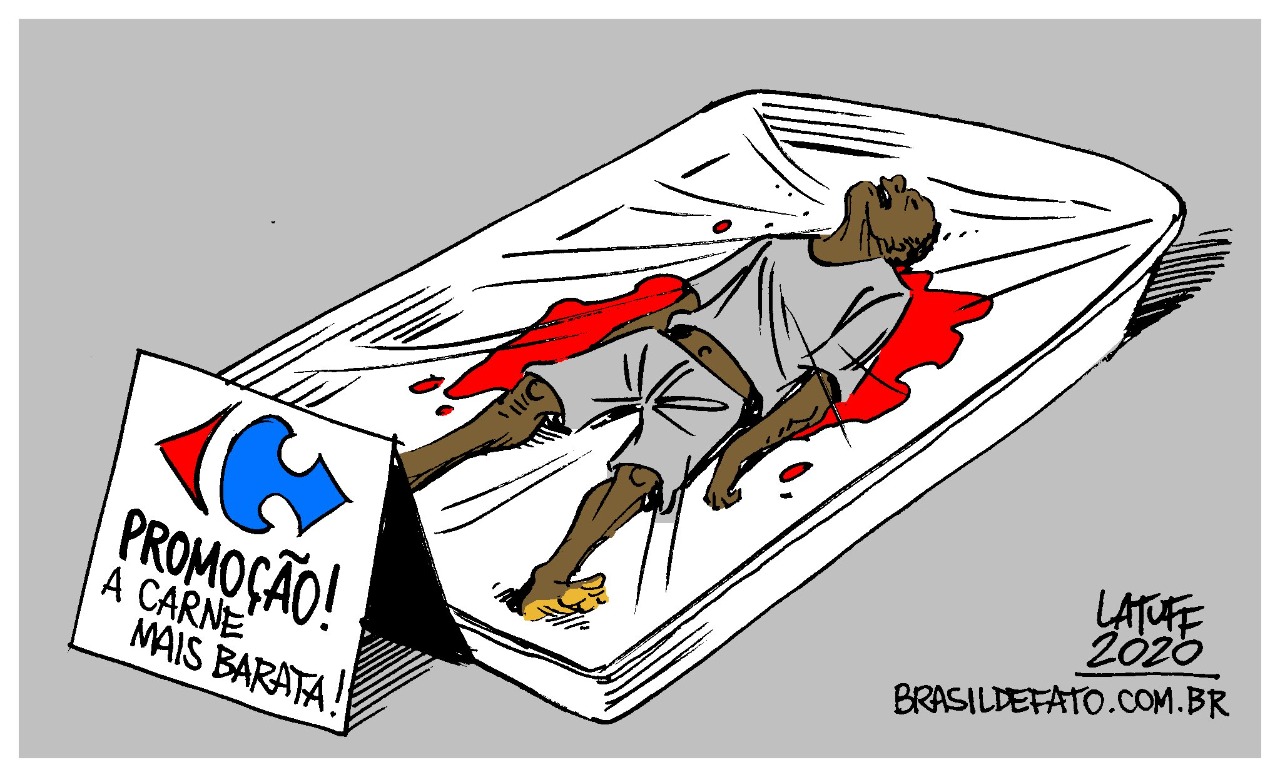 For her, the supermarket should be held criminally responsible for Freitas’s death. “Carrefour is responsible for this murder. He walks away, taken by a security guard, when he was in front of the cash register. He is taken to the parking lot and there he is violently and excessively beaten until he dies.”