This is the fifth article in a series covering the events of the 3rd Annual Full-Network Meet-Up of the Sustainable Favela Network, which happened online on November 7, 2020.

The Sustainable Favela Network (SFN) is a project of Catalytic Communities (CatComm)* with the aim of building solidarity networks, increasing visibility, and developing joint activities that support the expansion of community-based initiatives that strengthen environmental sustainability and social resilience in favelas across the Rio de Janeiro Metropolitan Region. The project began with the 2012 film Favela as a Sustainable Model, followed in 2017 with the mapping of sustainability initiatives in favelas across Rio. In 2018, the program organized local exchanges between eight of the most well-established community programs, followed by the 1st Annual Full-Network Meet-Up, launching the SFN formally on November 10, 2018. In 2019, the program organized another round of exchanges—this time open to all SFN members and to members of the public—in five favelas in Rio de Janeiro. The activities carried out in 2019 culminated in the 2nd Annual Full-Network Meet-Up. In 2020, the SFN’s Working Groups continued to meet—online, due to the coronavirus pandemic—carrying out a range of activities such as rounds of support (rondas afetivas), teach-ins, seminars, fundraising campaigns, a commitment letter for political candidates, and a debate with mayoral candidates. To close the year, the Sustainable Favela Network held its 3rd Annual Full-Network Meet-Up, summarized below and in this series, with the aim of bringing the network together, promoting the mutual strengthening of relationships among socio-environmental organizers, evaluating the SFN’s 2020 activities, and making plans for 2021.

After the virtual tours organized by the Water and Sewerage Working Group, the Sustainable Favela Network’s Solar Energy Working Group invited participants of the 3rd Annual Full-Network Meet-Up to virtually get to know some of the solar panel projects already installed in Rio’s favelas, during the event “Solar Energy in Favelas is a Reality: Tour of Solar Panels in Babilônia and Santa Marta.” Speaking directly from the Santa Marta Residents Association, Verônica Moura and Leonardo Luis Almeida da Silva, from the Insolar project, discussed the project’s impact on the residents and the territory itself. “[The project] was created together with the residents,” Moura explained, adding that its first action in 2014 was a study, carried out by the residents, to identify places where solar panels could be installed.

During the virtual tour, Moura filmed the lower part of her community, showing the solar panels installed at the Residents’ Association, in a daycare center, in a samba school, at a family health clinic, and in the points on the community’s funicular tram, commenting that there are more installations in the upper part of the community. Da Silva noted that on the tram’s track, the panels serve to supply a reflector and some USB outlets to charge cell phones and other devices. Da Silva also showed equipment that measures the amount of energy generated at the Residents Association and the system’s online monitoring equipment.

Da Silva explained that before the Insolar project began in Santa Marta, he “had no profession,” but he became an electrician thanks to the project, and today, he has the “opportunity to realize photovoltaic installations at other companies.” He participated in Insolar’s first training for installers in 2016, a training specifically for community residents interested in installing solar panels.

During their talks, both highlighted the emancipating value that renewable energy brings to the favelas: “You see that it works… having clean energy, you can even sell [the energy] in the future, this is fascinating,” said Moura. “Our dream is that this will grow even more within our community, that I can have solar energy in my home, and that it can expand to other communities.”

“It’s very interesting to see that this is a reality,” commented Guilhereme Tavares of Liter of Light. “We really have to dream! Together we can go further.”

Élida Nascimento of the Inclusion Project in the community of Éden in Greater Rio de Janeiro’s municipality of São João de Meriti asked how they managed to install so many panels if the cost is so high. Moura and Da Silva clarified that Insolar seeks financing for the moment of installation, but that the equipment lasts about 25 years, and that therefore, with the reduction in the monthly price of electricity bills, significant savings are generated in the long term. “It is an investment that will return,” said Da Silva.

Following the tour, the floor was given to Revolusolar, from the community of Babilônia. Adalberto Almeida, co-founder of the Revolusolar initiative, is the first solar panel installer in Brazilian favelas. “I did not believe it was possible to have energy through solar panels. After we implemented the system, I saw that it is possible.”

Eduardo Ávila, the current executive director of Revolusolar, said that the initiative is in the process of building the first favela-based solar cooperative in Brazil or anywhere in the world. “It is a model that we have been designing in order to be sustainable and replicable in other communities in Rio de Janeiro and Brazil, not only in favelas, but also in indigenous and quilombola [communities] as well.”

Solar energy is a key source of employment for several communities. Ávila confirmed that the number of jobs generated by solar energy is immense in Brazil (200,000) and that even during the pandemic, 40,000 jobs were created from solar energy across the country. Both Revolusolar and Insolar also commented on the presence, still shy but significant, of women in the community trainings for photovoltaic panel installers.

Starting the virtual tour, Ávila reported that he was unplugging his cell phone from an outlet and began to move toward the solar panel that was powering that outlet. The audience could see the panels of the restaurant Stars of Babilônia, which were installed with Almeida’s help. Ávila added that next to these solar panels, there is also a green roof, which “brings thermal comfort to the construction and increases the energy efficiency of the generation of the solar panels.” 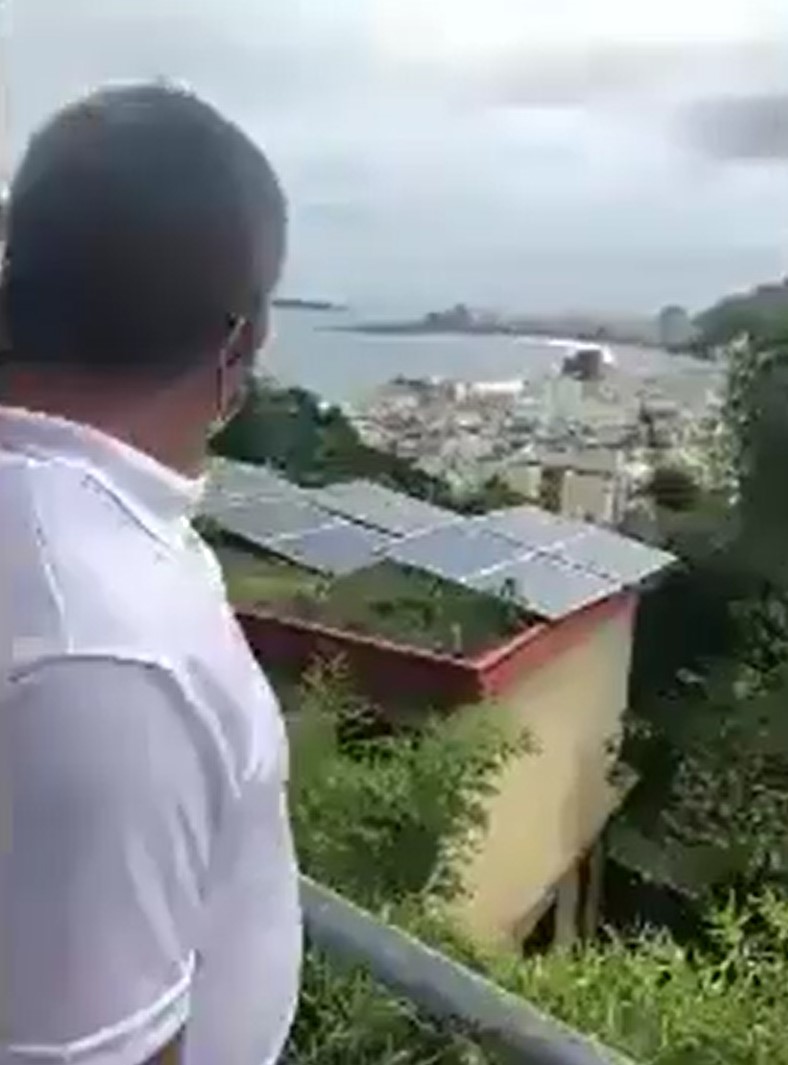 Almeida explained that it was in those twelve panels “where it all began… I’m very moved by this because it’s historical. I came from a region where I got to know electricity when I was 19. I came from the interior of Northeast Brazil, and now I’m in front of a system that I helped to create… It’s a pride for me to be a part of it.”

Hans Rauschmayer of Solarize Trainings, another member of the Solar Energy Working Group, contextualized the situation saying that “the [energy] licensees have always said that solar energy is for rich people. Rich people put their panels on the roof, and the poor have to pay for the [conventional] energy network. However, we are at a time where solar energy is also becoming technology for the poor, for the whole of society.”

Rauschmayer recalled that last year, 40 organizations from the Sustainable Favela Network signed a document sent to Brazil’s national electricity agency ANEEL, defending the non-taxation of solar energy, aiming to keep this technology accessible, and that the mobilization had an impact at the national level. “This generated a surprise in February, when Tiago Fraga of the FRG Group called me and said ‘Hans, we want to donate a solar system to a social benefit organization.'”

The Solar Energy Working Group quickly assembled a project to install the panels at the NGO SER Alzira de Aleluia, in Vidigal, which will generate savings of R$300 (US$60) per month for the NGO. The installation had to be postponed due to the pandemic, but the project will be implemented as soon as possible. The Working Group also has an open form for other SFN initiatives that want to put solar energy in their headquarters. These initiatives will be invited to develop pre-projects to be presented to funders.

Many participants of the Annual Full-Network Meet-Up showed interest in collaborating with the solar energy initiatives in the favelas, and Hans Rauschmayer closed the activity celebrating: “The Sustainable Favela Network is achieving so much, it is amazing!”

Watch the entire event of the tours of the SFN solar energy projects.

This is the fifth article in a series covering the events of the 3rd Annual Full-Network Meet-Up of the Sustainable Favela Network, which happened online on November 7, 2020.