This is the fourth article in a series covering the events of the 3rd Annual Full-Network Meet-Up of the Sustainable Favela Network, which happened online on November 7, 2020.

The Sustainable Favela Network (SFN) is a project of Catalytic Communities (CatComm)* with the aim of building solidarity networks, increasing visibility, and developing joint activities that support the expansion of community-based initiatives that strengthen environmental sustainability and social resilience in favelas across the Rio de Janeiro Metropolitan Region. The project began with the 2012 film Favela as a Sustainable Model, followed in 2017 with the mapping of sustainability initiatives in favelas across Rio. In 2018, the program organized local exchanges between eight of the most well-established community programs, followed by the 1st Annual Full-Network Meet-Up, launching the SFN formally on November 10, 2018. In 2019, the program organized another round of exchanges—this time open to all SFN members and to members of the public—in five favelas in Rio de Janeiro. The activities carried out in 2019 culminated in the 2nd Annual Full-Network Meet-Up. In 2020, the SFN’s Working Groups continued to meet—online, due to the coronavirus pandemic—carrying out a range of activities such as rounds of support (rondas afetivas), teach-ins, seminars, fundraising campaigns, a commitment letter for political candidates, and a debate with mayoral candidates. To close the year, the Sustainable Favela Network held its 3rd Annual Full-Network Meet-Up, summarized below and in this series, with the aim of bringing the network together, promoting the mutual strengthening of relationships among socio-environmental organizers, evaluating the SFN’s 2020 activities, and making plans for 2021.

A new possibility which arises as a result of virtual meet-ups is the opportunity for participants to tune in from wherever they are and showcase their surroundings. This gave some members of the Sustainable Favela Network’s (SFN) Water and Sewerage Working Group the chance to demonstrate how the sustainable solutions they speak of take shape in real life. In this section of the SFN Annual Full-Network Meet-up, participants were invited to virtually experience these solutions in real time. 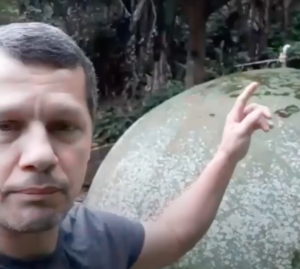 Otávio Barros of Vale Encantado in Alto do Boa Vista began the event by showing how his community’s sewage is treated by a local biodigester and presenting the entire sewage treatment biosystem. Barros explained that the system receives household sewage via pipes connected to an anaerobic dome, where bacteria digest the organic matter in the sewage and produce biogas, a component which is both liquid and solid and remains inside the dome. At the top of the dome, there is an outlet connected to a valve and a pipe in order for the gas to escape in the direction of the homes, where it can be used for cooking.

The liquid content produced in the dome goes into a second compartment, where an effluent is released to provide nutrients for the roots of plants such as taioba leaf and banana trees. The plants then go through the process of evapotranspiration, treating the water and leaving it between 95-99% clean, according to Barros. This system is long-lasting and was projected for 150 houses, but currently only receives sewage from five houses. Due to the Covid-19 pandemic, the plan to connect all of the surrounding houses to the system was paused, but will recommence as soon as possible and make Vale Encantado the first favela to completely self-manage its sewage, independent of CEDAE. 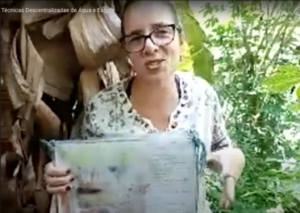 The system sparked the curiosity of some SFN members, such as Iara Oliveira from the Alfazendo project. Oliveira asked Barros and his partners at Taboa Engineering, Tito Cals and Leonardo Adler—both members of the Working Group—if this sustainable solution could be replicated in other favelas, such as in her community, City of God, where CEDAE does not meet the population’s needs. Cals said that these biosystems are technologies with a lot of potential; they are effective, completely adaptable to a specific location, and are sometimes even adopted by state-run sewage utilities. However, Adler pointed out the limitations of this type of project for a community the size of City of God. He said that a limiting factor is the space needed to handle all the sewage received, in addition to the topography of the territory.

The next person to speak was Alessandra Roque of the Naturalê project in Morro da Providência, Brazil’s first favela now 123 years old, located in Rio de Janeiro’s downtown Centro. Roque, creator of agroforestry projects and natural methods of care, showed everyone her home, affectionately nicknamed an “eco-shack.” She presented her sewage treatment system, which includes an evapotranspiration basin composed of banana trees. 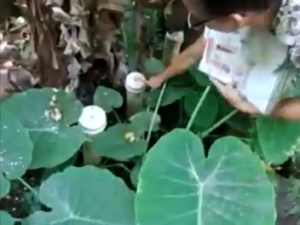 “We use tires, gravel, and a Geotextile Underlay roofing material” Roque explained, mentioning also that the basin has three analysis tubes with different depths so as to monitor the quality of the evapotranspiration basin treatment. Although the system is small, its great achievement is that it serves as a reference for environmental awareness projects in the community. “I really want to show this to everyone so they can get to know its structure. There was no one doing this here before,” reported Roque, who then showed the drawings in her backyard of the evapotranspiration basin operating scheme. “We are always showing people this new system, since everyone throws sewage out in the open in this part of the community and there is a way to treat it.”

Asked if the system requires a lot of maintenance, money or care, she replied: “I’ve had it since 2017 and I only take care of the banana trees, as in any garden.” She also pointed out that the tubes have a shelf life of ten years, and that if the evapotranspiration basin becomes saturated, it is necessary to leave it still for a while. There is another basin built next to the first one, and she only returns to use the first when the saturation levels are adequate. 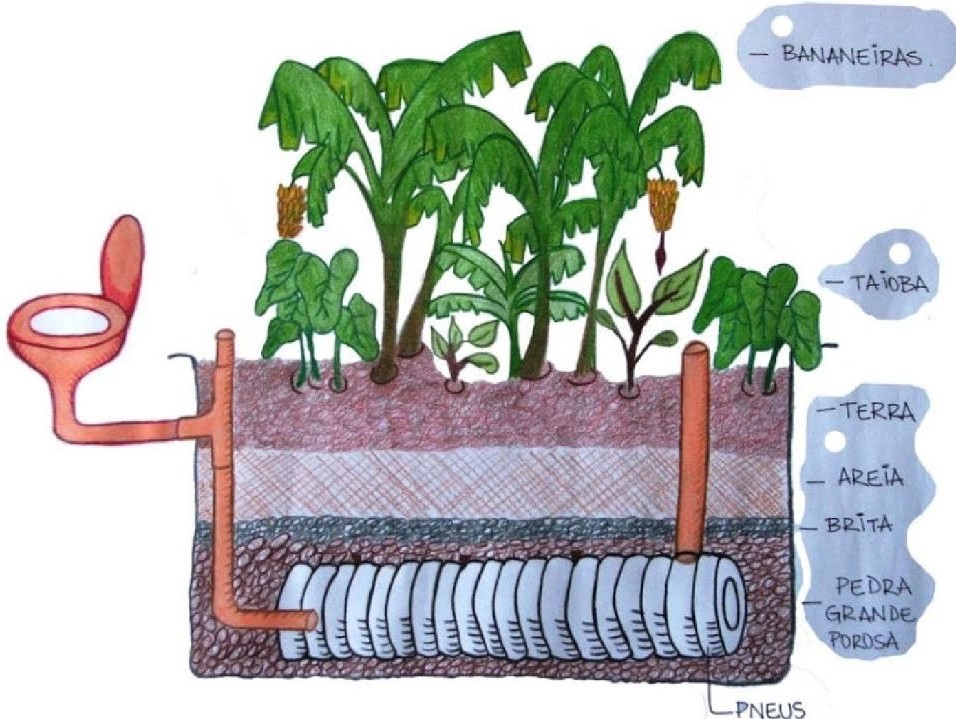 “Since the beginning of the pandemic, 67 sinks have been installed in streets, alleys and entrances of Morro da Providência, also with locally-produced soap. Prior to this, I’d already been making the soap in smaller quantities, with some 60 liters of it being distributed to neighbors. During the pandemic, I started making [more] soap, and people liked it and supported us, so I started making it on a large scale in the Wash Your Hands project. The soap is made with used cooking oil which would otherwise be thrown into nature or end up in public sewers. So, people don’t need to donate anything, not even the oil. Each family receives 2 liters of soap per week… but the project is more for environmental awareness… To get soap for the week, they need to keep the packaging from fabric softeners or 5 liter bottles of chlorine disinfectant, because they will need them for the 2 liters of soap. Every month, we produce an average of 2,140 liters of soap; we have already surpassed 11,000 liters produced and distributed since the beginning of the pandemic. There is a family that has kept the same bottle for six months! If a family gets 2 liters of soap a week instead of buying it, that family alone stops throwing four plastic bottles into nature each month. It is an environmental awareness project, both due to the reuse of packaging and the oil, whose usage we stretch out and make good use of, since sewage here is a very big problem.”

Fábio Miranda, excited by the previous presentation, began his speech by saying: “I will try to show how super powerful our network is… The future is living in community, it is the great potential of today.” Miranda, from the Favela da Paz Institute, based in Jardim Nakamura in São Paulo, is coordinator the Sustainable Periphery project that focuses on developing sustainable and functional technologies in urban peripheries. Miranda explained that they work with a variety of technologies, such as “laser cutters, 3D printing, solar energy and biodigestion.”

The Favela da Paz Institute seeks to leave a legacy for future generations by increasing sustainable technology in the region. In 2013, his project entered schools to propose technologies made with reusable and low-cost materials, such as “a flashlight made with soda cans, a cell phone battery and some LED lights.” From there, this knowledge began to circulate, spreading these new technologies across universities and peripheries and teaching various concepts in a relaxed and simple way.

In 2020, the Citizen Technology Laboratory project began. It aims to discuss and map the talents of the favelas and peripheries, and resulted in the creation of a community garden. “The garden works with solar energy and an automated irrigation system, [it is] designed by the young people of the project… I don’t have time or space, but I have organic lettuce produced vertically. Technology can work in our favor.”

Highlighting the power of networking, Mirando also spoke of a workshop held in partnership with Taboa Engineering and the Catholic Church’s Environmental Pastoral Committee of Rio de Janeiro, which worked towards the implementation of the low-cost biodigester, BIO21. Miranda also spoke of a trip he and Adler made to the Amazon rainforest in 2018 to set up a biodigester at the Active Forest Experimental Center (CEFA), which transforms waste into self-renewing energy such as biogas.

According to Miranda, “the coolest thing of all was receiving a photo of three young women who became interested in the topic, giving lessons on biodigestion in schools in their community… It is very nice to know that we planted a seed, that seed grew and today it continues to germinate… carrying forward biodigestion and sustainable low-cost technologies.” Adler complemented Miranda’s speech by declaring: “It’s the people’s engineering!”

To conclude his presentation, Miranda reiterated the importance of being part a network, stating: “the [Sustainable Favela] Network is very powerful and it’s cool to be here today, learning a little more about the projects and realizing that we can act, even with the pandemic and at a distance, and make things happen.”

Watch the Virtual Tours of SFN Water and Sewerage Projects:

This is the fourth article in a series covering the events of the 3rd Annual Full-Network Meet-Up of the Sustainable Favela Network, which happened online on November 7, 2020.