This January, RioOnWatch launched a year-long reporting project, “Rooting Anti-Racism in the Favelas: Deconstructing Social Narratives About Racism in Rio de Janeiro”—to debate racism from the inside out, with a focus on favela voices, with community journalism as the means to provoke the urgent dialogue we need. Follow the series here on RioOnWatch.

Over the course of 2021, RioOnWatch will publish weekly illustrated articles, videos, and podcasts, primarily by Afro-Brazilians or favela residents. The anti-racist action has three axes: memory, present day, and future—which relate to the concept of Sankofa: San (to return), Ko (to go), Fa (to seek, to get)—to lay out the debate about racism and race, in order to offer a detailed, multidimensional and intersectional view of how structural racism works in Rio de Janeiro, from the personal to the systemic and analytical, with the goal of transforming society.

An Adinkra symbol—a group of ideographic symbols from the Akan people—the Sanfoka is represented by a bird that flies in forward motion while with its head pointed toward its tail, carrying an egg (the future) in its beak. It appears realistically or in a stylized form, in a format that looks like a folded heart. 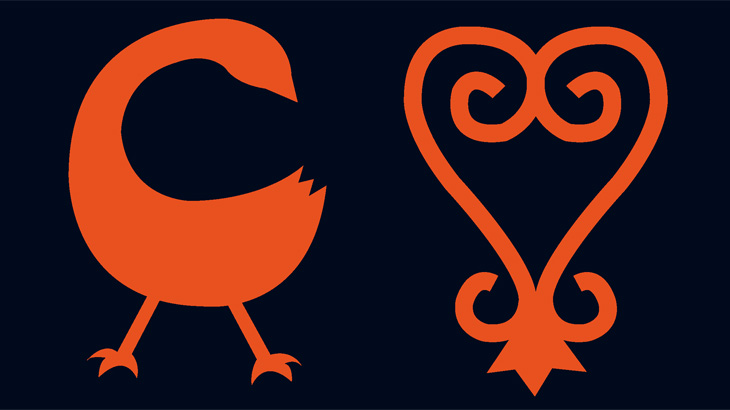 The symbol represents a return to acquire knowledge and wisdom from the past, through a search for the cultural heritage of our ancestors, in order to build a better future. With this, it could serve in the Brazilian context to reflect the fundamental force of recuperating ancestrality and confronting historical and current struggles and difficulties, so we can in fact achieve a better society. Molded into iron and fixed in windows, gates, and house doors all over our region, the Sankofa symbols remind passers-by—who know how to read them—that it is not taboo to return to the past to recuperate what is forgotten. In fact, this act is fundamental in order to achieve a better future for us all.

It is important to realize that what is not named cannot be recognized in order to be combated. Racism in Brazil is in the structures of society, including in silence and in euphemisms in news coverage about social inequality.

Because of this, transitioning from the obvious to the complex, including diverse dimensions and perspectives, we assume the commitment over the course of 2021 to publish 48 bilingual media products—in the format of texts, audiovisual reports, podcasts, and illustrations—as a public anti-racist action, one each week.

It is necessary to take anti-racist attitudes, to perform the role that befits us, to support and raise voices, amplifying them with strategic actions, in order to alter power relations so that, ultimately, they serve the interests and needs of all Rio de Janeiro residents.