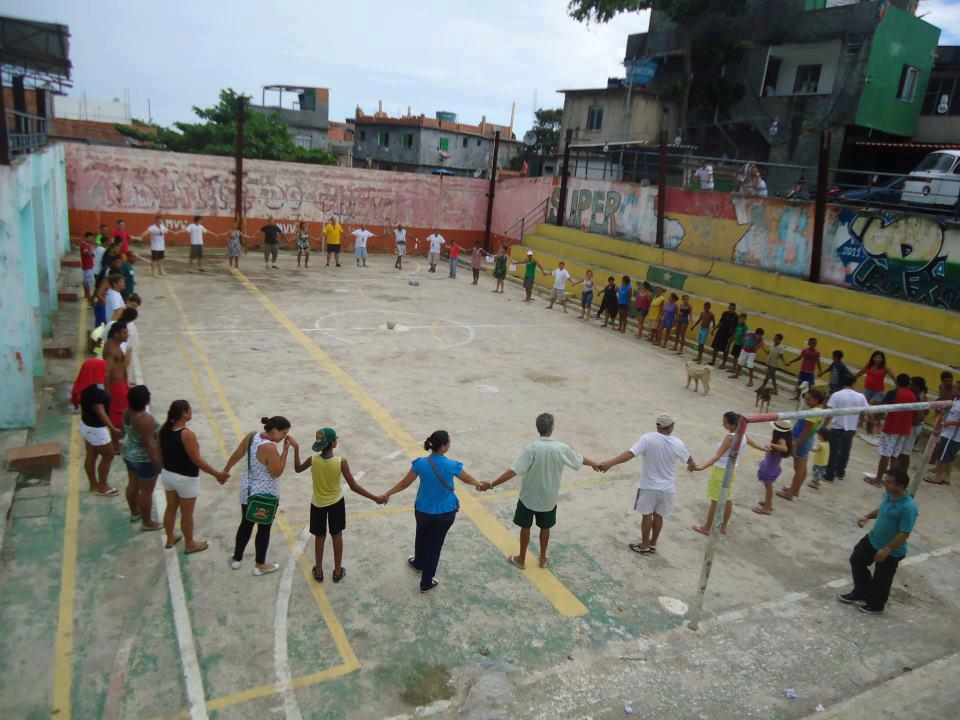 Like in a country town, the news in Vidigal at first travels in whispers. So it was with the information about the location of the UPP’s (Pacifying Police Unit) new base: “They are saying it will be in the square in Alto.” But it wasn’t until December 11th that the residents’ fears were confirmed: in a meeting at the Residents’ Association for the Village of Vidigal (AMVV), Captain Fabio and Lieutenant Dantas officially announced that the only recreational space in the community would be given up for a police base with an auditorium.

While they hurried to mobilize, contacting the appropriate authorities and informing residents, the Association was taken by surprise, less than two days later, on the morning of December 13th, with the presence of a backhoe loader. Without a mandate, prior notice, or the presence of the Captain or Lieutenant, officials from City Hall and several policemen were there to carry out the sad job of razing the old soccer field, where many of those raised on the hill grew up playing ball.

The Last Public Space in the Favela

Since the Pacification Unit’s installation in Vidigal and Chácara do Céu on January 18th, 2012, the police have occupied a building in the middle of the hill, known as “Biquinha.” It was the former site of the POUSO (Post for Urbanistic and Social Guidance). They also took over part of another public building, the Vidigal Cultural Center, built by residents in a mutirão (collective action project) during the 1980s, to house vocational courses. Obscuring the façade with its colorful mosaic, there is now a huge blue sign with the name “UPP Vidigal.” 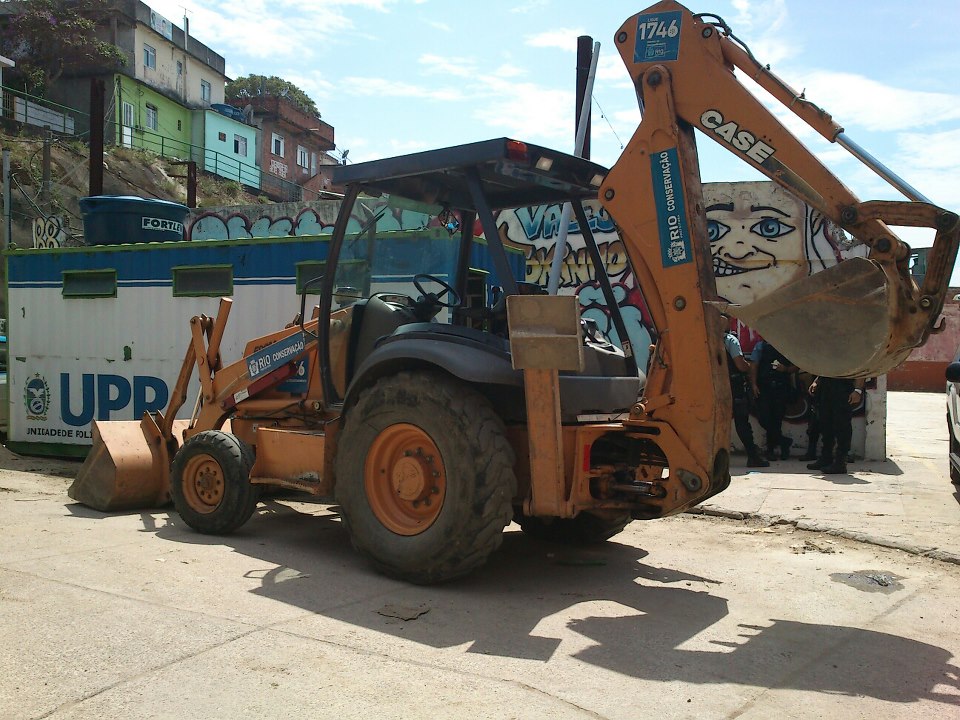 So the presence of the machinery up above rang out with a sound like: “enough.” The mobilization began on the Internet and continued on to the streets. Gradually, residents were gathering. The machine was halted and the mood was calm. In contact with agents from City Hall, the Association had succeeded in stopping the demolition. Even so, many residents and children were approaching. The idea was that they would start playing ball on the square, thus preventing the entry of the tractor.

But, like a magic trick, seeing the mobilization, someone shouted that the action was authorized. Corporal Péricles reported that he had orders from the Captain to arrest anyone who tried to stop the demolition. Arranged in front of the square’s entrance, the police formed a blockade to prevent the entry of residents.

The tractor was turned on, as was the desperation of those who were there. Fearful mothers took their children away.

While I, as the reporter for the website and blog Vidiga!, filmed the action with my cell phone, some residents tried to move in front of the tractor. That was when the cops started, at first, to prevent the advance. And then, to act with brutality.

I remember seeing the former President of the Association, Deley Ferreira, immobilized and with legs in the air. Then Sebastian Aleluia, Doquinha, Vice President of AMVV, also came under assault. 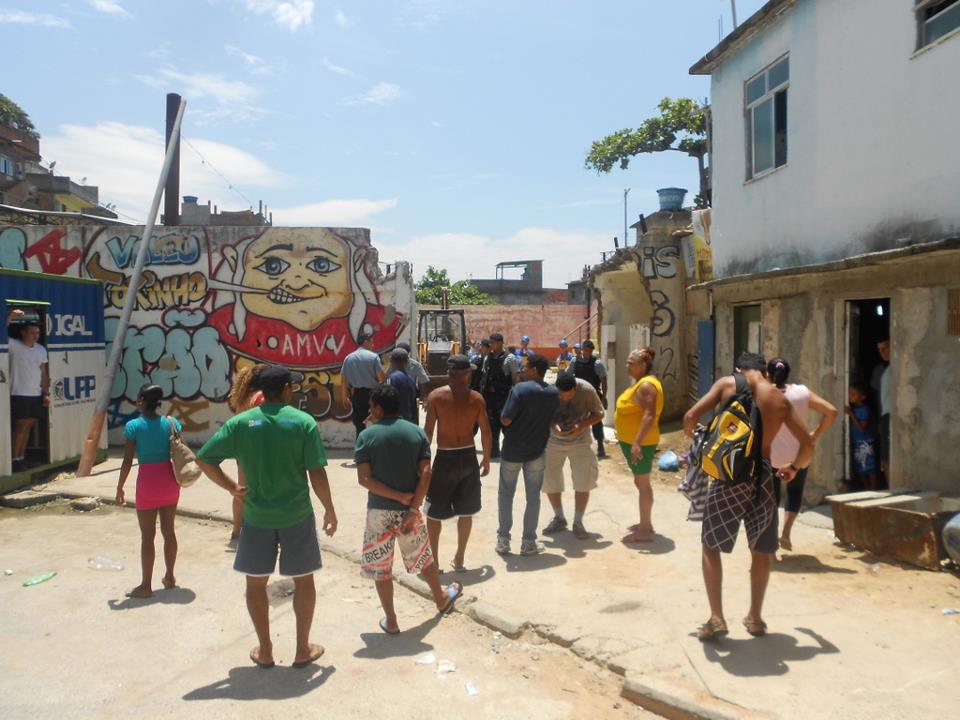 That’s when, from behind the camera, I yelled to the group something like: “This will be the end of the UPP in Vidigal!” I’d said this because until then there had not been any conflict with them, and there they were tarnishing the image of a unit known more for having so little to do on this quiet hill, than for confrontation with residents. Nothing happens in Vidigal, other than fights between couples or drunks. All the other conflicts are being created by the government’s desire to demolish homes, topple recreational areas, and residents’ fear of being displaced.

The aforementioned Corporal Péricles, who was not in the midst of the turmoil but at my left-hand side, looked at me angrily and hit me. The slap that came ended up knocking my cell phone to the ground. Not satisfied, he grabbed my hair and kicked the phone, which had already been broken.

When I saw the shattered device, I thought of the tractor coming up, the terrified locals, the slap, and the damage. And I advanced on him. Of course, as a journalist unprepared for any corporal combat, I couldn’t hurt him. Soon someone called me and I let him go.  I walked away, and even being far away from them, I was arrested, pinned down, handcuffed, and thrown in the back of the van.

At the police station, I was charged with Contempt for Authority and bodily injury. According to the report filed by the corporal, I had struck first, pushing him and then punching his left eye. Again according to him, my phone had fallen on the ground as he restrained me. 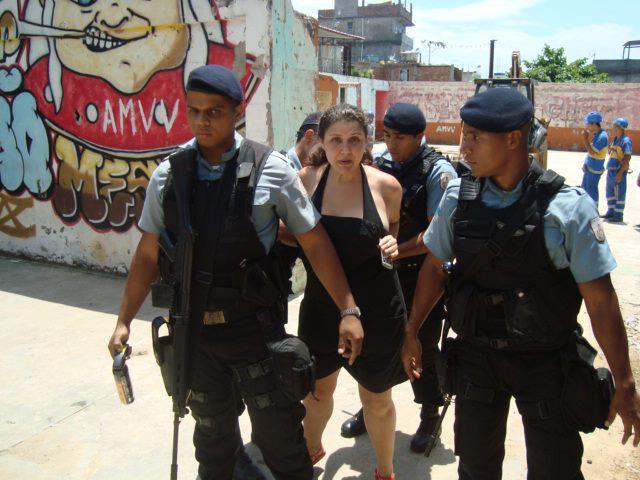 While I was being arrested, an official from the city called the police to advise that the demolition had been blocked. The UPP Vidigal apologized to the AMVV and asked that residents not publish anything, a request which was not accepted. Immediately, photos and a videos were posted on the Internet, and a great wave of solidarity formed.

The officer was dismissed from service in Vidigal. Already the AMVV was racing against time to bar the demolition by getting a warrant. It is also preparing, together with the popular mobilization website Meu Rio, a public consultation for the residents to select a use for the space. Following that, an architect will be called to draw up plans and everything will be presented to City Hall.

Deciding it doesn’t want an end to that old grass field, which over time was turned into a gym and today is dilapidated, Vidigal presents its letter of emancipation. As state representative Marcelo Freixo told the newspaper O Dia, “that over there is no senzala (‘slave quarters’).”