In times of sadness, anxiety and uncertainty, six diverse and multidisciplinary artists hailing from the favelas of Complexo da Maré have been a beacon of light in the darkness. In a project known as Becos (Alleyway), these young creatives have shown the power of art to transform realities and their ability to deal with serious, pressing issues with lyricism and creativity.

Becos—referencing the narrow, winding paths in favelas—is a four-part audiodrama in the form of podcast episodes divided into four acts, available on all major platforms. Realized in partnership with People’s Palace Projects and Maré NGO Redes de Desenvolvimento da Maré, Becos sits at the intersection of fiction and reality, poetry and prose, painting a unique picture of life in Maré. As we hear in the podcast’s introduction to the project: “[Becos] is a collective sound piece, bringing stories from the alleys; stories of denunciation and of resistance. Stories which also bring healing in the laps of our mothers, grandmothers, stepmothers, and older sisters, creating a path with each piece of advice.” Becos will shortly be available in English.

‘Render unto Caesar the Things Which Are Caesar’s, What is Xangô’s, He’ll Take Himself!’

The six voices in the story, played by MC Martina, Rodrigo Maré, Thais Ayomide, Matheus de Araújo, Thainá Iná, and Jonathan Panta each tell a different life story, yet their narratives are intertwined and inextricable. Together, they embody the power of the collective, both in resistance and in celebration. They are art in all its might. The very same art that saves them every day, as they state in Becos: “What saves me is my art! So, today I say out loud, like a prophecy, like an ebó: none of my people shall die today!”

The four episodes, with a combined running time of 60 minutes, offer up intersectional dialogues on race and racism, ancestrality, blackness, police brutality, collectivity, and much more, all set against the backdrop of Maré. 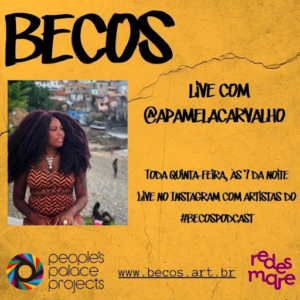 As a way to discuss the social, cultural and political pertinence of Becos, every Thursday since January 14, Pâmela Carvalho from Redes da Maré has been interviewing the voices in the project via livestreamed events on the Redes da Maré’s Instagram page. On February 4, MC Martina came on to discuss the topics of Raciality and Favela, a topic that permeates the entire project.

In a laid-back, yet extremely educational environment, the two inspiring women spoke for nearly an hour about their life experiences, societal observations, aspirations and frustrations. The most powerful messages stemmed from their shared experience of being black women from favelas in Rio de Janeiro.

“We’ve never been considered human beings, let alone artists,” expressed MC Martina, whose work, as put by Carvalho, seeks to “bring visibility to the narratives and artistic production of black women from favelas in particular.” 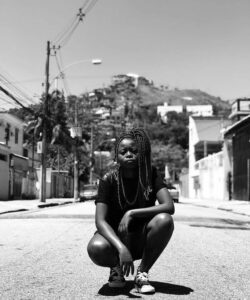 At 22, and born and raised in the Pedra do Sapo favela in Complexo do Alemão (though recently-turned resident of Maré), MC Martina is a rapper, cultural producer, slam poet, and creator of Slam Laje, the first spoken word battle in Complexo do Alemão. She explained how her introduction to slam poetry, and more broadly to artistic expression, gave her a platform which was not previously afforded to her: “everything I say [now], I’ve always said, but never before did people stop to listen to me.”

A crucial topic of discussion at the event was that of society’s categorization of black people and favela residents, a trope which only serves to perpetuate racist stereotypes. “People don’t recognize our plurality… we’re very diverse… people think all black people are the same. We’re really not, man,” expressed MC Martina. To reinforce this, Carvalho commented on the two frequently-used stereotypes for black women: the mulata, whose body is objectified, or the black woman who is there to serve others, typically overweight and darker-toned.

“If society is not moved by tragedy, by pain… I try to move them through art.” — MC Martina

On this idea of plurality, this time bringing in a geographical dynamic, MC Martina commented that her experience is that of a black body, a woman’s body, in Rio de Janeiro, in the Southeast region of Brazil. She explained that she could not comment on what it was like to be a black body in the Northeast or the South. “They’re other lived experiences,” she added.

For MC Martina, her body relates to a number of different movements: women’s movements, black movements, favela movements, LGBT movements. “I am, therefore I do,” she expressed, explaining how her work, and her body, engages with all these groups. “It’s not a career choice, it’s your life.”

@mcmartina_ talks about the verses she created for #Becospodcast. What about you? Have you listened to this sound piece about day-to-day life in favelas and its various characters?

Check it out! Becos is available on all digital platforms and also on its official website (link on the bio) #podcast #spotifybrasil #favela #arte #potencia #poesia

Elaborating on the question of black bodies in society, the two women spoke at length about the normalization of violence towards black people, rendering them mere numbers. “They were 80, they were 11, they were numbers,” is a line from Becos which Carvalho drew upon and which served as a rich point of departure for the following part of the dialogue.

“Our bodies have become trivialized. The death of our people has become trivialized,” added MC Martina, drawing on the example of Ana Clara Machado, a 5-year-old girl who was shot on February 2 in Monan Pequeno, Pendotiba, in Nitéroi. She also cited the cases of Eduardo Jesus de Ferreira, Marcos Vinícius and Ágatha Félix.

Another key topic is that of glamorization of black bodies. Carvalho pointed out that one of the struggles of being a black artist in Brazil is the public’s tendency towards romanticization without really considering the reality of being black in Brazil. “We must never lose sight of who we are, because today we can be on stage at Rock in Rio and tomorrow in the Getúlio Vargas Hospital,” she highlighted.

“Not a single adapted screenplay, from Netflix or a soap opera, could describe what it is to be a black body in this decade,” is an impactful line from one Becos episode, or act, as they are called in the project. On the schism between film and television portrayals and lived experience, MC Martina lamented that the black actors in Malhação or other Brazilian soap operas are always cast as either police officers or criminals. “This is really serious. It’s important to talk about this because it can destroy people’s minds,” she expressed.

With mental health issues affecting the lives of so many, Becos goes a long way to address issues related to mental health in Maré. It was produced alongside the international research project Building the Barricades, which has as its aim to investigate the mental health and well-being of Maré residents, demonstrating, as Thaís Cavalcante wrote in an article for Maré de Notícias, that “art is also a research tool.” 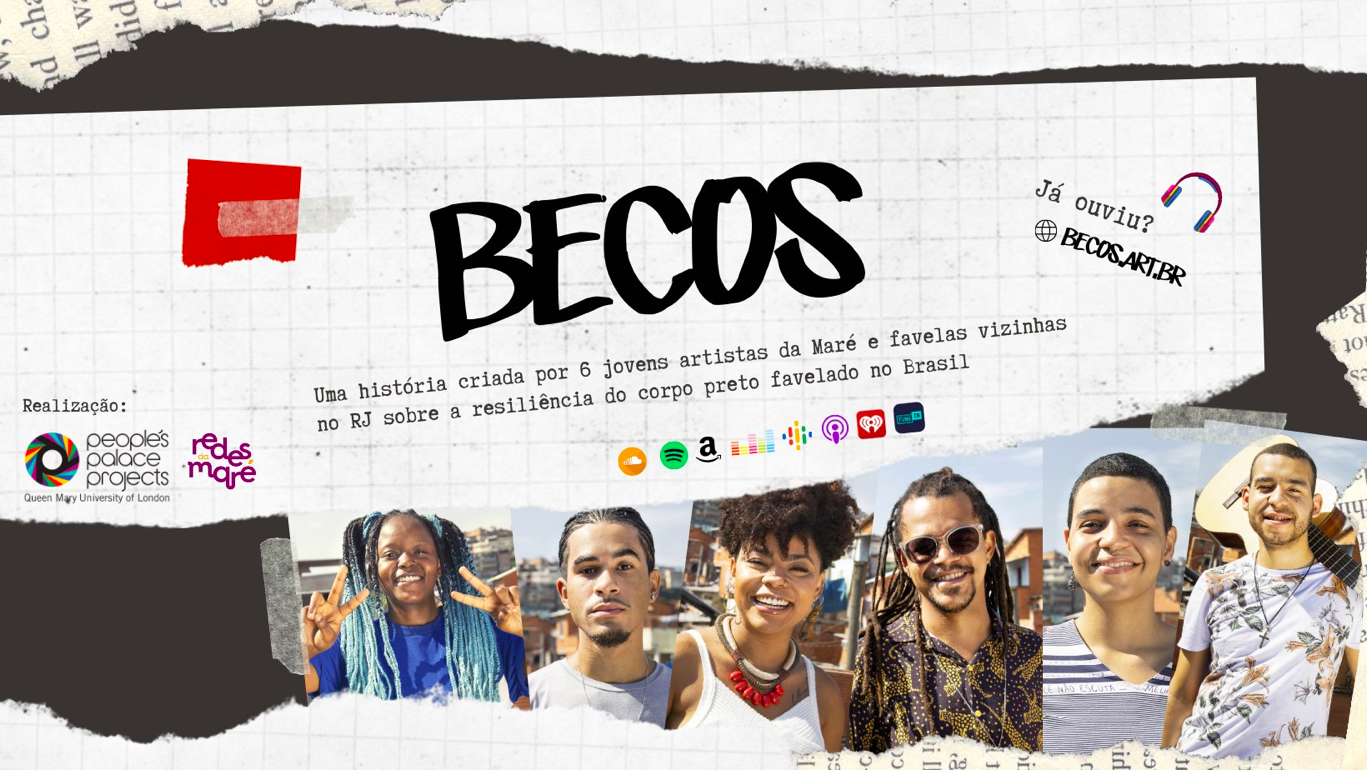 ‘And Can One Get Used To It? There Is No Victory When Life Is Unjust!’

At one point during Act IV of Becos, torrential rain, typical of Rio de Janeiro summers, floods the favela. Neighbors help each other, but a feeling of helplessness cannot help but arise, and so they shout: “What can I do? Nothing! Nothing! Nothing! Nothing!” In the midst of the storm, this scene presents the listener with the experience of many residents of Rio’s favelas who, despite living in Rio de Janeiro, a city known all around the world for its beaches, have never seen the sea themselves.

In a flooded Maré, after heavy tropical storms, a child named Martim goes after his ball alone in the water, and some youngsters his mother generally tells him to keep his distance from, retrieve him from the rain. Speaking with the people who took him in, Martim asks, as the torrential rain falls around them: “How big is the sea?” Some there had been to the beach several times, others only once, decades ago when they were children. And yet, they all shared the same opinions on the multisensory, overwhelming experience of witnessing the infinity of the sea: an experience which further sparked the curiosity of the child who had never had the opportunity to feel those things.

Permeating the entire podcast are scenes narrating everyday experiences: family life, religion, understanding yourself through your surroundings, reclaiming ancestrality, recreating Complexo da Maré through poetry—all things based on life experiences. At certain points throughout the four podcasts, names of streets and locations in Maré’s many favelas interject the poems, making Maré itself pave the way for poetry. It is fascinating how poetry and space become interwoven; to some extent, the territory is (re)constructed through the construction of the poem.

There are also verses which relay very powerful, emotive accounts of armed violence in favelas. We hear stories about violence against children, about the risks they face in favelas due to the State’s neglect. There is also the tale of Dona Drica, a character present throughout the podcast. She is the mother of a poet, Emmanuel, a math teacher, favela resident, who was murdered by the police. The character of Dona Drica goes from housewife and mother, to victim of a State crime; she becomes a pillar of resilience and resistance in her locality. The entire favela mourns her loss, embraces her, so that even in an unthinkable moment like this, she doesn’t feel alone. On Emmanuel’s birthday, friends of the family hold a party in memory of the late teacher, reading in unison one of the fallen poet’s unpublished works—a scene in Act IV, which is as beautiful as it is riveting and unique. This is one of many and indeed one of the clearest examples of the philosophical maxim exposed in Act I: “not a single adapted screenplay, from Netflix or a soap opera, could describe what it is to be a black body in this decade.”

Only a piece made by black artists and favela residents would be able to create an image so layered, so rich in emotions and sensations.

“Hollow poets have no echo. Opache spirits. What I do is a consequence of what I am.” — MC Martina

Listen to the Podcast Becos here: