Approximately 20 people are camped out in front of the municipal government building in Cidade Nova, in the Central Zone of Rio, since February 22. Protected by the shade of a tree, they take turns sleeping along the sidewalk, on a few improvised mattresses and blankets. The group are beneficiaries of social rent payments that have been delayed and altogether suspended since last month. Without receiving the R$400 (US$73) monthly benefit, some families have been evicted from their homes.

“When the benefit started to come in late—it used to be paid between the 5th and the 15th of the month—we met with the families that were being evicted to go make our claims at the Municipal Housing Secretariat because there was no date scheduled for payment,” says Rodrigo Moreira, leader of the group. He and the other people camped out were residents of the Comunidade Telerj, which is how an occupation of approximately 8,000 people living in the abandoned Oi/Telerj site in Engenho Novo, in the North Zone, became known. At the time, the violence employed in forcibly evicting the residents just weeks before the World Cup, in 2014, drew international attention.

The promise made by then Mayor Eduardo Paes of building social housing on the land was never fulfilled. Since then, some families were registered and included in the social rent program. According to Moreira, the group of former Comunidade Telerj residents normally received the benefit in the first half of the month. February’s payment, however, was only received on March 5. This delay caused the eviction of at least 18 families in this group alone. Rodrigo, his wife and four children were also evicted.

The situation is even worse for Thaynara Souza, who found out her benefit had been been put on hold. A solo mother of two, a five-year-old boy and a one-year-old girl, she is unemployed and was unable to pay rent on the house she lived in with her two children in a North Zone community. The delay caused Souza’s eviction and she has been camped out outside the city government building since February 22. When other families started to receive the benefit almost a month late, and she had not, her concern turned into despair.

“Everyone’s social rent started coming in, so I went up there [to the Secretary of Housing] to find out why mine hadn’t. The clerk said everything was OK with my registration, and that all I had to do was show up on the scheduled date to revalidate it. I did the revalidation, did everything exactly as I was told; I came here, got all the information. And, still, no payment. So, I set out to find out why I hadn’t been paid and they said it was because it was under analysis. So, while it’s under analysis, I don’t get paid. They say I have to wait, but I haven’t been given a date,” says Souza.

When she found out the benefit had been suspended, Souza says she tried to explain her situation but was advised by city employees not to bring the children into it. “I went there and informed them that I have two children; that one is staying with my mother and that the other is with my grandmother. But due to health issues, they can’t watch over the children anymore. I told them I’d have to stay on the streets with the two kids and they told me not to mention my children, not to bring them up in my dealings about the social rent because that wasn’t the way to go about it. So, I asked them: how do you expect me not to talk about it when I’m the mother of two, bringing up her kids alone? Cutting off or blocking my benefit, they are automatically putting me out in the streets with two children,” said Souza.

The call for revalidating the registrations of families receiving social rent began on February 1. Since then, program beneficiaries have reported long waits for payment, besides some registered recipients having had their benefit put on hold. According to Moreira, who also leads the group of former Comunidade Telerj residents, during a meeting, representatives from the Municipal Secretary of Housing informed that the department is carrying out a reevaluation of the program’s beneficiaries. The information was confirmed to this reporter by the secretary itself, in a statement saying that “a thorough examination” is being carried out in order to “reevaluate benefits granted in the past years.”

Besides having the former residents of Comunidade Telerj camped outside, the city government building saw the intense activity of social rent beneficiaries last Tuesday, March 16, as residents of the former “Unidos Venceremos” occupation in Santa Cruz, West Zone, struck by a fire in January, came in seeking answers. The destruction of the site left 250 families homeless, with payment of the social rent beginning seven days after the fire. The benefit paid in January, however, was the only one received to date. 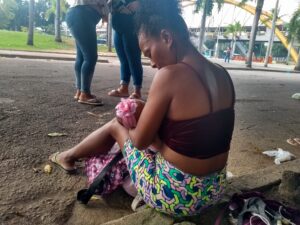 Carlos dos Santos, known as Paulista da Mangueira, complains about not getting any prior notice regarding the lateness and suspension of the payment. He used to live at the IBGE occupation, located in an abandoned Brazilian Institute for Geography and Statistics (IBGE) building in Mangueira, in the North Zone and repossessed in April 2018. Paulista recalls that, at the time, then Mayor Marcello Crivella announced the construction of social housing on the land, where residents of the occupation would be resettled. Construction never started, however, and social rent, which was supposed to be a temporary solution, became permanent.

Paulista has received the benefit for the past three years. This time, the long delay in payment resulted in his eviction. In order not to stay on the street, he started looking after a daycare center in Jacarezinho, in the North Zone, where he sleeps in exchange for his services. According to him, at least 15 of the IBGE occupation families are experiencing homelessness due to the delay. Of these, five had their social rent payment put on hold, like him. “Mine was cancelled. But I’m fighting it. I come here every day looking for an answer. I want to know why,” he argues.

Paulista revalidated his registration for the program on March 8 and was informed that payments would resume in a few days—which did not happen. When he went back to City Hall last Tuesday, the 16th, he was informed that his benefit had been cancelled. To try to solve the problem, he was instructed to return to the service station at the Municipal Guard headquarters, in São Cristóvão, to revalidate his registration, which he had already done on March 8. Paulista is physically disabled and has limited mobility. “They tell me to revalidate my registration with the promise that the benefit will be paid on Wednesday, on Friday… But the day comes around, and I still don’t get paid. Meanwhile, people are ending up on the street,” he says.

Questioned, the Municipal Secretary of Housing informed, through a written statement, that the revalidation of registrations “is mandatory and crucial to ensure the continuation of payments. Therefore, only beneficiaries who have completed the renewal or who have scheduled an appointment to do so are apt to receive the aid.” Regarding the suspension, the secretary advises that beneficiaries who had their social rent put on hold schedule an appointment to revalidate their registration. The deadline for revalidation is March 26. 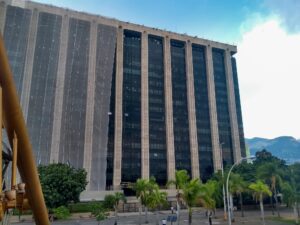 The secretary also informed that there was a reordering of benefit payments, leading to a change in the date of social rent receipt. “Previously, payments were made on two separate dates each month, including one group of beneficiaries at a time. But the calendar underwent an adjustment, and payments have been made on a single date since January, encompassing all duly registered beneficiaries.” The new, single payment date was not informed by the secretary.