The federal program’s dwellings are being constructed in peripheral areas without urban mobility, studies show. Click here for original article in Portuguese in O Globo by Alessandra Duarte and Carolina Benevides. 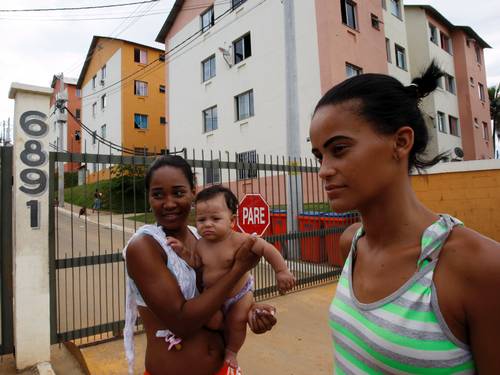 The federal program that became the hallmark of the Dilma government for housing, Minha Casa Minha Vida (My House My Life) is building many of their dwellings in areas without transportation infrastructure. Studies by urban planners indicate that the program reproduces the logic of older conjuntos (“housing estates”), such as Cidade de Deus and Nova Sepetiba, where the poor end up being pushed to locations far from, for example, the supply of jobs—and without a system of transport that accompanies this expansion to more distant areas. In Minha Casa, according to surveys by Coppe and IPPUR, both from UFRJ (the Federal University of Rio de Janeiro), the program’s houses have been built on the outskirts of metropolitan areas; this is because the construction companies for these projects, to have a profit margin, are choosing cheaper land away from urban centers. Yet this land has not been linked to mass transit systems.

In Rio, more than half the program’s units constructed between 2009 and 2011 are more than 30 minutes by foot from the subway and commuter rail. National data from another study by IPPUR show that, while 45 thousand of the units were built in the so-called hub municipality of the metropolitan region of each state—that is, the capital—58 thousand other units were built outside the hub municipality—which the research called the “periferização” (“peripherization”) of Minha Casa. The region where this process is most pronounced is the Northeast, where the number of units outside the main city amounts to more than double the number of houses in the central city.

“There would not be a problem with the issue of people living far away if they were to have mobility. But what we see in metropolitan areas of the country is that housing policy is not coordinated with mobility, nor is federal housing policy coordinated with municipal planning. All metropolitan areas, to a greater or lesser extent, are going in the direction of mismatch between housing and transportation. As housing policy is concerned with growing the economy, through creating jobs in construction, it does not bother with urban mobility,” says the director of the Observatório das Metrópoles, Luiz Cesar Queiroz Ribeiro, professor of IPPUR / UFRJ.  He cites the example of housing in France, built outside urban centers but in areas with access to mass transit. “The bus is not a high capacity mass transport; it should serve as a feeder system to mass transport spines, which are trains and subways. But, as is being done in this country, the bus becomes the main axis.”

The architect and urban planner who conducted the study at Coppe, Renato Barandier, stresses that the main problems found were access to transport and the locations with a higher percentage of formal employment. Most units, 60.4% of them, are more than a 30 minute walk from trains and subways. But when you look at the proximity to what the study calls a complete network of transportation (bus stops in addition to trains and subways), 25% of the houses are more than ten minutes from this network—and all of these 25% are recipients with the lowest incomes (0-3 minimum wages), revealing the inequality among the program’s income groups themselves.

“In Rio, two-thirds of the program’s units from this period are in the West Zone, which has poor transport,” says Barandier, noting that when he sees the future access to the transportation network, there are also problems, since almost half of the homes (45.5%) are more than 30 minutes from “systems planned or in deployment by 2016:  the four BRT lines, the Metrô extension of Line 1 of Barra and the LRT (Light Rail Transit) line in downtown Rio.”

A resident of Vivenda das Patativas, one of the Minha Casa complexes in the West Zone of the city, on Estrada do Campinho, Cristine Santos ended up losing her job in a market in Nova Iguaçu after moving to the development: “[My employers] thought that the commute would be too expensive. To get there, I had to take three buses.”

“My husband works in Barra; he has to catch a bus to Campo Grande, and another from Campo Grande to there. It takes more than an hour,” adds Carolina Arcanjo, another resident. “The bus comes here only until 11:30pm. After that, there’s just the van.”

Performed by Adauto Cardoso, Thêmis Aragão and Flávia Araújo, of IPPUR, another survey shows that for lower income ranges, most of the houses are being constructed outside the so-called municipal hub of each of the metropolitan areas—according to data from May 2010, while 45,064 units were built in the hub cities of the region, some 58,273 were located outside this central city.