This article is part of a series created in partnership with the Behner Stiefel Center for Brazilian Studies at San Diego State University, to produce articles for the Digital Brazil Project on human rights and socio-environmental justice in the favelas for RioOnWatch.

Since January 2020, residents of the Horto favela, in the Botanical Gardens neighborhood of Rio de Janeiro’s South Zone, has been involved in a new project. The proposed aim of Horto Natureza is to work towards the revitalization, maintenance, and conservation of the Macacos River, which cuts through the favela and its peripheral areas.

The project was only recently launched officially, but it has been a long time in the making. Roberto Fonseca, founder of the Horto Natureza project, worked on the Guardiões do Rio (Guardians of the River) program, in 2001, an initiative which trained community agents to work on the cleaning and conservation of rivers and canals. He explains that, since then, he has felt motivated to take better care of the environment of the community in which he lives. “In 2001 I was invited along with a few residents of the Horto favela to work for ‘Guardiões do Rio,’ a project by then-mayor César Maia. We needed work and it was a good opportunity. That way, I learned to put in practice everything that my parents had already taught me as a child: to clean our area and take care of what belonged to us. And, to make money doing that, was even better,” says Fonseca.

For a while now, following accusations that the favela was responsible for the pollution of the Macacos River, and the innumerable attempts to displace residents from the area, Fonseca has decided to act: “That was when I started to denounce the fact that the sewage leaks and trash did not come from favela residents but from the buildings and businesses [surrounding it],” he recalls. “When the ‘Guardiões do Rio’ project ended, I kept humbly cleaning up my area, but from 2018 onwards, I felt that more was needed; I felt the need to go back to rallying local residents and raising awareness to the fact that we need to take care of what is ours,” he explains.

The outline of the Horto Natureza project began to take form since then. The participants’ objective is to promote the region’s socio-environmental development, through educational actions and professional training. Fonseca explains that the actions developed range from the cleaning and maintenance of the Macacos River to rebuilding house walls and façades. Some collective actions are also dedicated to the organization of areas destined for waste disposal, with the aim of encouraging adequate collection and sorting.

The activities developed by the project are directly related to the history of the favela, which was born when enslaved people were brought to work on the building of the Botanical Gardens. Over the years, the community has maintained its knowledge and connection to nature, transmitted from one generation to the next, with support from workers and teachers in the neighborhood’s schools. Fonseca is a picture of this history. He was born and raised in the Horto favela, learning what he knows through his life experience.

“I studied in all the schools we have in Horto [Júlia Kubitschek, Capistrano de Abreu, Camilo Castelo Branco and Manuel Bandeira]. At the Camilo school we had a teacher who taught us everything about the local fauna: how to catch a snake, how to catch an animal without killing it. He was the kind of teacher who spent more time in the forest than in the actual school with students, and that’s where I learned everything I still know today. Mr. Walter! Anyone from Horto knows who Mr. Walter was,” Fonseca explains. He adds: “Whenever we found an insect or an animal that was different, we’d catch it and take it to him so he could classify it and explain about the species. Many of us weren’t even his students, but he always kept his classroom open even for those who weren’t students.”

Behind the project, which was put into practice by Fonseca and other Horto residents, is a long-standing struggle: the community’s right to remain in the area. By denouncing where the pollution of the Macacos River and the Rodrigo de Freitas Lagoon really comes from, the Horto Natureza project seeks to demystify the idea that it is favela residents who are responsible for polluting the Macacos River waters, which flow into the Rodrigo de Freitas Lagoon.

After these complaints, the Municipal Environment Secretariat concluded that the water utility CEDAE is one of those responsible for the river’s pollution. The company was fined R$1 million (US$190,000) for the irregular disposal of sewage in the Macacos River. On January of last year, the company had already been fined for the same reason. Besides CEDAE, the disposal of chemical products from a textile plant located on the river’s banks has also contributed to polluting the waters. According to Fonseca, after a series of complaints, the company took some measures and resolved the problem.

Since early 2021, various collective actions to clean the Macacos River have been organized, and Fonseca explains that people from different areas of the Horto favela have taken part: “A few from Grotão, a few from Caxinguelê, and we go down the river cleaning up.” Through these actions, the project aims to establish a dialogue with the Municipal Environment Secretariat of Rio. Eduardo Cavalieri, who is responsible for the secretariat, visited the area on April 17. 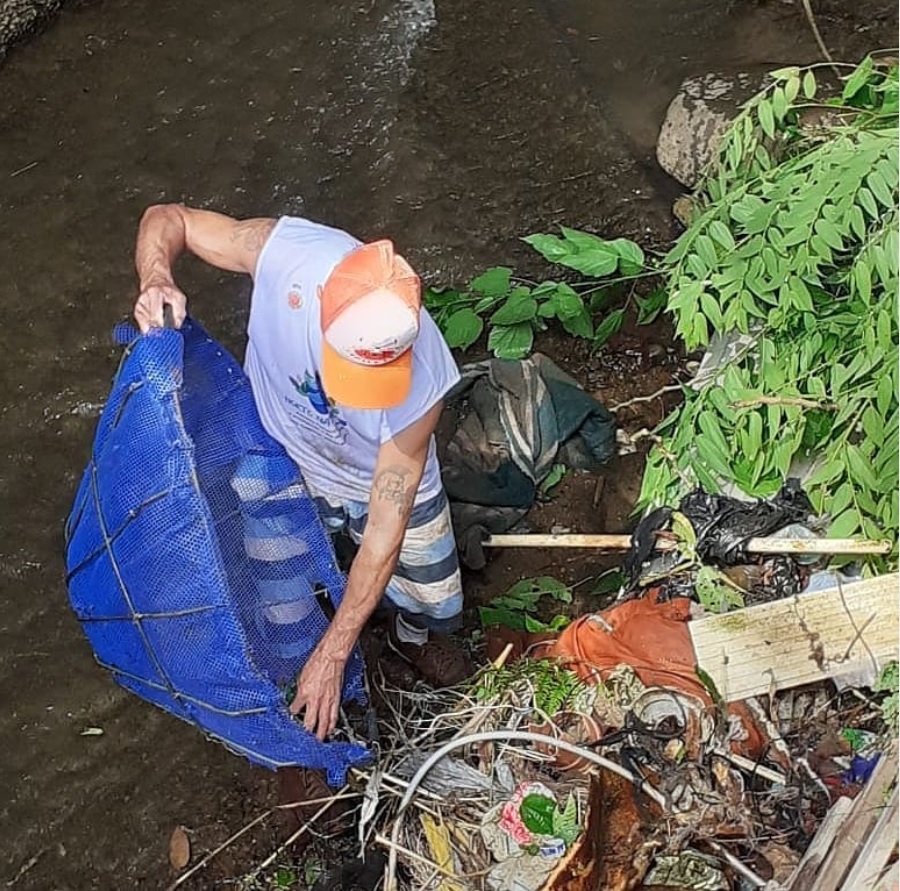 The project benefits from partnerships with the capoeira group of Mestre Mico Preto, an ex-resident of the Horto favela; the company IBS, a franchise specialized in high-performance cycling; as well as the support of community residents and the Horto Florestal Residents’ and Friends’ Association (AMAHOR). The Horto Natureza project is seeking more support and undertakes virtual crowdfunding campaigns with national and foreign supporters. In parallel, the project encourages a healthier space for the community by reinforcing the historical links families have with the environment.

In the future, Fonseca dreams of expanding the activities, creating space for community vegetable gardens, for the replanting of seedlings native to the Atlantic Forest, as well as mobilizing his neighbors to take part in the cleaning of the street which gives access to the favela, and in the maintenance of the jackfruit trees which grow on the side of the road. The intention is for the socio-environmental actions of the Horto Natureza project to involve children, teenagers, adults, and the elderly from Horto.

Once again, the favela shows that its life history is closely linked to the land, and the Horto Natureza project is a snapshot of this relationship.

About the authors: Emerson de Souza is a musician and socio-cultural activist who, since the 1990s, has taken part in cultural and political collectives such as Cambralha and Fome de Educação (Hungry for Education). He is currently president of AMAHOR, and a representative of the Horto Museum.

Taísa Sanches is a post-doctoral researcher in social sciences at the Pontifical Catholic University of Rio (PUC-Rio) and an activist for housing and the right to the city. She works with the Horto Museum and the Evictions Museum projects.