Favela grassroots movements launch an international campaign and attempt to stave off hunger amidst abandonment by public authorities.

Ten months after its launching, the Covid-19 in Favelas Unified Dashboard, a collaborative initiative to produce data on the reach of Covid-19 in favelas, came together with the Sustainable Favela Network* for its fourth press conference. Community leaders denounced the absence of public policies to combat the coronavirus at the municipal, state and federal levels. Brazil is living the second highest rate of deaths and infections by Covid-19 in the world, with over 430,000 deaths and 15 million cases since March 2020. During the “A Year of Losses! What is The Solution?” press conference, held on April 29, 15 favela leaders asked for the support of locals and from the international community via a newly launched crowdfunding campaign. They presented how favelas have been facing, with little aid from public authorities, death by coronavirus and hunger.

“Much more than an emotional speech, because I’ve wanted to cry here many times, I want to bring you a rational statement about what is going on now in favelas. An emergency aid payment of R$150 (US$29) or R$300 (US$58) [amounts paid by the Brazilian government’s emergency aid] for a family of four or five, doesn’t even last a week. Without having any kind of structure to back us up, we are forced to reprogram ourselves through a circular economy so that we can feed ourselves with dignity. It is extremely difficult to face this situation with an administration that is indifferent to the social tragedy that is unfolding.” — Anna Paula de Albuquerque Sales, Itaguaí Women Warriors and Social Articulators Association (A.M.I.G.A.S.) 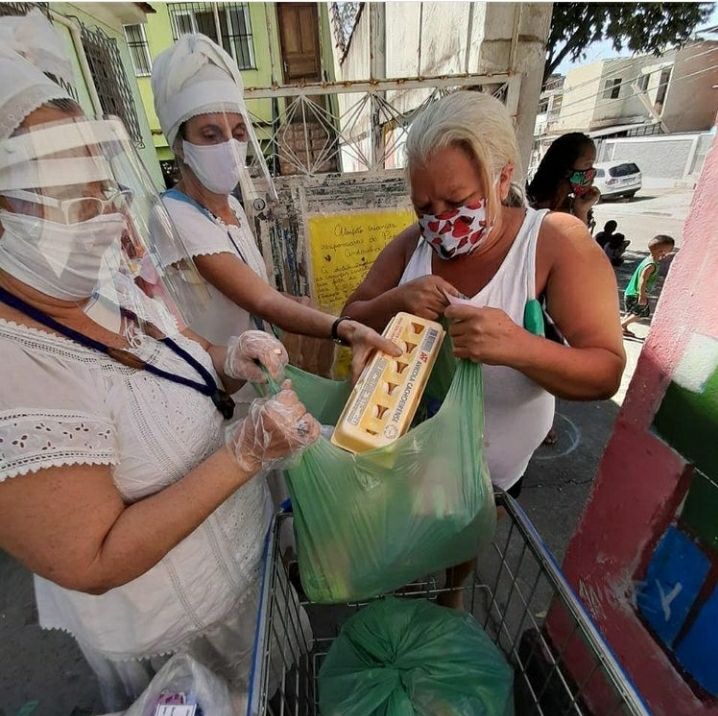 Food insecurity is experienced when one does not have sufficient access to food. Today, amid the pandemic, over 50% of Brazilians are living in hunger. Furthermore, there is nutricide, which happens “when people are forced to buy processed foods, which in the long run causes problems such as diabetes and cardiovascular disease,” explains Andressa Cabral, from Maré de Notícias, highlighting the nutritional vulnerability that many residents are exposed to, even when they are able to placate hunger.

Brazil had left the UN’s World Hunger Map in 2013, when only 3.6% of Brazilians were experiencing severe food insecurity, but returned in 2018, with 5% of the population at the level of severe food insecurity. With the pandemic, according to the National Inquiry on Food Security in the Context of the Covid-19 Pandemic in Brazil, carried out by the Brazilian Network for Research on Food Sovereignty and Security, 9% of the population is going hungry, which is to say, 19 million Brazilians.

On the other hand, a survey conducted between November and December by Food for Justice researchers from the Free University of Berlin in partnership with the Federal University of Minas Gerais (UFMG) and the University of Brasília (UnB), showed an even greater increase in hunger: 15% of the Brazilian population is experiencing severe food insecurity and 12.7% moderate food insecurity, meaning people running the risk of no longer eating due to lack of money.

At the April 29 press conference, favela grassroots movements and numerous other organizations confirmed the increase of hunger and their struggle to reduce it in the face of the government’s inaction.

“Donations are getting increasingly hard to come by, we haven’t been able to raise funds. A mother came in asking for basic foodstuffs and I had nothing to give her. I could only offer her a few products. People are splitting up their children between friends’ houses because they have nothing to eat at home. I talked to a boy who was less than 12 and asked him why I hadn’t seen him in a while. He told me he’s been working at a carwash and has been sleeping there.” — Diocélia Gavão, Sowing Christ’s Love project, Pavuna

A study by the Data Favela Institute showed that 68% of favela residents did not have enough money to buy food at least once in the two weeks prior to the poll.

“Favelas live in struggle and grief since their origin. We are being segregated and we have no guarantees of social rights. Most people who are dying in the pandemic are poor, favelados and black. Here in City of God, one person dies every day and we already have a total 142 dead. We had a protest for which no one [from the media] showed up to denounce we had one person a day dying here. We have been left completely abandoned.” — Iara de Oliveira, Alfazendo, City of God

The lack of emergency aid and the current rates of structural unemployment limit community organizations’ ability to help. “The government’s policy is to work against people—it is cruel and genocidal. It not only makes a recovery impossible, but it seems to be doing exactly the opposite,” says Douglas Heliodoro from the Peripheral Connection Collective in Rio das Pedras.

Last year, the Brazilian government launched a financial benefit to provide emergency protection in the face of the crisis caused by the coronavirus pandemic. However, from the beginning, the amount of R$600 (US$115) was considered low in light of families’ needs and the increase in food prices in the midst of the pandemic. For three months, between January and March 2021, the federal government stopped paying the aid and families were left completely unassisted. Unemployment has reached 14.4 million Brazilians, the largest number since 2012.

In March, the government approved that aid payments be resumed, but at an even lower amount: between R$150 (US$29) and R$375 (US$72). According to the Inter-Union Department of Statistics and Socio-Economic Studies (Dieese), in 12 months, that is, when comparing values from March 2020 and March 2021, the price of basic food products increased in all Brazilian capitals. The average price of a basic foodstuffs parcel in Rio de Janeiro is currently R$612.56 (US$117.40). 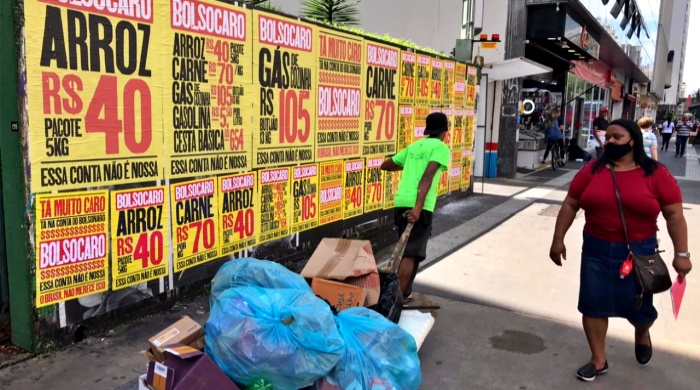 Since the beginning of the pandemic, community institutions have been forced to intensify their actions and increase their efforts exponentially, taking on the role of public authorities. “What is happening is unbelievable. We, as civil society, are doing the government’s part and we are paying a very high price for the absence of public policies,” says Ana Leila Gonçalves, from the Social Fusion Center, in Mesquita.

Community grassroots movements believe that the policy of death perpetrated against favelas is explicit and operates a sinister game of chess: you either die of Covid-19, of hunger or from a gunshot, since police operations have not ceased in communities, even in the middle of the pandemic.

“With this pandemic, we had to do our best to assist people, to go after vegetables and leafy greens. We felt like it was our moral obligation not to let these people go home without assistance. In trying to support these families, we go into other areas, other communities and see the precariousness of the service. I wouldn’t even say precariousness of service, I would say nonexistence of service.” — Cleide Jane, Missão Resplandecer Association (AMIRES), Duque de Caxias, Baixada Fluminense 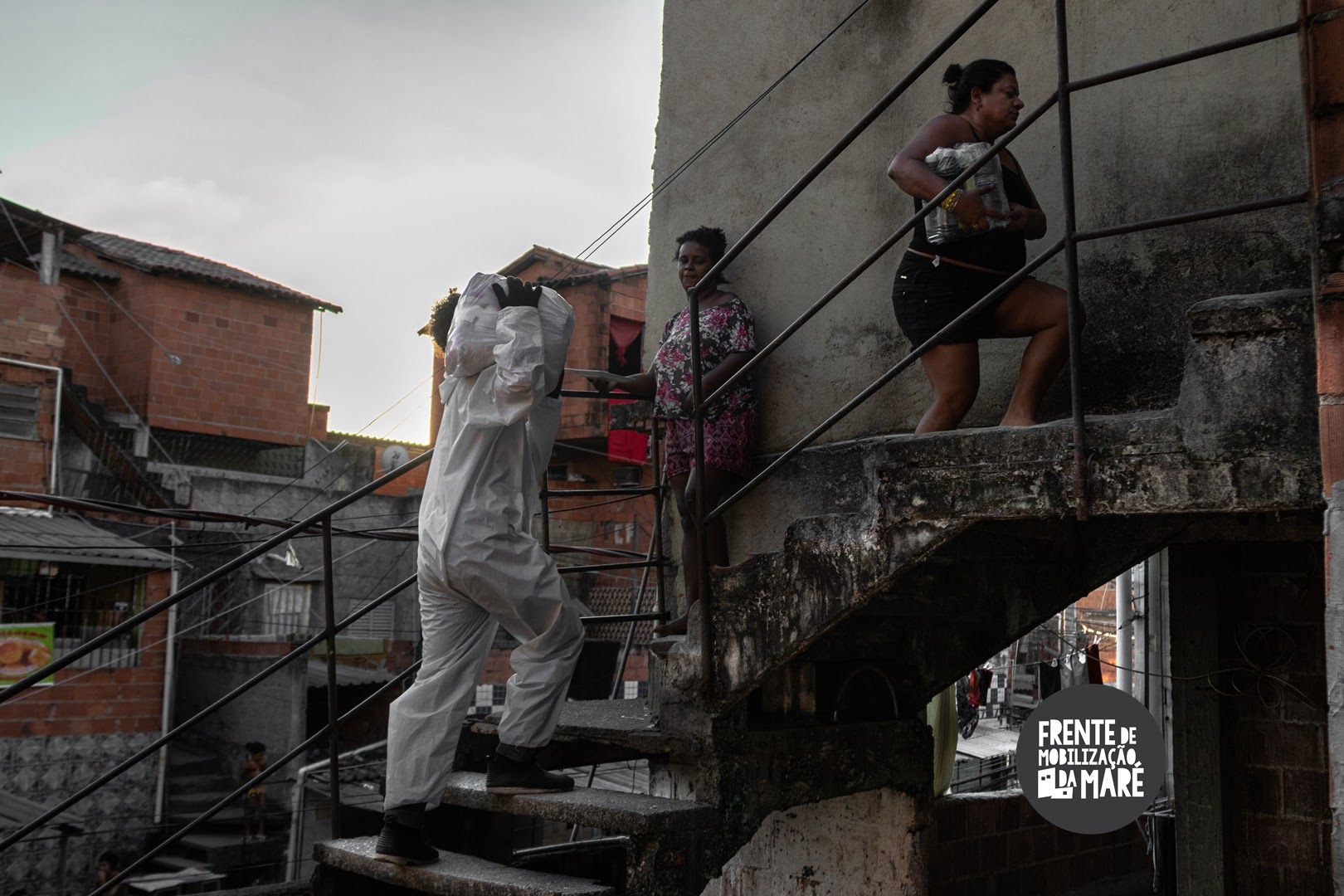 Cleide Jane, whose organization assists people living with HIV, believes community organizers never had the option of social isolation or to stay home because, “when many closed their doors,” organizers “kept their doors open,” otherwise “people would die of hunger, not of Covid.” She therefore vents, “I don’t know when community leaders will be included in the priority list for vaccination, because we do need it.”

In January, 21 Unified Dashboard collectives and 27 other organizations called attention to the urgent need to vaccinate the favela population. And also as a means to fight hunger. In the letter “Vaccines for Favelas, Now!” they registered critical statements about the side-effects of the health and economic crisis of the pandemic on the favelas of Rio’s Metropolitan Region.

Kádina Bastos, from the Doing Magic with Fabric Collective, says that the only solution is the vaccine: “I choke up when I talk about this. I, too, have received requests for basic foodstuffs, but the biggest shock was losing one of our seamstresses at the end of last year, when she died from Covid. It happened very fast. If the vaccine had arrived when it was supposed to, last year, who knows if she, and so many others, would still be with us?”

Immunization in Brazil is still slow. So far, only the elderly have been vaccinated and, in some cities, people with comorbidities recently began to get their shots. The balance of vaccination against coronavirus released by the Health Secretariats on Friday, May 7, points to 34,914,631 people already having received the first dose of the Covid-19 vaccine. The figure represents 16.49% of the Brazilian population. However, only 8.3% of the population has received the second dose and is completely immunized. In Rio de Janeiro, in total, 2,450,422 people have been vaccinated with the first dose, which represents 14.11% of the state’s population, according to the vaccination map on the G1 portal.

According to community leaders, in addition to death by Covid-19 and the violence of starvation, residents of Rio de Janeiro’s favelas have also been having difficulty burying relatives killed by the coronavirus or being able to mourn with dignity. “There is a significant underreporting of burials, especially in poor communities, first of all due to health security, of protocols to prevent contamination. But there is also the issue of people from these communities not being able to locate loved ones who died, who were buried in a disorganized, uncontrolled way, without any kind of monitoring or inspection by agencies such as the Holy House of Mercy, which is one of the entities that oversees burial processes,” reports Fabio Leon, journalist with the Grita Baixada Forum.

The Covid-19 in Favelas Unified Dashboard was created in response to the lack of public data on Covid-19 in favela territories. The Dashboard is realized through a highly participatory methodology that, given the lack of mass testing in most communities, recognizes that data collected through a qualified local base are most accurate.

Having local sources as a starting point, the Dashboard began assembling its database in July 2020 and has been adding new data sources every week. More recently, it incorporated a Zone of Influence by Post Codes (CEPs) methodology, identifying post codes that best reflect each favela, starting with the most populous ones. Using CEP data, the Dashboard now covers 268 favelas, six of them in neighboring municipalities, in particular Itaguaí.

“The data collection carried out by this Dashboard, bringing together public and community sources, contributes to a diagnosis that is closer to reality, since the lack of data provided by the city government makes it difficult to secure the fundamental information needed to assess the situation… The difficulty in accessing health care, the addresses that are more difficult to georeference, are factors that contribute to a higher lethality in neighborhoods with more favelas.” — Renata Gracie, Vice-coordinator, Health Information Laboratory, Fiocruz

There have been more deaths in Rio de Janeiro’s favelas than in 164 countries. Today, May 14, the panel reports 44,996 cases and 4,702 deaths in the favelas of the metropolitan region. The Unified Dashboard covers 66% of favela households in the city of Rio.

“People were shocked because we couldn’t even buy hand sanitizer because of the high price caused by the increased demand [for the product].” — Geiza de Andrade, socio-environmental educator, Vila Kennedy

*The Sustainable Favela Network, the Covid-19 in Favelas Unified Dashboard and RioOnWatch are all initiatives of Catalytic Communities.