In March 2020, the World Health Organization declared the new coronavirus a pandemic. Staying at home, maintaining social distancing, and washing our hands frequently were some of the recommendations made to contain Covid-19. At first glance, such measures seem simple, but for people experiencing homelessness or for those lacking adequate housing, they are unattainable measures. In addition, according to data from the Zero Evictions Campaign, at least 14,301 families have been evicted throughout Brazil since the beginning of the pandemic and another 84,902 remain under threat of eviction, making them even more vulnerable to the virus.

To ensure their populations’ right to health and safety, several countries enacted a moratorium on evictions during the pandemic. However, in Brazil, after almost a year and a half of pandemic, Proposed Bill 827/2020, which would ban evictions until the end of 2021, was vetoed by President Bolsonaro.

In this context of a health, economic and social crisis, We Effect, an NGO that focuses on adequate housing, and urbaMonde, an NGO that promotes the social production of habitat, both members of the CoHabitat Network, conducted the Global Study: Community-Led Housing in the Covid-19 Context, in order to evaluate how different types of housing were affected and how they dealt with the pandemic’s impacts on the lives of their residents, especially in terms of community resilience.

The term Community-Led Housing refers to housing models that rely on resident participation in housing project management, or even construction, emphasizing community coexistence and collective decision-making. These projects’ primary objectives go beyond land and housing being managed in a collective and non-speculative way by a community or cooperative organization. They include the guarantee of adequate housing rights and the fulfillment of the land’s social function. Among the various existing forms, the following were the study’s focus: Housing Cooperatives, Community Land Trusts, Collaborative Housing, and Intentional Communities.

Housing cooperatives emerged at the end of the 19th century and spread across the world, adapting to different contexts. They are characterized by the joining together of people dedicated to housing production and management, in order to ensure they remain economically accessible and evictions are avoided. In general, housing cooperatives can differentiate themselves based on their construction mode, financing, and whether real estate is rented or owned by residents, among other aspects. However, We Effect, one of the organizations leading the study, works with a specific model of cooperative association, known as the Mutual Aid Housing Cooperative (or CVAM according to its Spanish initials). The model was tested in Uruguay during the 1960s and is currently applied in several countries. Its characteristics are self-management and community control, collective ownership of the land and housing units, mutual aid to build homes and infrastructure, and multidisciplinary technical assistance to guide and empower residents.

Known the world over, Community Land Trusts (CLTs) emerged in 1968 in the United States in the context of the African-American struggle for civil rights. Today, approximately 500 CLTs exist around the world, and have even been implemented in informal settlements, such as the Caño Martín Peña in San Juan, Puerto Rico. The CLT model is characterized by the separation between land and building ownership. The land belongs collectively to a community organization—the CLT—sometimes created but always controlled by residents, while each resident owns, leases or rents their home (or other structure). The goal is to provide adequate and economically accessible housing in perpetuity, guaranteeing security of tenure and strengthening the community. Currently, Catalytic Communities (CatComm),* in a partnership with civil society organizations, community leaders, universities and public agencies, is working to establish a pilot project in Brazil. To learn more about this initiative, visit the project’s website.

Collaborative Housing and Intentional Communities take various forms, with projects aimed in general at providing housing to specific groups such as the elderly, LGBTQI+ population, religious groups, ethnic minorities, or students. In addition to managing spaces collectively, residents often share the same values and interests. In some projects the housing price is adjusted to each resident’s income, enabling the inclusion of residents with financial difficulties.

Between September and November 2020, 1,047 participants from 72 countries answered a questionnaire to identify good housing practices during the pandemic. Some of these participants were also chosen to be interviewed and provide additional details about their experiences. 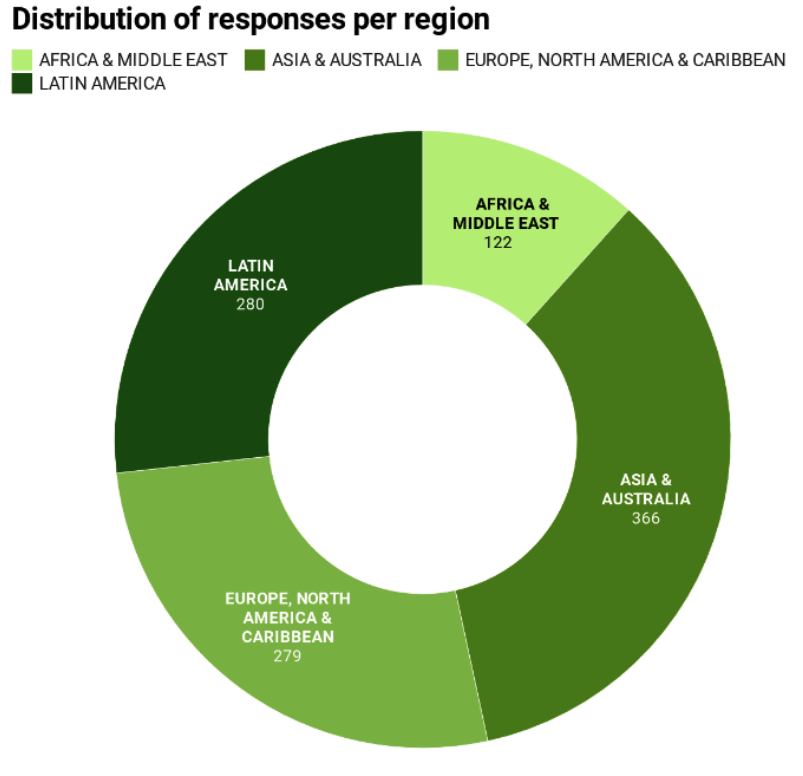 In order to analyze the relationship between different housing types and the extent to which their residents were impacted by the Covid-19 pandemic, participants had to indicate the nature of the dwelling in which they lived: fully paid individual properties; individual property currently being acquired; private rental housing; public rental housing; borrowed housing; community land trust; housing cooperative; or irregular land ownership. The study tested the hypothesis that “Community-Managed Housing initiatives allowed their residents to collectively organize self-help, defend their rights and prevent forced evictions, and to develop other resilience mechanisms in response to income loss and reduction due to the Covid-19 pandemic.”

The study focused on the following aspects: health and economic impact, forced evictions, and community organizing to face the pandemic.

Regarding the spread of the virus, 80% of participants reported positive Covid-19 cases in their cities or towns between February and July 2020. Of these, 62% said the positive cases were in their nearby districts, such as in their streets or neighborhoods. Concerning the impact on the local economy and employment, around 90% rated it moderate or high. Regarding the impact of the pandemic on personal income, 42% said they lost more than half or all their income (Figure 13).

To offset the pandemic’s economic effects, many governments offered public aid, whether in the form of financial subsidies, rent collection freezes, or reducing water and electricity costs. However, as shown in Figure 14, on average, only 20.2% of participants received some kind of housing expense assistance.

Forced Evictions in Times of Covid-19

As a consequence of the economic crisis caused by Covid-19 and lack of public aid, many individuals had their housing situation affected. Private landlords, companies and public agencies carried out evictions in several countries, exposing the population to the virus, without offering adequate resettlement options. In addition, the study’s authors mention that public policies granting payment extensions for rent, water, electricity, and gas bills, utilized in various countries, are of a transitory nature and eventually families will have to pay their creditors.

As far as the study participants, on average 48% had difficulty in covering housing costs. When analyzing the responses by dwelling type, housing expenses were a greater burden for those dealing with an irregular land tenure situation (83%) and for participants with government subsidized rent or living in public housing (62%). For those living in Community Land Trusts, only 13% had difficulties with housing costs. Also: participants living in housing cooperatives or CLTs were the only ones who claimed not to have received any kind of eviction threat or, as shown in Figure 22, be evicted at all.

“Knowing that I own the building and that I have a surface right on the collective plot makes me feel safe. The CLT guarantees that no one will make me lose my home.” — resident of CLT Caño Martín Peña, Puerto Rico

Community Organization to Tackle the Pandemic

Neighborhood networks played a key role in fighting the pandemic, with 82% of participants supporting their relevance. According to survey replies, several community initiatives were established to address issues such as food security, school instruction and infection prevention. Additionally, respondents reported social organizing through WhatsApp groups to offer help with childcare, psychological support or grocery shopping for elderly neighbors. Several income-generating activities were also cited, such as support to local businesses or the creation of solidarity funds.

Although the vast majority of participants agree that neighborhood networks are essential, there is a possible correlation between the dwelling type and the tangible participation of residents in such networks. According to the study, both participants who had illegal land tenure and those living in a collective ownership arrangement tended to have a higher participation rate in community organizations as well as in neighborhood initiatives during the pandemic. In the case of CLTs, 80% of respondents living in this type of dwelling organized themselves in solidarity with their neighbors in the context of the pandemic (Figure 24). 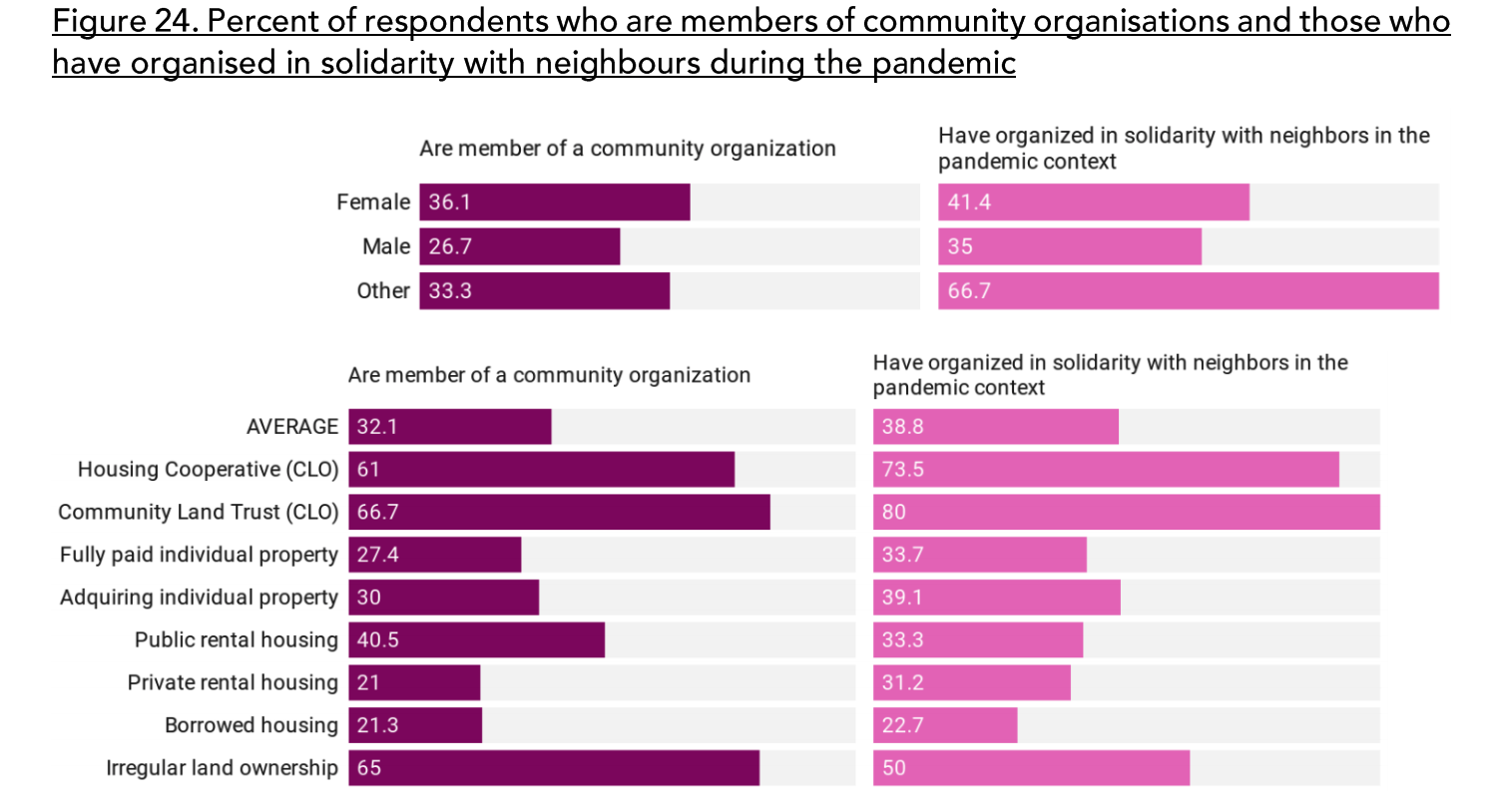 The study concluded that Community-Led Housing initiatives, such as Housing Cooperatives, Community Land Trusts, Collaborative Housing and Intentional Communities, are more resilient during times of crisis, such as the Covid-19 pandemic. Regardless of the kind of impact experienced during the pandemic, residents of Community-Led Housing were able to benefit from the organizational structure already established in their communities to deal with the situation.

“We were able to make better informed decisions. We are also used to making collective decisions, which is not always the case when you share a rented house with roommates.” — resident of the Neds Housing Co-op, Nottingham, United Kingdom

Compared to irregular housing situations, borrowed or rental housing, and even fully paid individual properties, such models offer security of land tenure, even in situations where residents lose their income. This is due to the community-led and collective-ownership characteristics of these models, which provide greater capacity for mutual aid as well as access to negotiation and assistance from banks and local authorities. Some examples include unusual measures, such as collective mortgage payback or monthly payback that is proportional to income. Some initiatives also embrace security funds and savings collectives, which in addition to meeting basic needs and ensuring the survival of families during crises, also enable the creation of income-generating activities.

The study concluded that in such collective housing arrangements, conditions are more conducive to solidarity growth and cooperation development. In most cases, residents decided to live together and/or endured long housing struggles or community structuring processes that brought them closer and allowed them to get to know each other better, generating greater trust and allowing more effective decision-making responses in times of crisis.

One last benefit mentioned in the study are the support networks derived from community initiatives. In addition to sharing spaces, residents share tasks and provide emotional support to each other. In this way, they avoid total isolation, stress and depression.

“(There is) mutual solidarity, financial, emotional, and organizational support. As a group, loss of earnings and loneliness can be overcome together” — resident of Mietshäuser Syndikat, Kassel, Germany

However, the authors state that for such models to thrive, it is necessary that local and national governments and authorities contribute public policies that ensure the legal structure, financing, and access to land for Community-Led Housing initiatives.

To summarize, the study proves its initial hypothesis that initiatives such as Housing Cooperatives, Community Land Trusts, Collaborative Housing and Intentional Communities “promote individual and community resilience to the social, economic and health impacts of the Covid-19 pandemic” and insists that such efforts be encouraged to make cities more inclusive and for future crises to be faced more effectively.