This year, the 6th edition of Black July—an initiative aimed at strengthening the fight against militarization, racism and apartheid in Brazil and across the Global South—brought the theme “Not from Gunshot, Hunger, or Covid! The Favela Wants to Live!” with live broadcasts through Black July’s YouTube channel and Facebook page, due to the coronavirus pandemic. The international articulation consisting of twelve entities, peripheral movements and collectives, was supported by three organizations: Global Justice, FASE and the PACS Institute. 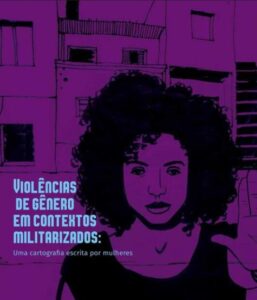 During this 6th edition, a livestreamed event on Women on Demilitarization was held on July 28. The event saw the participation of their authors and was mediated by Beatriz Virgínia, from the Maré favela-based NGO CEASM. During the talks, the authors offered a perspective on feminine, favela bodies. The event marked the release of two publications.

Gender Violence in Militarized Contexts: A Cartography Written by Women was realized in partnership with long-established NGO FASE (Federation of Organs for Social and Educational Assistance) in Rio de Janeiro; the Rio de Janeiro State University’s (UERJ) Urban Research Center and the State University of Campinas’ Center for Gender Studies PAGU/UNICAMP. The publication emerged from meetings centered on State violence, held between 2016 and 2017.

The second cartography launched during the event, The Strength of Women: Accounts of the Militarization of Life, was organized by Maré journalist and popular communicator, Gizele Martins, and includes accounts of women from the favelas of Rio de Janeiro, Palestine, Honduras and Mexico. The book was produced in partnership with the Institute of Alternative Policies for the Southern Cone (PACS).

Mônica Cunha, founder of Movimento Moleque and member of the Black Coalition for Rights, instigated attendees on the importance of demilitarization, given black bodies are treated with so much disregard. With this reflection, Cunha opened the event, which welcomed popular educators and communicators, activists, researches and members of several collectives, among them: Érika Batista, a Maré resident; Gizele Martins from Maré 0800; Valdirene Militão of the Ricardo Barriga project; Jessica Lene of LabJaca; Buba Aguiar, from the Fala Akari Collective; Marcelle Decothé of the Marielle Franco Institute and the Rio de Janeiro Youth Forum; Michele Seixas of the Brazilian Articulation of Lesbians and the Popular Collective of Women from the West Zone.

Each talk described how militarization affects black favela women in a singular manner, making them more vulnerable. The impacts of militarization on the lives of women—the main theme of the cartographies released during the event and of each participants’ addresses—was at the center of the “Women on Demilitarization” event. During the conversation, women recounted the impacts they have suffered and continue to suffer due to militarization in Brazil.

Érika Batista, co-author of the cartography Gender Violence in Militarized Contexts: A Cartography Written by Women, is also a professor of chemistry and resident of Nova Holanda, one of the communities that makes up the Maré favela complex. She retold the experience of publishing a book that was the culmination of nearly five years of research: “We built the cartography in 2017. It was a really constructive process, even if the topic does open up many old wounds. During the meetings, I always felt stronger; I had the sensation of not being alone in this process. We, members of the group, are all peripheral women and we feel comforted by this. The topic still hurts us today. And that’s what makes the fight against a system that oppresses us and the launch of this primer so important.” Batista explained why militarization and gender are directly linked:

“We, women, are on the front line in this context, and militarization has an even stronger impact on the lives of black peripheral women. And people suffer other types of violence that originate from but that go beyond militarization. Bringing forth this discussion is extremely difficult, and it is us, women, who are approaching this topic. While we were working on the cartography, our concern was with vulnerability, since women are always the ones who expose themselves. Not only is it a physical impact, but also a mental one. Many women are in therapy trying to deal with psychological suffering.” 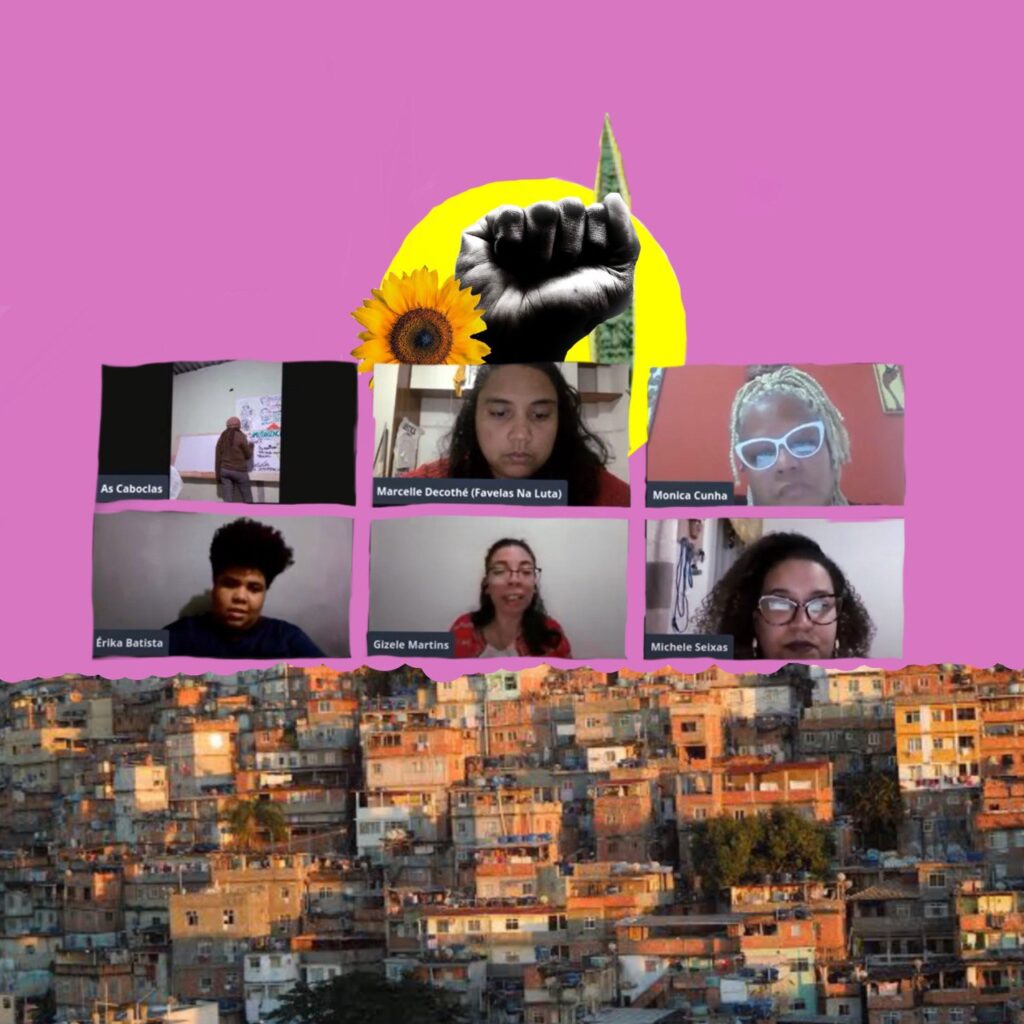 One of the women who has felt that pain in her body and spirit is Mônica Cunha. At the launch, the co-founder of Movimento Moleque, created 20 years ago, recalled the 31 years of the Mothers of Acari movement and the sad memories and scars left by militarization. Cunha is the mother of a victim of the State: her son Rafael da Silva Cunha was killed on December 5, 2006. This human rights advocate turned her grief into a personal fight and, a member of the Black Coalition for Rights, today she defends black lives:

“I’m in the struggle to fight racism, to demand real human rights and to ask for the end of militarization. I got to know the worst side of militarization with my son being released from prison and, then, with his murder. We become enslaved by the pain, we get ill, and then we have to find strength to keep on living. I praise the cartography work done by you. I followed it closely and this work is extremely important to show that the lives of black women matter, that our uterus matters, that we gave birth to create families, not a workforce.”

Cunha’s activism started a lot earlier than the assassination of her son, Rafael. When he was 15 and fulfilling mandatory socio-educational measures at a unit of juvenile detention with the General Department of Socio-Educational Action (DEGASE), in Rio de Janeiro, Cunha asked that the mothers of detained teenagers arrive early on visiting days. From that moment on, these mothers started to read together the Brazilian Statute of the Child and Adolescent in front of DEGASE—particularly those passages that deal with youth offenders.

Along the same lines, Marcelle Decothé, from the Favelas in the Struggle Movement, returned to her own master’s thesis in public policy and human rights, defended in 2019. Hailing from Greater Rio’s Baixada Fluminense, Decothé authored the study Cruel Baixada: A Social Cartography of the Impact of Militarization on the Lives of Baixada Fluminense Women showing the historical process of dehumanization experienced by Afro-Brazilians. She explains:

“We are living an expansion of hopelessness in Brazil and the discussion has been raised by women. Militarization isn’t solely found in the realm of the objective, in the armored trucks driven by police; it’s also in the subjective, in the changing lives of women, whether it has to do with their children, with sexual harassment, or racism. In other words, militarization affects women in a central way… In the 1940s, 1950s and 1960s, favelas demanded social policies, public policies; favelas wanted water, housing, sanitation… not public security. It was all about our right to work and to have an income. In the 1990s, this agenda changed. Public security became a huge demand. Thus the relevance of this discussion. We have to understand that we need to demilitarize not only public security, but also culture, healthcare, education, our daily lives.”

Gizele Martins emphasized how militarization has a subjective impact on the lives of women living in favelas and peripheries. A journalist and community communicator, she organized The Strength of Women, published by PACS, which tells of the impacts of militarization on the lives of mothers from Rio de Janeiro and others places in the world such as Palestine and Mexico. Martins asks:

“I always question: why is it that the suffering of black women isn’t shown in the media?”

The event to launch these publications will also be remembered for the graphic art intervention realized by the Popular Collective of Women from the West Zone. The painting was broadcast in real time during the event. At the end of the exchanges shared by the authors of the works, artist Saney Souza presented the graphic facilitation containing art which represents the core message of the live event: demilitarize the daily lives of women now! At the end, Saney Souza recited a poem she wrote during Black July.

About the author: A graduate from the Federal University of Bahia (UFBA), journalist Camila Fiuza hails from public schools and is a member of the Northeastern chapter of the Mothers of May. A black, peripheral woman who fights for human rights and against racism, she has contributed to community radios and worked for Record TV Itapuã and Band News FM radio, in Salvador.