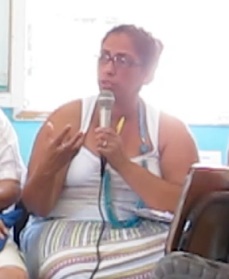 Cidade de Deus, Rio’s most famous West Zone favela, was made (in)famous thanks to the book and international blockbuster by the same name, City of God. The community today is occupied by a Pacifying Policy Unit (UPP). Here we interview Iara Oliveira, a CDD (as the community is popularly known) teacher and political activist. Iara is coordinator of Alfazendo, a community-based NGO in Cidade de Deus. Alfazendo’s focus is literacy for community residents of all ages, but they also serve as an advocacy organization and provide general educational opportunities and enrichment for the community. Mostly self-educated, Iara has built her career as a teacher and political activist for over 30 years and has seen Rio de Janeiro and the community evolve dramatically. She is undeniably passionate about her community, and dedicated to improving the lives of the people who live there. We sat down with the Alfazendo coordinator to learn more about her career and history of political activism.

ROW: How long have you lived in the Cidade de Deus?

IO: For all of my existence! I was born in Cidade de Deus, I’m a daughter of Cidade de Deus. I have been here for all my 46 years. I was even born in my mother’s home, when there were no hospitals nearby.

ROW: When did your involvement with politics and democracy start?

IO: I became involved with social movements in the community through the Catholic Church when I was very young, around 14 or 15. 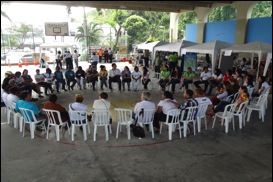 ROW: Is there a specific thing or event that inspired you to get involved with the democratic process?

IO: My mother came to Cidade de Deus in the flood of 1966, and we went through really hard times. We were hungry and the Catholic Church visited houses to provide assistance. I began doing these visitations. I grew up with the local priest, Father Julio. He would always say, ‘you can’t live with hunger’ and it was just like that. We didn’t live in hunger anymore. And then we had to organize ourselves so that others weren’t living in hunger anymore either. This was how I was raised, I grew up listening to this. Father Julio began to provide support to my family when I was 10 years old. And since then, I have always been involved with social movement groups.

ROW: What activities have you been dedicated to?

IO: I’m a teacher by profession, I taught people how to read for 13 years, I was a literacy teacher. Alfazendo was the first literacy school in Cidade de Deus. I gave access to popular education. I work a lot to encourage discussion of local development, the discussion of public policy, and regulating politics and economics. We fight to guarantee our rights. Therefore, I’m a researcher in the area of local development and participatory methodology. So I’m basically all over the place. Here at Alfazendo, I work with institutional relations and team-building. We have helped build the CDD Local Development Plan. Wherever there is work involving local and community development, I’m there.

ROW: Could you tell me about the Alfazendo program?

IO: Alfazendo is a community-based organization founded by residents and former residents who are educators by profession. We began by implementing a pre-vestibular course (college entrance exam preparatory course) for black and impoverished residents of the community, and also literacy training for adults. In our 15 years, we have taught 3-4,000 people how to read.

ROW: What is your greatest success?

IO: I don’t believe in success, I think success is only a word. I believe in collective work. I’m not a person who is in this world to try to be a success; I am here to leave something for people. I am very… collaborative, everything with me is collaborative, so I’m not searching for success exactly, I’m looking for a better life for me, for the people in my life, and for the people who are from where I am from. So, my greatest success, I think, is not to need or want to have success. You must be mixed with people.

ROW: Tell me about your experiences with mobilization in relation to politics in the community?

IO: We are a reference in popular education in Cidade de Deus. And as for outside CDD, we discuss public policy in relation to education and local development. Here we are an institution where people can always come and ask a question: what does this change? What does this transform? So, my participation is always to be fighting and guaranteeing rights for the people here.

ROW: What are some aspects in your life that have altered because of the political system? Were these changes positive or negative?

IO: There is a social movement that has returned, but it took a step backwards with the politics of the government and the UPP. I think the UPP is a policy that is not for the public security of the people, it is more like a big show and it didn’t result in anything but the weakening of social movements. Today, institutions don’t discuss politics, today you are seeing the UPP doing sports, health care, etc. and this is not politics. The police are not here to be fun or cute, the police are here to guarantee rights. I look at the police as an authority, and this authority must come with rights. It can’t stick its foot in people’s doors. Everyone is behind the UPP but what is happening today in Rio is a big mess. What are the roles of authority? The energies today are lost.

There is a difference between an NGO with a community base and an NGO that was created outside the community that doesn’t have the same experience. An NGO created within the community was born from the desire of the people to better their community, to rethink their country. An NGO that came from elsewhere was not created with this characteristic community-based vision. Today there are many NGOs working with public policy that we don’t agree with. I think they’re wrong because the role of the NGOs is to change public policy and examine public finances. When (an outside) NGO is carrying out public policies, I get confused. Today you no longer know who is the government and who is civil society, it’s all very mixed. So, this mixture is bad because it isn’t regulated, and because there is no (proper) collaboration…

[Another issues of the times…]  If they don’t have dignified salaries, how will residents pay their electricity bill or their water bill? I have 12 relatives who live close to me who sold their houses for R$40,000 four years ago when things were more complicated. Today, a home in Cidade de Deus costs between R$120,000 and R$180,000. So, with time, my worry is that a person who was born in Cidade de Deus, who grew up in the favela and is essentially everything that I am, will not be able to stay here.

ROW: In your opinion, what are some areas of Rio society that deserve more attention from the government?

IO: I think education. I consider myself to be an activist for education. I can’t say I believe in these courses for 15 or 20 days that are happening. The federal government is putting so much money in education without quality. They just want the numbers, right? So, you see lots of short-term courses today. And with all this stuff regarding the UPP, there are courses taught in the community but none with any substance. If you don’t have a quality education as a child, if you don’t have proper primary education, you won’t go to university.

ROW: In your opinion, what should the government change to improve the city?

IO: I think the city is being sold. She is being sold to a bevy of businesses and now everyone is buying their piece, their lot. There are all these public works projects that are going against many people, removing homes and years of history. Many people in the city center are seriously suffering from the selling of the Port zone, also known as the “Marvelous Port” project. The Port will be marvelous for everyone except the people who (currently) live there, right? That area is surrounded by favelas, favelas with history where thousands of people will be evicted. I think that you can have local development, not with economic development, but with human development. If you think about only economic development, what will happen here is what happened in the United States, what is happening in many other countries, that financial interests are put above humanity and the environment. We are an instituion that works with socio-environmental education. I believe there is nothing more important for the government to be concerned with than its people and the environment. 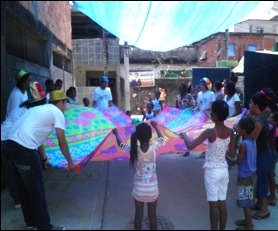 ROW: There is a prejudice that people who live in low-income communities are ignorant or easy targets for clientelism, what would your response be to someone who thinks that?

IO: This is the discourse of the mainstream media. The mainstream media makes this up because it needs to in order to survive… The motto of Alfazendo is to always say, you are doing this, but you can do it better. We don’t sell the misery of the favela, we sell the quality of the favela. I am quality, I am an organic intellectual. I didn’t go to university, my educational career wasn’t the typical day to day in school, I read a lot, I studied a lot. I need to go to university, but I don’t have the money to go. Alfazendo never had funding, we never have large funders, we always had collaborators.  So, I never saw a reason to stop everything I was doing to dedicate all my time to going to university, and to pay for it when I don’t have the money to pay for it. But, I think this a created prejudice that people continue to believe because it’s easy to just talk and believe this prejudice when you don’t live day to day in the community. Cidade de Deus was abandoned for almost 40 years by the public sector. If there hadn’t been social movements, CDD would be much worse off than we are now. We found a way to deal with the trash, the people have a right to running water, the people have a right to everything. When people live outside of the communities, it’s easy to talk like that. Alfazendo works with a local team; here we have educators, biologists, social workers and psychologists. There are young people who have gone to university outside the community and then returned here. I have a team of 16 young people who are taking courses or who have already finished secondary school, all of whom have knowledge that many people who went to university don’t have. So what they say (the mainstream media) is made up, it is not the truth.

IO: I’m already 46 years old, so my fight today is to form the younger generation. Alfazendo is not coordinated by Iara, I’m a coordinator, but I’m not the coordinator. The most important fight in our community is being recognized as normal people.