In 2022, Black July, an international movement dedicated to the fight against militarization, racism and apartheid, organized its seventh edition. Founded in 2016 by mothers and family members of victims of state violence, as well as favela movements from throughout Brazil, Black July works with social movements around the world that experience the consequences of the militarization of society. 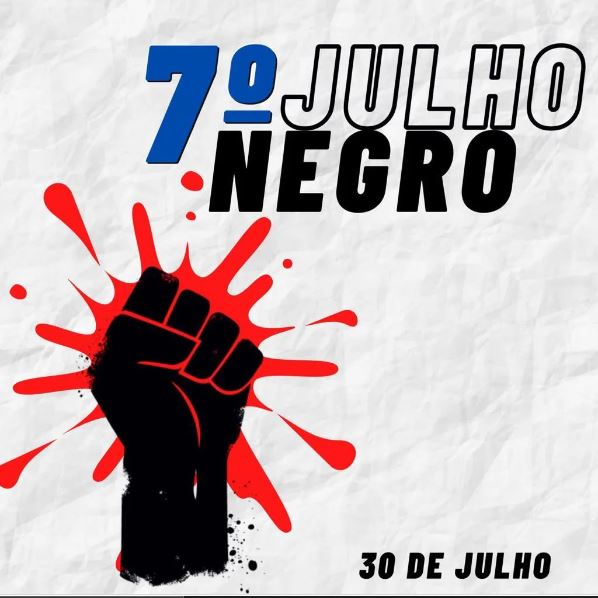 A shorter version of the event was organized for 2022, as the social movements that typically organize Black July have been involved in direct actions in their respective territories, as a result of the rise of militarization in Brazil.

For its seventh edition, Black July organized a debate centered around the seminar “Women in the Struggle Against Incarceration and the Police.” The topic of the debate spread to Brazil’s current political situation, reviving events and memories from other political periods, as well as positions on the upcoming October elections. The event took place on Saturday, July 30, in Casa Palafita at Salsa e Merengue, one of the 16 favelas that make up Complexo da Maré, in the North Zone of Rio de Janeiro.

The seminar was hosted by four women activists dedicated to causes connected to militarization and who belong to various social movements: Gizele Martins, a member of the Maré Mobilization Front; Giselle Florentino, a member of the Right to Memory and Racial Justice Initiative; Monique Cruz, from Global Justice; and Patricia Oliveira, a member of the National Network of Mothers and Relatives of Victims of State Terrorism. In addition to the speakers, several representatives of favela collectives and organizations, as well as favela residents, were present.

7th Black July: The Favela Wants to Live!
On Saturday, 30 July, at 2pm, we held a roundtable: women fighting against incarceration and the police, at @frentemare as part of the 7th Black July. In conversation, we spoke about militarization, massacres, incarceration, but also about how favelas have suffered with increased hunger, following Covid-19, unemployment and that we can only get through these state attacks together, conceiving a society fit for all our peoples.

In a brief account about her life and the impacts of militarization on her childhood, Gizele Martins shared how this was fundamental in defining her professional path.

Martins emphasized that the favela where she was born and raised is a diverse, active, and culturally fertile space:

“The favela I know has music, culture, street barbecues, noise, passing cars and motorcycles. It has occupations and mutual solidarity. It has community education, college prep courses, memory and community-based communication. It has life and joy… but it also has the State, which terrorizes it.” 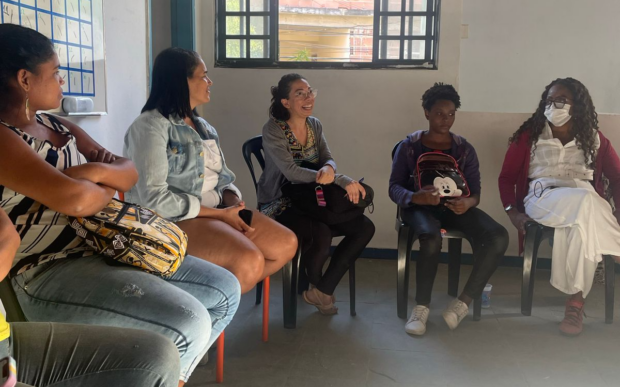 After everyone present introduced themselves, Martins spoke about the space they were in. Casa Palafita is a community occupation inside a deactivated health center. The Casa arose from a movement that furthered the actions of the Maré Mobilization Front, organized at the beginning of the pandemic with a focus on community-based communication. It has since expanded its work, helping families across Maré by distributing food, personal hygiene items, cooking gas cylinders, and other supplies to the community’s most vulnerable residents.

In 2021, there was a significant decrease in donated food and personal hygiene items. Given the easing of the pandemic, the Maré Mobilization Front opted to work in a slightly different way. The Front launched the Front Kitchen, a community kitchen that distributes packed meals to Maré residents. Vanusa Borba, Front Kitchen’s coordinator, explained where the ingredients for the meals come from:

“Our meals are produced from donations from other organizations and crowdfunding from individuals and businesses. We were able to keep that going until recently, until the end of May. Now, our partnership with Fiocruz—the project’s main donor—is almost over, and we are looking into how we can continue.”

Next, Fransérgio Goulart from the Right to Memory and Racial Justice Initiative spoke about the history of previous Black July editions, contextualizing that the event always addresses racism, apartheid, and militarization beyond the traditional conceptions of skin color seen in Brazil, presenting international perspectives on these concepts:

“Black July addresses racism, apartheid, and militarization. Some people from the Brazilian Black Movement would ask who were those people from other countries speaking about these issues. Because, in Brazil, when we’re talking about racism, we’re talking about the black and indigenous populations. In other words, the way we understand people from other countries by their skin color alone was sometimes wrong. But I think this description of racism is important. We sometimes see a lighter skin-tone Palestinian and we say ‘no, do they really experience racism?’ So, we’ve been building on this process [of promoting understanding].”

Patrícia Oliveira followed after her colleague, reflecting on the country’s current situation from the perspective of the upcoming elections. “We’re seeing more of our agenda being brought forth by other people,” she evaluated, pointing out that historically these same political actors have been in the opposing camp to the favela movements. Oliveira recalled the past of certain candidates and warned that no one should be politically naive, but that strategic options need to be made at the ballot box.

Continuing on the theme of the national elections, Giselle Florentino focused on the debate surrounding the popularization of far-right politics, which uses social networks as a platform for political propaganda:

“Nobody wants to sit down with people to build something permanent. Nobody’s interested in that because it doesn’t give them likes on social media. As if likes could define voting issues…they [the people] are attracted to arguments that are easy to grasp. People feel included by this talk of security, protection, the conservatism of the family, the good citizen. This narrative really touches our people.”

The seminar continued with the active and ample participation of attendees, sharing their perspectives on the upcoming elections, their consequences and impacts on a regional level, within the favelas and peripheral territories. It is important to understand that these territories have always been marginalized and constantly experience negative interferences on the part of the State, which impacts the lives of all residents.

The 7th Black July has been essential for keeping us attentive and aligned. It feeds and reestablishes networks of support and solidarity, which are only becoming more necessary. As Gizele Martins summarized: “Black July is our opportunity to discuss ways of transforming everything that we experience.”

Juliana Pinho is a resident of Nova Holanda, one of the favelas that make up Complexo da Maré, and has a degree in both Social Sciences (UFRJ) and Journalism (UCAM). A popular communicator and community mobilizer, Pinho co-founded the Maré Mobilization Front, is a member of the Palafitas Agency, and is responsible for management and planning of the For Her project. Currently, she manages NGO Fight For Peace‘s portfolio.