Last Saturday afternoon, March 9th, people mobilized around the issues of housing and the Right to the City met for a symbolic “Hug the Quilombo das Guerreiras (Women Warriors’ Quilombo)” event at 49 Francisco Bicalho Street, Santo Cristo, in the Port region of Rio de Janeiro. Throughout the afternoon and evening, there were musical, photographic, and video presentations plus delicious soups prepared by residents and drinks and barbequed meat on sale to raise money.

Among the musical attractions of the day were DJ Castro, El Efecto, Repper Fiel, PH Lima, Banda Macumbia and Banda Corisco. Photographer Álvaro Riveros presented his exhibition ‘All of this is Ours’ along with the launch of the short film ‘Women Warriors’ about the occupation from the point of view of some of the female residents. 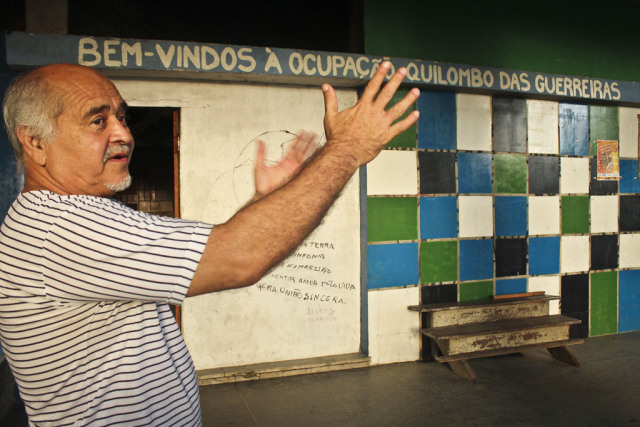 Marvellous Port, except for the people

The Quilombo das Guerreiras urban occupation has been home to dozens of families over the past seven years since they occupied the Rio de Janeiro Docks building, which was abandoned over twenty years ago. Since then, they have brought new life to the building and its surroundings, where the increase in activity has led to an increase in security. Families organize themselves collectively in meetings and work groups, improving parts of the building and maintaining public areas such as the library and the urban agro-ecology garden.

However, these strides have been threatened by the ‘revitalization project’ hitting the Port region, especially the five Trump Towers of up to 50 storeys now planned for the site. This immense real estate undertaking–”the nation’s largest commercial real estate complex” according to Mayor Eduardo Paes–will be built on the same grounds as the families of the Quilombo das Guerreiras occupation. Construction is set to start in the second semester.

Mr. Rodrigues recounts coming from another occupation, in Nova Iguaçu, feeling threatened after seeing five of his fellow occupiers die. He does not believe in the process employed by the current government. “They are not taking into consideration all of our autonomy, this is absurd beyond belief.”

Zé Ramalho lists the various struggles they’ve faced in the building. Often they are without running water, electricity, or the power to step outside for fear of the lookouts of the Docks of Rio de Janeiro waiting to come in and block residents from re-entering the premises. Zé does not look well upon the intended works and says if he could testify personally to the authorities, he would say: “You do not understand how much we have fought for this place, we are not criminals, we want decent housing, nothing more. The building should have been renovated for us to live with dignity, filled with all these projects for children and women (that we have established).”

Iracy and Nilde, residents since the first day of occupation go further. Iracy, for example, says she does not have an appropriate place to live and that she simply wants to continue to live where she is accustomed to feeling part of a community working in solidarity with others. “It is here, with this family, everyone respects each other, with no one feeling better than anyone else. We are all on the same page here, it is the rest of the world that is out of touch, but they see it as the other way around.”

Nilde says that the Quilombo das Guerreiras occupation has never been able to count on help from the authorities. The residents have made numerous proposals for projects and investment to turn the location into more than just a building in which to live, one that encourages the vibrant culture and arts that already exist there. She is visibly emotional expressing herself, saying, “We don’t want to live for free, of course not, because we know that in this life nothing is free. We want the government to give us the conditions to afford somewhere to live… That is what’s important for all the members of the Quilombo.”

Nilde says that sometimes she checks house prices, but the values are absurdly high and impossible for any current resident to pay. In São Gonçalo (a neighboring municipality outside of Rio de Janeiro), houses are valued at between R$30,000 and R$75,000.

As such, the residents of the Quilombo das Guerreiras, and all the people even remotely involved in the process are revolting. It is striking how the government of Rio de Janeiro favors one type of carioca (resident of Rio) and simply ignores the existence of the large mass of those in less favorable economic conditions. The situation is repugnant, cruel, without dialogue and without provisions for residents’ future accommodations. They are lives being thrown aside openly, for all the world to see. And what’s more, many people in less favorable economic conditions, like those at the Quilombo das Guerreiras occupation, will be cheering as the ball heads into the net, screaming “goal!,” deceived but happy, though none of this is their fault.