For the original report by Alessandro Lo-Bianco in O Dia in Portuguese click here.

Inaugurated less than a year ago, and the apple of Mayor Eduardo Paes’ eye, the neighborhood receives families evicted from many locations in Rio de Janeiro, including from risk areas.

Families that have been removed from risk areas to Bairro Carioca, located in Triagem in the North Zone, lost everything again during the flood that hit Rio de Janeiro Tuesday, March 5th.

The public housing project built with resources from the federal program Minha Casa, Minha Vida (My House, My Life) is full of leaks and cracks. Houses on the first floor were waterlogged, to residents’ despair.

“The biggest risk is right here. I lost furniture, appliances, clothes and food. My house is an embarassment and my life has lost its meaning,” says a shaken Lidiane Conceição, 27 and ex-resident of Morro do Borel, also in the North Zone. 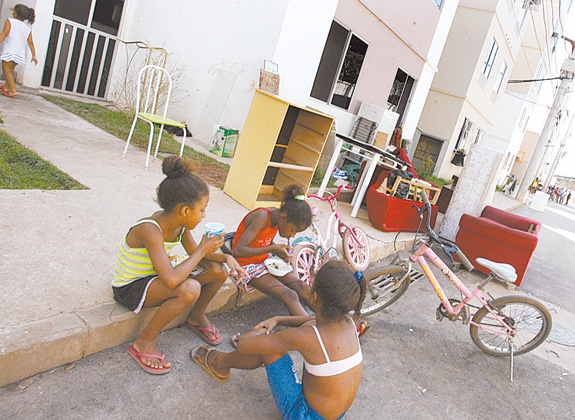 Causes of the flood

According to the condominium’s manager, Rogério Nascimento, the flood affected 64 apartments on the first floor, occupied by elderly and disabled people that cannot take the stairs. He argues the flood was caused by works by Fundação Rio-Águas. Part of the site has been constructed on top of the Cunha Canal.

“Rio-Águas is carrying out works which has led to a reduction of the flow of canal water, which is rising through the drains. The work was supposed to take six months, but it has already been going on for a year,” Nascimento criticized.

A collapse at the sight of the garbage

Wheelchair user Sirlene Silveira, 33 years old, is sleeping on the floor, next to pools of water. “I need them to move me from the first floor so I don’t drown. But how am I going to go upstairs? This is already the third flood. The water rose a lot. If the residents had not rescued me, I would have died,” said the paraplegic, scared.

Despair also struck Helena Nóbrega’s family. Suffering from diabetes, she fainted at the sight of her belongings being carried away with the garbage. 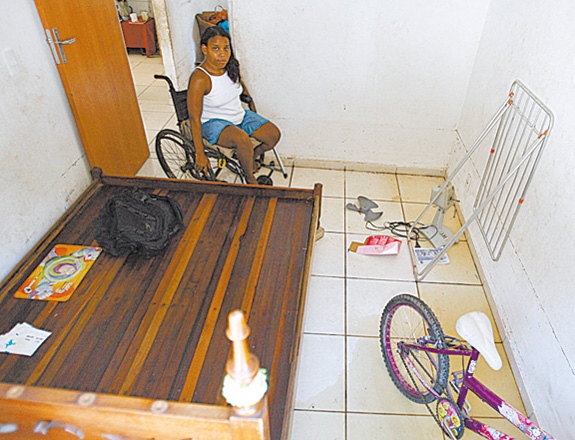 Cracks, warped doors and sewage inside the apartments

A visit by O DIA to 43 houses in Triagem found cracks in the walls and warped doors, in addition to water rising through the shower drains and sinks inundating the rooms. Leaks in the sewer are another nuisance.

There is no fire hose and the garbage has not been collected. “We chipped in to pay the garbage collection,” the manager complains. According to him, the water bill this month was R$29,000. “Water is leaking and no one does anything about it,” he claims.

Residents also suffer with violence. Without policing, drug traffickers and thugs are active in the neighborhood. Water pumps have been stolen, in addition to air conditioners from the Sports Center.

Rio-Águas claims to have invested R$31.9 million in shell-work to prevent the flooding of the Cunha Canal. The Civil Defence distributed mats. “We want the problem to be solved,” stressed the manager.