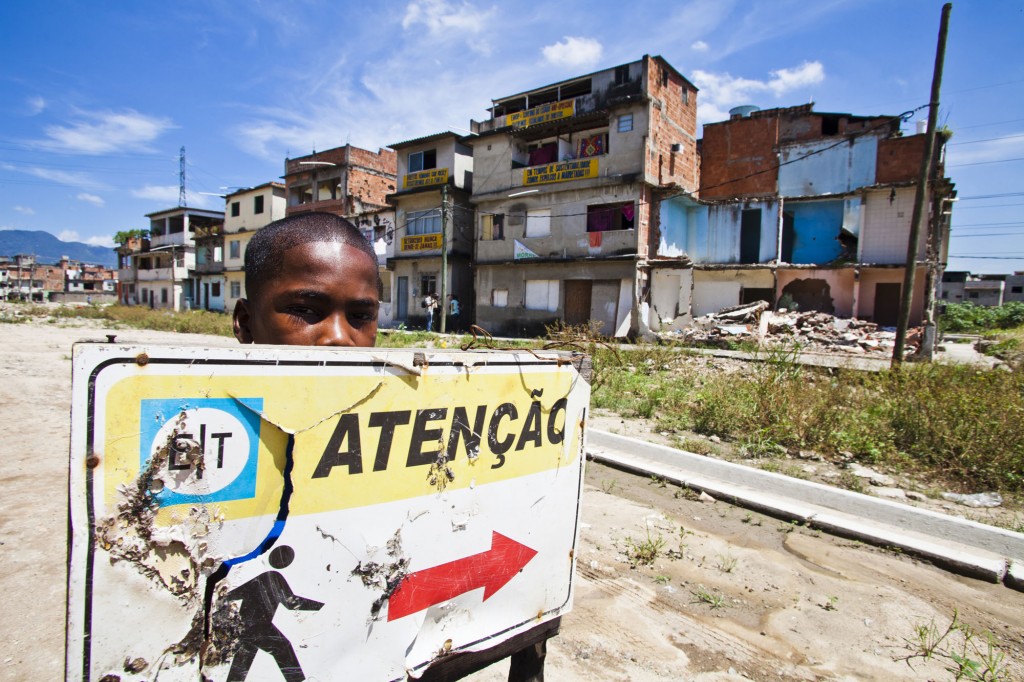 Yesterday morning, Tuesday March 13th, a demolition crew contracted by the Rio de Janeiro State government arrived at the Beira Rio community in Manguinhos in Rio’s North Zone to demolish vacated houses as part of an eviction process that has been underway for four years now. Arriving unannounced without warning residents still living in adjacent houses, cutting off the electricity supply and proceeding to bulldoze recently vacated houses without necessary official documentation, the crew’s activity was eventually halted around 3pm when residents, supported by the media presence of several journalists, called on the UPP police officers to investigate the legality of the demolition.

Yesterday’s demolition is just the latest development in a brutal, drawn-out eviction process that started in 2009, several months after then president Lula launched the Growth Acceleration Program (PAC) in the North Zone favela complex. Coordinated by the State Secretariat of Public Works, PAC Manguinhos is an upgrading program with the objective of improving accessibility, housing, health service, education, sport & leisure, culture, work & income and social assistence in the community through a total first phase investment of over R$574 million. Through the works, Manguinhos has received a new library and civic center, housing projects and train station. 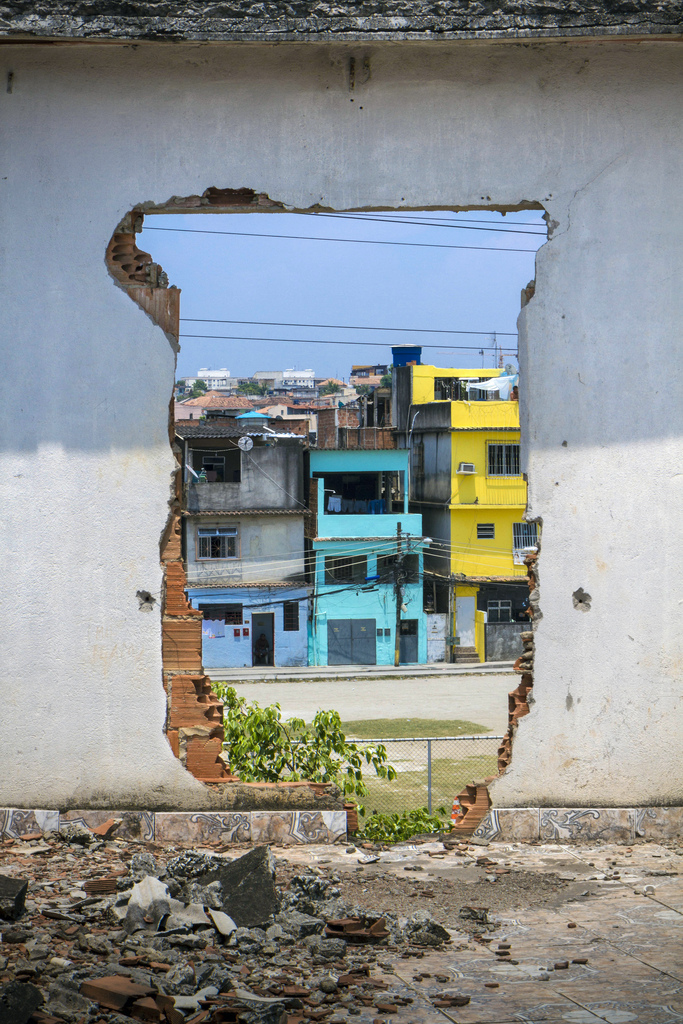 However, complaints over the implementation of the works, human rights violations and a lack of participation abound. In a recent interview, Fernando Soares, coordinator of RedeCAPP’s Manguinhos Human Rights Laboratory, said “People thought it was going to be an upgrading project for the favela… If it’s a housing and sanitation project, the beneficiaries should be the residents of the favela, but the residents aren’t asked what kind of project we want. The project is planned behind our backs and the excuses are always the same: ‘We’re changing the tire while the car is running. Either you take this now and before long you’ll get used to it, or you won’t get anything.'”

For the residents of Beira Rio, on the riverside edge of the favela close to Fiocruz health research institute and Manguinhos train station, the PAC works mean residents must lose their homes of in most cases several decades.

Vanderley Pereira da Silva, a 30-year-old student nurse and resident of Beira Rio describes how the State approached them in 2009: “They said that we have to leave, that we were invading the space, that the land is the state’s property and you have to leave for works to be done for the benefit for the general population. They went marking the houses and calling people individually to establish compensation.”

Like in countless evictions across the city, the compensation values offered to Beira Rio residents are very low. Initially residents were offered around R$6,000-R$6,500 compensation, the option of assisted purchase or an apartment in a public housing development. With continued resistance, the compensation offered has risen to averages between R$17,000 and R$30,000, however this still falls far short of the legally established and market value necessary for residents to afford an equivalent property within a 1km radius, which by law the State should provide.

In total, 900 families will be removed along the edge of the river and the site will used to build a sports center and, according to the goverment portal, a Minha Casa, Minha Vida apartment complex to rehouse the removed families, with social rent assistence while the apartments are built. However, many Beira Rio residents are rejecting the offer of an unbuilt apartment; they simply want a compensation amount that will allow them to buy a house in their community, Manguinhos. 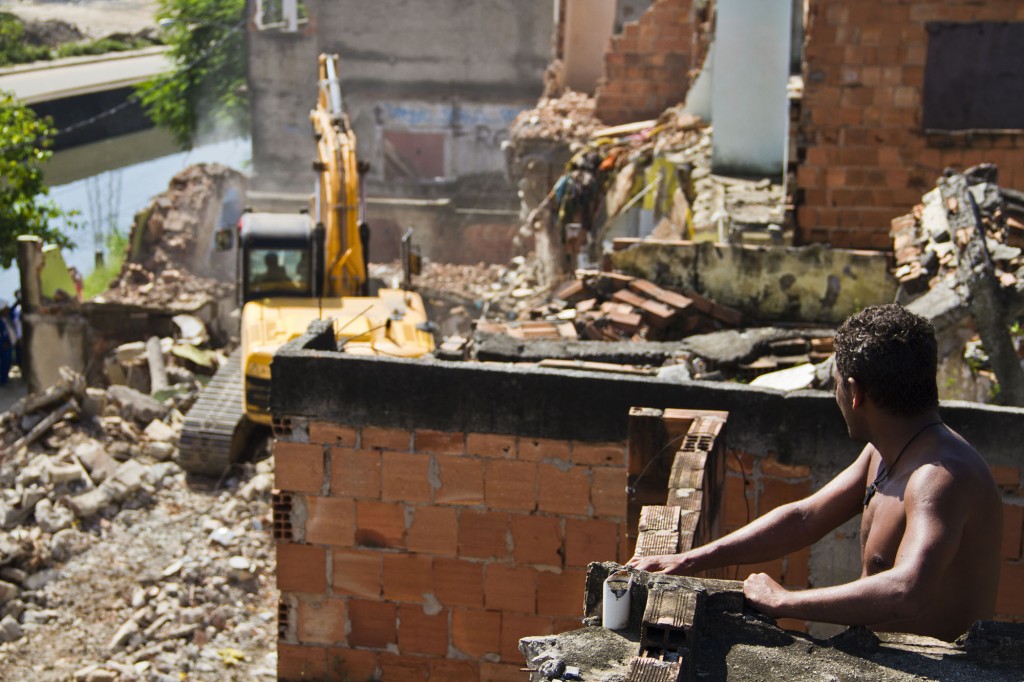 With the PAC works, military occupation and installation of the Pacifying Police Unit (UPP), house prices in Manguinhos, as in the rest of the city, have sky-rocketed. Vanderley cites houses on the other side of the river going for R$100,000 and R$120,000. Another resident saw a house nearby of 70m2 with a R$210,000 asking price. Faced with low compensation offers which would necessitate a move far away to peripheral areas with fewer public services and infrastructure, Vanderley and five other Beira Rio families are currently going through the courts to demand fair compensation for their homes.

However their resistance, now in its fourth year, means living in increasingly precarious and dangerous conditions, as demolitions like yesterday’s occur with regularity. As soon as a resident settles and vacates the property, teams contracted by the State come with sledgehammers and bulldozers to demolish the houses and leave the rubble. In this process the remaining residents’ water and electricity supply is often cut, dust fills the air, the rubble attracts dengue mosquitos, cockroaches and rats, and vacated half-demolished homes are occupied by homeless drug addicts. Residents have been without street lighting and garbage collection for three years. 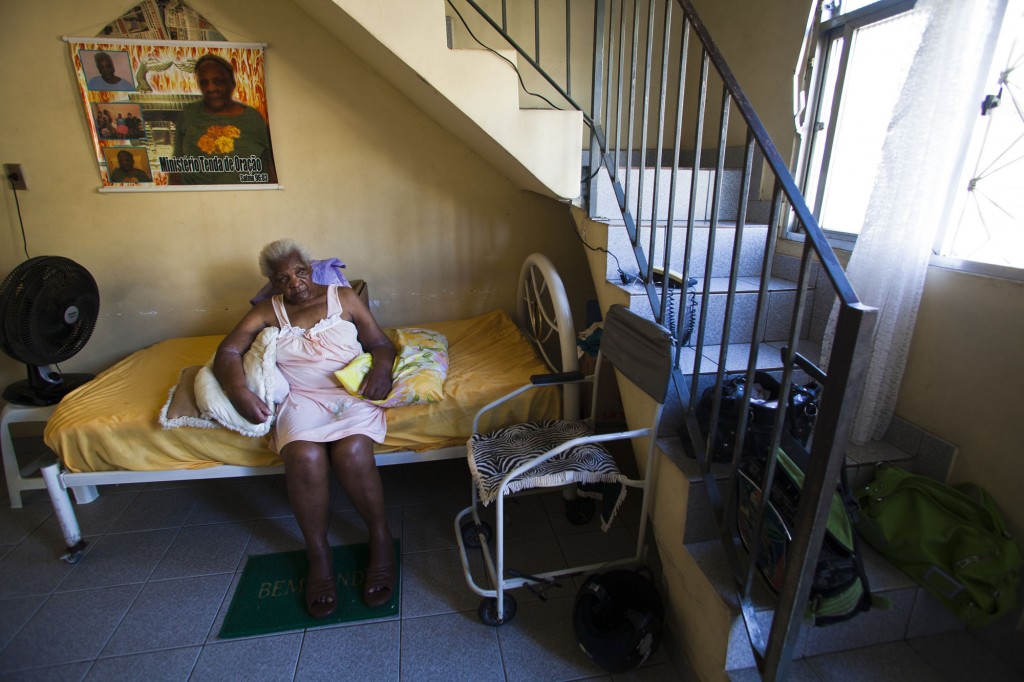 These conditions, deliberately created by the policy of demolishing houses and leaving the rubble, have led to serious health problems for residents. The constant dirt and dust caused Vanderley’s younger sister to be admitted to hospital with respiratory problems. His neighbor’s two-year-old daughter contracted bronchitis. Another neighbor’s baby has respiratory and skin problems. In a house opposite, José Ramalho, a 56-year-old bus driver and long time resident, tripped over rubble, cutting his arm and damaging the nerve endings and motor skills in his left hand. A few doors down from Vanderley, 98-year-old Dejanira was so traumatised when the sledgehammers were bringing down the houses on either side of hers that she has been bedridden and barely able to speak since.

Residents say the psychological terror is very difficult to live with.

Vanderson de Guimarães, 45, has been a resident for 13 years, living with his wife and twin daughters in a three storey house of 12 rooms, and believes the current preparations for the World Cup and Olympics to be behind the evictions. Over the noise of the bulldozer ripping a neighbor’s house down in front of us, he says: “Since this area is well situated, located between the international airport and the Maracanã stadium, they want to put make-up on it as fast as possible so that people from other countries come and think this is a wonderland. They don’t understand they’re almost expelling us from here.” 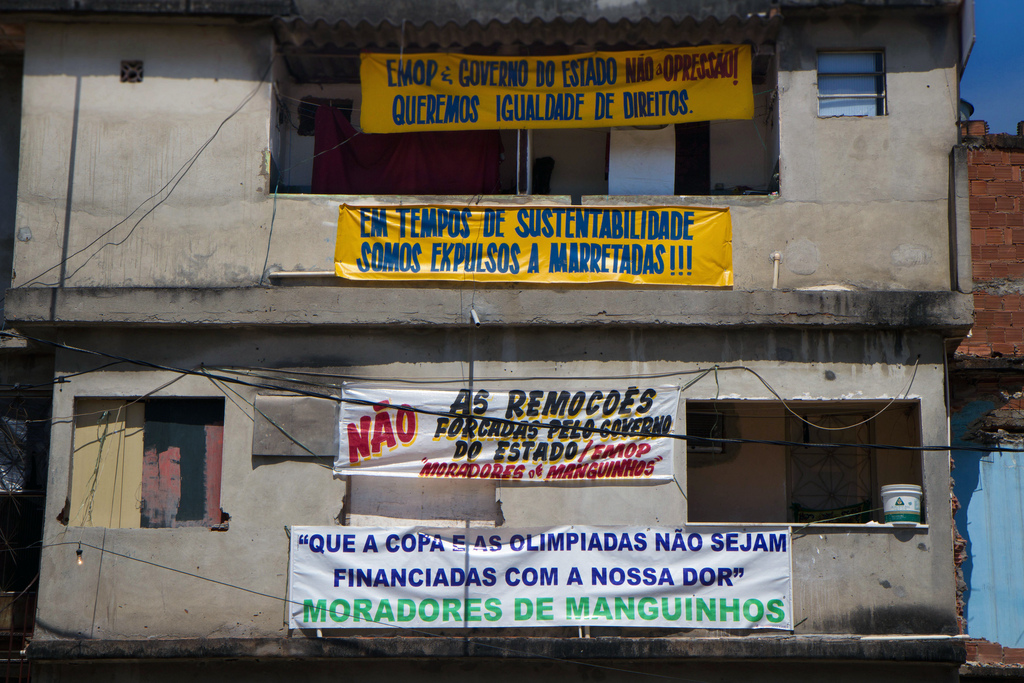 He also highlights the illegality of the State’s actions, saying “We have rights over this here. We have the right to housing that’s part of the constitution. But they go over the law… Since the politicians are going to earn a lot with the events that will happen in the city, they are going over everything and everyone.” Referring to the abysmal conditions they are left to live in, he adds, “People try to stand living like this, but the government that has the duty to protect is simply steamrolling over us.”

His neighbor and partner in resistance, Vanderley, who manages to remain calm, warm and friendly throughout the demolition, says “According to the constitution we’re all equal. I don’t have anything against the South Zone and people who live there, but I doubt that in the South Zone they’d act the same way as they do with us.” He goes on, “We’re not against the Olympics, we want rights. We were even happy that Rio was selected [to host the Games], but the way they are dealing with the communities makes me very sad.”

Photos by Luiz Baltar and AF Rodrigues from the Imagens do Povo agency.