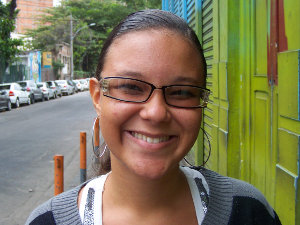 A portrait of Thamyres Gonçalves, written by Saulo Araujo, both of whom are participants in the RioOnWatch project being trained in CatComm‘s community journalism course.

A student in a local teaching school and aspiring journalist, 16-year-old Thamyres Gonçalves has a relatively quiet life compared to other girls her age. However, the responsibilities borne by this young woman from Sepetiba (in the West Zone of Rio de Janeiro) extend far beyond what others have faced.

Going to parties and dances is not Thamyres’ preference; she rather enjoys her family activities. “I’m not a big going out person, I’m more of a homebody.” The teenager, in addition to studying full time at the San Diego Normal School (for training school teachers) in Pedra de Guaratiba during the week, is pursuing a degree in Journalism, and, on the weekends, splits her time between caring for her five younger siblings and walking along the beach near her home. “I won’t say I love my routine, but I do what I do because I like it,” she says.

Thamyres is aware that assisting in the upbringing of five children is a hefty burden to carry but believes God could have given her a harsher lot. “It is better to take care of children than to deal with adults,” she says. And her task is eased by good relationships between all her siblings: “we respect each other a lot.”

Despite her responsibilities and commitments, Thamyres does not think she is precociously mature, “I don’t consider myself an adult, just a little more mature than most girls my age.” Her relationship with her mother is where she most enjoys the benefits of such maturity. “To the amazement of many, I get on very well with her,” she explains

A limited social life is not a cause for regret or annoyance to Thamyres, who admits having few friends. “I have also had few boyfriends, but each relationship lasted a long time,” she says, explaining that she does not like to just “hook-up”.

Thamyres is closely following the revitalization work on the beach of Sepetiba, and likes it where she lives. She explains that “people come here seeking to live in a quiet place.” She will often visit Brisa, Pedra de Guaratiba, Santa Cruz and Campo Grande, but would love to know the rest of the city better.

She believes it would be natural to work as a teacher upon completing her Normal course but does not see herself teaching for the rest of her life. “I chose journalism after several vocational tests and also because I am very interested in seeing other places such as those outside of the city.”