For the original by Isabela Marinho in Portuguese in G1 click here.

Rio de Janeiro State Public Security Secretary, José Mariano Beltrame, announced last Friday, January 24, that the next regions to receive the Pacifying Police Units (UPPs) will be (four or five as yet unspecified) municipalities of the Baixada Fluminense, and São Gonçalo, in the Greater Metropolitan Region. 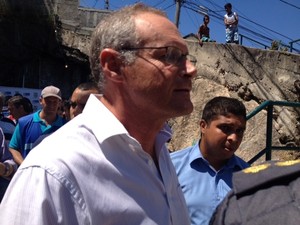 “Today we will initiate a series of measures like this one. We are going to the Baixada and Niterói. The moment has arrived for the Baixada and São Gonçalo to be considered for these operations,” affirmed Beltrame.

The announcement was made during the inauguration of the newly installed police detachment at Praça Seca in Jacarepaguá, in the West Zone of Rio, where residents have been complaining about the increase of violence since last year.

According to Beltrame, the new UPPs should be installed by the end of this year’s first semester in time for the World Cup 2014, in which the final game is scheduled to take place at the Maracanã Stadium.

There will be four or five UPPs in the Baixada Fluminense and one in São Gonçalo, in addition to six or seven police detachments in the Baixada region. When asked if Niterói and São Gonçalo will have specific units, the secretary stated that, “the cities are practically adjacent, when attending to one, you have to attend to the other.”

In relation to the gunshots in Pavão-Pavãozinho on Saturday, January 18, the secretary of Public Security said that around 30 Military Police officers, in addition to BOPE (special operations battalion), patrol the area.

Beltrame stated that a ‘rolezinho’ (little outing) is not a crime and that he will maintain police enforcement on the beaches at weekends.

A Change of Civil Police Chief

The secretary thanked Martha Rocha’s professionalism as chief of the Civil Police. The chief officer will leave her position on January 31, as reported by G1 last Thursday, January 23.

UPP in Maré is postponed

Due to the change in schedule of the UPPs’ installation, the occupation of the Maré favela complex–the next region in consideration for the project–will come later. However, Beltrame did not inform when this would specifically happen.

In an exclusive interview with G1 in December of last year, Beltrame stated that Maré would be one of the next regions to receive the UPPs and affirmed that he expects resistance from local drug traffickers.

In addition to Praça Seca in the West Zone, the secretary announced that the next neighborhood to receive a Military Police police detachment will be Pavuna in the North Zone. The operation will take place in the following days.

Regarding the exit of Civil Police Chief Martha Rocha, who is leaving her position to run in this year’s elections, the secretary affirmed that a substitute has yet to be chosen to fill her place.

The Special Operations Battalion (BOPE) undertook an operation to combat drug trafficking in the community of São José Operário.

In total, 60 police officers will play a role in the Military Police detachment, which will be operated out of a building located in Praça Seca. The majority of these agents have experience working in the Pacifying Police Units (UPPs), commanded by captain Marcio Moura Bernardo Gonçalves.

When asked about the inauguration, Beltrame stated that he “has been following the crime index in the region and in the entire state.”

“We believe that with the police presence here we will be able to create peace for the population,” said Beltrame.

Residents who live in the area relay that there are constant shootouts and say that the situation has worsened after the inauguration of the UPP in Lins de Vasconcelos in October last year. According to residents, criminals from the occupied communities fled to the hills of São José Operário, Chacrinha, and Bateau Mouche.

Furthermore, traffickers dispute the control of these communities with the militia. The BOPE has undertaken various operations in the area in order to avoid invasions from local, rival factions.