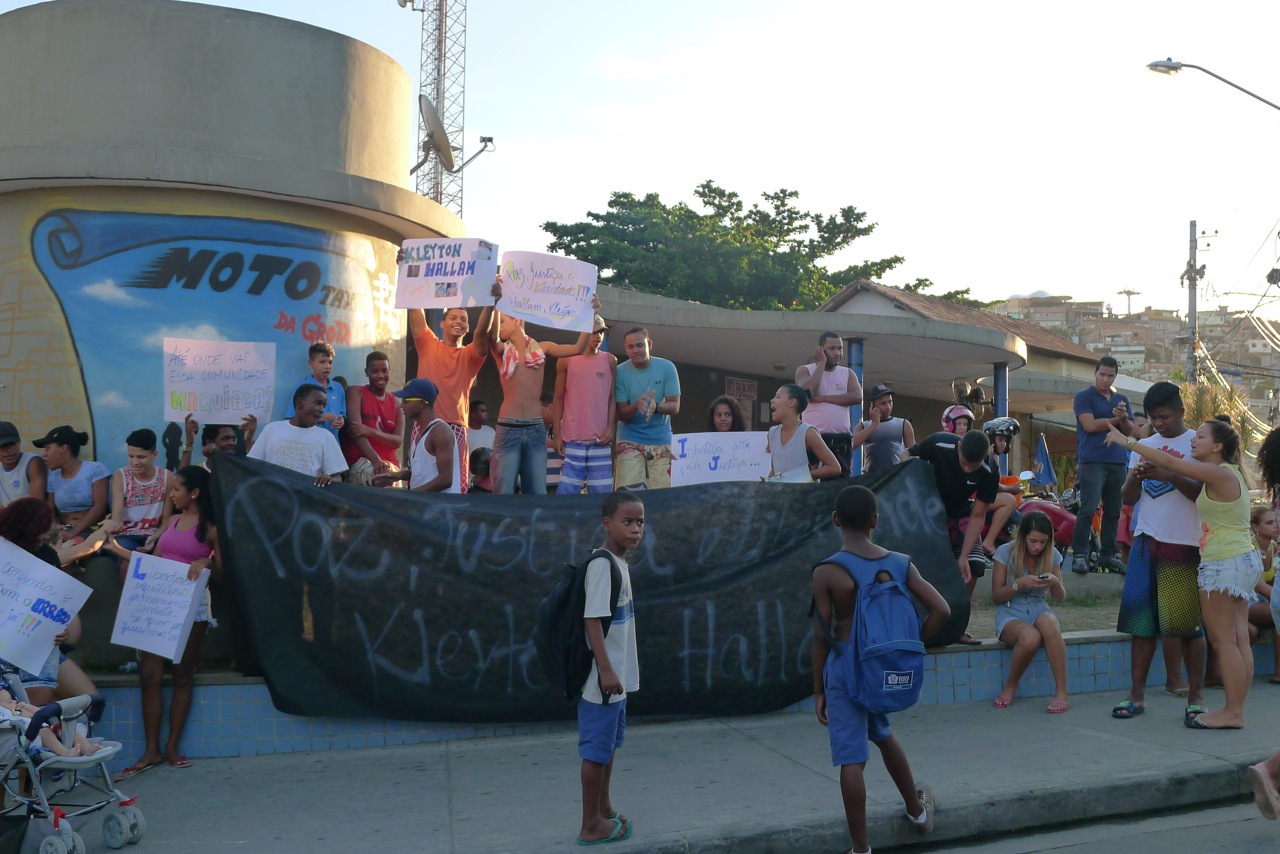 An initially peaceful protest held in Complexo de Alemão on the evening of Tuesday March 11, ended when police fired tear gas and gunshots. This escalated into an intense Military Police operation lasting several hours. The protest was organized by friends and family of two young people arrested on suspicion of involvement with the drug traffic.

The detainees, Kleyton da Rocha Afonso and Hallam Marcilio Gonçalves, were arrested the day before in an operation by Rio de Janeiro’s civil police to capture drug traffickers and suspects for the shooting and death of Pacifying Police Unit (UPP) officer Rodrigo de Souza Paes Leme on the previous Thursday, March 6. The boys had no criminal records, and friends and family of the boys denounced the arrests as arbitrary and unjust. 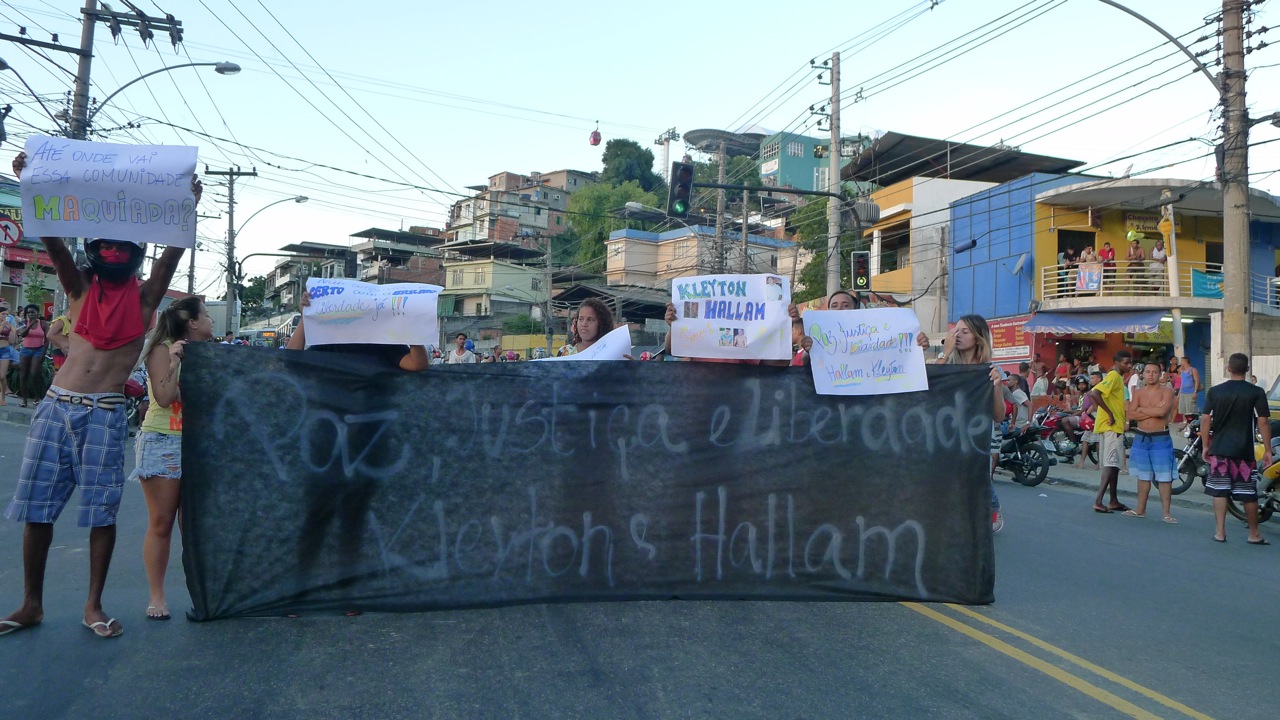 The protest began around 5pm, as a group of young people, some still in public school uniform, gathered at the entrance to the Grota community in Complexo do Alemão. The young protesters, friends of the arrested, held banners with phrases such as “Pacification or Oppression?” and “Peace, Justice and Freedom for Kleyton and Hallam.” A crowd grew, including residents of every walk of life–parents, children, garbage collectors, students–and UPP officers.

With support from mototaxi drivers, the protesters stopped traffic on the main road, Estrada de Itararé. The group of young people chanted, “Let our friend go!” as mototaxi drivers beeped their horns in support. The atmosphere was loud, but animated, and during one moment protesters sang the funk classic, ‘Rap de Felicidade’ (‘Happiness Rap’): “I just want to be happy, to walk freely in the favela where I was born…”

UPP officers formed a line between protesters and the halted traffic, and tried to convince protesters to unblock the road. Around 6pm an intense confusion began, which started with the sound of gunfire. Police fired tear gas and pepper spray into the crowd, which included children and pregnant women. Terrified protesters and onlookers ran in all directions away from the stinging tear gas, unaware of whether the bullets were real or rubber. 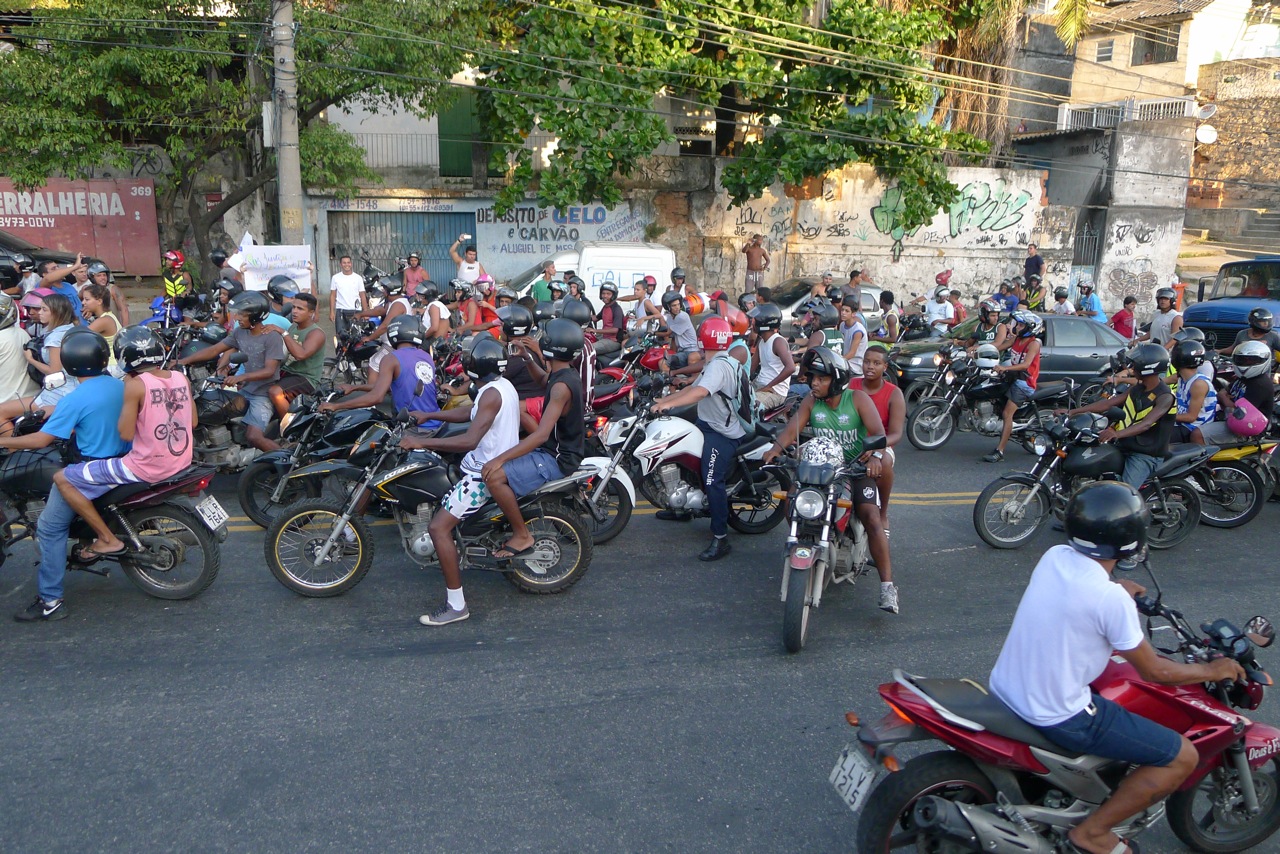 Citizen journalists, activists and other residents reported on social media as Military Police terrorized the community for several hours. Police sources quoted on the Globo site G1 claimed that a protester had allegedly shot into the air, prompting the massive operation, which included shootings throughout the community, helicopters flying overhead and ceasing of transport via road and cable car. Concerned community members reported the arrival of the BOPE (Military Police Special Operations Battalion), CORE (Civil Police Special Resources Coordination), and the caveirão, an armored tank used in violent incursions into favelas. At least two residents were injured; one youth, Rodrigo Felipe, was shot in the foot by a UPP officer using lethal bullets, not rubber bullets, as was reported in some sources. However, major mainstream media relayed events laying blame on residents and diminishing the violence carried out by state security forces.

At the very same time as the operation, residents in Barra de Tijuca, a wealthy beachside neighborhood in the West Zone, were watching the pre-screening of the new fiction film, Alemão, which dramatizes the police occupation of Complexo do Alemão in November 2010. 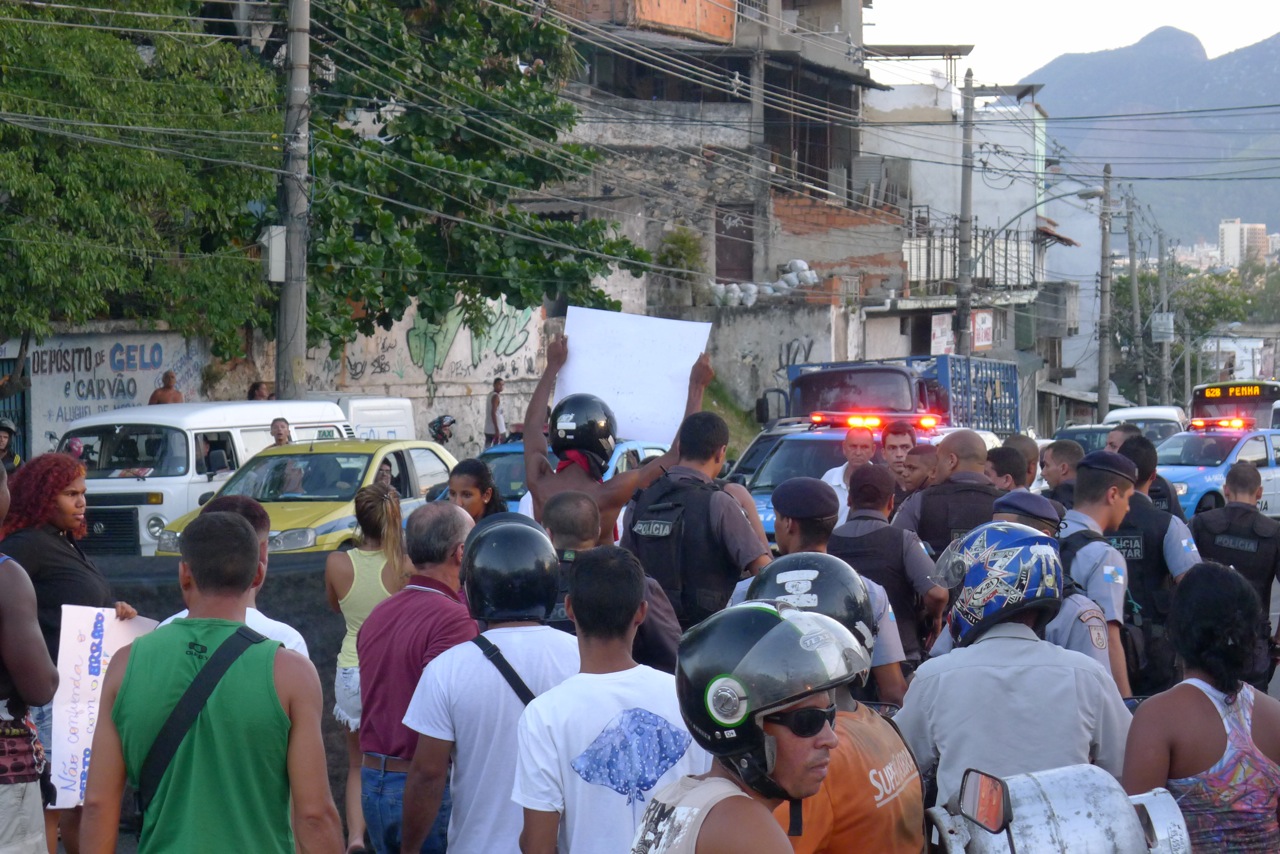 An activist from the collective Occupy Alemão, Raull Santiago, alerted on Facebook that he and many other residents had been filmed by police officers during the protest, adding that, “At this moment, various hegemonic communication channels are saying that the protest was organized by traffickers and the Civil Police is investigating the protest! They will try to delegitimize this brilliant protest, which only did not end well because of the Military Police themselves, who once again carried out abuse, violence, disrespect and cowardice.” Having received threats in the past for denouncing police abuse, activists are concerned  they will face revenge and that their critical voice is being silenced.

Complexo do Alemão was occupied by the Military Police and army in November 2010 and Pacifying Police Units (UPPs) were installed in 2012. According to Rio State Goveror, Sérgio Cabral, as quoted on the UPP website, the aim of the UPP program is: “To combat criminal groups and return peace and security to the population.” Yet the events of Tuesday night indicate that in certain favelas, far from being a peaceful and innovative example of community policing, it is a thinly veiled continuity of the violent military policing which favela residents have experienced for decades.

In the past months violence has crept back up in UPP areas, particularly in the North Zone. Three police officers and several residents have died, and human rights violations by the Military Police are regularly reported via citizen journalism on social network sites, though not in mainstream media. Rio de Janeiro State Security Secretary, José Mariano Beltrame, reacted by announcing on Sunday that he is ready to “re-occupy” the areas where pacification has been most problematic, including Complexo do Alemão, highlighting that he may call the army for reinforcement. Human rights activists are concerned about what this will mean for the 70,000 residents of Alemão’s 15 communities.

A day later, residents reported various abuses of police authority. According to resident and activist, Thainã de Medeiros, this included “various denunciations: slaps in the face, seizing of motorbikes, verbal aggression and more.”

Community activists and groups are demanding dialogue, a rethink of the UPP policy, and many call for demilitarization of the police. It was evident on Tuesday that the UPP policy is far from delivering on the promise of returning citizenship to Rio’s favela residents.

The inspiring words of an activist present at the protest summarize the night: “Before suffering cowardly attacks from the Military Police, a diverse group of residents took to the streets to demand respect, to demand for us to be able to really walk freely in the favela where we were born. Congratulations Alemão! Favela is Resistance! They will not silence us!”