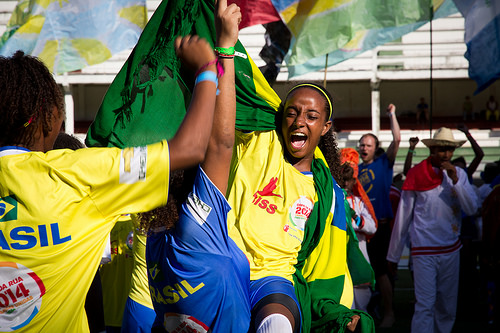 Less than a week after being named Champions of the 2014 Street Child World Cup in Rio de Janeiro, the Brazilian Girls Team returned to practice. The girls range from age 12 to 18 and come from Complexo da Penha and Vila Cruzeiro in Rio de Janeiro’s North Zone. They are all a part of the Favela Street organization which through soccer motivates and encourages girls who need structure, a safe environment and appreciation, to make and reach their life goals. After participating in the 10-day Street Child World Cup, the girls returned with energy, new friendships from around the world, and confidence to proudly say ‘I Am Somebody.’

The Street Child World Cup was hosted in Rio de Janeiro from March 28 to April 7 and brought together over 230 boys and girls from 19 different countries in a football tournament, festival arts and participatory conference on children’s rights. The event brings international attention to the global issue of youth homelessness and poverty. Each country’s team was not selected solely for foot skills on the field, but rather the players or ‘Street Champions’ were selected because they are inspiring examples of change from local organizations in each country working to fight child homelessness and street labor. The term street child in a broader definition refers to children who are connected to the streets, whether by living or working on the streets in their respective countries. Both a girls and boys team represented Brazil in the tournament; the Girls Team from Favela Street in Penha, Rio de Janeiro and the Boys Team from the O Pequeno Nazareno NGO in Fortaleza. 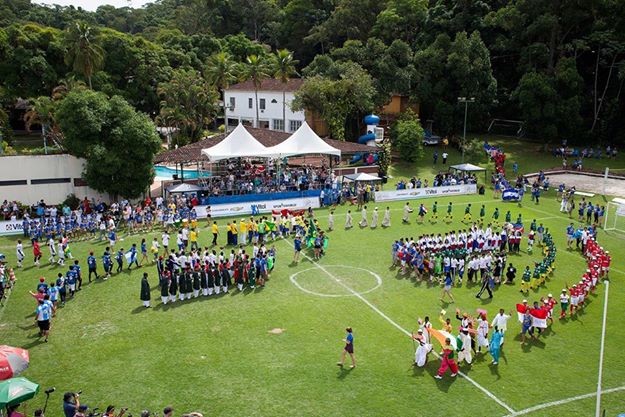 Although the players arrived in Rio ready to compete to be the 2014 World Cup Champions, this tournament enhanced the hope and encouragement soccer has already given these ‘Street Champions.’ The tournament focused on the platform that “No child should have to live on the street” to gain international acknowledgement for the promotion of children’s rights. A number of the children involved in the tournament have traumatic histories of violence and abuse related to drug gangs and police brutality. The tournament encouraged each of the players to realize they are valued, they have a future, and they are somebody. Street Child World Cup’s website states, “this group of young people are inspiring examples of how every street-connected child has a future away from the streets when they receive the right protection, rehabilitation and opportunities.”

For the Brazil teams, the campaign to promote rights for street children and to protect street children from violence took on even greater significance following the tragic death of the Brazilian Boys Team captain, Rodrigo Kelton, in February. Rodrigo was shot and killed on his 14th birthday by drug traffickers in revenge for an alleged robbery in the favela where his family lives in Fortaleza. Both the Brazilian girls and boys remembered Rodrigo throughout the week by wearing black armbands during their matches. The Brazilian boys carried around a painting of their teammate. A number of other countries also played to honor Rodrigo and all street children who have been victims of violence. 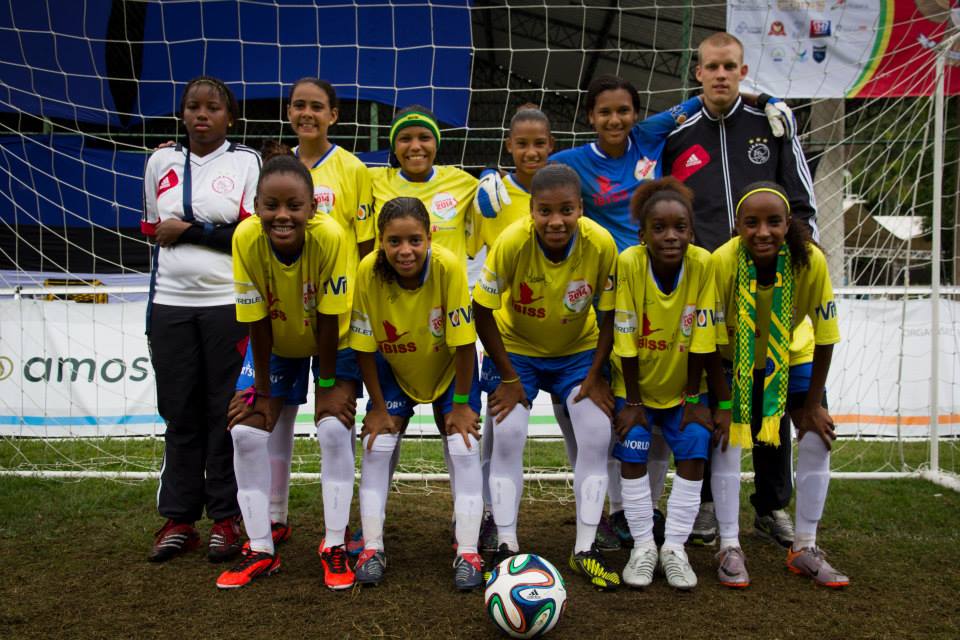 To prepare for the Street Child World Cup, the Brazilian Girls Team from Penha practiced four times every week. Jessica, a Favela Street coach who grew up in Penha, said: “Soccer makes a difference in all of our lives. It distracts us and helps a lot with our health. Truthfully, there wasn’t an event like this for girls before.” Although Brazil is known for its passion for soccer, women traditionally could not participate. During the military dictatorship, from 1941 to 1979, a law was imposed prohibiting girls and women from playing soccer as it was considered “incompatible with the female form.” Even since the fourth incarnation of a women’s league this past September, there has not been support for women’s teams. Favela Street has helped to bring girls’ soccer to the center stage. 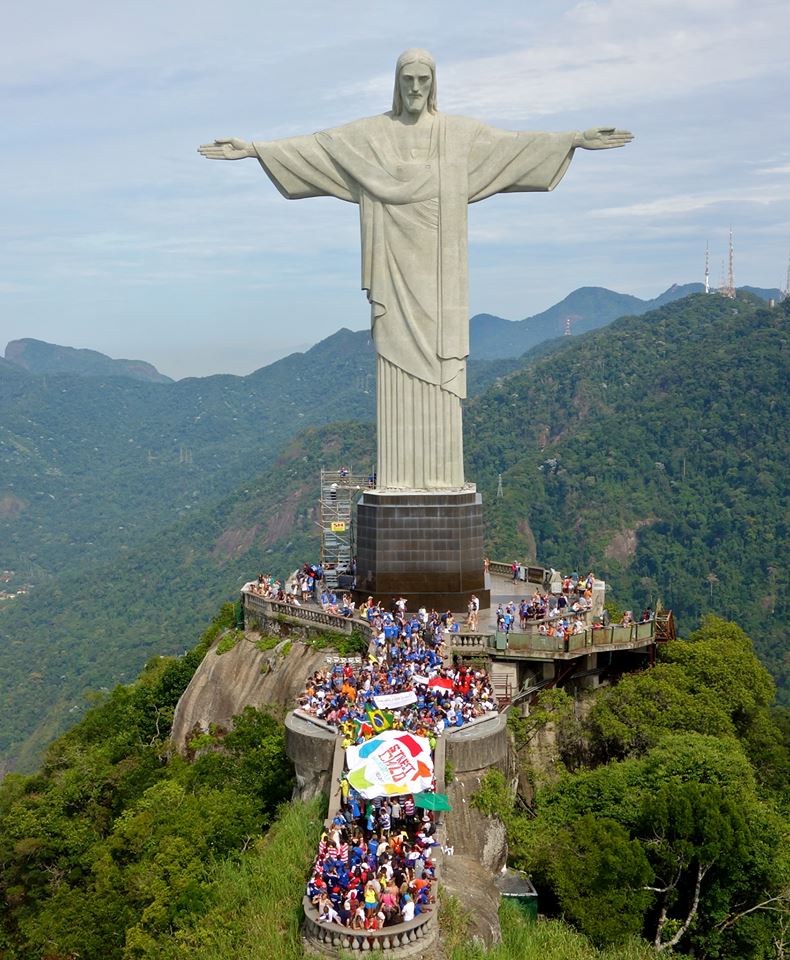 Communication at the tournament was difficult between players since most only spoke their native language. The Brazilian girls said Portuguese allowed them to speak with a few other teams including those from Mozambique and that Portuguese was similar enough to Spanish to communicate with other participating Latin American teams from El Salvador, Nicaragua and Argentina. Regardless of language setbacks, the players formed strong friendships. Brazilian Girls Team Captain, Claudiane, 18, stated, “It was hard to communicate with the other teams but still we became such good friends with them all. Everyone’s friends on Facebook now and we talk all the time.” For the Brazilian girls, one of the strongest bonds was with the girls team from the Philippines, the team they played against in the final match. Coach Jessica explained, “The hardest part of the week was the game between Brazil and the Philippines in the final. Not because of the game itself but because of the friendship our girls had with the other team. They were best friends; it was hard to play against them. Overall, it was a great game still, both sides played great. Friendship showed the meaning of the event.”

After such an exciting experience, it was hard for the girls to return to their home life. Claudiane said, “This week has been boring. I need to go to work and school again. I just want to go back. I really loved the Street Child World Cup and I already miss it and my friends.” For Claudiane, the hardest part of the week was leaving. She said, “It was really emotional, everyone was singing the Shosholoza folk song from Zimbabwe and South Africa again. We finally learned the translation on that last day which meant to go forward, go forward on this train from the mountains, that you are running away. It was a song of support and encouragement in hard times. It was so relevant and sad once we knew the meaning and it was time for us to all go home.” A significant message to all teams as they headed home was to keep moving forward, to remember they have support in difficult times, and to remember that they are somebody.

This article was written by Rachael Hilderbrand, and published on April 22, 2014.
in Civil Society, Event Reports, Interviews & Profiles