Few would have imagined in 2007, when Brazil won its bid to host the World Cup, that the controversy surrounding use of public money, corruption and militarization would have unfolded as it did. A Fifa poll showed that as much as 79% of the population felt the World Cup would make a great contribution to the country. Now, with the event unfolding, polls are showing that 61% of Brazilians think the event will be bad for the country.

Amidst the controversy, one slogan rings out above others: Não Vai Ter Copa–There Won’t be a World Cup–which began to be used in last June’s widespread protests. Yet now, even with the event upon us, this defiant call has not abated, projecting itself across social media and the streets of host cities.

Rio’s favelas, the heartland of Carioca popular–and by extension, footballing–culture, have perhaps borne the brunt of the upcoming World Cup most acutely. From removals to rising costs of living and heavy-handed policing programs, these are the places in which many of the World Cup’s social conflicts have played out. 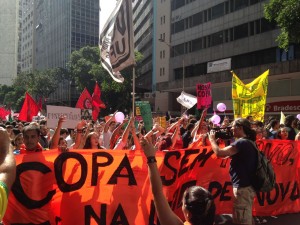 On Thursday June 12, only hours before the tournament kicked off in São Paulo, over a thousand people congregated in the center of Rio, under the moniker Nossa Copa é na Rua–Our Cup is on the Street, during one of various opening day protests across Rio.

“There are people saying that to go to the street during the World Cup is to root against Brazil,” explained the organizers. “It’s precisely the opposite. Everyone knows that the contractors, Fifa, the sponsors and some politicians will win a lot with the World Cup. The people are left out. That’s why our Cup will be on the street!”

The protest, which marched across the center, from Candelária to Lapa in around two hours, was packed and carnivalesque in mood, with diverse sectors of civil society represented. “Não Vai Ter Copa,” “Copa das Greves,” (The Cup of Strikes) and “Fifa Go Home” dominated the discourse, with a focus on striking public sector workers and groups marginalized by World Cup preparations. 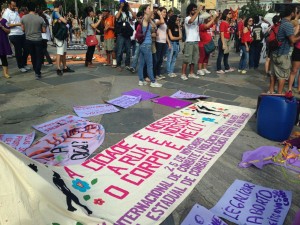 “I come for a better country, better education, and [to protest] waste in building the stadiums,” explained Oswaldo Barros, an education student from Jacarepaguá, West Zone. As a result of the World Cup Law, which enshrines Fifa’s commercial interests in Brazilian law, “Brazil has been turned into a colony of Fifa,” he continued.

There were various favela movements present, from Ocupa Alemão to Favela Não Se Cala. Leonardo Souza, resident of Complexo do Alemão and participant in Ocupa Alemão, explained his motives for being there. “As a resident of a favela, it is more the question of the militarization of the favelas,” referring to the government’s controversial introduction of increasingly draconian security measures, beyond the UPPs–Alemão is currently being patrolled by BOPE officers, while Maré is being occupied by the army. Leonardo also complained about the “wastes” of the World Cup. “In Alemão we don’t have basic sanitation and we only have one school inside for 15 favelas [approximately 70,000 residents]. As for hospitals, we only have the UPA” (Emergency Treatment Unit). 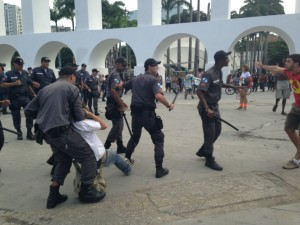 Feminist and LGBT movements were there to express their opposition to the handling of the World Cup, and its adverse effects on their rights. “This World Cup is not a World Cup for women, it actually excludes this population–women, black women, poor people, favela residents,” argued Taiana da Silva Lima, from the Coletivo Rua, speaking about the situation of women. “The lack of investment in education and health affects women more, who are responsible for finding a school for their children, [taking care of] old people, sick people.”

Yet protesters made it clear that soccer, a symbol of Brazilian popular culture, was not their target. “We are not against football, we’re against the way the World Cup is being organized,” explained Taiana.

However, once the protest settled under the Lapa Arches, violence broke out, reportedly when police attempted to arrest a protester. The situation quickly escalated, with tear gas and bombs used by police to pacify an increasingly frustrated crowd. RioOnWatch witnessed excessive force on the part of Shock police officers, with protesters unnecessarily hit and kicked once arrested. 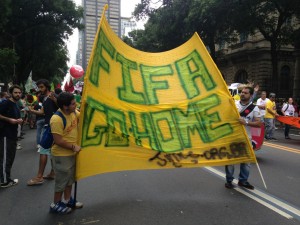 The controversy about the upcoming World Cup has reverberated well beyond the streets, with much of the debate playing out across social media. #NaoVaiTerCopa, #NaoWorldCup and #CopaPraQuem hashtags are reproduced every few minutes as people, both in Brazil and beyond, express their frustration with preparations for the mega-event.
The campaign is being used to highlight human rights questions related to the World Cup–for example, to highlight the militarization of security: “Missiles Installed on Apartment Buildings to Protect FIFA’s World Cup, 200,000 Troops Deployed #NaoVaiTerCopa,” read one frequently retweeted post. “Enjoyed [the] game of football?! Now let’s get back to the reality outside the stadium #CopaPraQuem #NaoVaiTerCopa,” tweeted @TheBlogPirate along with pictures of violence and brutality in the protests.
Favela voices have been active across social media, organizing protests and resistance to injustices committed in the name of the World Cup. “The party in the stadiums is not worth the tears in the favelas,” wrote residents mobilizing to attend Thursday’s protest, alongside pictures of home demolitions. The Maré Vive collective called Brazilians to protest, writing that “With so many ‘missed shots,’ Brazil cannot be the champion. We want education, health, work, security, the right to life.”

The World Cup That Won’t Happen

Ultimately, as the World Cup unfolds, and slogans such as #NaoVaiTerCopa move from the realm of the literal to the poetic, it captures a sentiment that many in Brazil feel: their excitement and hopes for the tournament–the return of soccer to its symbolic home–have been dashed. The World Cup they once dreamed of hosting has been soured by exposure of the corruption, waste and greed that have been at the core of preparations. Yet protesters must continue to emphasize that the problems are bigger than a sports tournament: as unpleasant an organization as Fifa might be, it is a corrupt political and social system, where opportunism, impunity and prejudice run amok, that allows one of the champions of Brazil’s popular culture–football–to be twisted and exploited, dashing Brazilians’ dreams for the tournament.

This article was written by Benjamin Parkin, and published on June 15, 2014.
in *Highlight, Civil Society, Solutions, Violations